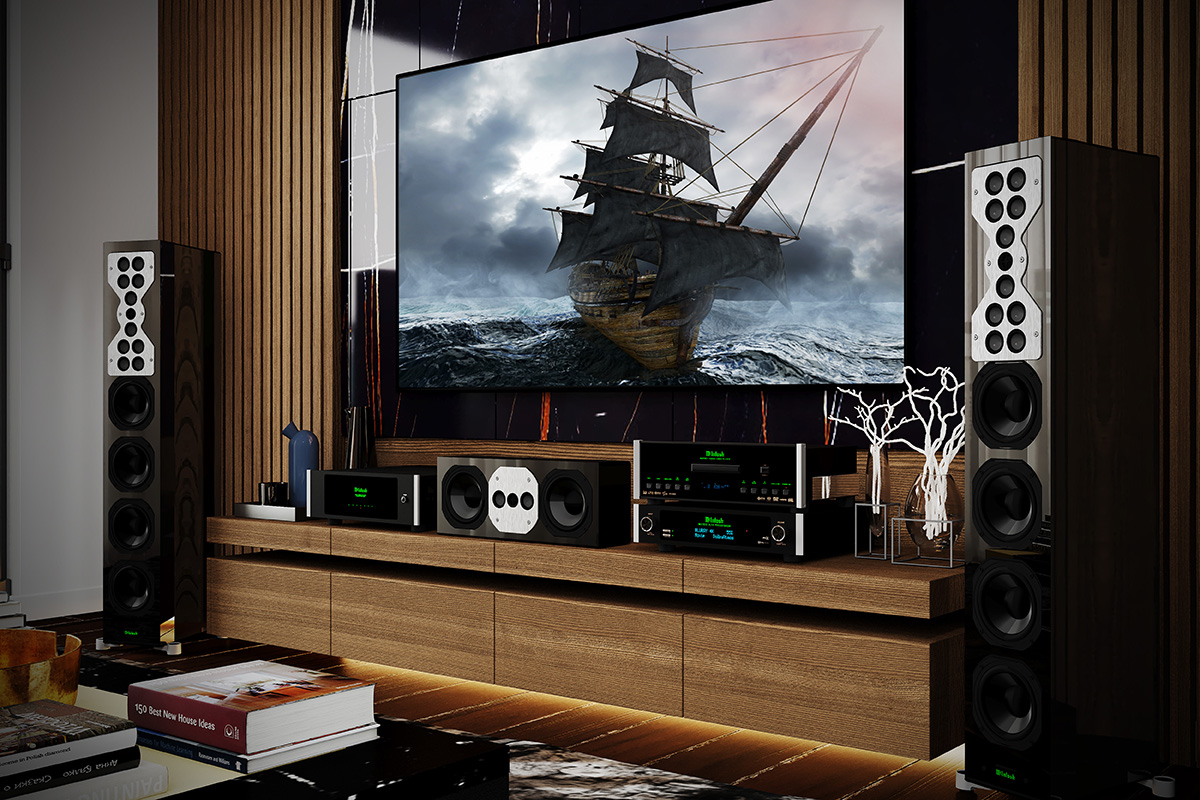 Designed to be heard more than seen, both new products can easily be mounted in a hidden or out-of-the-way A/V equipment rack - the McIntosh MX100 has a 2U height and the MI347 has a 3U height. Or if preferred, they can be paired and left out in the open for all to see and enjoy.

The McIntosh MX100 A/V Processor is designed for today's home theaters that only need digital inputs and don't require any legacy analog inputs. It offers McIntosh home theater performance in a streamlined design that gives the viewer exactly what they need to enjoy all their favorite HD and 4K programming. 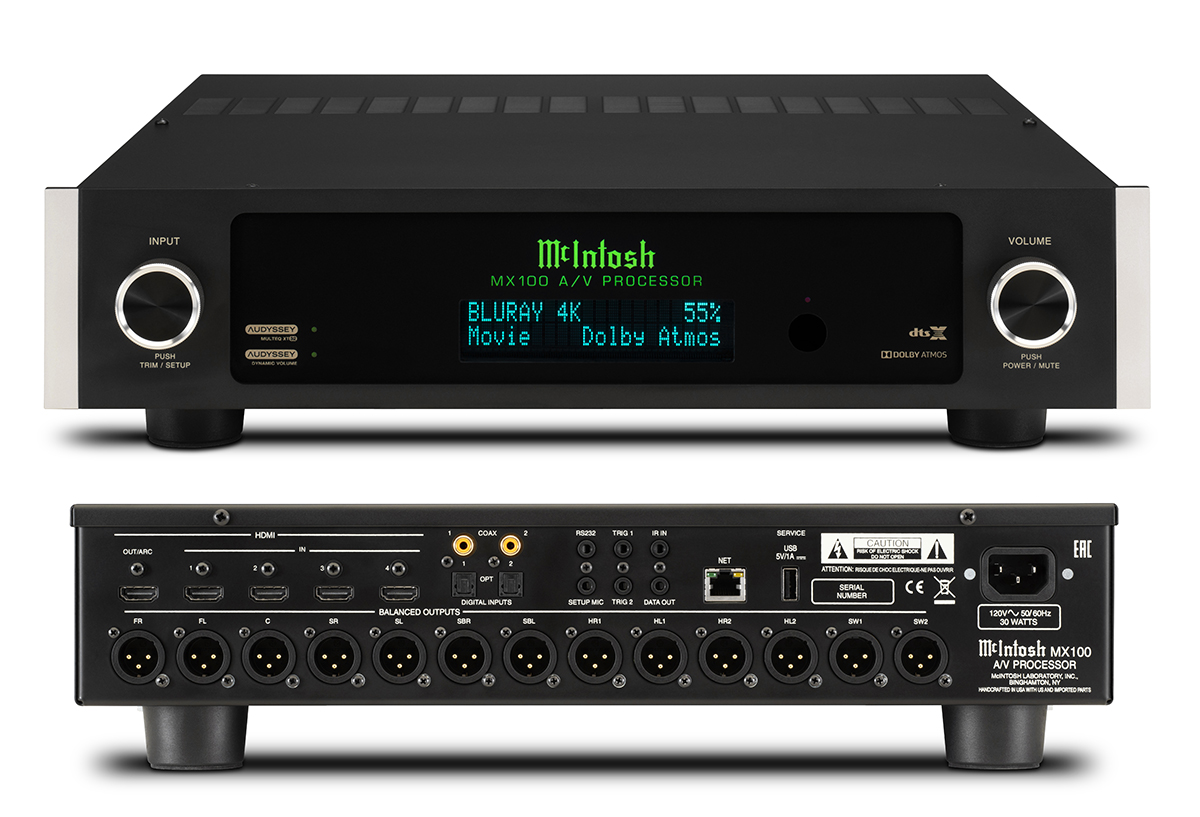 For outputting audio, the MX100 has 11.2 (or 7.2.4) discrete audio channels and 13 balanced (XLR) connectors. Seven premium 32-bit Digital-to-Analog Converters (DACs) provide high quality processing for the best audio playback. And by utilizing only balanced outputs, users can be assured of the cleanest sound being sent through the audio cables to the amplifier(s) and ultimately to the speakers and subwoofer(s).

Setup is easily performed via computer interface, and it can even be pre-configured by the installer to save on-site installation time. The configuration file can be backed up onto a computer or USB stick for safe keeping. The MX100 can be fully operated via the remote control, or it can easily be incorporated it into a home automation system via RS232 control protocol.

In a home theater, the most important audio channels or speakers are the front left, front right, and center channel speaker. These are where a majority of the dialogue and the loudest and most prominent special effects resonate from. As such, the MI347 will deliver 250 Watts at 8 Ohms or 300 Watts at 4 Ohms to each of these three speakers. The MI347's other four channels are meant to drive the still important but less power-hungry surround sound speakers. To each of these four channels, the MI347 will deliver a healthy 125 Watts at 8 Ohms or 200 Watts at 4 Ohms. 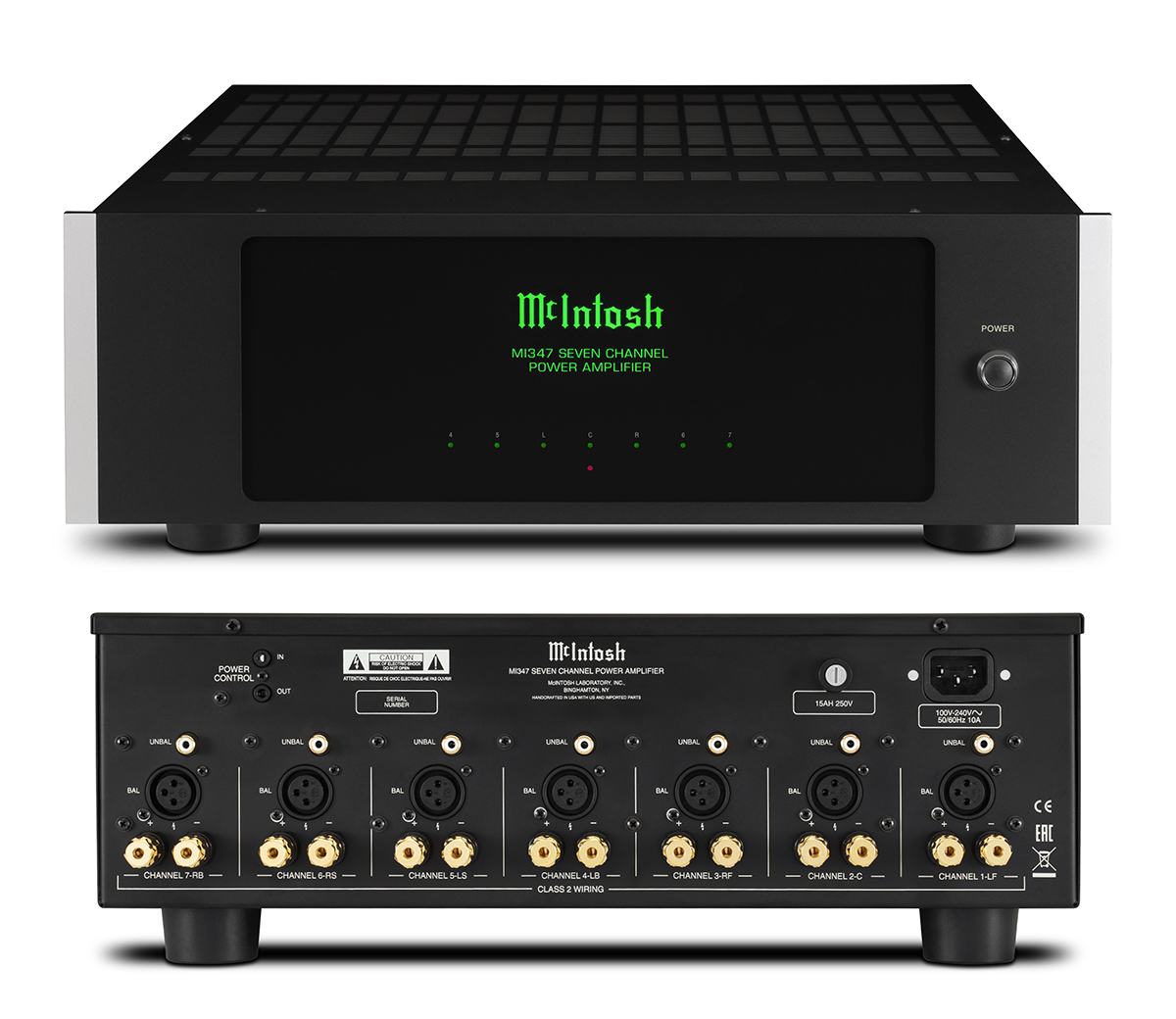 A highly efficient Class D design, the MI347 does not require noisy cooling fans to maintain nominal operating temperature; it also features an abundance of cooling vents on the top and sides to further assist with heat dissipation. On the front panel, multi-color LED indicators display the status of each channel. On the back, both a balanced and unbalanced input is included for each channel.

The MI347 is ideally suited to be paired with the McIntosh MX100 A/V Processor, but can also be used with McIntosh's MX123 and MX170 processors, or with virtually any home theater processor. If there's more than 7 audio channels in the home theater, such as with Dolby Atmos or DTS:X, McIntosh's MI254 4-Channel Digital Amplifier or MI128 8-Channel Digital Amplifier (both rack mountable) can be added to deliver McIntosh power to all the speakers.

Other MI347 features include McIntosh' Power Guard signal overload technology that prevents overdriving and damaging the speakers; Sentry Monitor short-circuit protection circuit that disengages the output stage should current ever approach unsafe operating levels; Power Control to automatically turn other connected McIntosh components on and off; and eco-friendly on/off signal sensing that turns the unit off if no input signal has been detected for a set amount of time and – perhaps more conveniently – automatically turns the MI347 on when it senses a signal from the home theater processor. 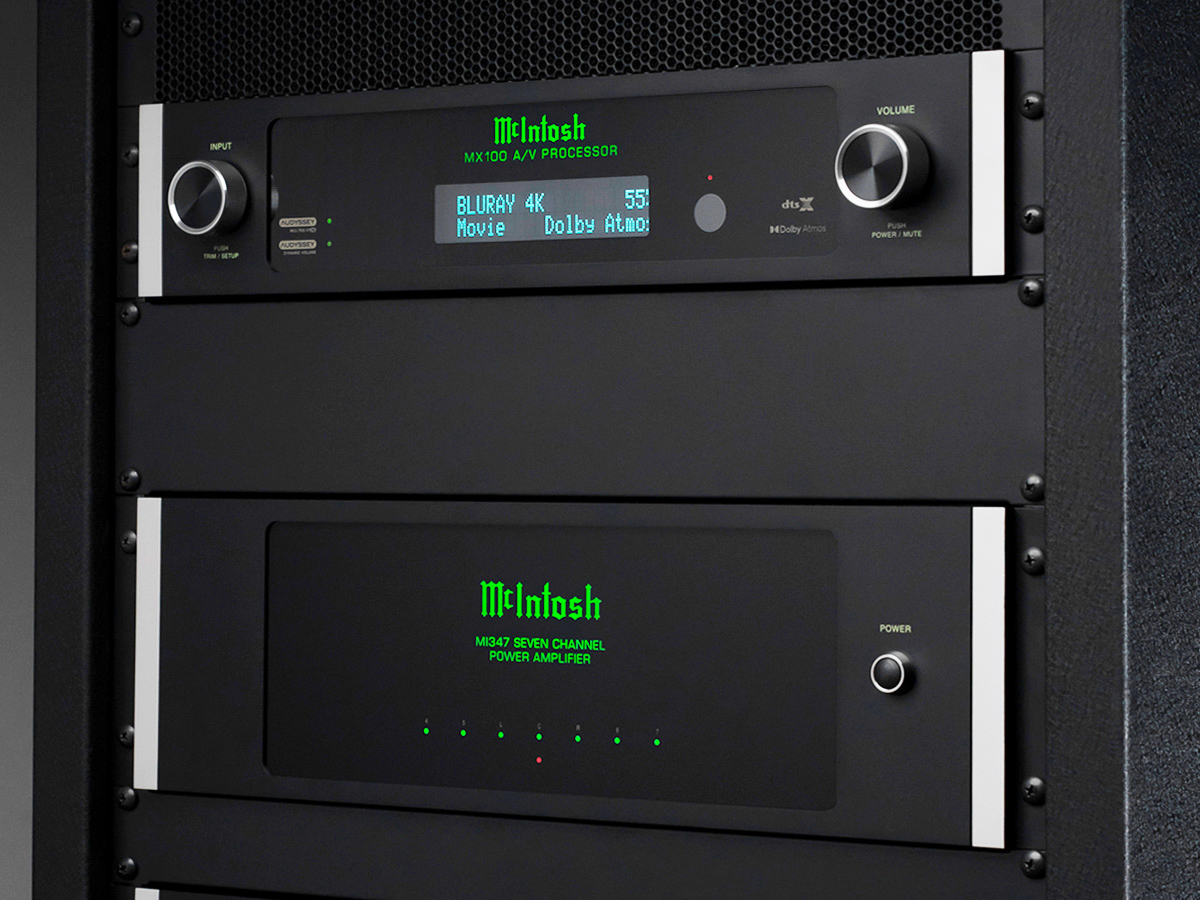 Common Features
While having streamlined designs, both the MX100 and MI347 still include many McIntosh design cues including a black glass front panel, an illuminated McIntosh logo, rotary control knobs (MX100 only), and a familiar form factor highlighted by silver trims.

Orders for the MX100 and MI347 can now be placed with Authorized McIntosh dealers with shipping expected to begin in November 2020 to the United States and Canada, and to the rest of the world shortly thereafter.

Suggested retail price for the MX100 is $5,000 USD, while the MI347 amplifier adds another $5,000 USD (VAT, shipping and any customs duties related to current standards of individual countries are excluded).
www.mcintoshlabs.com
related items