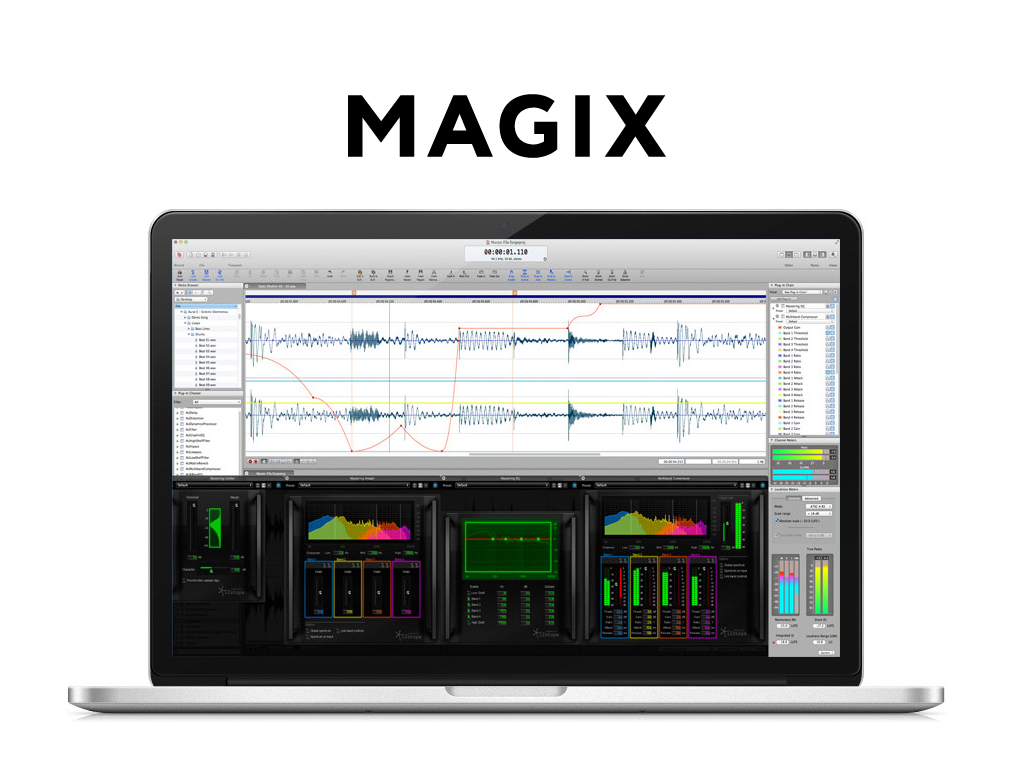 Since 1993, MAGIX Software GmbH is an established software house, with a long tradition in video, music, and photo-editing applications and mobile apps, with an important market share in Europe and already well established in the US market. The company is headquartered in Berlin and has a development center in Dresden and a logistics branch in Lübbecke, North Rhine Westphalia. Internationally, MAGIX controls subsidiaries in the USA, Canada, the UK, France, Italy, and the Netherlands.

In the professional audio community, MAGIX is highly respected by its Samplitude and Sequoia family of digital audio workstation (DAW) solutions, which it acquired from German audio company SEK’D in 1999. Since acquiring those applications, MAGIX leveraged the technology - Samplitude was the first audio software to support 24-bit recording at sample rates up to 96 kHz and was always highly regarded for the quality of its audio engine - on the multiple consumer audio and music creation products it sells, without ever compromising the development and separate market activities of these professional tools. That in itself could be a positive omen for the future of Sound Forge, ACID Pro, Vegas and all the well-known Sony Creative Software products.

By purchasing Sony Creative Software products, including the full Vegas Pro, Movie Studio, Sound Forge Pro, and ACID Pro product lines, MAGIX is further cementing its position in the market and accelerating its international growth. The recently launched SCS Catalyst Browse and Catalyst Production Suite will continue to be developed by Sony for professional broadcast and production applications.

“These products from Sony Creative Software are the perfect addition to our portfolio. We have already strengthened our presence in the United States in order to propel development and sales. This autumn, we plan to release new versions of the video-editing programs Vegas Pro and Movie Studio, which are heavily oriented toward the customer requirements of today,” says MAGIX CEO Klaus Schmidt. According to the acquisition release, MAGIX will continue to support all current SCS customers who purchased products from Sony to ensure a seamless end user experience.

The combination of MAGIX’s German software development team and the popular audio and video creation applications from the original Sonic Foundry portfolio could be interesting to follow, opening many interesting opportunities, such as the combination of its unique authoring tools. Known for user-friendly multimedia software, with over 15 million registered users, MAGIX’s product range includes seamlessly integrated online mobile and cloud services as well as digital content for both beginners and professional users.

Sony Creative Software portfolio includes popular solutions for DVD production and Blu-ray Disc authoring - DVD Architect Pro and the separate Blu-ray Disc Authoring suite, which are not mentioned in the transaction - together with Sound Forge Pro, ACID Pro, and Vegas Pro software for advanced media production. Probably the most cutting-edge audio technology is contained within the ACID family of tools - which in fact was the first loop-based music creation tool with time-stretching and pitch-shifting technologies, integrated in a full multitrack recording and mixing, and MIDI sequencing, studio production environment. Acid Loops technology - a file format containing tempo and key information for pitch transposition -  was the foundation for todays’ electronic dance music and DJ applications, and has been licensed to other companies.

Still, the most popular of these software tools remains Sound Forge Pro, in particular since it was launched also with Mac OS X support in 2012. Sound Forge Pro for Windows and Mac was continuously updated by Sony Creative Software and remained an established DAW solution, admired in particular for its advanced editing features. The latest update was announced January 2016, together with the Audio Master Suite 3 bundle for Mac and Windows, which combines also the SpectraLayers Pro advanced waveform editor and HOFA CD-Burn & DDP, a freestanding application for authoring replicator-ready DDP (Disc Description Protocol) file sets. Sound Forge Pro Mac 3 added expanded signal and effects processes, automatic audio detection and leveling capabilities, increased file format compatibility, and many workflow enhancements, while SpectraLayers Pro 4 added interoperability with AVID Pro Tools. This is the version which MAGIX will be able to quickly repackage and relaunch in the market very soon.

Apart from the ongoing reorganization Sony is going through, the sale of these Sony Creative Software assets can also be attributed to recent investments made within Sony Professional’s activities, including an increasing focus on cloud-based production and distribution services, with its Ci Media Cloud platform. The Catalyst Production Suite range of media production tools, recently updated at NAB 2016 in April, is not part of the deal announced with MAGIX and is an ideal interface for next-generation “browser-based” and cloud-based video and audio production and editing tools.
www.sonycreativesoftware.com
www.magix.com
related items