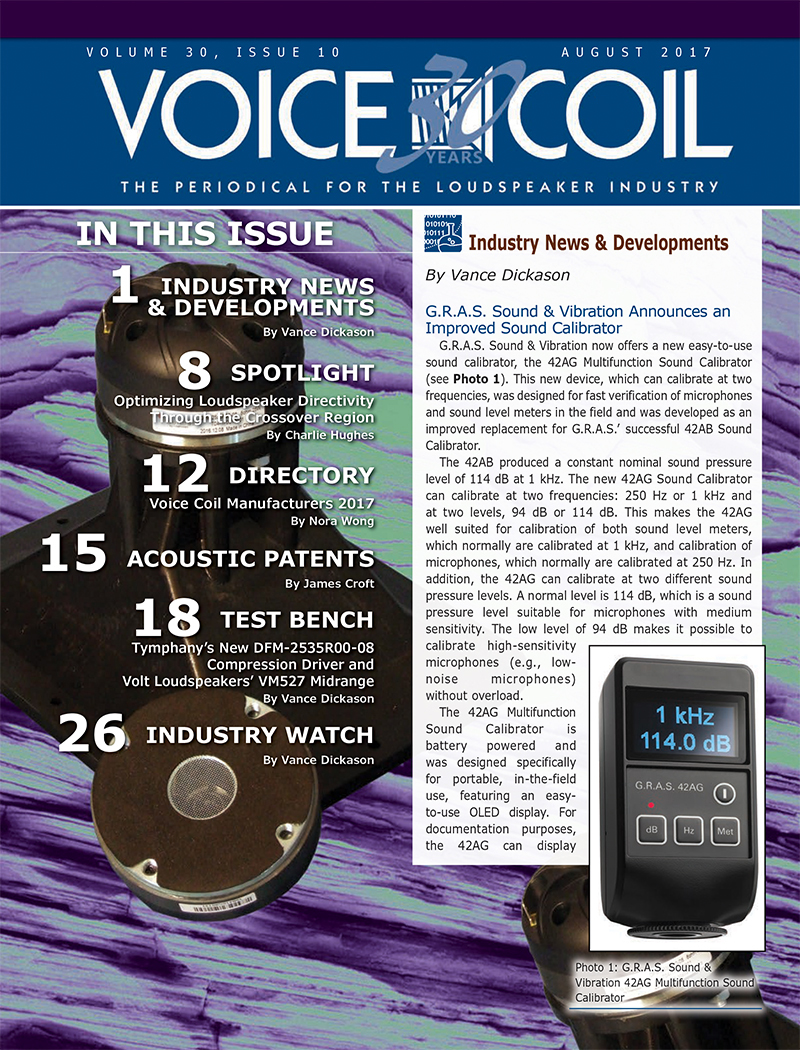 This edition of Voice Coil opens with details of the new G.R.A.S. Sound & Vibration 42AG Multifunction Sound Calibrator, a device designed for fast verification of microphones and sound level meters in the field, which allows calibration at two frequencies and at two levels, 94 dB or 114 dB. This makes the new 42AG well suited for calibration of both sound level meters, which normally are calibrated at 1 kHz, and calibration of microphones, which normally are calibrated at 250 Hz.

In Spotlight, Charlie Hughes writes about "Optimizing Loudspeaker Directivity Through the Crossover Region." As he asks, "do you know what the crossover filters are doing to the response of the loudspeaker system? Some of you might have measured the frequency response of the loudspeaker system to determine what’s happening through the crossover region. However, most designers only look at the loudspeaker’s on-axis response. It’s equally important, or perhaps more important, to know what’s happening off-axis. Let’s see how loudspeaker modeling can be used to help with this."

Not to be missed in this month's edition, Nora Wong (Menlo Scientific) compiled an updated directory of OEM/ODM voice coil manufacturers, including all the details on companies from the US, China, Taiwan, Thailand, Malaysia, Japan, India, and Europe. Get to know which companies are actual voice coil winders and which vendors are also “converters” and sell coated bobbin materials, coated magnet wire, collar materials, adhesives, and so forth to other independent coil winders and speaker manufacturers.

In his popular Acoustic Patents column, James Croft reviews a "Bass-Reflex Speaker Cabinet Having a Recessed Port" patent recently awarded to inventor Matthias Larrieu, on behalf of French company NEXO (owned by Yamaha Corp.). The abstract from that patent describes a speaker cabinet that includes at least one loudspeaker and at least one port, the port having an outlet formed in a wall of the cabinet, an inlet inside the cabinet, and a casing connecting the inlet and the outlet together, the inlet of the port further having at least one recess in the casing. This might be difficult to visualize when we want to understand what exactly differentiates the patented design from a standard bass reflex system. Basically, Larrieu created two V-shaped slices at the opening either centered or with one at each side of the port, helping to reduce amplitude and phase anomalies in the midrange due to port resonances, while improving mid-band directivity. James Croft puts it all into context.

In this month's Test Bench, Vance Dickason characterizes Tymphany's new DFM-2535R00-08 compression driver and Volt Loudspeakers' new VM527 midrange. The Tymphany DFM-2535R00-08 is the first compression driver in the company’s new three model compression driver line from Peerless by Tymphany. The DFM-2535R00-08 has a 1” throat exit diameter and a 1.4” titanium diaphragm with a polyimide surround. This is driven by a 35.5 mm diameter voice coil, wound with round copper wire on an aluminum former (ASV). Other features include a ferrite ring magnet motor structure, nominal 25 W rated power handling (50 W continuous), an injection-molded black heatsink, and solderable terminals. The titanium diaphragm is coated with a light, thin layer of unique damping material.

From British brand Volt Loudspeakers, Dickason reviews the "hot-off-the-production-line" VM527 2” midrange dome, the little brother to the company's popular VM752 3” dome midrange, a version of which we can find in the 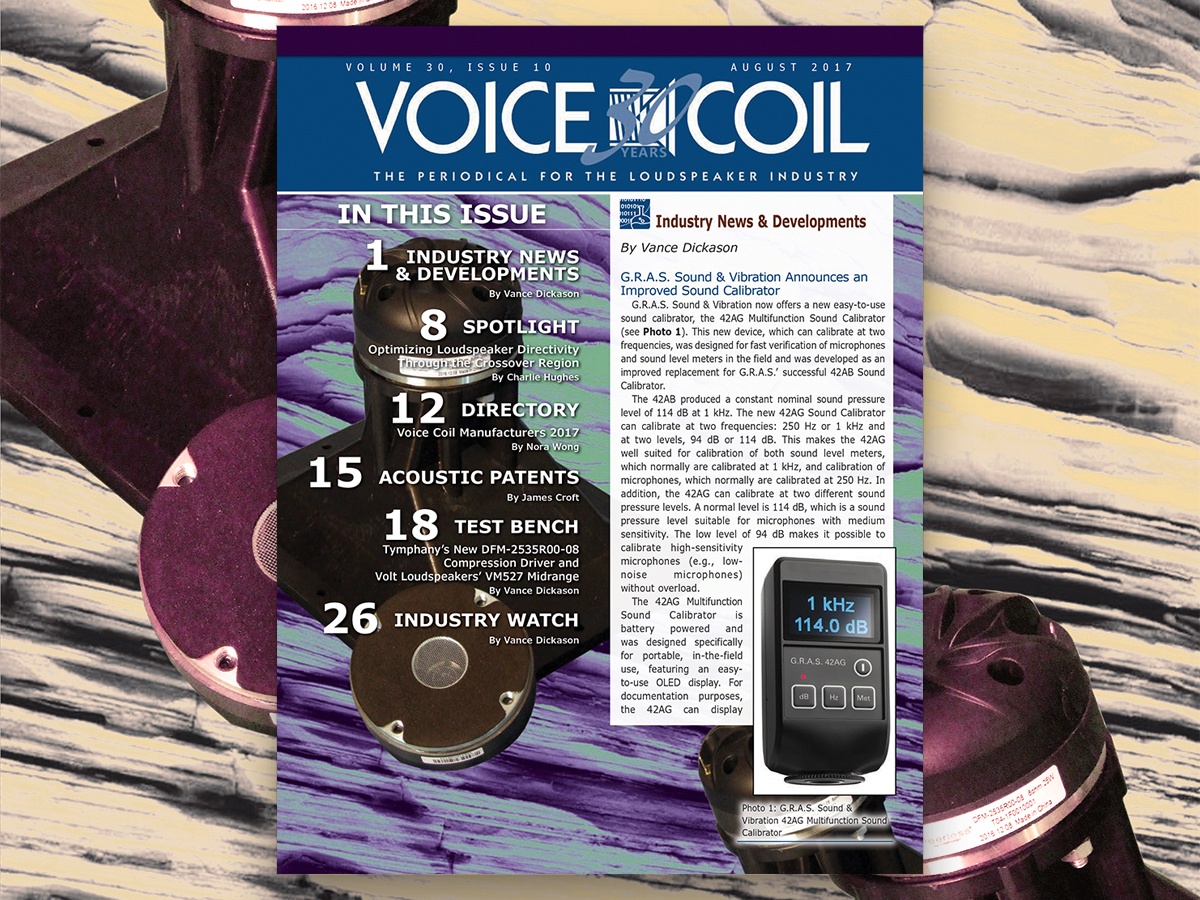 All this and the usual updates in Industry Watch make this August 2017 edition something to read and keep as a reference. Voice Coil August 2017 is now available on print and download for all registered subscribers. If you already subscribe, just go to - www.gotomyvcoil.com - to download it.