Innovation for the Loudspeaker Industry with Voice Coil December 2019 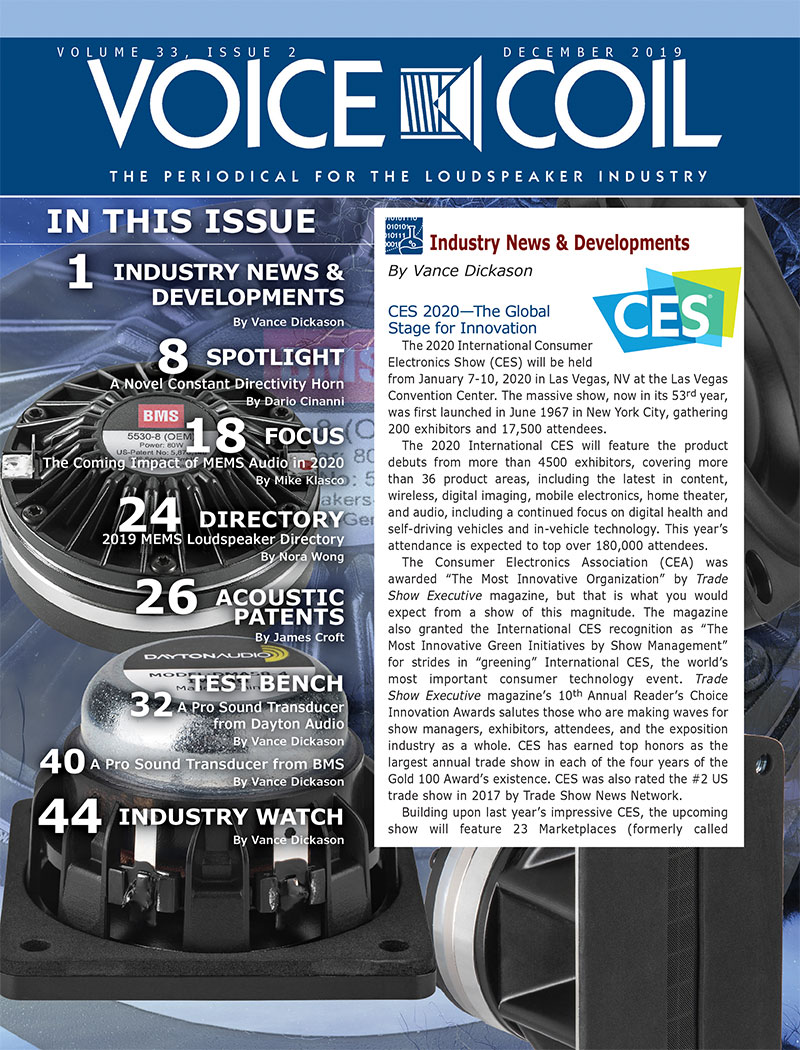 Setting the stage for another intense week in Las Vegas, NV, Vance Dickason focuses the first pages of Voice Coil December 2019 on CES 2020 - the largest International Consumer Electronics Show, which will be held from January 7-10, 2020. And as usual, this edition highlights some of the Marketplaces and Technology Zones that should be the focus of loudspeaker professionals. As usual, the Voice Coil and audioXpress teams will be spending most of their time in the Venetian suites, where a lot of speaker companies, including speaker-technology and component vendors are located. Hope to see everyone at the show!

In this edition's Spotlight, Italian loudspeaker engineer Dario Cinanni contributes a great article, which will certainly be of interest to all Voice Coil readers. Titled "A Novel Constant Directivity Horn," this outstanding article is based on an acoustic simulation study the author presented at the Comsol Conference, Grenoble (France) in 2015. In that research, a new simulation method was presented about high-frequency horn driver transducers, combining a horn simulation and a driver plane wave tube measurement. Combining only this data, using a novel equation that correlates the matrix of the virtual horn and the real compression driver pressure, it is possible to easily predict the absolute sound pressure level (SPL) of the real horn driver frequency response. The results showed a good match between simulations and measurements up to 15 kHz and the author expands on the potential applications and limitations to consider.

Voice Coil also focuses on MEMS loudspeakers. In "The Coming Impact of MEMS Audio in 2020," Mike Klasco (Menlo Scientific, Ltd.), reviews a bit of the history of the technology and previews the evolution and impact on the audio industry in general. As Klasco explains, the consumer electronics industry at-large has been able to digitize and shrink most of the device components and electronics. But one of the last remaining barriers is the speaker - it remains comparatively heavy, bulky, and restrictive. But now, microelectromechanical systems (MEMS) are promising to change all that in the largest volume applications, such as smartphones, headphones, portable speakers and automotive applications.

The article examines MEMS devices in general, provides a basic explanation of how the various types of MEMS speakers work, and what commercialization challenges are ahead. As the first MEMS speakers are now becoming viable commercial products, Klasco also discusses their practical applications, unit costs, and acoustical strengths and weaknesses.

And in the best Voice Coil tradition, Nora Wong (Menlo Scientific) complements the article with a 2019 MEMS Loudspeaker Directory.

Fortunately, Croft is well versed in the approach, having himself developed similar work since the 1970s, and is able to review the merits and potential for the new patent, explaining the implications and similar approaches that have also been patented over the years.

Finally, Dickason offers two complete characterizations of new pro sound drivers that are now available to the industry. The first is from Dayton Audio and the second from BMS.

In his first Test Bench, the focus is the Dayton Audio DMA58-4, a new 2” full-range line array/smart speaker from Dayton Audio. The DMA58 is nearly identical to the 3” version, the DMA80, which appeared in the November 2019 issue of Voice Coil magazine. DMA stands for Dual Magnet Aluminum Cone and the series already includes five models of full-range drivers, all with both 8 and 4 ohm versions. All five models have pretty much the same feature set starting with a proprietary 12-spoke injection-molded frame. This frame is very open to reduce reflections back into the cone and also has a very generous mounting flange making multiple driver arrays cosmetically attractive and compact.

The DMA58 cone assembly consists of a black anodized aluminum cone, with a 26 mm diameter convex aluminum dust cap (directly coupled to the voice coil former), and suspended with NBR and a 45 mm diameter treated cloth surround spider (damper) for compliance. Driving the assembly is a 1” aluminum vented (five 2 mm diameter vents below the spider mounting shelf and 10 more 2 mm diameter vents above it) former wound with two layers of round copper wire. Other features include a large copper cap shorting ring (Faraday Shield) that lowers distortion and extends the high-frequency SPL profile.

The second Test Bench characterizes a new BMS compression driver, the 1” 5530ND. This transducer is being introduced by BMS as a new generation of compression drivers introduced at Prolight+Sound 2019, offering a compact physical package that is only 72 mm in diameter, ultra-low intermodulation distortion ring diaphragm, and very high efficiency. Designed for use with 1” throat horns, the 5530ND has a 25.4 mm (1”) throat diameter driven by a 44 mm (1.75”) diameter two-layer sandwich voice coil wound on both the inside and outside of the Kapton former with copper clad aluminum wire (CCAW) driving a single-piece polyester diaphragm and surround. 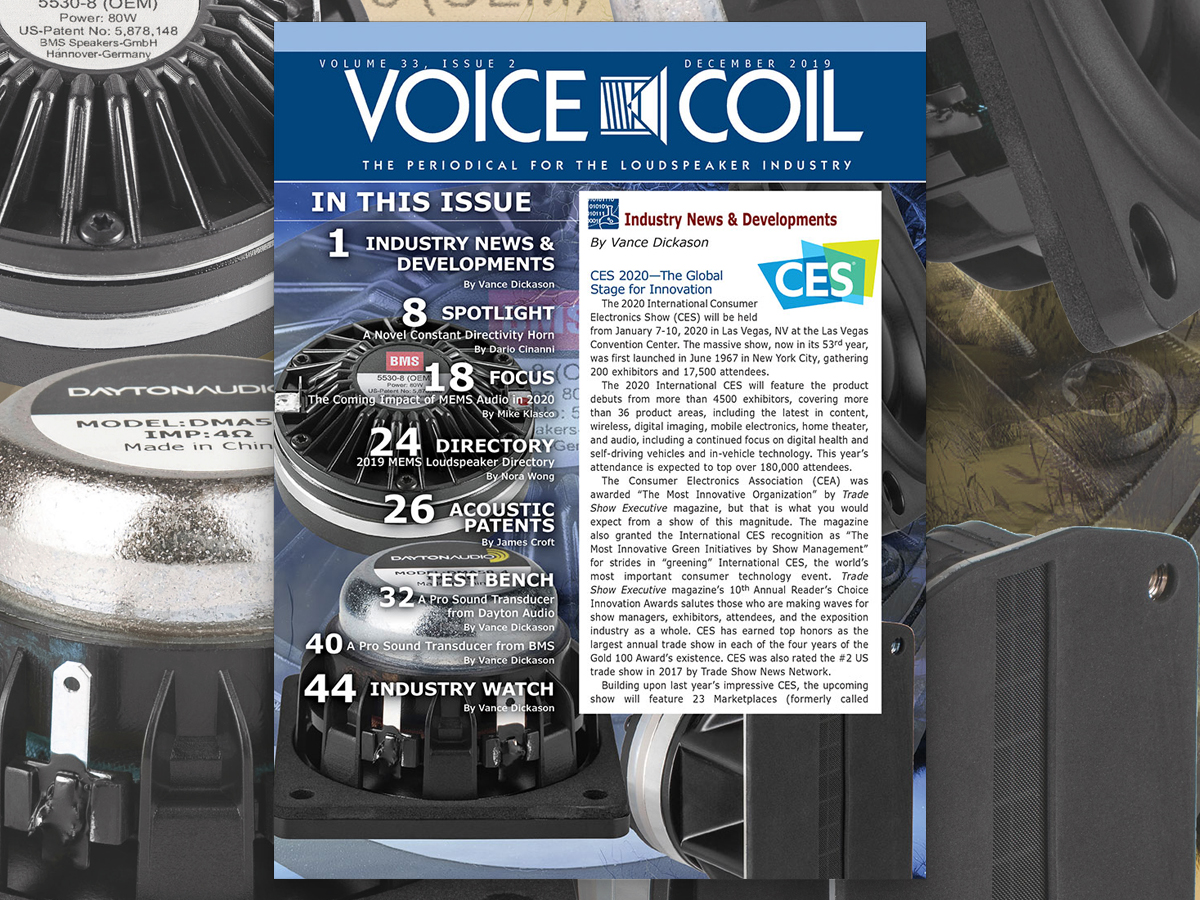 Other features include a FEA-optimized neodymium magnet motor structure, a continuous AES-rated power handling of 80 W with a peak power handling of 450 W, a 1 kHz recommended crossover frequency, and 1 W/1 m 117 dB sensitivity measured in a plane wave tube, and 113 dB measured with a 90° × 75° horn. This patented design’s designated applications include use in a high output point source, in high output line arrays, and in high output beam steering arrays. In an array with the 5530ND drivers spaced 72 mm apart, the crossover frequency can be dropped to 850 Hz, which is quite low for a 1” compression driver.

In this edition of Voice Coil there is still space left over for relevant updates in the Industry Watch section.

Voice Coil December 2019 is available for download and already in the mail for print subscribers. Subscribers can go to - www.gotomyvcoil.com - to download this issue.

Remember, Voice Coil is available in print and download for all registered subscribers, free for industry professionals. To qualify for a free subscription to Voice Coil, or renew your subscription, go to: audioxpress.com/page/Voice-Coil-Subscriber-Services.html.