IK Multimedia has created a new affordable reference in mixing and mastering software since it created T-RackS in 1999, evolving and expanding the collection while setting an industry standard for some of the world's best sounding plug-ins for professional applications. It's no coincidence that thousands of top-charting records have been made using T-RackS. Now T-RackS 5 has been re-mastered to be more powerful than ever, providing everything necessary to take raw mixes to a perfect finished product ready for digital delivery or CD duplication.

In T-RackS 5 there are now 38 incredible modules, including 4 all-new additions to the collection. The Master Match module is a new type of plug-in that automatically matches the sonic fingerprint of up to 3 reference tracks, using highly sophisticated algorithms and then applies that sound to a user's mix. 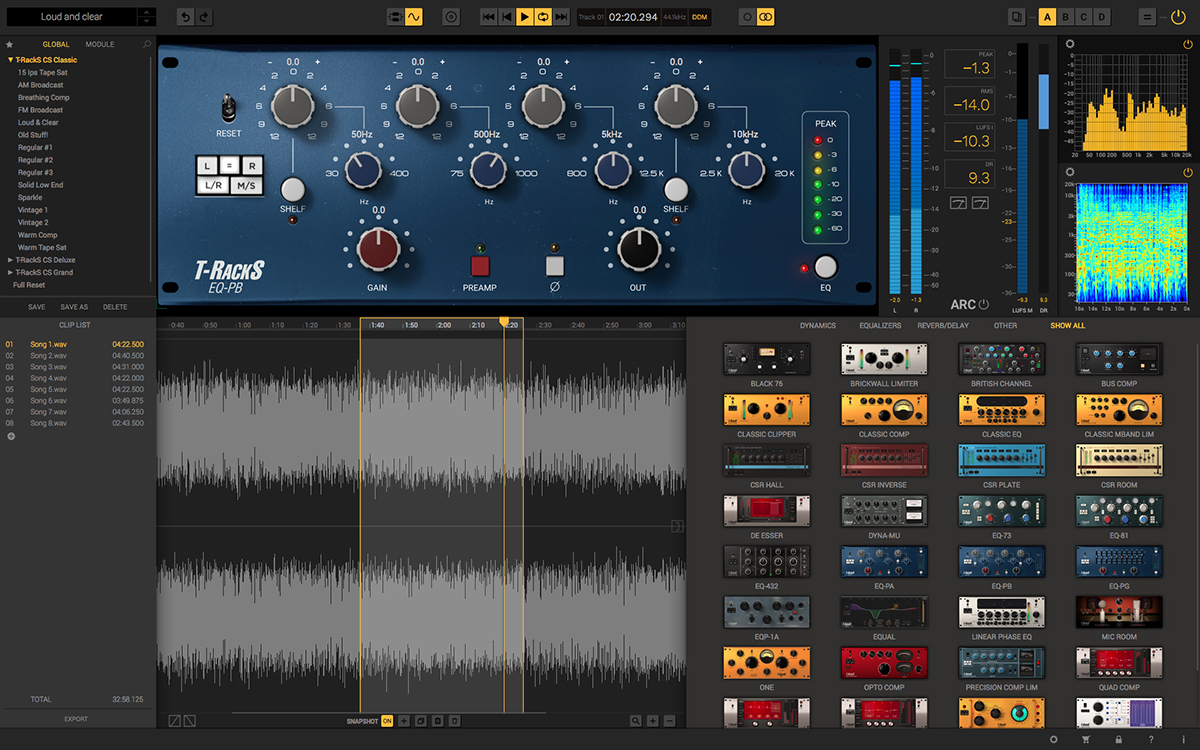 Based on an iconic American piece of recording hardware, the new Dyna-Mu vari-mu compressor/limiter is praised for its subtle but instantly recognizable sound. Thanks to its transformers and all-tube modeled heart, it can impart an audible magic which glues all the parts of a mix together. 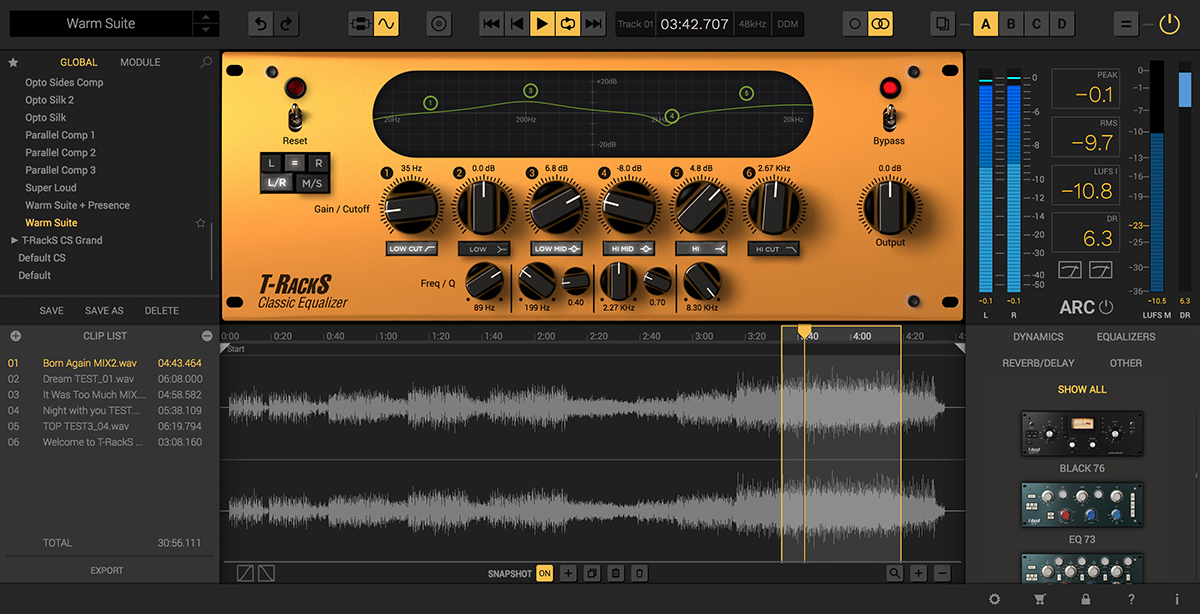 The new EQual digital equalizer is a 10-band, ultra-clear, high-end parametric equalizer with an extremely transparent sound, a full-screen resizable interface for ultra-precise editing and a vast array of filter shapes that replicate the typical curves of legendary British and American analog EQ's. This "hybrid monster" offers the best of both worlds: digital precision with ultra-detailed editing and on-demand analog character.

Developed as an "all-in-one" solution, the new ONE mastering processor has been designed for easy, streamlined and straightforward audio finalization. It includes an EQ, compressor, analog harmonic exciter, low-end enhancer and limiter that will let anyone achieve professional quality results in a snap.

T-RackS 5 now also offers the freedom and flexibility to optimize the mixing and mastering setup with 3 working environments. The standalone application for T-RackS 5 is a complete, self-contained, one-stop mixing and mastering workstation that allows users to load a set of audio tracks and output a finished product ready for digital delivery or CD replication. Secondly, the plug-in suite provides nearly all the standalone mode features within the environment of a DAW as the most powerful channel strip or mastering chain available today as a plug-in. Finally, all T-RackS processors (including metering) can also be used as single plug-ins in any compatible DAW for multi-track mixing and stereo mastering duties.

The all-new graphic user interface is designed to control everything from a single window, smoother and faster than ever. Plus, it's fully resizable, meaning it can utilize up to the full size of a display. The new flexible chain view allows the modules to be dropped into the 16-processor series/parallel signal chain at will directly from the sidebar carousel showing all available T-RackS modules.

T-RackS 5 now supports audio up to 32-bit/192kHz, with mastering for high-resolution music platforms and distribution without ever leaving its single interface, including 4 dithering options to choose from. The internal resampling engine delivers nothing less than best-in-class audiophile performance including DDM (Digital Delivery Mastering) on the output from the final limiting stage, offering an additional layer of protection against inter-sample peaks and overshoots. 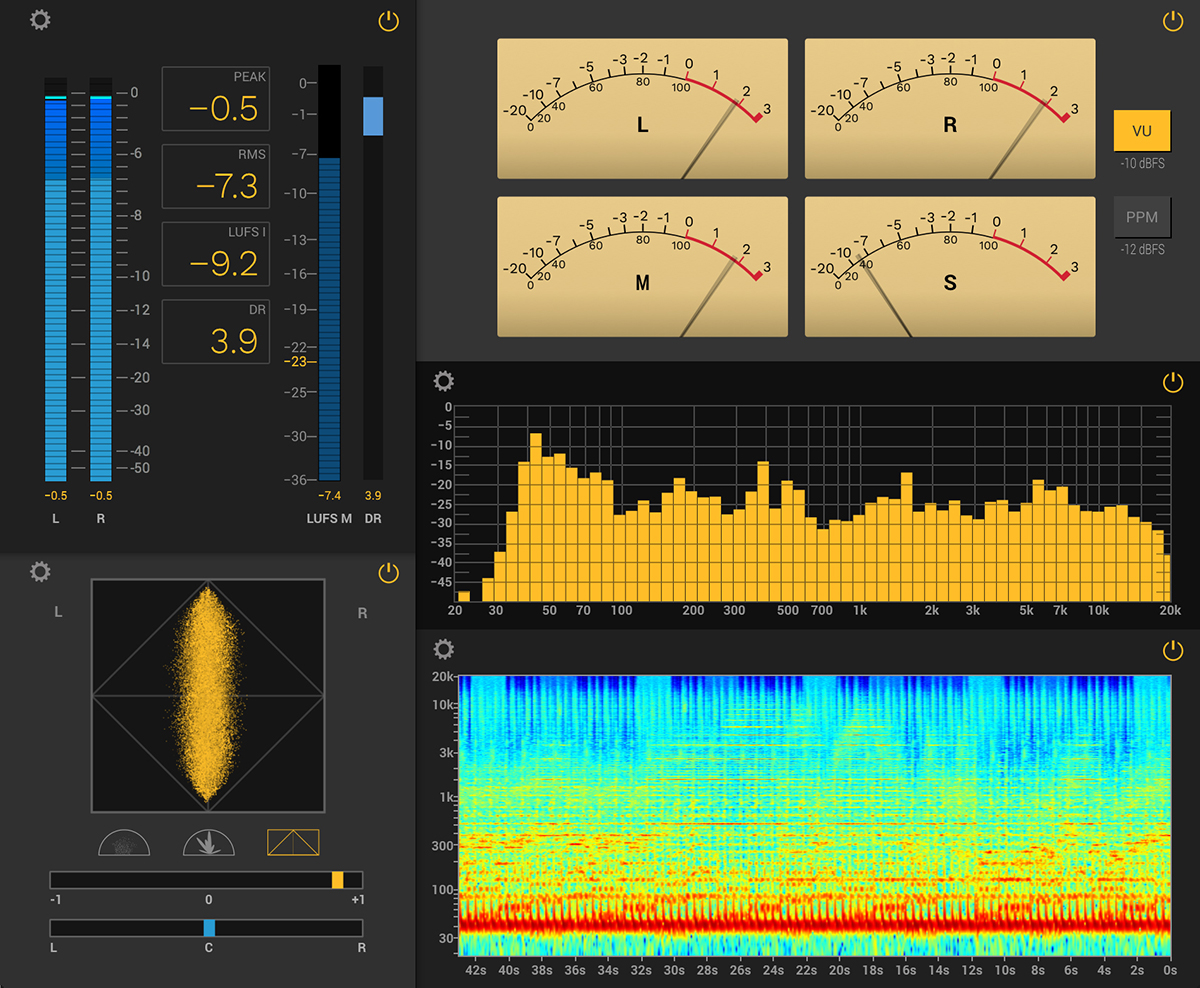 The new precision loudness LUFS meter is compliant with all leading professional reference standards for music delivery or broadcasting. Peak, RMS and Dynamic Range meters provide useful information about the dynamic response of mixes. The spectrogram, real-time analyzer, phase and correlation meters also help to spot frequency imbalances and phase problems. M/S meters included gather information about the relations between the mono and the stereo content. Additionally, T-RackS 5's new metering section can be launched as a separate floating window.

Now it's possible to assemble a full-length production directly within the T-RackS 5 interface and create an album sequence with suitable track metadata including pauses, fades, track ID's, ISRC codes, CD-Text and more, then export single high quality master audio files or the whole project in various formats such as WAV, AIF and standard DDP image for replication or Wav Cue files.

Top recording and mixing engineers including Tom Lord-Alge, Nick Davis and many others who use T-RackS modules in their projects have created a library of presets that offers users a unique opportunity to instantly improve their productions with ease. This expanding library of presets is included with T-RackS 5 and provides a great starting point for mixing everything from drums, vocals, guitars, bass and more with exceptional results. 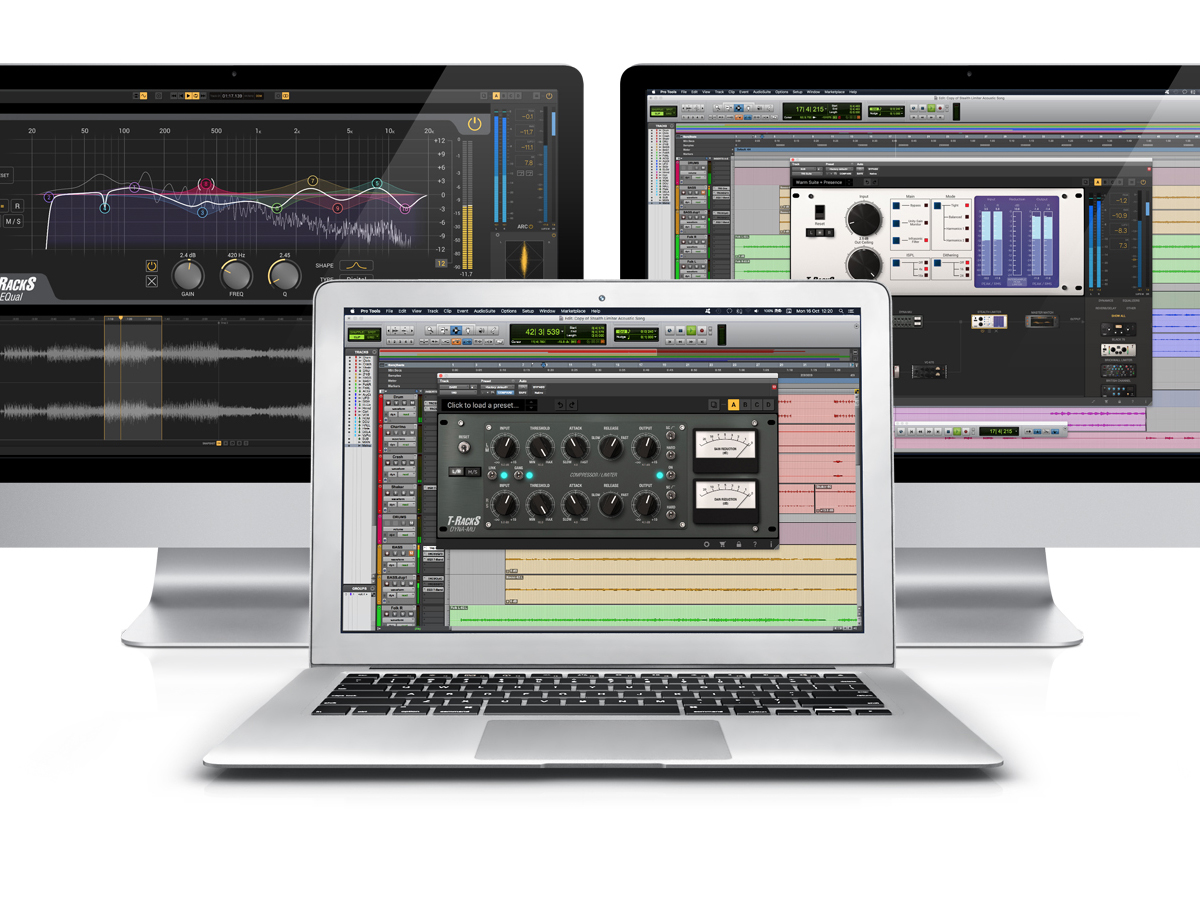 Users who have any registered IK product worth USD/Euro 99.99 or more can purchase T-RackS 5 MAX at crossgrade pricing of USD/Euro 299.99.
www.t-racks.com/five | www.ikmultimedia.com
related items