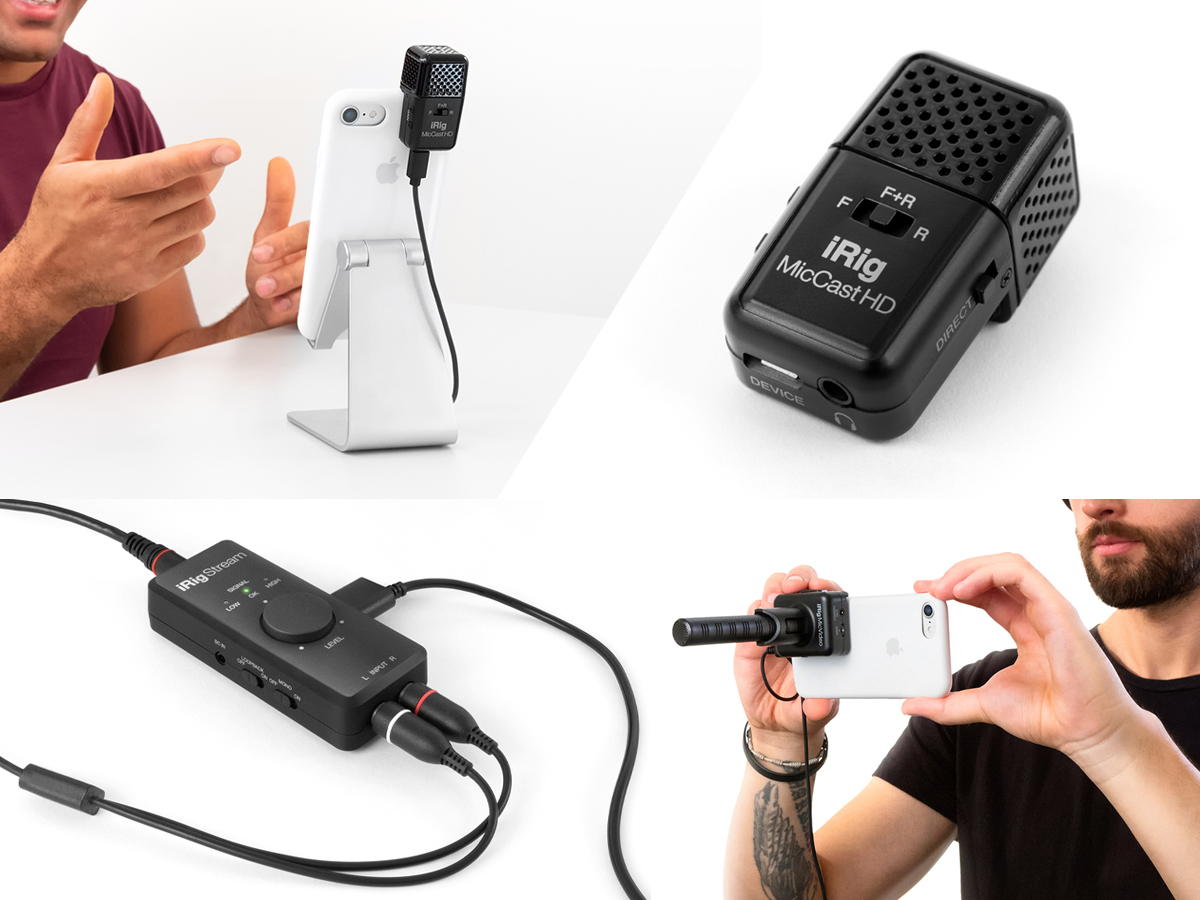 The innovative iRig Mic Video ($129.99) is a lightweight shotgun microphone offering professional features and multiple mounting options that make it compatible with the widest range of devices, including smartphones, tablets and DSLR cameras. It's also available as part of a mobile video creation kit with iKlip Grip Pro, for an all-in-one video capture solution.

On the other hand, the new iRig Stream ($99.99) is a mobile audio interface that mixes multiple audio sources down to one track for recording or streaming in mono or stereo with the user's mobile device and their favorite app.

More Detail
The ultra-compact, travel-friendly, iRig Mic Cast 2 offers an affordable solution for clear voice recording for YouTube videos, Instagram, live streams, or audio for Skype and FaceTime calls. This featherweight mic mounts securely onto an iPad or smartphone. Its innovative magnetic design lets users snap it into place on their device in seconds (even with a case). And the iRig Mic Cast 2 works in both portrait and landscape orientation on phones and tablets with the included breakout cable. 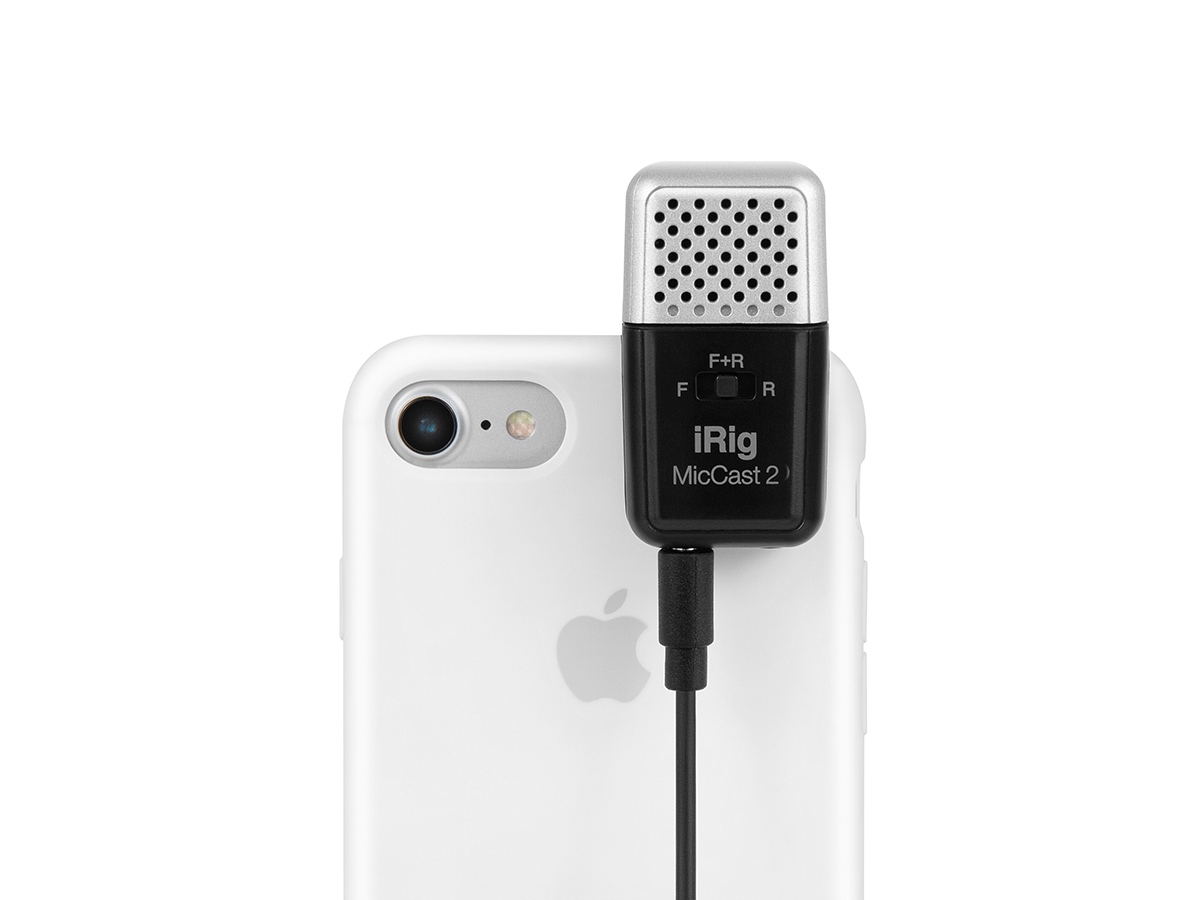 A new dual mic capsule design lets users select a front or rear pickup pattern to reject off-axis noise whether recording oneself or someone else, or both at once for an omnidirectional pickup pattern. The built-in headphone out can be used to monitor the signal with compatible apps to ensure high quality audio capture. The iRig Mic Cast 2 works with any app that records audio. For added convenience, it comes with iRig Recorder 3 LE (iPhone/iPad/Android) - an easy-to-use, high quality audio and video app that lets users record, trim, edit and share from their device.

The iRig Mic Cast HD offers all the core features of iRig Mic Cast 2 along with enhancements for professional use. It adds gold-sputtered capsules for superior sound, a 40 Hz to 20 kHz frequency response, and 24-bit, 96 kHz converters for crystal clear audio via Lightning, Micro-USB and USB-C cables, all included. It also offers front and rear selectable recording plus a bi-directional, figure 8 pickup pattern that's ideal for conducting interviews while rejecting off-axis noise. 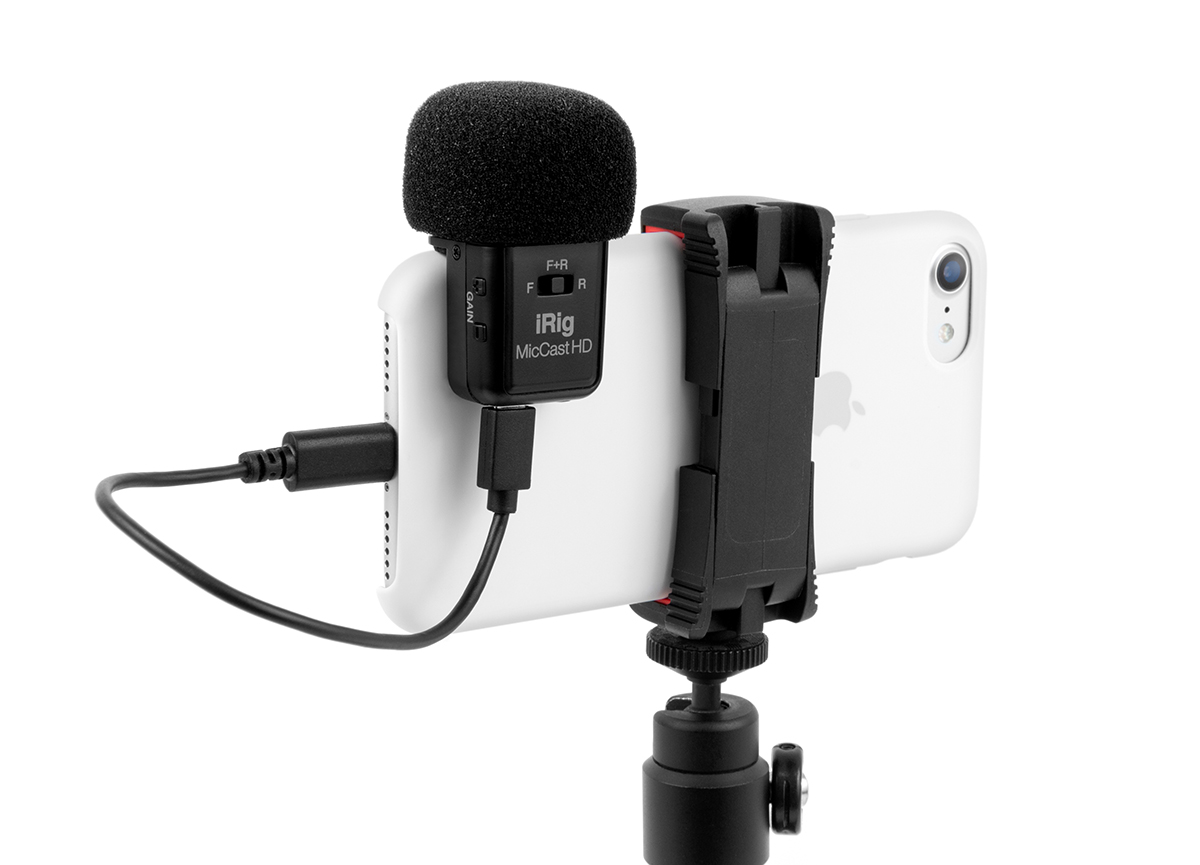 To ensure the highest-quality recording in any situation, iRig Mic Cast HD offers adjustable sensitivity, making it even easier to use in a wide range of settings. For monitoring, iRig Mic Cast HD offers a headphone out with selectable direct or processed sound to ensure compatibility with the widest range of apps, as well as a multi-color LED for visual indication of the signal strength, eliminating worries about losing a take due to poor audio levels.

iRig Mic Video and iRig Mic Video Kit
This shotgun-style mic offers professional-quality audio capture and production features that are suitable for a wide array of video shoots - from broadcasts to vlogs and even action shots. iRig Mic Video includes the same convenient magnetic mount as iRig Mic Cast HD, plus a hot shoe adapter for mounting to DSLRs. With the included Lightning, Micro-USB, USB-C and DSLR cables, users can switch between a serious studio setup and an ultra-mobile outdoor rig at a moment's notice. 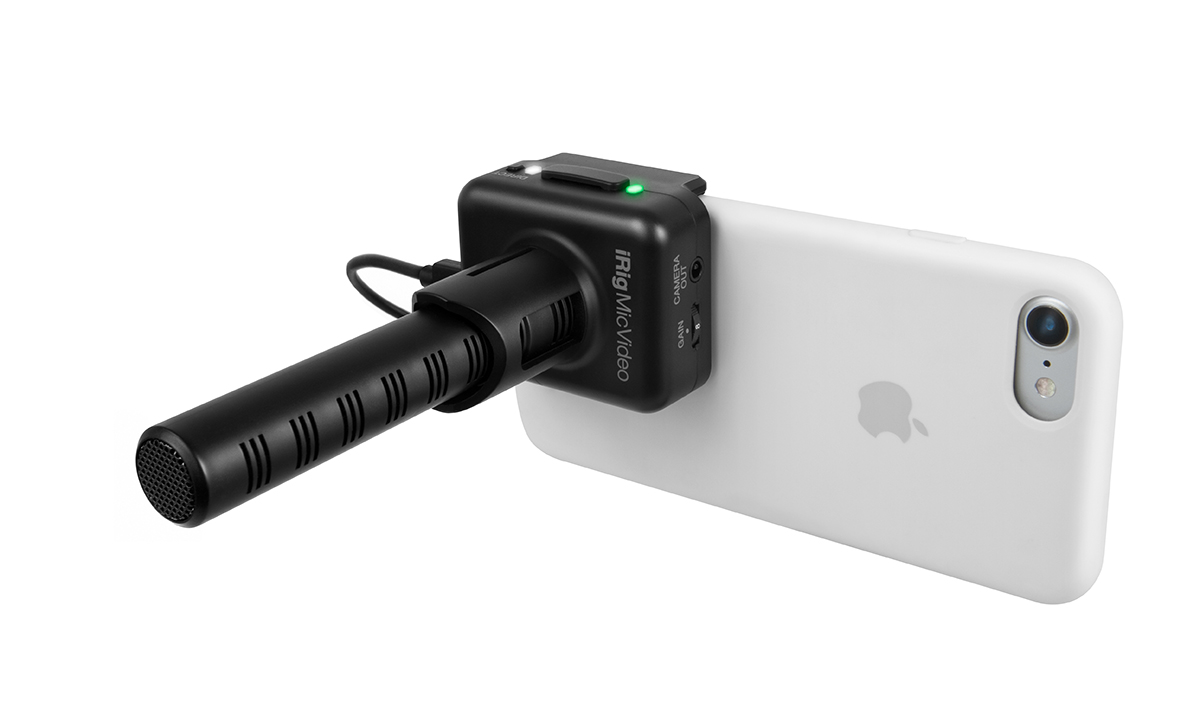 The gold-sputtered condenser capsule features a tight, directional pickup that focuses directly in front of the mic to reject distracting background noise, and 24-bit, 96 kHz converters ensure a quiet, clean signal. For use with DSLR cameras, iRig Mic Video also offers a 10db pre-amplifier that boosts the signal before it hits the camera to reduce any noise generated by the camera's built-in audio circuits.

A multi-color LED lets users conveniently and discretely check signal level at a glance, and a headphone out offers direct real-time monitoring or listening back to processed audio, to fit any workflow. iRig Mic Video is also the only smartphone-compatible, shotgun-style mic to offer adjustable gain for use in any situation. It works with any app that records audio, and comes with IK's own iRig Recorder 3 LE app.

For a more secure grip and stable on-the-go shots, the iRig Mic Video Kit comes complete with the mic plus IK's iKlip Grip Pro multifunction stand that transforms from handgrip to monopod to tripod in seconds. A standard UNC 1/4" thread lets users mount the iRig Mic Video, lights or other accessories on top, and an adjustable clamp holds phones securely even with a case. It's everything needed for capturing pro-level video in any situation, in a lightweight and portable rig.

A Mobile Streaming Solution
Finally, the new iRig Stream is an innovative stereo audio interface designed for musicians, podcasters and other creators looking to record or stream high-quality audio with their mobile device. Two line-level RCAs offer quick connection to mixers, keyboards and outboard gear, and the included Lightning, USB-C and USB-A cables can connect to the latest smartphones, tablets and laptops. 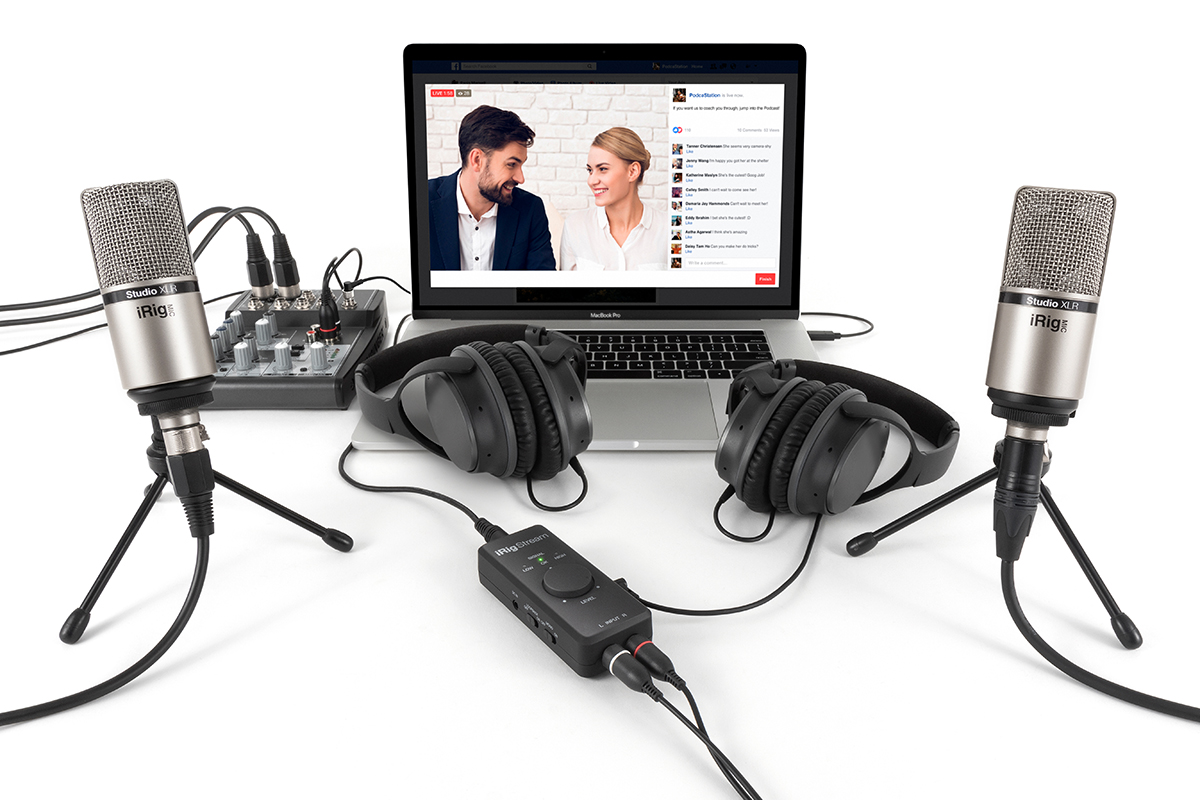 An innovative headphone/microphone jack offers both direct monitoring and an easy way to add a voice-over to a stream. Compatible with most earbud/mic combos as well as IK's analog iRig accessories, it offers a comprehensive solution in an ultra-compact unit.

An intuitive set of gain indicators and gain control make it easy to set the appropriate level, and 24-bit, 48 kHz A/D converters ensure superior sound. A Stereo/Mono switch ensures compatibility with the widest range of apps, including mono-only apps like Instagram, and a loopback feature lets users playback music on their device at the same time they stream.

All the new IK Creator Series products are available for pre-order now from the IK Multimedia online store and from authorized IK dealers worldwide and will ship in early November 2019.
www.ikmultimedia.com
related items