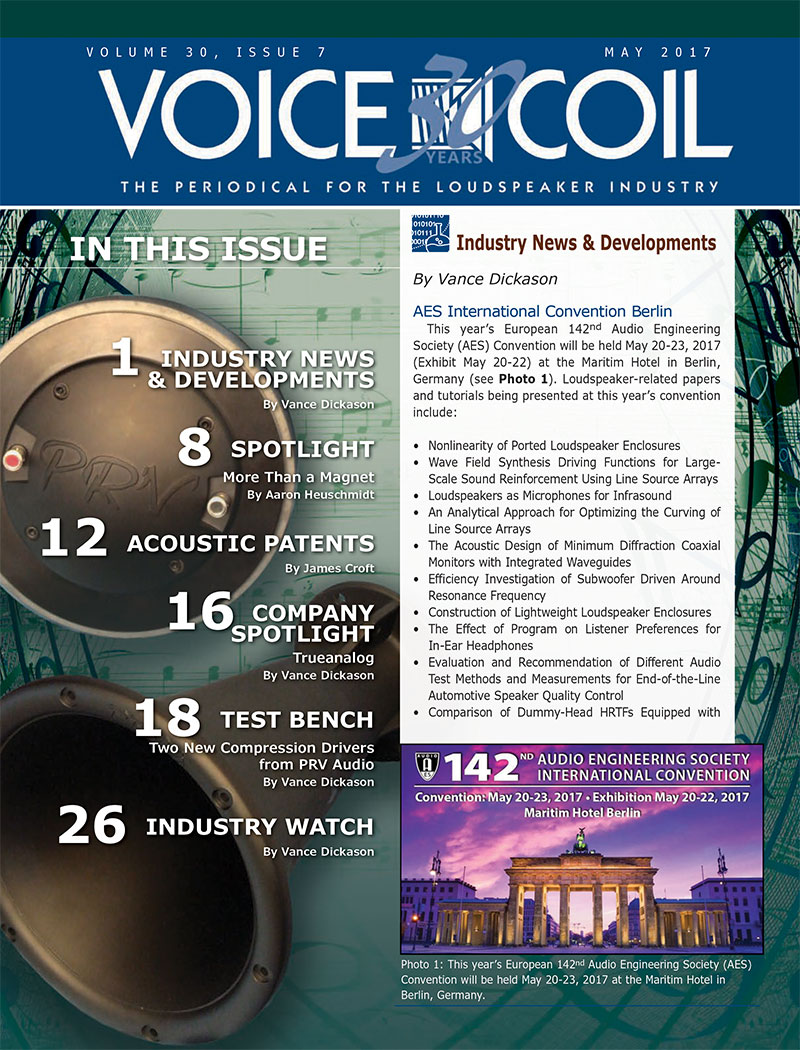 On the eve of another edition of the High End show in Munich, and the Audio Engineering Society (AES) European Convention, this year held May 20-23, 2017 (Exhibit May 20-22) in Berlin, Voice Coil highlights all the loudspeaker-related papers and tutorials being presented. And there’s a lot of content there that deserves our readers’ attention! Also, in this month's Industry News & Developments, we highlight the release of LOUDSOFT’s FINEBox 2017 loudspeaker enclosure design program.

And as the perfect segue, in Spotlight we have an excellent article by Aaron Heuschmidt, from Klippel GmbH, shedding new light on loudspeaker motors and new ways to measure key loudspeaker parts. Entitled, “More Than a Magnet,” the article describes how, through the use of a thin Hall Effect sensor - B-Field scanner (BFS) - which is available as an accessory for the Klippel R&D system associated with the Distortion Analyzer 2, it is possible to measure physical basics for the movement of the loudspeaker cone, including magnetic flux density directly measured at various positions inside or outside the gap.

In this month’s Acoustic Patents column, James Croft (Croft Acoustical), looks at a recent patent for a “Low-Profile Loudspeaker Transducer,” awarded in October 2016 to George Bullimore, on behalf of Tymphany. Considering the number of patents on shallow drivers, and the fact that the inventor also previously developed transducers for Harman International and holds other key patents, this is no doubt an interesting document to analyze in depth. In this case, the patent describes a low-profile loudspeaker transducer with “an arrangement of placing the motor up near or into the inside concave portion of a convex dome or inverted convex cone diaphragm,” and a low-profile structure “facilitated by an inverted placement of the spider suspension above the plane of the surround suspension to stabilize the voice coil during excursion while supporting a low profile structure.”

For this May 2017 edition, Vance Dickason writes about Trueanalog Strictly OEM, founded in 2009 and located on the ZengBen campus in Panyu, Southern China. Owned and managed by Philip Richardson—who our readers will probably recognize as the promoter of the Loudspeaker Sourcing Show (www.loudspeakersourcingshow.com)—this is a first-class operation, specializing in the design, engineering, and manufacturing of high-performance drivers, as well as passive and active turnkey systems for high-end home audio and the pro sound studio/mastering monitor industries. 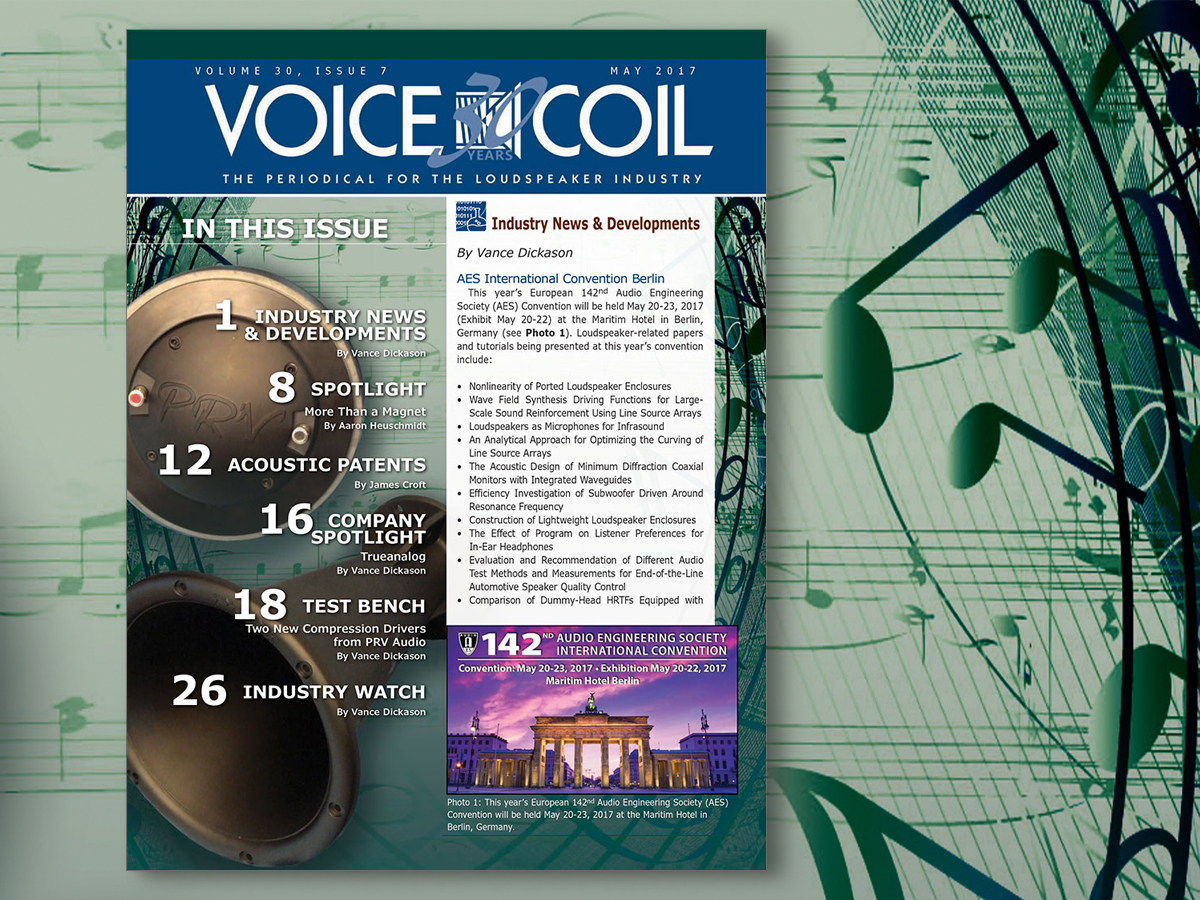 For this month Test Bench, Voice Coil characterizes two new compressions drivers from Brazilian pro sound OEM PRV Audio, a company that started operations in 2006, created by a group of former executives and engineers from one of Brazil’s most prestigious loudspeaker manufacturers, and which has not stopped producing high quality products since then. This edition of Test Bench looks at the recently released D4400Ti-Nd and the D4000Ph compression drivers. Both compression drivers are complemented with PRV Audio’s WGP22-50 2” bolt on 60° × 60° waveguide.

All this, plus Industry Watch, make this edition of Voice Coil an issue not to be missed. If you already subscribe, just go here - www.gotomyvcoil.com - to download the May 2017 issue.

Voice Coil is free for industry professionals. To qualify for a free subscription to Voice Coil, or renew your subscription, just go here: audioxpress.com/page/Voice-Coil-Subscriber-Services.html.
related items

Capture All the Excitement of Audio with audioXpress February 2020!

audioXpress.com - The Most Popular Stories of 2019

Kick Off Another Exciting Year for Audio Technology with audioXpress!