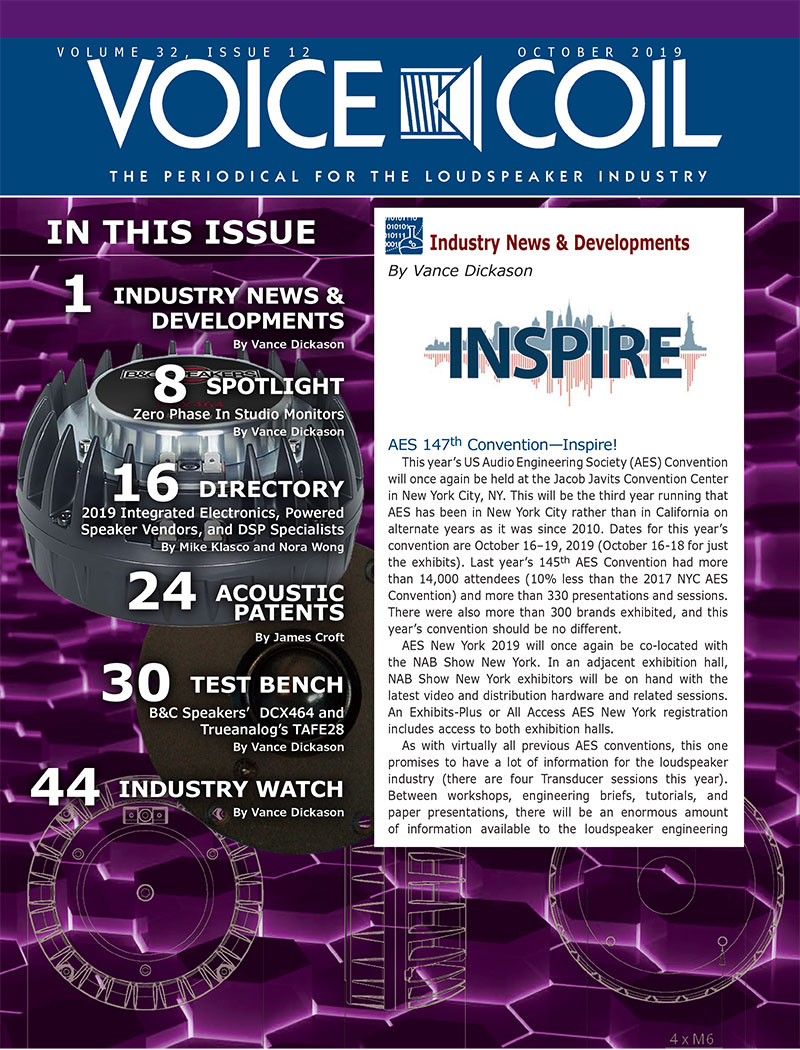 The October 2019 edition of Voice Coil will be distributed prior and during the 147th International Audio Engineering Society (AES) Convention, which will return to New York City, October 16 – 19, at the Javits Center.

In this edition, Vance Dickason compiled some of the most interesting sessions of interest to loudspeaker professionals, between workshops, engineering briefs, tutorials, and paper presentations. As with virtually all previous AES conventions, this one promises to have a lot of information for the loudspeaker industry and this year there are four Transducer sessions to consider. Voice Coil provides the main session highlights in advance.

Also for this edition, Mike Klasco and Nora Wong (Menlo Scientific) have compiled an updated directory of Integrated Electronics, Powered Speaker Vendors, and DSP Specialists. The directory features selected Integrated Electronics Speakers, which is a wide category ranging from OEM/ODM contract manufacturers of finished goods, together with vendors of plate amps, board level assemblies (e.g., power supplies), amp modules, DSP modules, and DSP software algorithm specialists for voice and music processing, some of which also offer IC or module solutions.

This month Voice Coil’s Spotlight focuses on Zero Phase in Studio Monitors, written by Vance Dickason with commentary from Floyd Toole, Wolfgang Klippel, Andrew Jones, and James Croft. As Dickason explains, "The implication of using FIR filters to zero out the phase of a loudspeaker to improve its subjective performance seems inherently flawed given all the research done over years that concluded that the human ear is not very sensitive to phase or group delay. Given this, I decided to get a few other opinions on this subject and sent out emails to a number of individuals whose opinions I greatly respect, and ask them what they thought of the concept of zero phase improving subjective performance in loudspeakers."

As Croft points out, the fundamental aspects of this design aims basically at improving the stereo separation and bass response of two-channel speakers configured into a single structure. The new patented design claims greater perceived stereo separation than prior art systems of this type, and Croft looks at the fundamental differentiators proposed by the inventors.

Also in this month's Acoustic Patents column, Croft reviews another patent, describing a Passive Acoustic Radiator Module, invented and assigned to Joseph Yaacoub Sahyoun (Redwood City, CA). As James Croft notes, "the invention under review is in fact the 21st US patent from the rather prolific and innovative Joseph Sahyoun, founder of Earthquake Sound. While Sahyoun’s previous works have included aspects of both loudspeakers and power amplification, the majority of his intellectual property has been directed toward various forms of passive diaphragm radiators."

The inventors' most recent effort, and the focus of this review is again a low-cost/high-efficiency passive radiator module design, featuring a new type of ported cavity structure inside an acoustic enclosure, allowing for one or more pairs of passive radiators to be symmetrically oriented and supported on opposing side walls, in a way that reinforces the potential performance benefits. The review looks in-depth at all aspects of the refined design and explains why and how it could effectively improve upon previous efforts and successfully achieve competitive performance.

For this month's edition of Test Bench, Vance Dickason characterizes the DCX464, a new high power coaxial compression driver and horn from B&C Speakers, and examines the TAFE28, a 28 mm silk dome tweeter from Trueanalog.

The first driver, from B&C Speakers, the DCX464 ring radiator compression driver, is a pretty unusual one. First, because it’s a coaxial compression driver - a rare category of compression driver and second because the DCX464 compression driver and the accompanying horn measure down to an honest 300 Hz, which is quite a low frequency considering only a few OEM horns on the market go even as low as 400 Hz. To have that low a cut-off frequency, the horn supplied with the DCX464 is huge with a mounting flange that measures 23.5” × 17.5” and a depth of 17.5”. B&C Speakers supplied the Tromba horn (Tromba is Italian for Trumpet) as a 3D printed and a fiberglass reinforced prototype with an 80° × 60° coverage pattern in the midrange. In terms of features, the DCX464 ring radiator is listed as a 1.4” (36 mm) throat compression driver, and that is for both the midrange driver and the high-frequency driver, which means that B&C Speakers has found a way to mix both drivers in the same throat. This is done with a patent-pending midrange integrator that allows both diaphragms to work together over a wide frequency range without causing any major magnitude or phase errors. Definitely, a configuration that deserves careful characterization.

The second transducer to be examined this month is from Trueanalog, the company that promotes and supports the Loudspeaker Sourcing Show, which takes place October 18-20 at the Nansha Grand Hotel, Nansha, China (www.loudspeakersourcingshow.com). This is the first time Test Bench has characterized any product from Trueanalog, and the company sent Voice Coil its new 28 mm diameter silk dome tweeter, intended for high end hi-fi and recording studio applications. Features for the TAFE28 include a coated silk/cotton-type diaphragm and surround made from a string weave using twisted cotton and silk, super low carbon content steel for the front plate and T-yoke (the low carbon steel from Sumitomo is coupled with a proprietary forging process), a two-layer 28 mm diameter CCAW voice coil wound on an aluminum former, a felt damped pole piece venting into a shaped and damped plastic back enclosure. 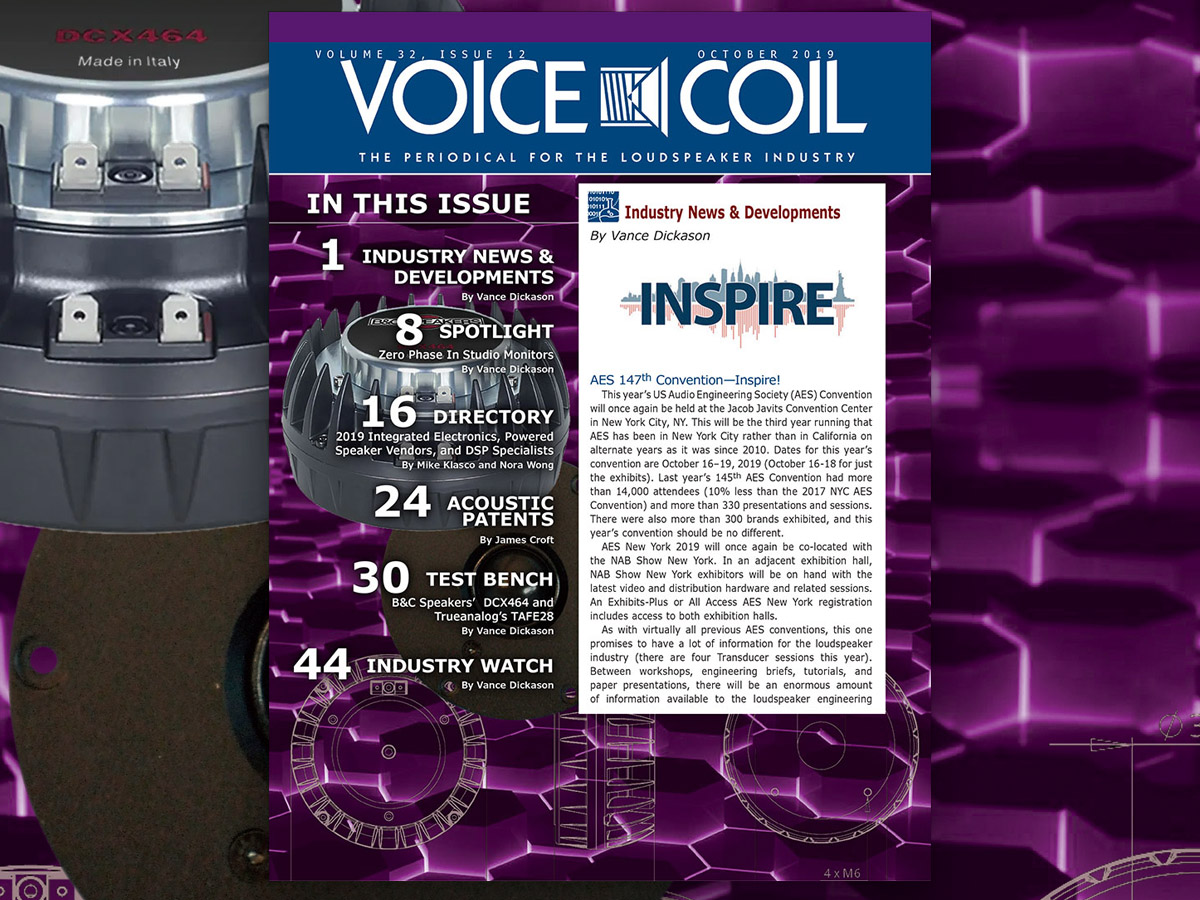 And as usual, Voice Coil October 2019 also includes a compilation of relevant updates in its Industry Watch section.

This edition is available for download and already in the mail for print subscribers. Subscribers can go to - www.gotomyvcoil.com - to download this issue.

Remember, Voice Coil is available in print and download for all registered subscribers, free for industry professionals. To qualify for a free subscription to Voice Coil, or renew your subscription, go to: audioxpress.com/page/Voice-Coil-Subscriber-Services.html.