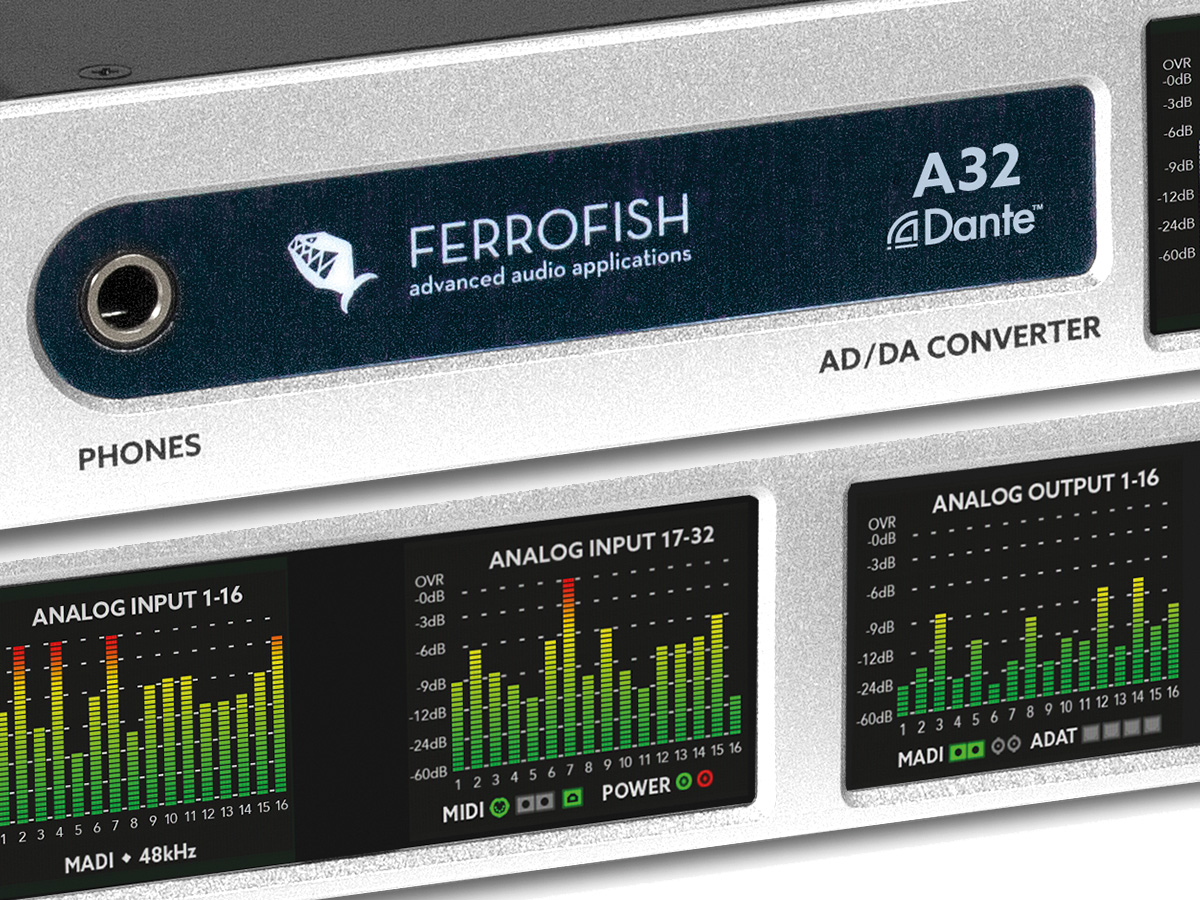 With its Dante audio networking capability, the new Ferrofish A32 Dante is a formidable solution for studio, live, and installed applications. By utilizing uncompressed, multi-channel digital media networking technology with near-zero latency and synchronization, the A32 Dante is designed to eliminate the unsightly and often trouble prone mass of cables utilized in large scale productions or AV installations. Dante does away with heavy, expensive analog or multicore cabling, replacing it with low-cost, easily-available CAT5e, CAT6, or fiber optic cable for a clean, lightweight, and economical solution over a single, standard IP network.

Because of this wealth of I/O choices, the unit is also a very capable audio format converter while simultaneously functioning as an AD/DA converter. Audio can be freely routed (in groups of 8) between all interfaces. As an example, it is possible to use the first 32 Dante channels for converting to analog while using the remaining 32 Dante channels to connect the A32 Dante with ADAT equipment.

To ensure the finest audio quality, the new A32 Dante employs 24-bit 192 kHz high quality converters with analog gain switches. Feroofish uses converters from Cirrus Logic with great analog performance. Every analog input and output has analog switches for selecting between +4dBu, +13dBu and +20dBu, and every channel can be set separately. The levels which lie in between are set by an Analog Devices Sharc DSP, ensuring the full analog performance of the converter is preserved.

Operation and control of the A32 Dante is intuitive and comprehensive. The unit provides four TFT screens that permit the complete control of all levels and adjustments on the equipment, which includes extensive routing possibilities. Any input signal (in groups of 8) can be routed to any output signal. Equally notable, the A32 Dante’s remote control capabilities are impressive. In addition to remote operation via Dante, MIDI, or USB, the system also supports MIDI over MADI.

This capability provides remote control of the A32 Dante via the same MADI cable carrying audio signal. The new A32 Dante ensures the finest audio quality in both the analog and digital domains. The A32 Dante’s high-end analog circuit is complemented on the digital side by a 400 MHz Sharc DSP that facilitates extremely precise audio calculations to ensure that, on the digital side, not a single bit is lost. The result is stunning audio performance throughout.

For the master clock Ferrofish used a temperature compensated high quality oscillator, and when the user selects MADI or ADAT as clock source, the digital PLL produces a virtually jitterless sample clock for the converters. Using a fourth generation Sharc DSP connected to all 258 analog and digital channels, the converter is able to freely route and mix all these signals and Ferrofish intends to introduce future updates to the A32, leveraging the built-in audio processing capabilities.

Other outstanding features of the A32 Dante converter include redundant power inputs. If one power supply fails, the user sees a warning on the TFT screens. MADI is also laid out redundantly. If the user connects both, optical and coax, the input automatically switches to the other source, if sync is lost.

But probably one of the really clever aspects of the design is the headphone output in the front panel allowing users to monitor every single analog or digital channel. With one touch of the encoder the user sees the headphone screen, from where it can set the volume, and select the source for the headphone output. It’s also possible to store up to seven mixes, and just select one to hear it on the headphones.
www.ferrofish.de
related items