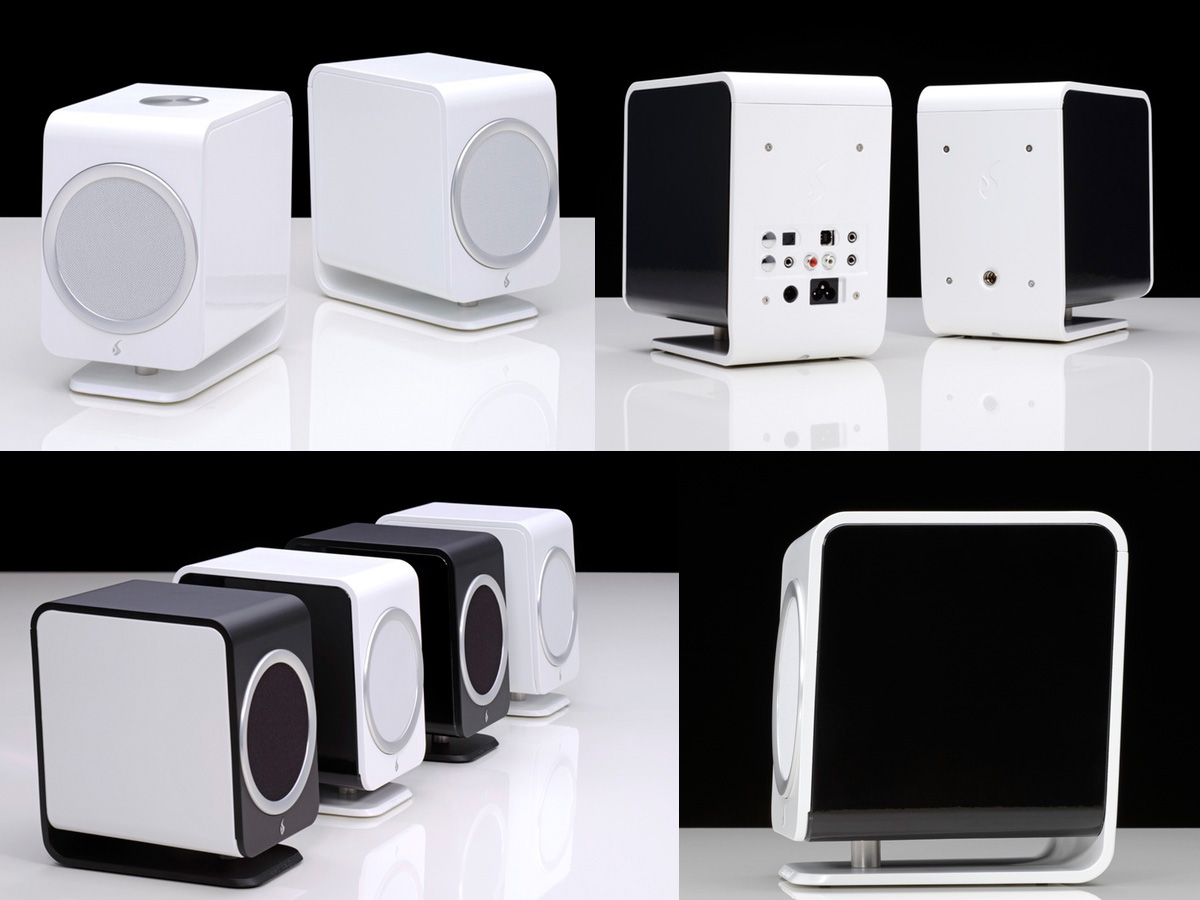 Feniks Audio was founded by a father and son team of Ted and Robert Kwolek, an ideal combination of an engineer and a designer, based in the Canton of Schaffhausen in Switzerland. The Essence project was born out of the desire to offer the ultimate in desktop sound quality in the smallest possible high-end speaker. With a compact and modern design, the speakers are compatible with a full selection of inputs including; USB, Toslink and analog, meaning that the system is capable of catering to a wide range of devices.

With an integrated 24-bit/96kHz DAC designed by world-renowned electronics specialist Gordon Rankin (Wavelength Audio), and a custom-designed coaxial driver unit, each speaker consists of three panels with a series of sealing grooves along the joints. This design reduces unwanted resonances to a minimum and results in better sound quality. The Essence also has a seamlessly integrated volume wheel at the top of the active unit, making changing listening levels an easy task.

According to Robert Kwolek, VP and Design Director at Feniks Audio, “With the shifts in listening habits over the past decade away from traditional hi-fi to computer and all-in-one devices, we noticed a gap for a really high quality computer speaker. While the performance of the Essence is firmly in high-end territory, it was of utmost importance to us that it be accessible to anyone, so the system is fully plug-and-play. Featuring unique engineering solutions like no other loudspeaker on the market, the Essence is more like a precision instrument than a traditional speaker.”

“Putting a DAC into a traditional large bookshelf speaker, as the “competition” has tried, does not a computer speaker make,” he says. After two years in development, thousands of man hours, and 15 prototypes, the Essence project looked more like what they where looking for. “It all started with the ES-1, a colorful little speaker we made in our garage. Only 10 pairs were built and mostly sold among friends. Still, it tested the concept of what a truly high-end computer speaker could be, and sounded great. Next came the ES-2, the first of our speakers to feature an aluminum cabinet, and the sonic benefits were immediately obvious. We made 60 pairs of the ES-2, and it was sold only in Switzerland. The ES-2 received first place in a Schaffhausen innovation competition in 2013, the IVS Innovationspreis.”

With the Essence, things got serious. The company contacted Gordon Rankin to design the internal DAC using the latest ESS Sabre DAC, and they designed a more efficient system to manufacture, starting with a die-cast aluminum cabinet, using a special grade, low resonance alloy. Each speaker cabinet consists of just 3 thick aluminum precision die-cast panels. Every piece has its own mold, which weigh hundreds of pounds, and cost upwards of $10,000 each. The side panel is clamped between the front and rear panel using threaded stainless steel tension rods, interlocking with each other thanks to a system of grooves which run along the entire length of the joints. The panels stay under continuous compression as a solid block, further eliminating unwanted resonances. Internal ribs not only reinforce the panels, but their irregular placement eliminates resonances at different frequencies.

The bass ports, integrated into the casts of the side panels, are different lengths in the right and left channels, thus covering different frequencies. The foot panel below acts to extend the length of the port. Inside the aluminum cabinet there’s also a 50W/channel ICEpower amplification module and an audiophile-quality amplified headphone stage. The rear connections include USB, Toslink, and analog inputs, with a mini-XLR connector that’s used for the 2m speaker cable that connects the right and left channels. The system automatically enters and wakes from standby when the connected computer or source is turned off or put to sleep.

The 4.5” custom-designed coaxial driver of the Essence is the heart of the system. A coaxial driver is the ideal choice for a nearfield computer system as it guarantees a point-source sound, meaning superior stereo imaging, less sensitive to proper placement. The Essence driver combines a 115mm mid-woofer, and 20mm tweeter, using a rigid die-cast aluminum basket, aerodynamic to minimize rearward reflections, combined with a very light cellulose membrane (moving mass of only 4.5g) and powerful neodymium magnets, large 32mm voice coil and Kapton voice coil former, with an integrated high quality passive crossover and pro grade gold plated connector terminals.

In order to avoid selling the Essence speakers for an MSRP at close to US $3000, the team decided to focus on selling directly to as many users as possible. A Kickstarter campaign looked like the ideal platform to promote the concept and offer the chance to purchase the speakers direct at less than half price, shipping worldwide. A decision that also allowed the team to actually assemble the products in Switzerland and maintain strict control. The project was now successfully funded, reaching the established target less than a week to the end of the campaign. Orders are still available.
feniksaudio.com/essence.html
www.kickstarter.com/projects/feniks/essence-0
related items