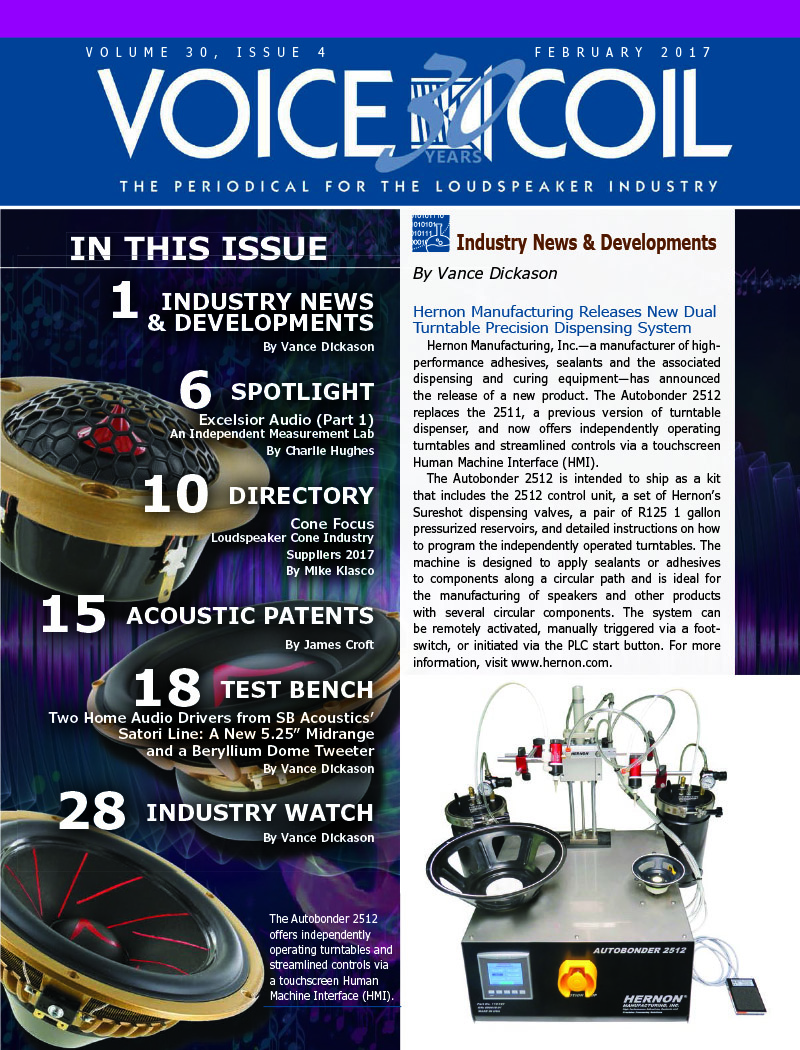 As it is an established tradition – and following the published content schedule for the year – the February edition of Voice Coil features a complete directory of Loudspeaker Cone Industry Suppliers 2017, carefully curated by Mike Klasco and Nora Wong (Menlo Scientific).

On this month's Spotlight, Charlie Hughes discusses in detail the planning and construction of his own independent measurement lab, Excelsior Audio. As the author describes, the company was founded in late 2004 as an audio and acoustical consulting, design, and measurement business, primarily focused on the design and development of loudspeaker systems for various manufacturers. "This has entailed enclosure design, horn design, drive unit specification, passive crossover design, and DSP-based filter and processing parameter specification. Naturally, this type of electroacoustics work requires the ability to perform accurate measurements of loudspeakers and electronics." With the encouragement and technical assistance from business partners and friends, Excelsior Audio began planning, and eventually opened its own measurement facility. The article describes the requirements, design process and all the different areas of focus.

On this month's Acoustic Patents column, James Croft (Croft Acoustical) looks at a Parametric System for Generating a Sound Halo and Methods of Use Thereof, recently awarded to Luke Batchelder (Somers, NY), and J. Samuel Batchelder (Somers, NY) on behalf of Convey Technology, Inc. (Somers, NY). The patent, granted in November 2016, details "a parametric system for generating audible sound, comprising a transducer array configured to emit modulated ultrasonic waves in a converging wave pattern toward a focal volume, where the modulated ultrasonic waves are configured to demodulate to generate audible sound waves in the focal volume, and where the generated audible sound waves emanate from the focal volume with a diverging wave pattern."

As James Croft explains, a parametric loudspeaker is an electro-acoustic transduction method that generates an audio frequency modulation of an ultrasonic wave-train into the air, driving the air to nonlinearity and creating the desired audio frequencies (and unfortunately, many other frequencies) in a highly directional air column projecting out from the ultrasonic transducer. "The parametric loudspeaker is one of those technologies that get rediscovered and “invented” about every 10 years," he comments in this patent review.

For this month Test Bench, Vance Dickason characterizes two home audio drivers from SB Acoustics’ Satori Line: the new MR13P-4 5.25” midrange and the much anticipated TW29BN beryllium dome tweeter. As Dickason recalls, the January 2017 issue of Voice Coil reviewed the new SB Acoustics MR16P-4 Satori line midrange. "The subject of this month’s Test Bench is the recently released SB Acoustics 5.25” MR13P-4 Satori midrange. As with the MR16P-4, the MR13P-4 is nominally a midrange version of the SB Acoustics MW13P-4 5.25” woofer, but with higher sensitivity and shorter Xmax. The original Satori woofer, the MW18R, while looking cosmetically similar to the Scan-Speak Illuminator 18WU series, was a well-designed driver that has established itself as a true high-end home audio competitor. The feature set for the MR13P-4 is similar to the original Satori MW13P." 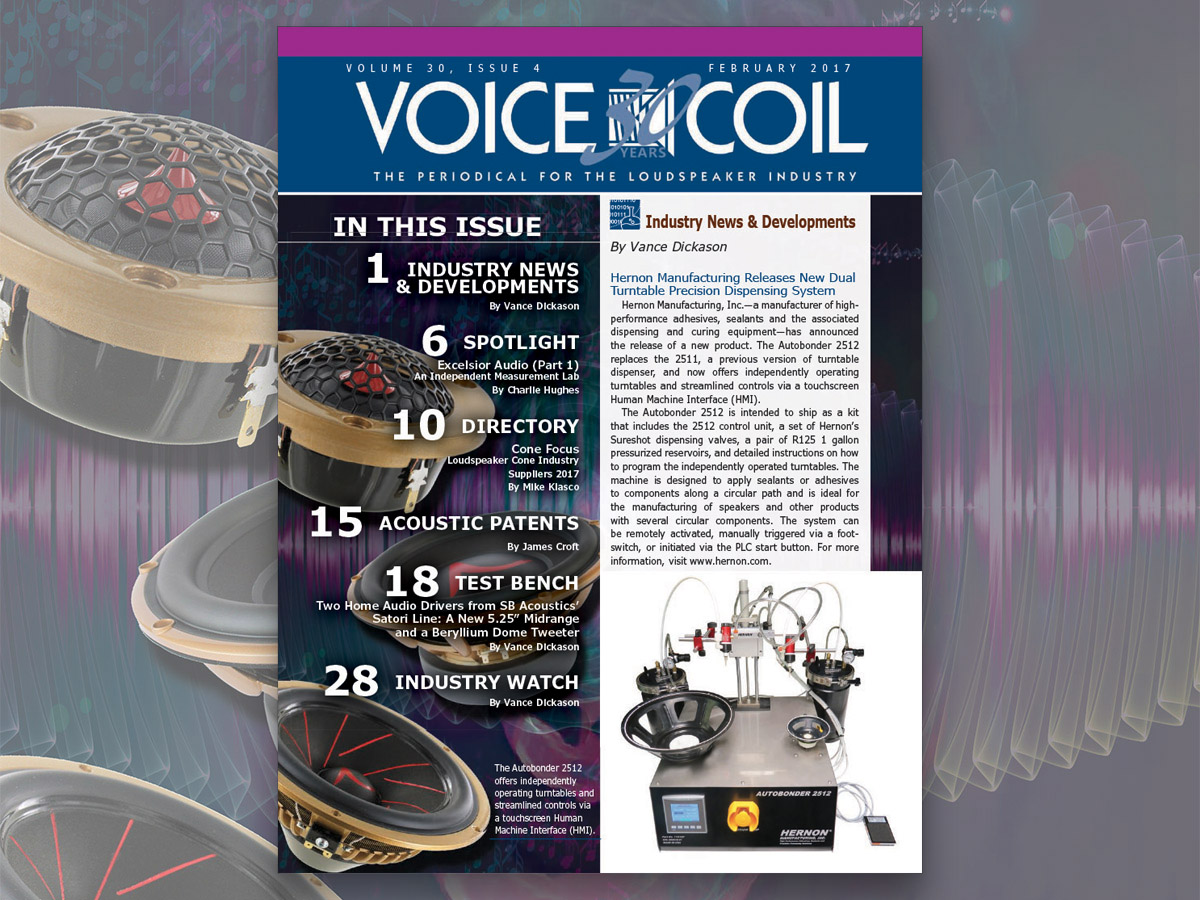 Finally, in this edition, Vance Dickason, Mark Gander, Rich Cabot and Cal Perkins remember the life and work of Chris N. Strahm (November 20, 1956 – November 25, 2016), the founder and president of LinearX, which recently passed-away too soon.

To download the February 2017 issue, renew your subscription, or qualify for a free subscription to Voice Coil, just go here: audioxpress.com/page/Voice-Coil-Subscriber-Services.html
related items