Strategically, it made sense to make the announcement of the 800 D3 official release at this moment, given the simultaneous announcement that the British audio brand founded in Sussex, England, in 1966, had been acquired by Silicon Valley based EVA Automation, a technology company founded by Gideon Yu, a strategic investor that helped build world-class companies including Facebook, YouTube and Square. For Bowers & Wilkins, the scheduled launch of this best-selling speaker may well signal the end of an era for the brand, as well as the beginning of a new important cycle for the company, on the eve of Bowers & Wilkins 50th anniversary. The announcement is also a symbolic moment in the spirit of its founder, following the significant investment made in its factory in order to produce the seven D3 models in the series and given John Bowers’ philosophy of “losing the least”. 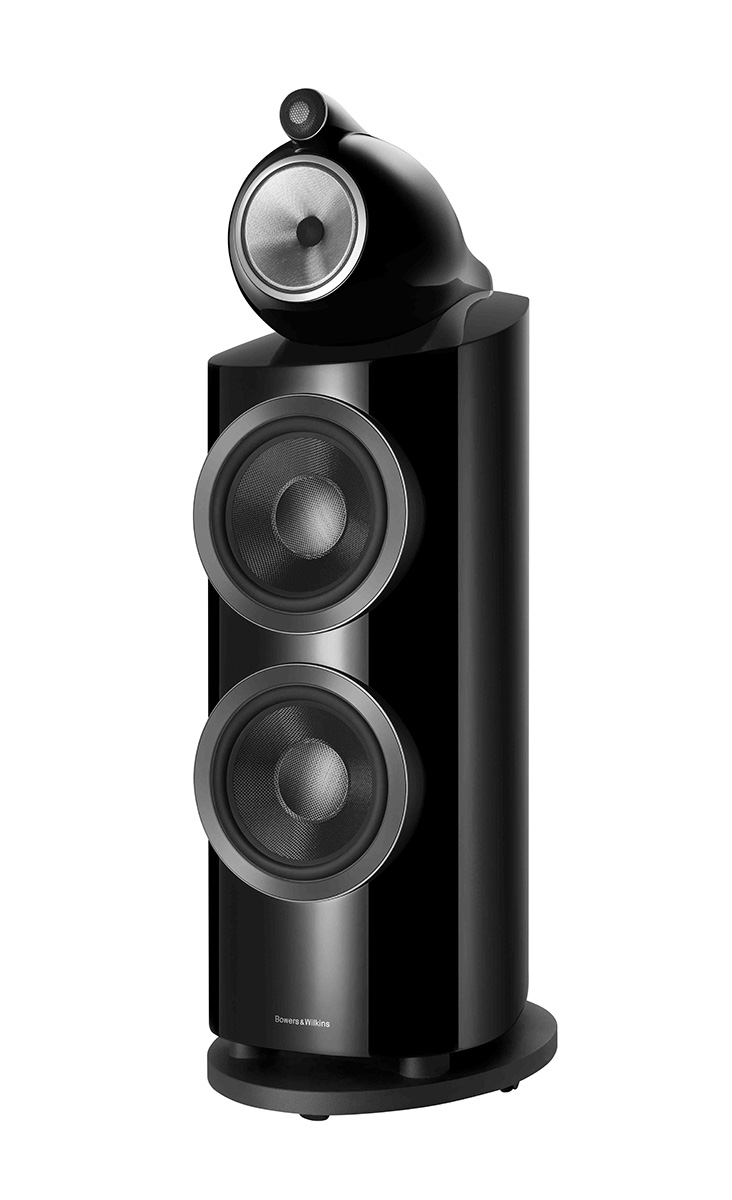 As Bowers & Wilkins states, the 800 D3 loudspeaker redefines reference quality sound and it is the best performing, most advanced loudspeaker the brand has yet produced. When the new 800 Series Diamond launched late last year, the range as a whole redefined performance standards, both for the 800 Series itself and for the wider world of premium loudspeakers. The result of an intensive seven-year project to make the best better, the 800 Series Diamond resulted from a combination of tireless research and development, advanced engineering, and countless hours of listening by the very best ears in the business. And with the launch of the range’s flagship 800 D3, the bar has been raised once again.

The most immediate visual differences between the new 800 D3 and the 802 D3 is the size of the new speaker’s low frequency enclosure and twin bass drivers. The 800 D3 features two 10-inch Aerofoil bass drivers, as opposed to the two 8-inch drivers on the slightly smaller 802 D3. However, the bass drivers are not only larger: they also utilize a unique carbon fiber construction for an even stiffer, more pistonic cone and are optimized for linearity and low distortion. The drivers also benefit from a higher specification motor assembly with upgraded magnets for increased control and crossover improvements that offer a considerable upgrade over the 802 D3 in terms of performance.

The Aerofoil drivers’ dust caps are an enhanced version of the component found on the 802 D3 and 803 D3 and are formed from a sandwich construction consisting of carbon fiber and the same syntactic foam as the Aerofoil cone itself. This further reduces dust-cap resonances and is one of the many seemingly minor developments and tweaks that represent the incredible attention to detail on the no-stone unturned 800 D3.

Elsewhere, the 800 D3 deploys the same size Continuum cone, Turbine head and solid-body tweeter assembly as the 802 D3. However, improved crossovers and capacitors combine to raise the resolution of these vital areas in order to better match the 800 D3’s excellent bass performance. Even with all these changes, the 800 D3 sports a similar load and sensitivity to the 802 D3.

These innovations, when teamed with improvements to the series as a whole, such as dramatically stiffer cabinets, a more robust Matrix bracing system that involves thicker slats, and the thoughtful application of aluminum and steel bracing where it is required, means the new 800 D3 offers more bass weight and effortless and accurate reproduction. When compared to the already outstanding 802 D3, low frequency drive unit distortion is 10dB less.

There’s also a dramatically improved sense of scale when compared to the outgoing 800 Diamond, and the 800 D3 is capable of effortlessly rendering a full-size symphony orchestra in all its glory. This is thanks to the extra scale that is available and the improved knitting together of the four drive units, plus the extra resolution and detail that these new drive unit technologies deliver not only in the 800 D3, but across the entire 800 Series Diamond range.

Testament to Bowers & Wilkins desire to consistently produce class-leading loudspeakers, the state-of-the-art manufacturing plant in Worthing, West Sussex, was redesigned specifically for production of the new 800 Series Diamond. The 800 D3 is completely manufactured in the updated facility alongside the rest of the range.

The end result of these years of work, tireless attention to detail and significant commercial expenditure is not only a worthy flagship for an exceptional range of loudspeakers, but also the very best loudspeaker that Bowers & Wilkins has ever produced. The new 800 D3 is also an evocative reminder of the way the passion and drive of John Bowers is still alive and well in the company he founded 50 years ago. 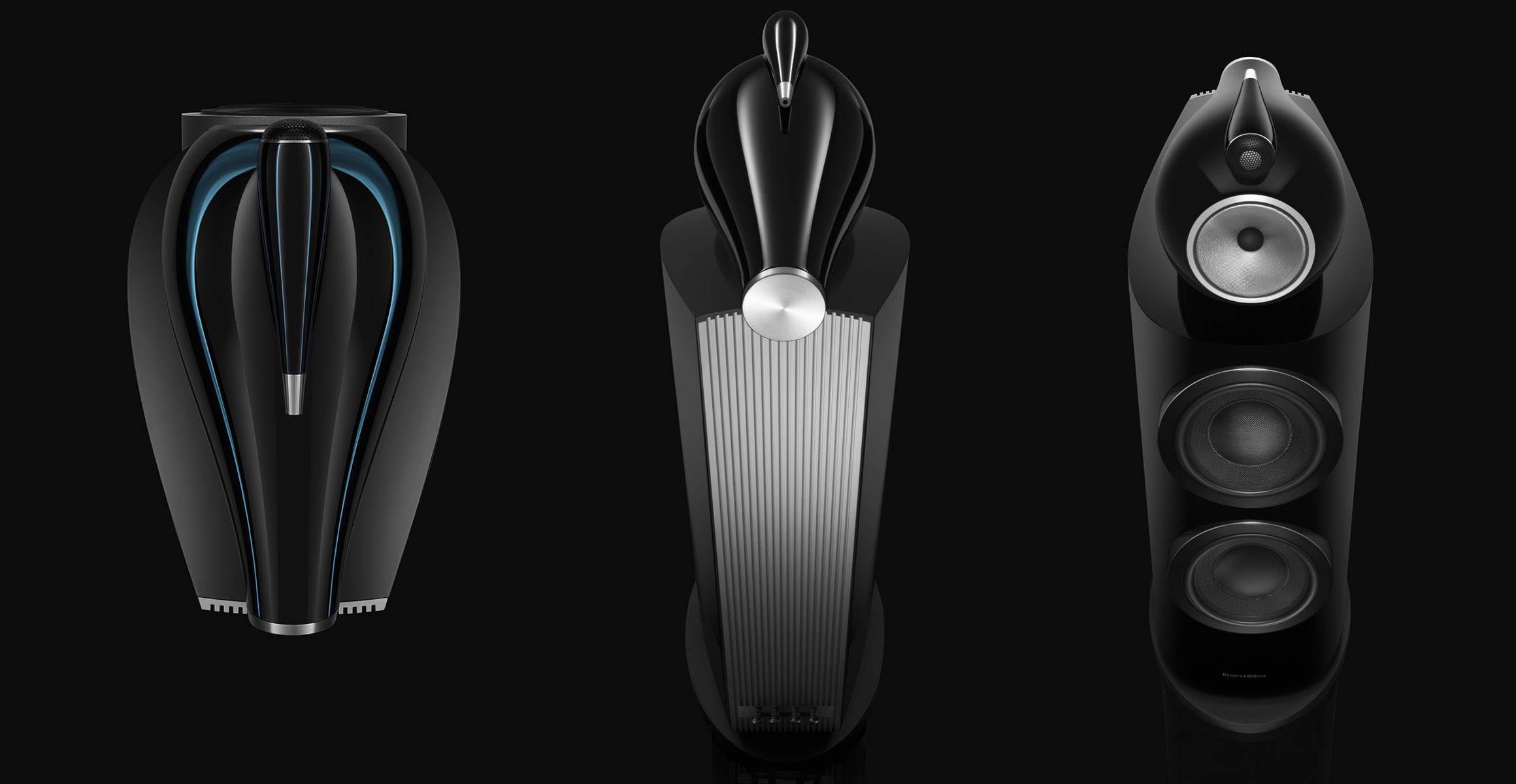 The drivers and design
The Aerofoil bass cone was designed using advanced computer modeling - previously unavailable when the company designed the previous 800 series - and a new syntactic core material, allowing to produce a cone of varying thickness, with maximum stiffness where it’s needed most. This optimized shape means the cone displays pistonic behavior produces bass that’s more precise and controlled.

The new Diamond 800 series also finally replaces the use of Kevlar as a midrange cone material. Following eight years of intensive development, Bowers & Wilkins believes they found something even better, using a composite construction in the Continuum cone that the brand says offers a more open, neutral performance. Thanks also to computer modeling, the design of the 800 Series Diamond midrange chassis has been completely overhauled and improves stiffness, while tuned-mass dampers help to reduce unwanted vibrations to a bare minimum.

To minimize vibrations, the 800 Series Diamond, uses the stiffest tweeter enclosure yet. The tweeter assembly for the new range is housed in a solid piece of aluminum, while an improved gel decoupling system isolates the tweeter from the effects of cabinet resonance. 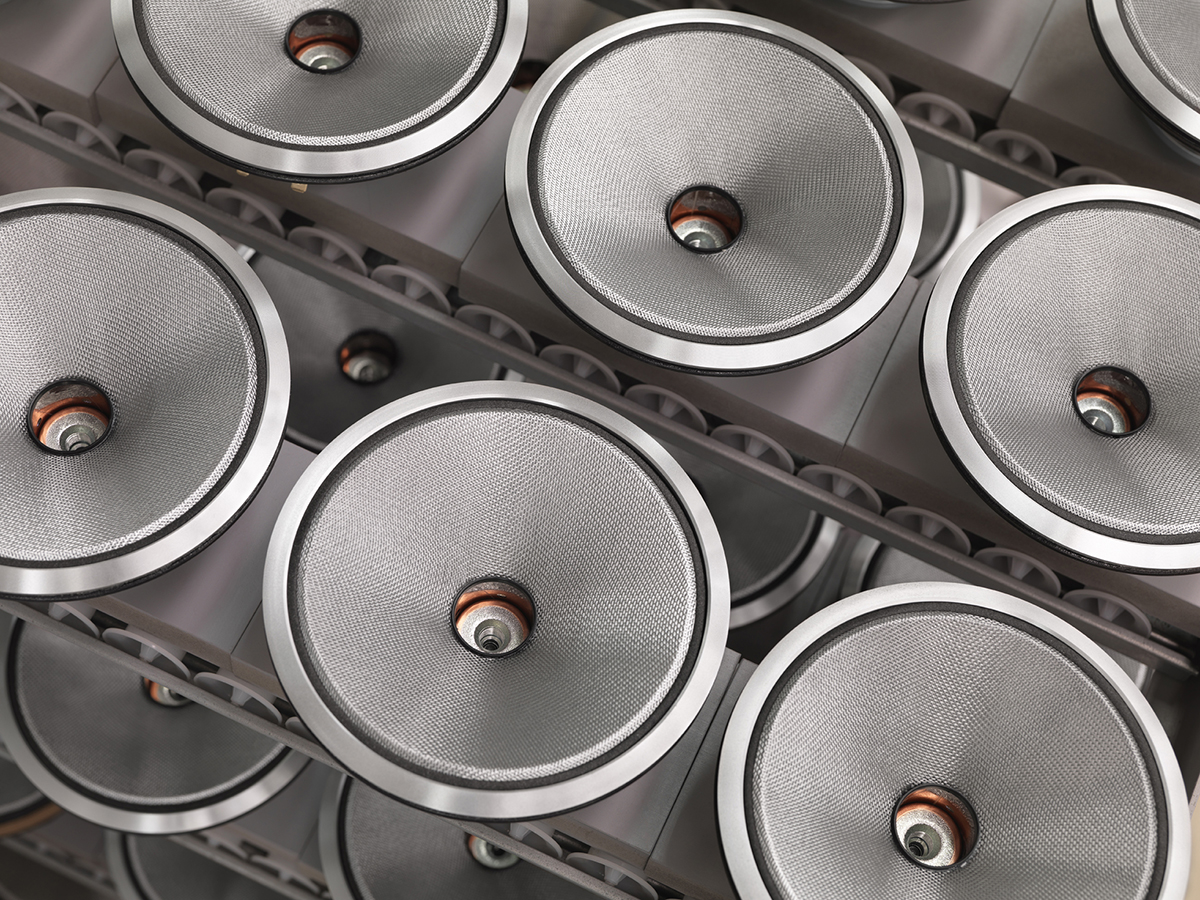 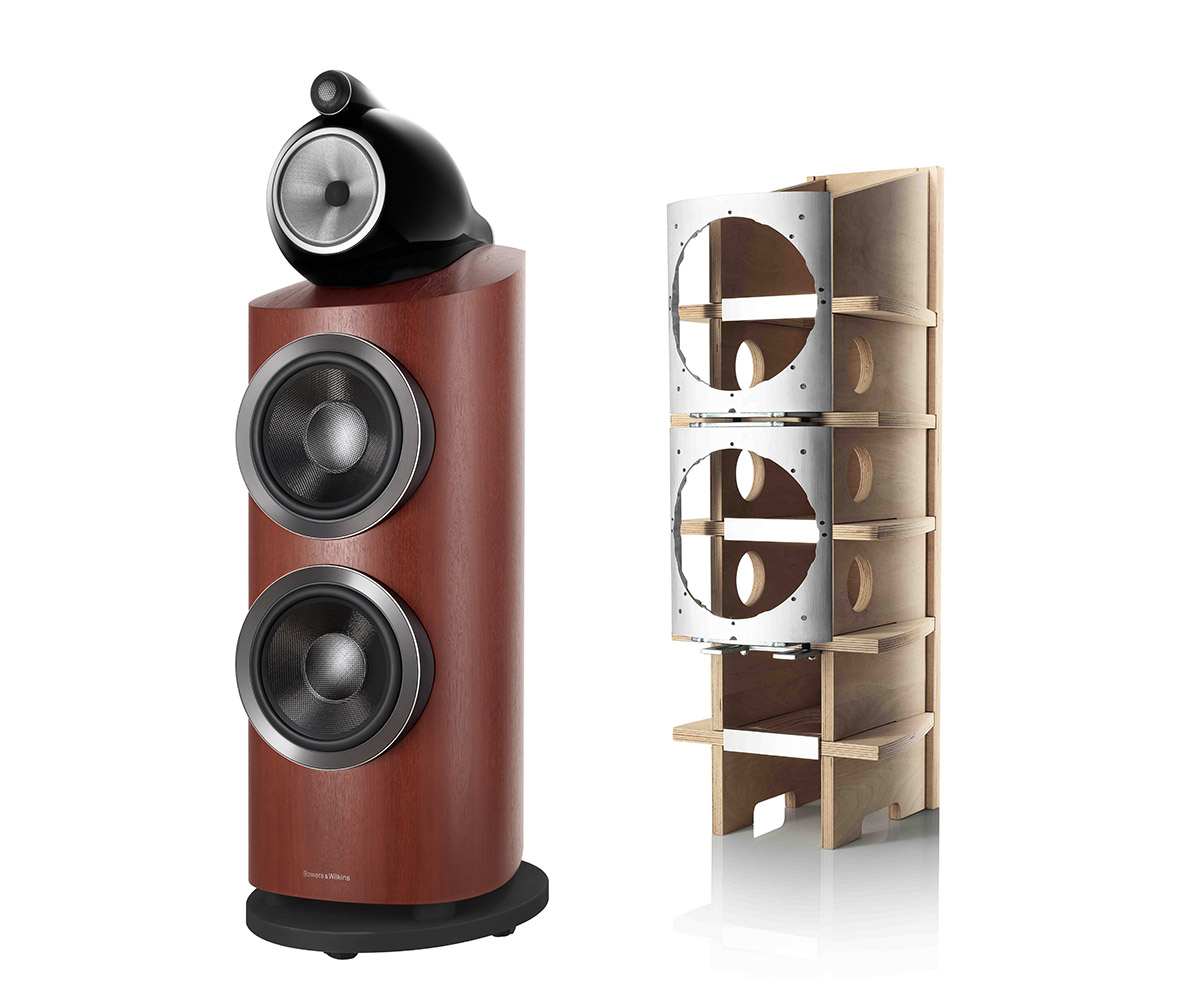 When it came to designing the ideal shape for the 800 Series Diamond cabinet, B&W did a U-turn. Quite literally. Instead of a flat-fronted speaker with a curving back, they produced a cabinet with a front and sides formed of one continuous curve, held together with a spine of solid aluminum. Fewer joins make for a stiffer, more inert structure, and a curved front means less baffling around the drive units. So sound dispersion is improved, and cabinet reflection is reduced.

The cabinet design also maintains the separate head units, introduced with the first 800 Series speaker in 1979. Now, thanks to a radical redesign, the 800 Series Diamond head unit performs even better. Constructed from a single piece of aluminum, braced with internal radial fins and with a raised, slimmer profile, the turbine head is almost totally inert, producing a sound that’s free from cabinet coloration.

The internal structure works like the bracing of a ship’s hull, with criss-crossed interlocking panels keeping the cabinets rigid and inert. For the 800 Series Diamond, the internal panels are thicker, solid plywood has replaced MDF, and metal components have been added to reinforce key stress points. By moving the crossover from the plinth to the main body of the speaker, B&W was able to create a base for the 800 Series Diamond that’s more stable and resonance-resistant than ever. Replacing the original open-box design, the new plinth is constructed from a solid piece of aluminum. This improves stability by lowering the centre of mass and counter-balancing the weight of the turbine head.

The base of larger 800 D3 is fitted with castors to allow maneuvering the speakers into position easily and all new 800 Series Diamond speakers now come with integrated floor spikes that can be lowered or raised.

The 800 D3 will be shipping in July 2016 and is priced at $15,000.00 each, available in Piano Gloss Black and Rosenut finishes.
www.bwgroup.com | www.bowers-wilkins.com
related items