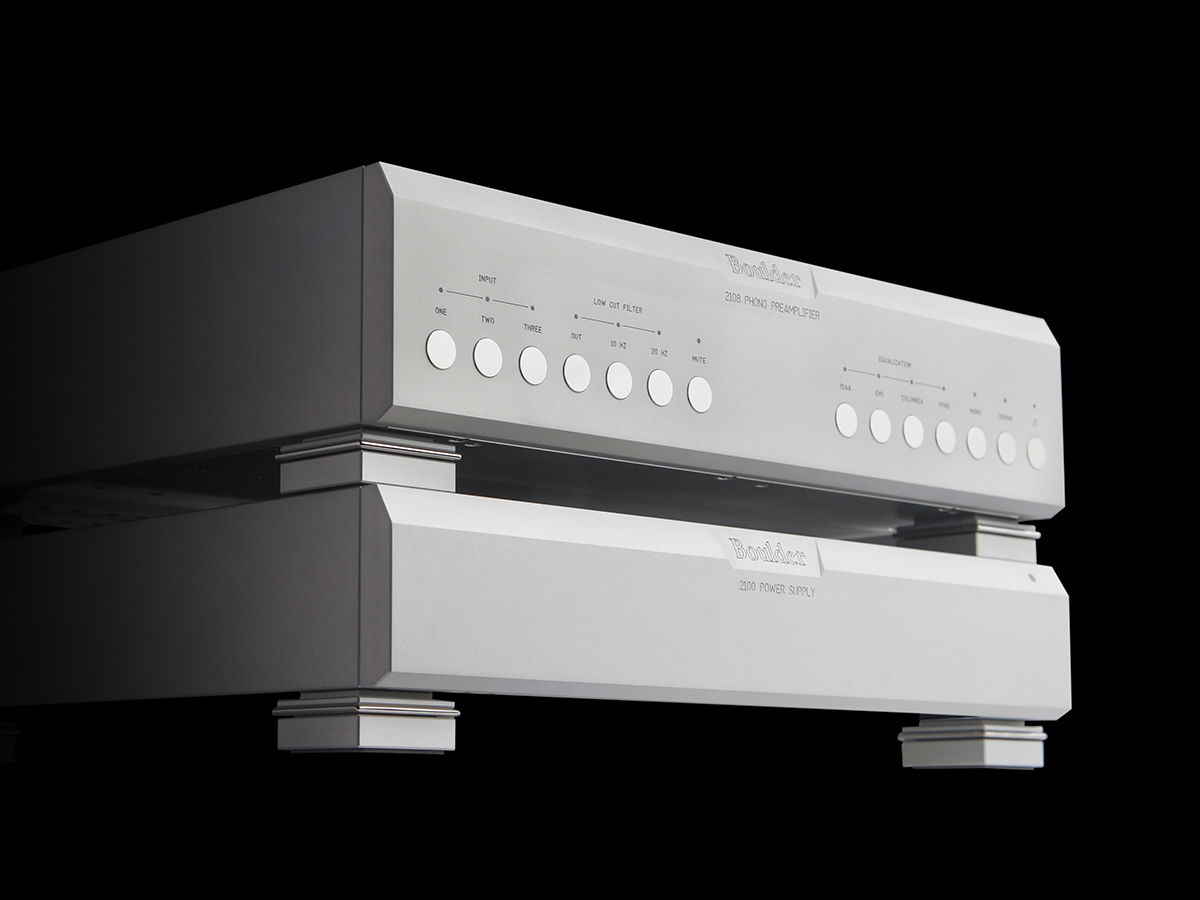 The 2100 Series is Boulder’s highest-performing product line in continuous production. The 2108 features several substantial advancements in technology and performance over the previous generation 2000-level phono preamplifier. Vast improvements have been made in sound quality through the use of better ground paths and planes, revised circuit topology, and lowering of the static noise floor.

Increased use of surface-mount PCB technology, manufactured on Boulder’s own SMD manufacturing machines and ovens has also yielded improvements in noise radiation, propagation delay, parasitic capacitance and the elimination of lead inductance in selected circuits. It also offers improvements in unit-to-unit quality and consistency with the added benefit of improved long-term reliability.

Features and improvements in the 2108 include the introduction of Multiple Equalization Curves. In addition to the standard RIAA EQ curve, the 2108 features three additional curves selectable via a front panel button: FFRR, Columbia, and EMI. These equalization curves enable correct and accurate playback of LP records made prior to 1954. An option on the 2008, these EQ curves are now included as standard on the 2108.

Boulder also introduced a Dual Chassis Design for the 2108. All audio electronics and control functions are contained within a machined aluminum chassis and all power supply and standby circuitry is housed in separate casework to isolate noise and prevent noise or hum from the power supply from interfering with sensitive high-gain audio circuitry. 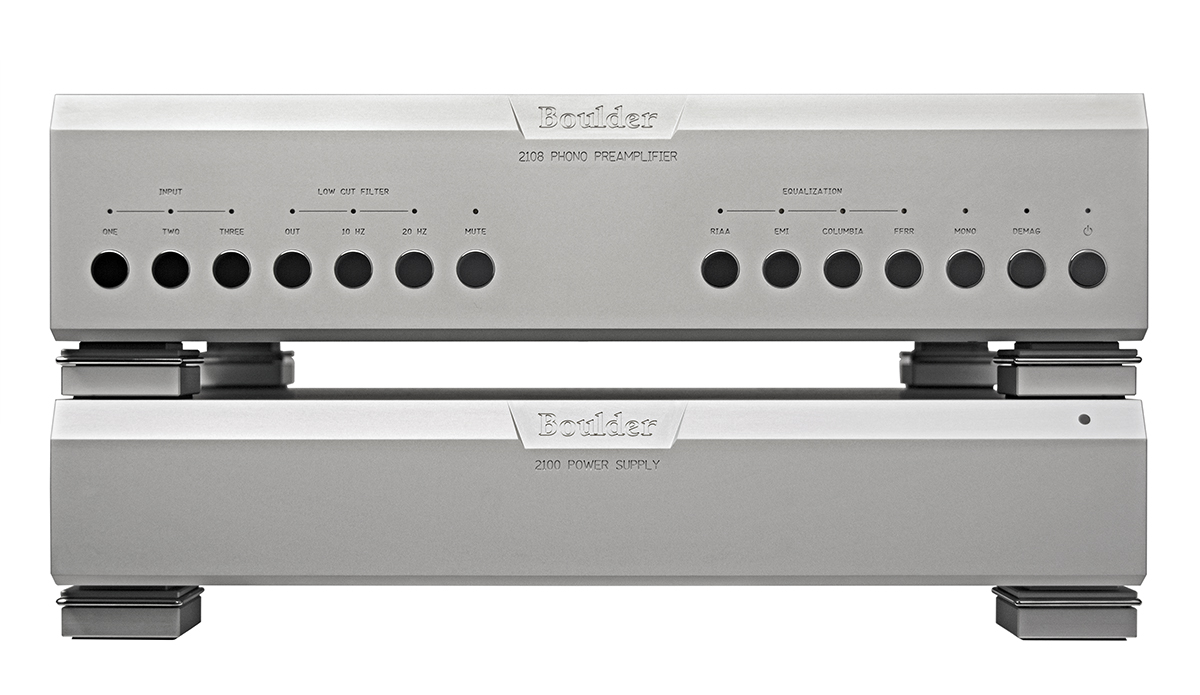 The reduction of the noise floor of the 2108 has allowed for an increase in gain (+10 dB) for low output moving coil cartridges without an increase in the noise floor. The net result is substantially improved low-level resolution and dynamic or transient response. The 2108 also uses Boulder’s own 995 gain stage, a modular, discretely implemented, initial gain stage for significantly reduced distortion and noise. This reduction results in substantial improvements in clarity and low-level information recovery. All 995 circuitry is potted in a proprietary epoxy resin for consistent thermal stability and increased reliability and then mounted in a precision-machined aluminum housing.

A pair of RCA connections is included on the rear panel to allow the use of an external cartridge demagnetizer for certain MC cartridges. Inputs and outputs are high quality, full-balanced 3-pin XLR connections and all audio circuitry is executed in a dual-mono configuration for increased isolation of the left and right channels. Three inputs per channel are available for connecting multiple turntables or tonearms, each with customizable “Personality Cards” which can be tailored to meet the resistive and capacitive loading needs of specific phono cartridges. Dual outputs are included to feed both a main listening system and/or a recording system. 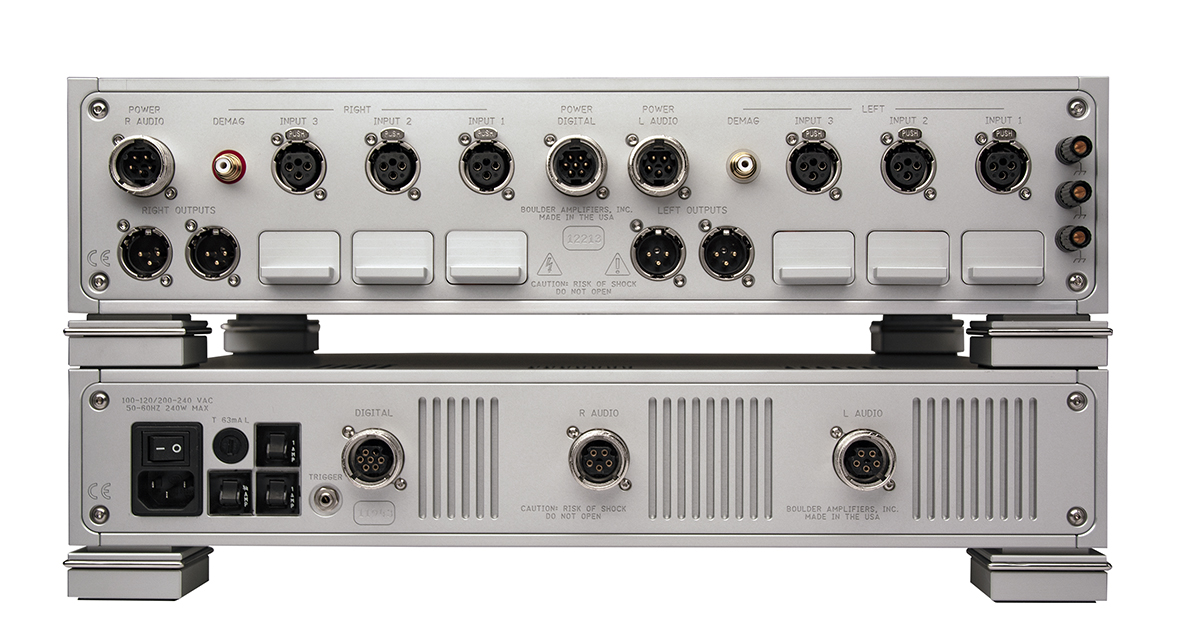 All functions and controls are actuated with a logic system to eliminate any internally radiated noise, such as that from a microprocessor, and all cartridge loading is handled by a single high-precision resistor instead of any type of switched or remote controlled loading system. The tiny analog phono signal is never run through any sort of switch or relay or multiple solder connections that would significantly increase loss and distortion.

Additional features include a selectable low cut filter with high-pass cut off points of 10 Hz, 20 Hz, or Out, selectable true mono mode for monaural recordings played on a stereo cartridge, and extensive damping and shielding for each of the main power transformers to eliminate hum pickup in the audio stages or audible chassis buzz.

The suggested US retail price for the 2108 Phono Preamplifier is $52,000. Export retail pricing will vary by country due to applicable taxes and duties.

Founded in 1984 as a manufacturer of broadcast and recording studio equipment, and transitioning later to fine home audio electronics, Boulder is one of the last remaining “high-end” electronics manufacturer in North America, and certainly the last to engineer and produce all aspects of its products in-house.
www.boulderamp.com
related items