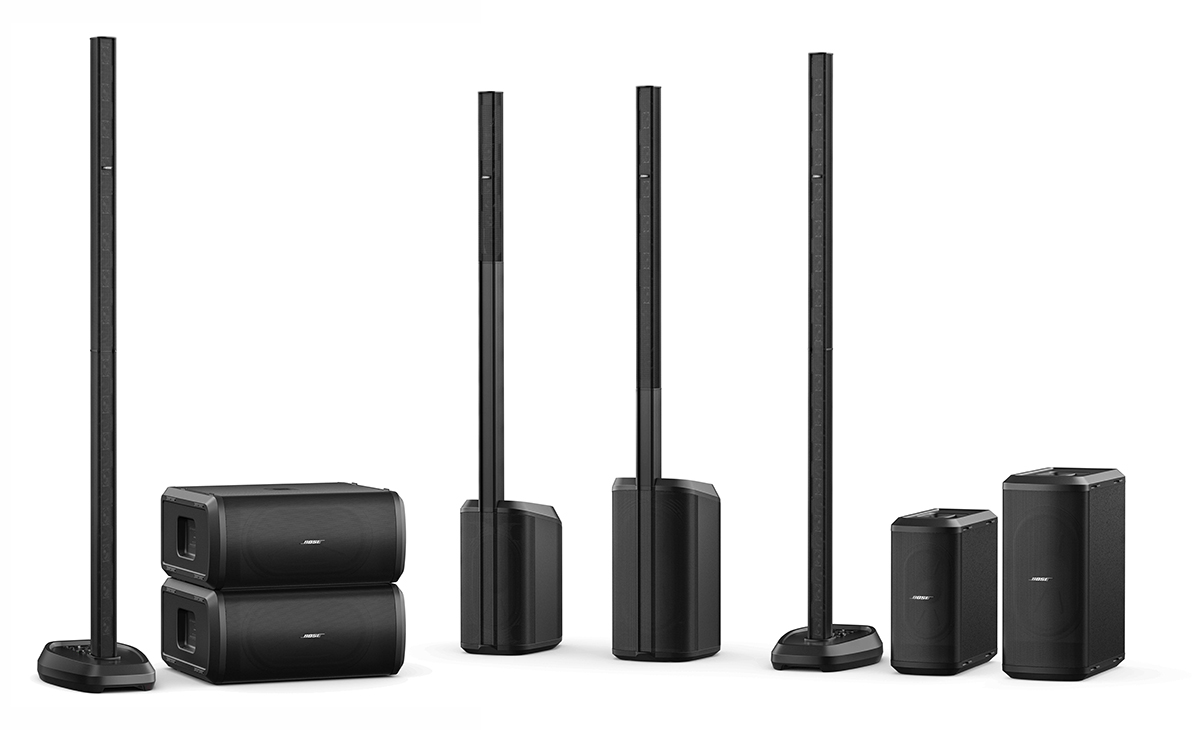 The original Bose L1 concept never really received much love from its intended user-base (musicians hated the idea of replacing their loved amp stacks, and sound engineers didn't really trusted a system that could be owned and controlled by the band), even if it did what was intended extremely well. Being ahead of its time (and place, apparently), the L1 systems were successfully adopted by rental companies and hotels who leveraged the solution for everything from weddings to corporate affairs. That success was in fact what inspired a long list of similar products and also straight copies, some of which must have been far more noticed in some countries than the original L1 ever was.

But that is no reason for Bose not to take credit for a successful design, and to continue to expand on the formula. The new L1 Pro systems effectively improve a lot on the original design, by basically rethinking every single aspect, from the speaker design down to the transducer lever, all the way to the interconnection of the elements and wireless control. The new Bose L1 Pro is also a much more ambitious concept, now introducing a very powerful L1 Pro32 model that effectively will compete in the public address space with many other products and will probably inspire new creative applications that Bose never intended.
But Bose continues to market the L1 Pro as an on-the-go audio system for singer-songwriters, mobile DJs and bands, which is probably the last segment that is going to take on the idea (the concept brings to mind the long-forgotten Line 6 StageSource concept).  Unlike the Bose S1 Pro Multi-Position Smart Portable PA System that everyone liked, and even a solo singer-songwriter could afford, musicians don't actually like a system that is intended for the whole band, and particularly one that intends to replace their precious individual gear on stage (except maybe the drummer, but no asks him), while DJs will simply laugh of the concept.

The good news is that everything in the L1 Pro will benefit any application really, and certainly the same weekend-event entrepreneurs that made money from the original L1, all the way to many venues and worship spaces that will finally see in the concept a complete solution for all their needs.

The new Bose L1 Pro concept is based on three basic systems — the L1 Pro8, the L1 Pro16, and the L1 Pro32 with its complement of two subwoofers. All modular vertical speaker designs offer 180-degree horizontal coverage and can be directly mounted or simply connected to the new RaceTrack woofer design. The subs are integrated into the L1 Pro8 and L1 Pro16 systems, which also combine all the electronics, mixer and connectors in the same bottom element, and are separate Bose Sub1 and Sub2 modular subwoofers for the L1 Pro32, providing extended base response in cabinets that can be stacked and are much easier to transport, carry, and fit onstage. Built-in multi-channel mixers offer EQ, reverb and phantom power, while Bluetooth streaming capabilities and access to a complete library of ToneMatch custom EQ presets, allow performers, the assistant tech-friend, or an actual sound engineer to quickly tune the system to sound right in any application.

The ultra-portable L1 Pro8 will be enough to generate sound reinforcement in very small clubs and intimate spaces, while the L1 Pro16 will provide sound to small-to-medium spaces. With its modular design, each system is easy to pack, carry and set up, and this new generation improves on the size-to-performance ratio. The more interesting new L1 Pro32 configuration is the one that many audio companies will be eager to explore, combining a portable system with enough power for entertaining considerable audiences and hotel ballrooms.

The Bose L1 Pro portable systems are complemented by the L1 Mix app, placing complete wireless control in the hands of users for on-the-fly tweaks via controls that are both intuitive and instant. Performers can adjust mixer settings via phone or tablet from the stage, or even walk the room, hear how the mix sounds, and fine-tune on-the-go. Volume and tone settings can be changed in the app as well, with users able to watch the LED encoder move to match — the mixer and app are always in sync, in real-time.

The L1 Pro8 features a C-shaped line array design with eight articulated 2" neodymium drivers and an integrated 7" × 13" subwoofer that features a high-excursion RaceTrack driver, able to rival a conventional 12" woofer in a smaller footprint.

The L1 Pro16 expertly balances power and portability, offering a streamlined system with high output and extended low frequency. It features a J-shaped vertical line array with 16 articulated 2" neodymium drivers, combined with an integrated 10" × 18" subwoofer base that Bose says is able to rival a conventional 15" woofer. 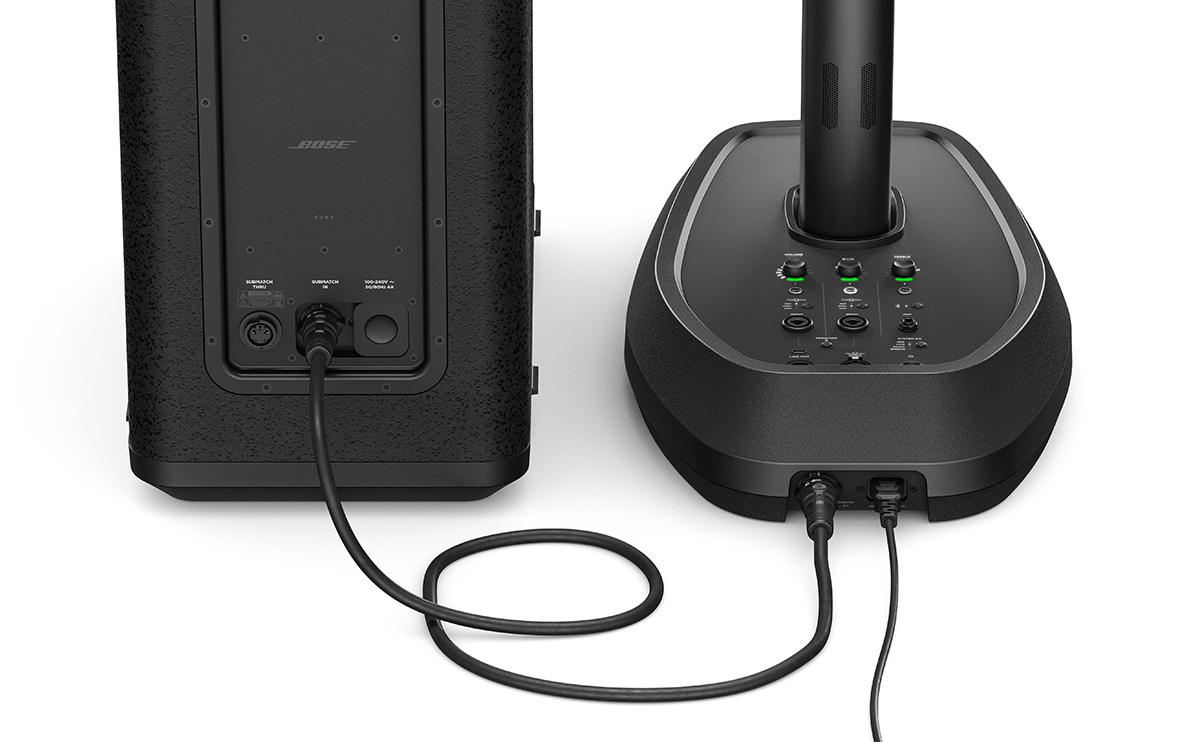 Finally, the L1 Pro32 weighs just 28.8 pounds (13.0 kilograms) and is the tallest of the range (still based on stacked modules), using 32 articulated 2" neodymium drivers. It needs to be complemented with either the Sub1 or Sub2 modular subwoofers to generate a full range response. The Bose Sub1 or Sub2 powered bass modules are connected via a single-cable for both power and audio and can be configured in Cardioid Mode to avoid bass energy to affect the stage. Each L1 Pro system features a built-in mixer, connecting instruments, microphones and other sources, while a dedicated ToneMatch port allows connecting additional Bose T4S or T8S mixers, if more inputs are needed. 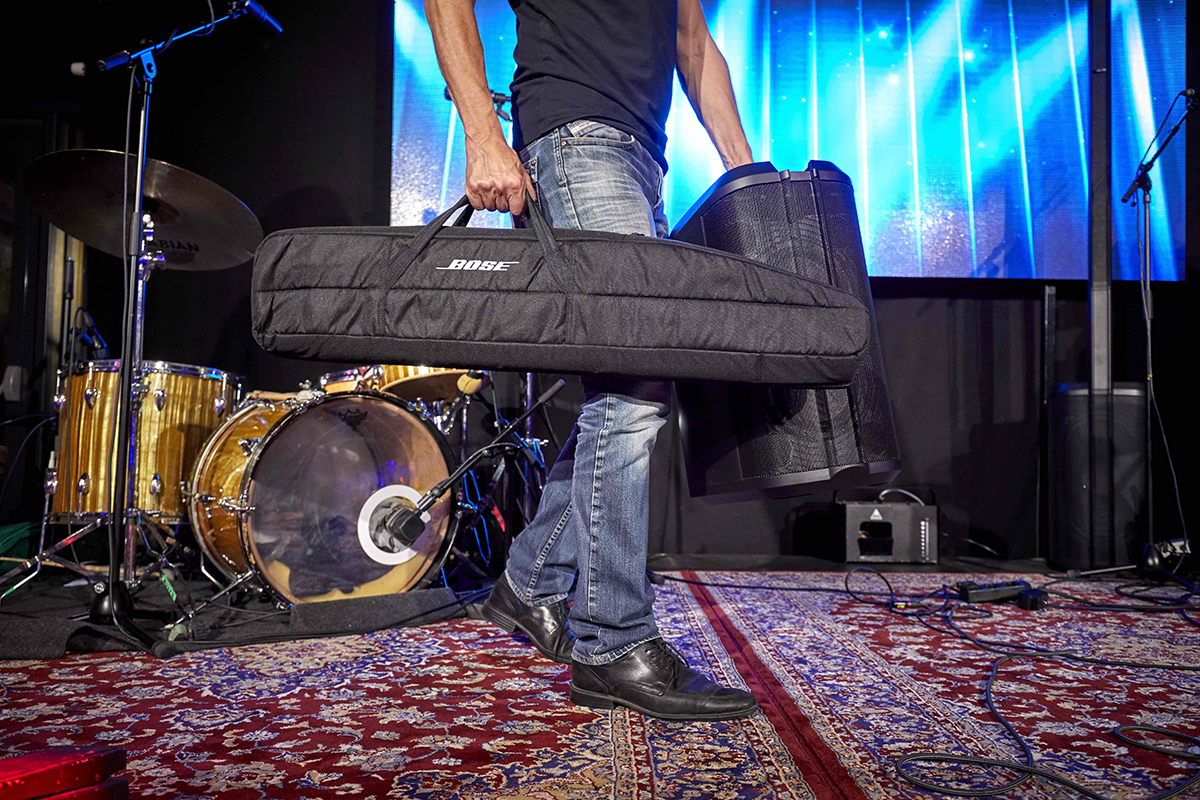