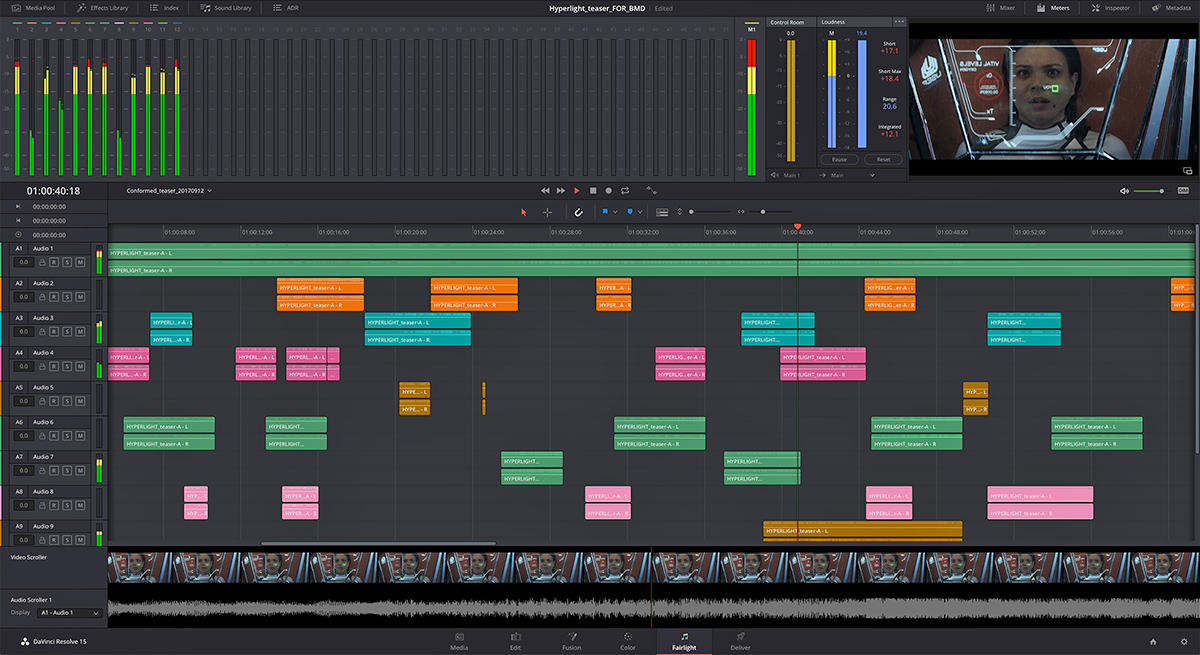 "Blackmagic Design would like to thank the users that participated in the beta, tested the software in a wide variety of workflows, reported bugs and have helped make DaVinci Resolve 15 even more reliable. The excellent feedback and strong community has been a critically important part of the development process. Blackmagic Design is grateful to have such a large and talented group of people that care deeply about making DaVinci Resolve the world’s most powerful post-production solution," the company states.

DaVinci Resolve 15 continues to revolutionize post production by combining 4 extremely high end applications as different pages in one single piece of software. The edit page has all of the tools professional editors need for both offline and online editing, the color page features the world’s most advanced color correction tools, the Fairlight audio page is designed specifically for audio post production, and the new Fusion page gives visual effects and motion graphics artists everything they need to create feature film quality effects and animations. All it takes is a single click to instantly move between editing, color, effects and audio.

DaVinci Resolve 15 adds an entirely new Fusion page with over 250 tools for compositing, paint, particles, animated titles and more. In addition, DaVinci Resolve 15 includes a major update to Fairlight audio, along with over 300 new features and improvements that professional editors and colorists have asked for.

The free version of DaVinci Resolve 15 can be used for professional work and has more features than virtually every other paid application for post production. DaVinci Resolve 15 Studio, which adds multi user collaboration, 3D, VR, dozens of additional filters and effects, unlimited network rendering and other advanced features such as temporal and spatial noise reduction, is available to own for only US$299. There are no annual subscription fees or ongoing licensing costs. DaVinci Resolve 15 Studio costs less than all other cloud based software subscriptions and it does not require an Internet connection once the software has been activated.

"The public beta of DaVinci Resolve 15 has been download more than any other release, customers have provided incredible feedback, and more high end editors are adopting it faster than ever before,” says Grant Petty, CEO, Blackmagic Design. “Customers get an incredibly mature and fast set of editing and trimming tools that rivals all other systems, the world’s most advanced color correction tools, a completely integrated digital audio workstation, and now Fusion visual effects and motion graphics. It’s unlike any other software out there and is redefining professional multi user workflows in Hollywood and around the world! Now teams of editors, colorists, sound engineers and VFX artists can all collaborate and work together on the same project at the same time, all in the same software application!”

DaVinci Resolve 15 also features a huge update to the Fairlight audio page. The Fairlight page now has a complete ADR toolset, static and variable audio retiming with pitch correction, audio normalization, 3D panners, audio and video scrollers, a fixed playhead with scrolling timeline, a preset library for equalizer, dynamics, plugins and global track properties, shared sound libraries, and built in cross platform plugins such as reverb, hum removal, vocal channel and de-esser. With DaVinci Resolve 15, users no longer have to worry about audio plugins when moving between Mac, Windows and Linux because the FairlightFX plugins run natively on all three platforms.

Improved performance when rendering H.264 clips.
Clip names can be added as part of a window burn.
Added support for HTML text formatting in subtitles.
Added support for 2D and 3D title templates.
Subclip extents can now be changed from the Edit timeline.
Dynamic Trim icon has been added to the toolbar with slip and slide indicators.
Audio automation data can now be edited on Fairlight page.
FairlightFX now include presets and users can now create their own.
Sound libraries can now be created using DaVinci Resolve disk databases.
Initial ResolveFX and OpenFX plugin support has been added to the Fusion page.
New bypass Color and Fusion effects button has been added to all pages.
Fusion compositions can now be copied and applied to additional clips.
MediaIn nodes now let users modify trim and media properties.
Saver nodes have been added to the Fusion page.
Clip level blanking output is now supported on the Color page.
Nodes can now be assigned custom colors on the Color page.
Compositing images with transparency has been improved.
Optical flow performance has been dramatically improved.
DCTL support has been extended and now supports ResolveFX.
On-screen control for OpenFX and ResolveFX are now more responsive.
Added support for encoding CEA-708 closed captions in MXF OP1a clips.
Added support for encoding EXR clips with alpha channels.
Added support for importing audio clip levels from AAF imports.
New French and Portuguese language localization.
Improved codec and format listing on the Deliver page.
Simultaneous monitoring of SDR and HDR for DolbyVisionTM and HDR10+.
New support for importing audio only AAF timelines.
New support for Final Cut Pro X XML version 1.8. 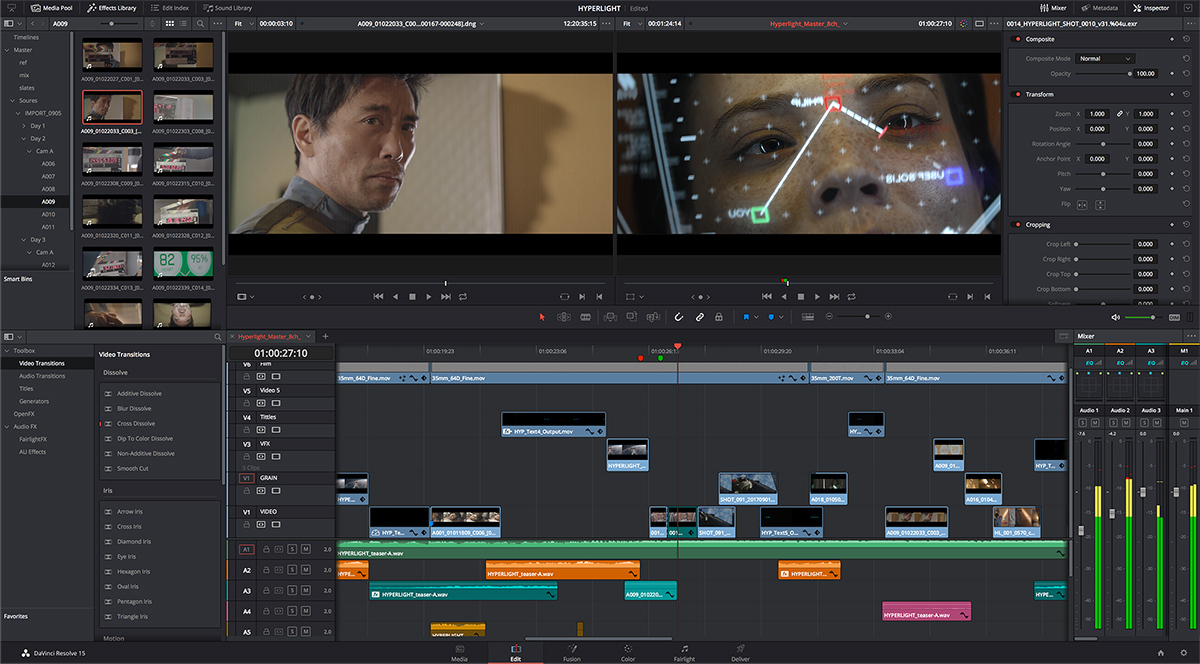 In addition, Blackmagic Design has also announced that its official step by step training handbook, “The Definitive Guide to DaVinci Resolve 15” is now available for order on Amazon.

DaVinci Resolve 15 runs on all major platforms, including Mac, Windows and Linux, making it easy to integrate with existing systems and workflows. Users running Red Hat or CentOS Linux can even build their own workstations using low cost motherboards, extremely fast processors, massive amounts of RAM and up to 8 GPUs for incredible real time performance.
www.blackmagicdesign.com
related items