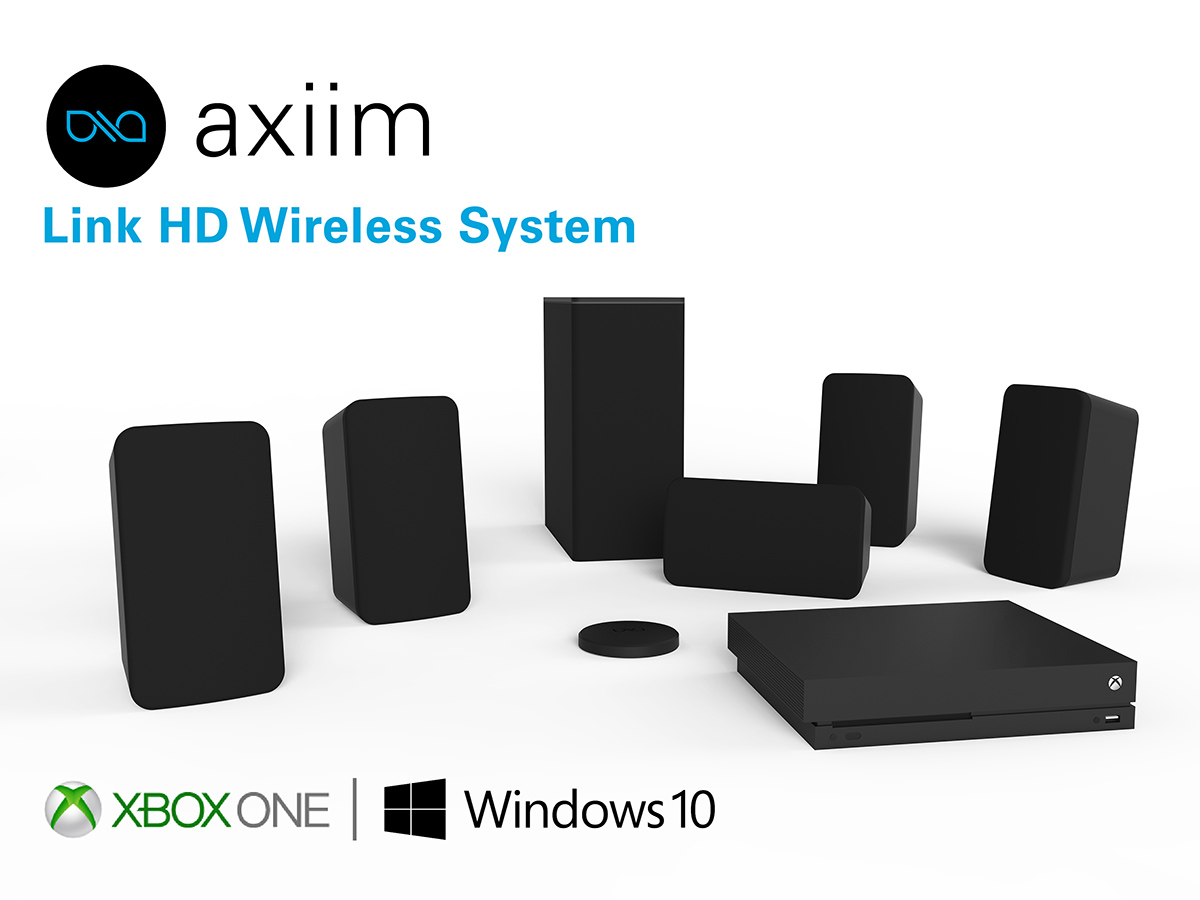 The Axiim Link HD Wireless 5.1 Speaker System is centered around the Link transmitter, a compact, multi-channel WiSA wireless home theater device that connects to an Xbox One or Windows 10 PC through a USB cable to deliver up to 7.1 wireless audio channels. The Link system instantly amplifies the stunning graphics of the Xbox One with an immersive wireless surround sound experience and takes only minutes to set up.

The Axiim Link creates a more powerful home entertainment platform for Xbox One and Windows 10 PCs, giving users an experience of surround sound audio as it was intended by game developers, musicians and storytellers. It brings to life 4K video and HD audio content of games, streaming services, and Blu-ray discs without the need for an audio/video receiver or running speaker wires.

This is the first (and only so far) Wireless Speaker & Audio Association (WiSA) compliant multi-channel wireless audio solution for Xbox One and Windows 10 PCs. Using WiSA technology guarantees a reliable, uncompressed audio transmission between the Link and the wireless speakers. The elegant solution eliminates the jumble of speaker wires and works seamlessly with all other WiSA compliant brands, allowing consumers the option to choose which speakers work best for them.

The Link was designed with the same technological expertise as the Axiim Q UHD Media Center, which recently received a CES 2018 Innovation Award Honoree. The Link is a small, sleek device which makes it easy to place virtually anywhere to optimize convenience as well as performance. The magnet in the base allows the Link to attach to the back of the TV easily and the chassis is finished with a highly desirable soft touch material available in a stylish matte black or white giving it a high-quality look and feel.

“As the fidelity of gaming has improved, so too has the production quality of audio, which is now as important an element of gaming as the filmic visuals of video games and the mechanics that drive play,” says Tristan Veale, Market Analyst, FutureSource Consulting. “Both Xbox One S and Xbox One X come with a built-in 4K UHD Blu-ray player and HDR support, reinforcing the importance of visual and audio fidelity for gaming.”

The Link utilizes USB 2.0 High Speed with 480 Mbps bandwidth to transmit eight channels of uncompressed 24bit/96kHz audio from an Xbox One or Windows 10 PC to the Link. Both the power and audio data are transferred over this single USB 2.0 cable. The Micro USB connector allows the Link to maintain a small profile while an integrated Bluetooth Smart module allows for connection to iOS and Android mobile apps for speaker configuration and audio control, including volume and EQ settings. Link houses an infrared (IR) receiver, which allows for integration with third party universal remote controls like the Logitech Harmony series.

“Adding the Axiim Link with wireless 7.1 speakers to Xbox One creates the ultimate 4K home theater gaming experience for any living room,” says James Hammer, CEO, Axiim. “The combination of wireless audio performance, a convenient, simple setup and reliability is what inspired us to design this product and we’re thrilled to bring Axiim Link as an Xbox-licensed product to both Xbox One S and Xbox One X.”

Axiim, headquartered in the Seattle area, designs and manufactures wireless home theater loudspeakers and audio/video media centers. The company is a member of the WiSA Association, as well as a Microsoft Partner and Intel Preferred Vendor. The Axiim Link HD Wireless 5.1 Speaker System will be demonstrated with Xbox One X at Booth #51669, Sands Expo, Eureka Park, Las Vegas, NV, January 9-12, 2018.
axiim.com
related items