Screen Excellence CEO Patrice Congard - known as the originator of the woven-fabric acoustically transparent film screen and also a seasoned loudspeaker designer - has developed Audio Excellence in 2015. With an established heritage of quality in the acoustically transparent film screen arena, Patrice Congard set out to design an extensive line of audio products that fully embodied his expertise and philosophy of audio technology. In 2016, Audio Excellence was launched, encompassing loudspeakers, amplifiers and DSP controllers which succeed in providing a complete Home Theater listening experience.

The Audio Excellence systems employ Patrice’s approach to loudspeaker design, layout logic and signal routing, all influenced from his experience in the pro audio world. The series consists of several limited-range loudspeakers, subwoofers, rack-mountable multi-channel amplifiers and DSP crossovers that can accommodate from 5.1 to complete 3D audio setups. The systems are designed to create the kind of continuous, high sound pressure levels and exacting bass experienced in commercial cinemas. All the components are rich in build quality and performance, competitively-priced - on average, MSRP for Audio Excellence systems range from $30,000 to $60,000 (US) based on size and surround configuration - and supported by a 5-year warranty. 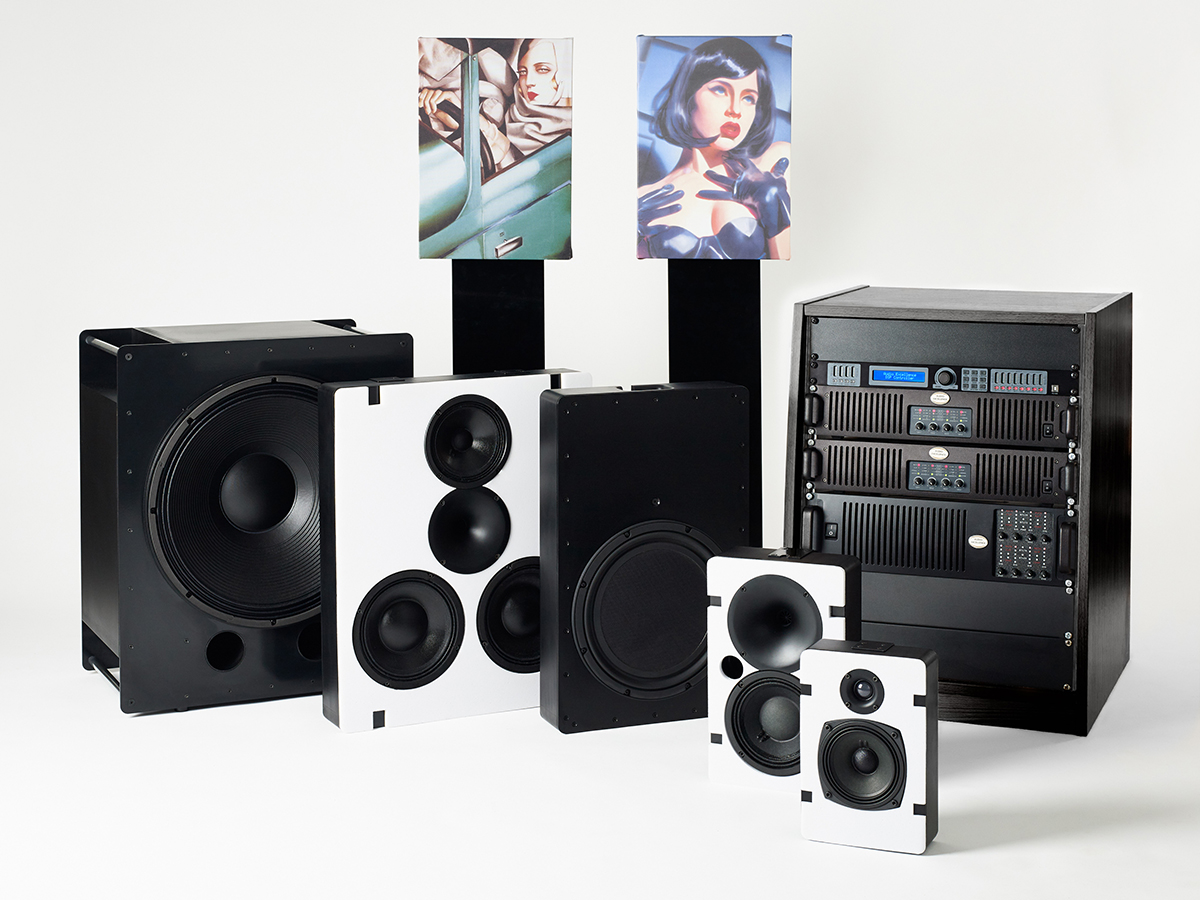 The Vertex series consists of three limited-range, high-SPL loudspeakers that operate from 100 Hz to 22 kHz and are coupled with a subwoofer via an active outboard DSP crossover. The speakers are slim, designed to be used in- or on-wall behind the A.T. screen and as surrounds. The Vertex enclosures are hand-crafted in England, with the front and rear of the enclosures made from steel for added structural rigidity. To thwart edge diffraction, the fronts are finished with absorbent foam. To blend with the décor, optional custom-printed artwork grilles are available. 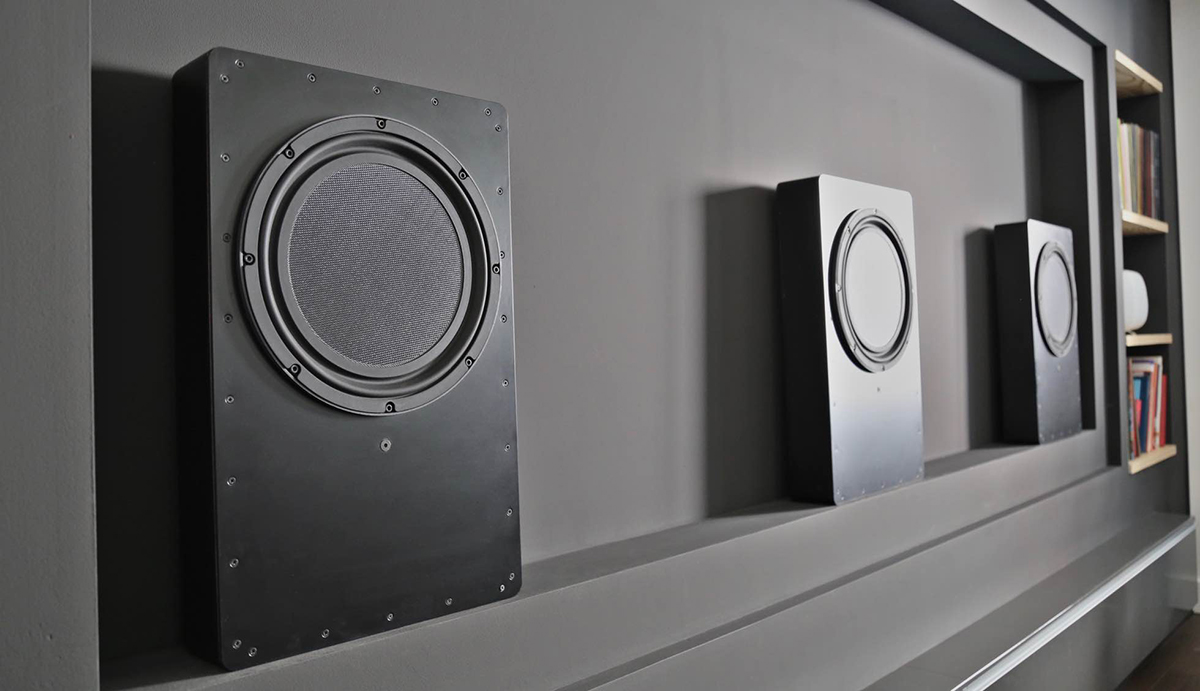 The Raijuu series consists of two compact subwoofers (Raijuu 1 and 2) that operate from 20 Hz to 100 Hz. Raijuu 2 is a vented sub, ideally used for reproducing the LFE channel. Boasting a professional 18-inch driver and power handling capacity of 1400 Watts, the sub provides maximum impact and SPL for the ultimate in LFE channel playback. Employing a 12-inch driver, Raijuu 1 is a small compact sub with 4-inch depth, shallow enough to fit in a drywall. For added rigidity, the front and rear of both models are steel.

To power the speakers, Audio Excellence designed the Quattro 06, a 4-channel amp capable of delivering high current and high voltage on 4 channels simultaneously, with an advanced class TD power supply. The amp delivers 4x600 Watts per channel in 8ohms, 4x1200 Watts in 4ohms, and 2x2400 Watts in 8ohms in bridge mode. Quattro 04 has the same design as the 06, yet a slightly lower power rating (400 Watts per channel) ideal for small systems surround or ceiling channels.

The Octo 05 is an 8-channel power amplifier operating in Class D. The amp delivers 8x500 Watts per channel in 8-ohms or 900 Watts in 4ohms. Its ultrafast switches afford a super low >109db signal/noise ratio, resulting in a natural, analog-like sound quality.

Designed for ultimate performance and ease of installation, the DSP Quattro 06 combines a digital active crossover with a 4-channel high-power amplifier. Extremely flexible, any of its 4 input signals can be routed to any output (or added on any single output) making it an ideal solution for powering the L,C,R channel speakers with an added channel bass extension.

The DP 48 MKII digital active crossover incorporates 4 inputs that can be routed to any of its 8 outputs. These signals can also be added on any single output. The unit features important DSP crossover functionality, such as parametric and shelving equalization, and delays.

Patrice says Audio Excellence does not advocate frequency equalization to correct room inadequacies. The company believes this colors the sound and is based around one position (seat) in the audience. Instead, Audio Excellence’s system approach concentrates on ensuring the initial wavefront reaches every audience member in the purest form possible, maintaining that room modes are solved using other means, such as acoustic treatments.

Expansion in US
Metro New York integration firm S.E.A.L. Solutions serves VIP clientele including athletes and Hollywood actors. “Whether we get called to design a theater from the ground-up or simply upgrade to 3D audio, the heightened realism of the Audio Excellence system is hugely exciting to our customers. The added bonus is that this helps me further differentiate S.E.A.L. from others,” says S.E.A.L. principal Chris Wyllie.