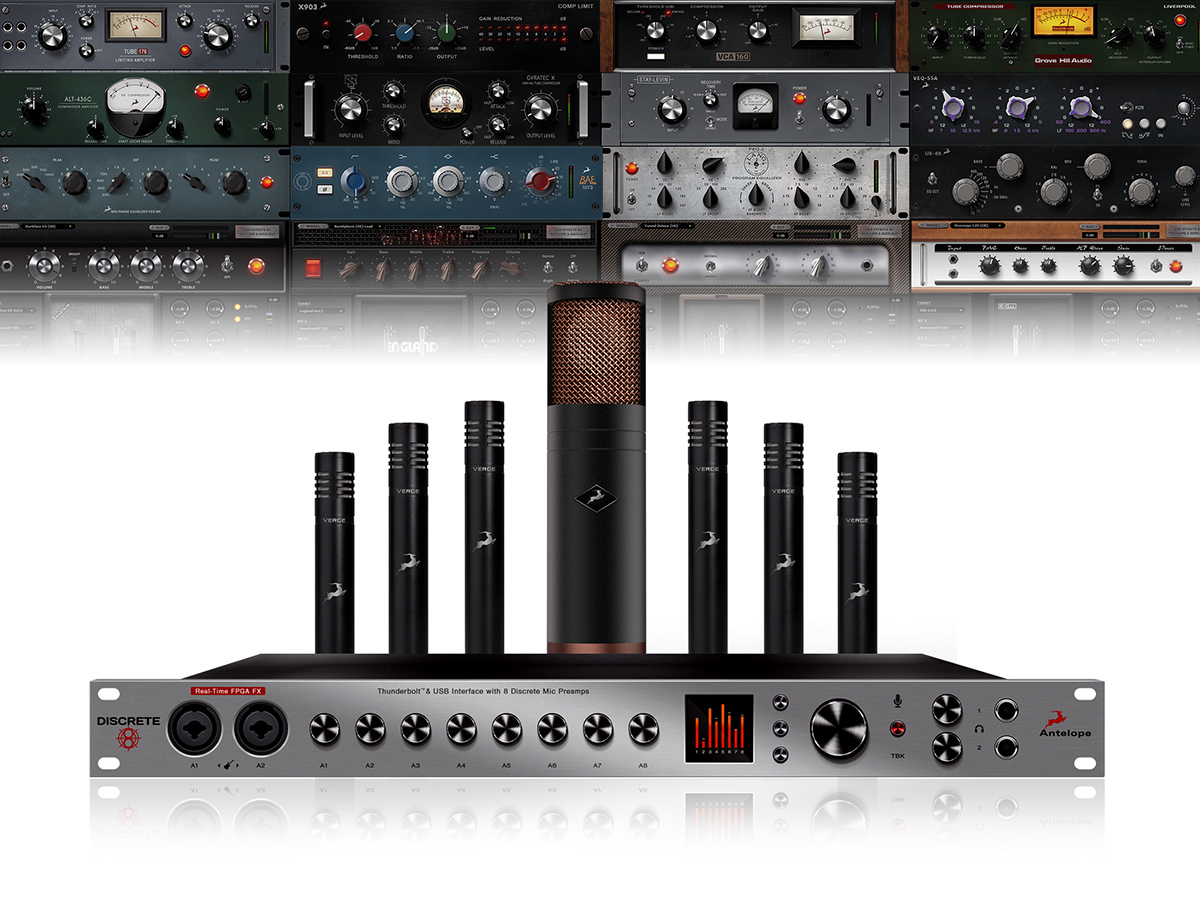 Being based on Antelope Audio’s AFX hardware modeling engine, enables Discrete 8 to add Accusonic microphone and preamp models, maintaining the advantages of digital control and repeatability of gain levels. It also adds guitar amps, transformer and tube effects alongside a huge selection of classic vintage gear. And thanks to Antelope Audio’s all-new ConnectAFX plug-in, all are accessible via any Digital Audio Workstation (DAW).

Discrete 8 users can create custom presets to easily and speedily set up various tracking scenarios. The front panel features a large monitor volume knob and dedicated HP knobs for each output. On top of that, the talkback microphone is also built into the front panel right above the TBK (talkback) button. Better still, talkback can be engaged via the assignable footswitch on the rear, in the EasyPanel software, or via the iOS/Android app. Meanwhile, metering is viewable on the front panel display, inside the EasyPanel, and also via the remote app.

The Discrete 8 interface also features 26-inputs/32-outputs, with eight analogue inputs (A1 through to A8), eight analogue outputs (on a standard 25-pin D-SUB connector), a pair of Monitor outputs, two Reamp outputs, and a pair of headphone outputs, with additional digital connectivity courtesy of S/PDIF IN and OUT alongside dual ADAT I/O.

Developed after extensive research of legendary microphone preamp circuitry, its fully-discrete preamps and Antelope Audio’s powerful FPGA (Field Programmable Gate Array) engine can transform the already expensive-sounding Accusonic preamps into several classic units via tube-, transformer-, and FET-based circuitry... all in realtime, and allowing engineers and performers alike to instantly compare blends of 10 different mic preamps — without any latency or annoying comb filtering. Still, the microphone source can be recorded with or without Accusonic modeling, allowing users to choose between preamp models during mixing.

With this package, users can choose from a collection of classic, costly microphones, then track the results while monitoring live to bring out the best possible performance. A single Discrete 8 interface, working with one Edge and six Verge modeling microphones, can capably run two chains of FPGA effects inserts and all microphone emulations for one mic. Discrete 8 can also save and load presets and exchange settings with Antelope Audio’s full lineup of FPGA- equipped professional audio interfaces, allowing existing owners using a second rig for touring or travel to leave their current studio setup untouched when on the road or engaging in session work outside their own facility.