Created in 1992 from the collaboration between French designer Bernard BYK and scientist and musician Michel DELUC, Amadeus is the manufacturer of such sophisticated systems such as the Philharmonia speakers or the Dante-networked enabled PMX D Series active speakers and the company is becoming one of the premiere manufacturers of high-end sound reinforcement systems for live and installed sound throughout Europe and Asia. Essential to the company’s foundation is the experience in acoustical projects for some of the most prestigious studios, concert halls, opera houses, museums, and research centers in France, as well as designing and installing reference studio monitors.

The “Théâtre National de Chaillot” is one of France’s five national theaters (public institutions whose missions are defined by the State). At its head since 2011 is choreographer and dancer Didier Deschamps under the tutelage of the Ministry of Culture and Communication. Located in a unique building of the capital, overlooking the fountains of the Trocadéro out to the Eiffel Tower and the Champs de Mars - offering night and day one of the world’s most famous views - this is also the place where the Universal Declaration of Human Rights was signed in 1948. The theater can accommodate every night more than 1,600 spectators in its three auditoriums. Its lobby also houses a large collection of sculptures, paintings, frescoes and pastels by some of the greatest French artists.

As the sound reinforcement system used in the Jean Vilar hall (1270 seats) was due to be replaced, Amadeus imagined a solution that would go beyond the limits of traditional technologies such as stereo, 5.1 multichannel format, or any conventional speaker system. As Denis Desanglois describes, “The Chaillot National Theater is one of the five national French theatres. For a long time, it was an iconic “theatre for the people” symbol, linked with famous names like Jean Vilar then Antoine Vitez. This place offers a large stage for dancers, with a viewing angle and a visibility on par with their vitality. Our continuing mission is to develop and to support creation and recognition of the works, and to foster their encounter with the widest audience possible.”

The implemented solution uses the Wave Field Synthesis (WFS) technology. Like visual holograms, this ‘holophonic’ process captures or creates a sound stage by preserving spatial information: the distance and direction of the sound sources used. “This technique allows to replicate the sound field’s physical properties. Wherever they are in the theater, the listener keeps a coherent perception of the sources’ localization,” explains Marc Piera, Chaillot National Theater’s Sound Department Manager.

“I personally consider that the systems using a single-dimension speaker network, like line arrays, are inept for sound reinforcement in most theatre buildings,” adds Piera. “These systems were primarily designed for open field concerts, where the audience area is very wide and very deep, and most of the time, on a flat or lightly sloped ground. They create a uniform sound pressure field, but most often they degrade the sound image for most of the audience. The Jean Vilas hall’s intrinsic technical, acoustical, physical and mechanical properties led us to prefer an original sound reinforcement system, based on a ‘holophonic’ concept. Listening conditions are thus identical for all spectators, wherever they are in the hall.” 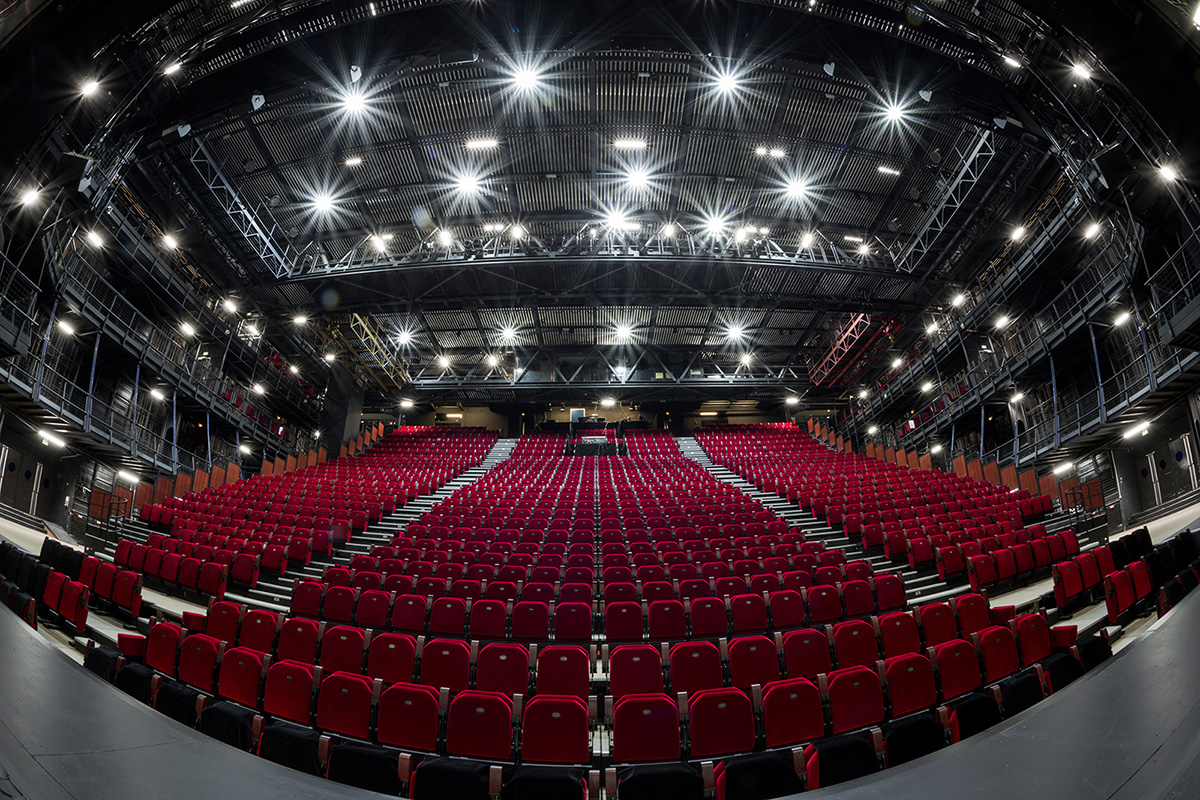 The Jean Vilar hall’s bleachers are segmented in four sub-spaces, each of different dimensions, seat numbers and slopes. The bleacher’s curvature is almost exponential, with 16°-, 23°-, 25°- and 35°-slopes. The control room sits 12 meters above the ground. The spectator area has a surface of 1122 sq. m (33m-deep, 34m-width).

“A traditional line source system, with constant or variable curvature, placed in a classical configuration, would inevitably have affected the sources’ localization, according to Haas' effect. In the 1940s, this German scientist established that a source’s localization is given by the direction of the first sound reaching the ear (direct sound). If the difference between the spectator’s position, the primary source and the secondary source grows, the this effect becomes stronger,” Piera explains.

Technical Manager, Denis Desanglois, adds, “We wished to abandon the stereophonic paradigm, the line array-type. So we implemented a WFS-based system prototype and asked the companies we were working with for their feedback. Initially, some technicians felt disoriented, but eventually everyone was happy, technicians and artists alike. The sensations of listening are completely different, wherever you are in the hall, you experience the same sound, that’s pretty amazing. We even integrated a 24-speaker ramp in the front end of the stage, to avoid the usual ‘sound hole’ first row of seats!”

Based on Huygens’ Principle (1678), the idea of Wave Field Synthesis (WFS) was developed in the Netherlands in the 1980s by the Delft University of Technology. The WFS concept makes it possible to synthesize “sound holograms” by simulating acoustic waves produced by virtual sound sources. To do this, the system uses a large number of loudspeakers, regularly spaced and used conjointly. They are each controlled with a delay and a gain to form a wave that emanates from the desired location of the virtual source. This process is repeated for each sound source in the sound scene. The major benefit of the WFS technique is to create a coherent sound field in an extensive area, therefore preserving the fidelity of the spatial image - the position of the sources - even for listeners located at the periphery of the zone or for listeners moving within the zone.

Michel Deluc, Amadeus’ R&D Manager, continues, “Edgard Varèse, one of the twentieth century’s pioneering composers in terms of sound spatialization, said a century ago: ‘tomorrow’s music will be spatial’. At Amadeus, we have believed in this statement since the Company’s beginnings, in 1992. We worked with the Institut de Recherche et Coordination Acoustique/Musique (IRCAM), to develop the multichannel sound spatialization equipment used in their Espace de Projection (ESPRO), and this led us to develop and install 339 custom-made loudspeakers. Transposing this technology for the Chaillot National Theater, thus allowing large audiences to experience it, is a thrilling and edifying challenge.” 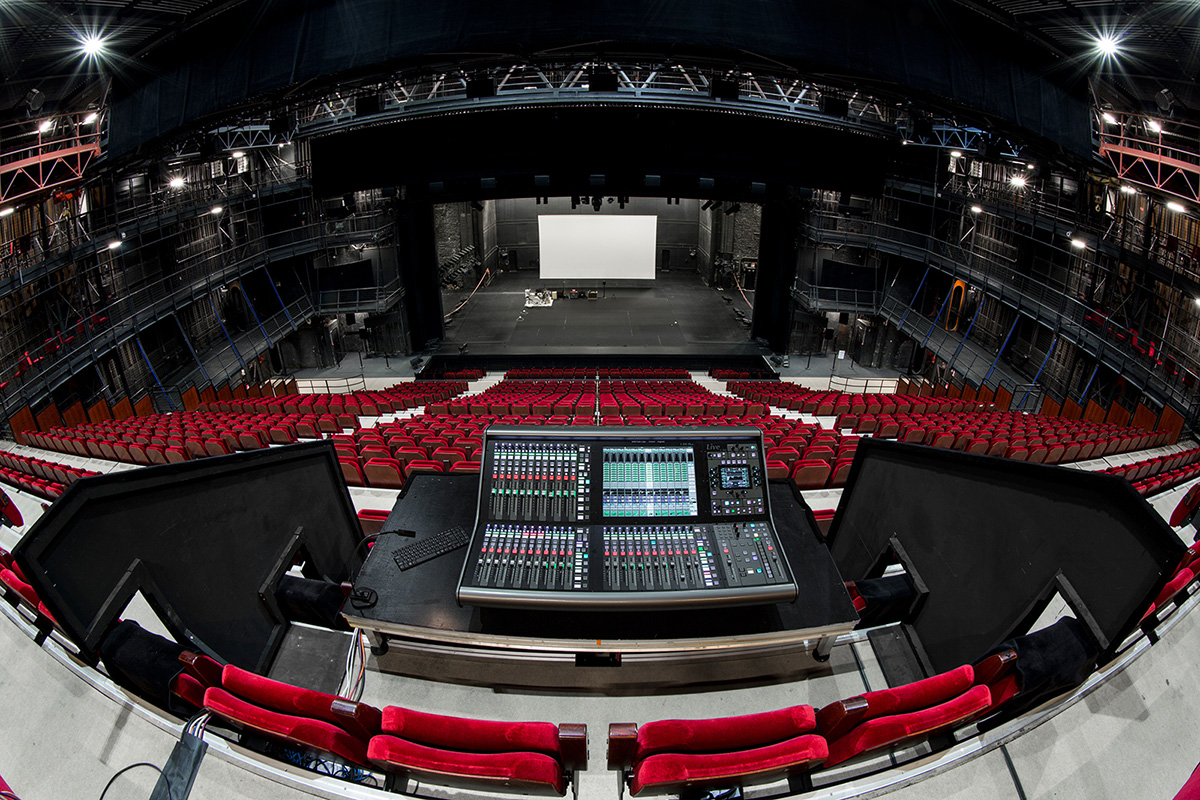 Speaker Placement
A first line of passive coaxial loudspeakers has been integrated in the front edge of the stage (in a 12cm-deep, 18cm-high volume). These 24 loudspeakers, variants of Amadeus PMX 4 model, form a large-scale “sound bar”; they are evenly distributed across 18m, with 75cm between each adjacent speaker. This first line seamlessly covers the first row of seats. 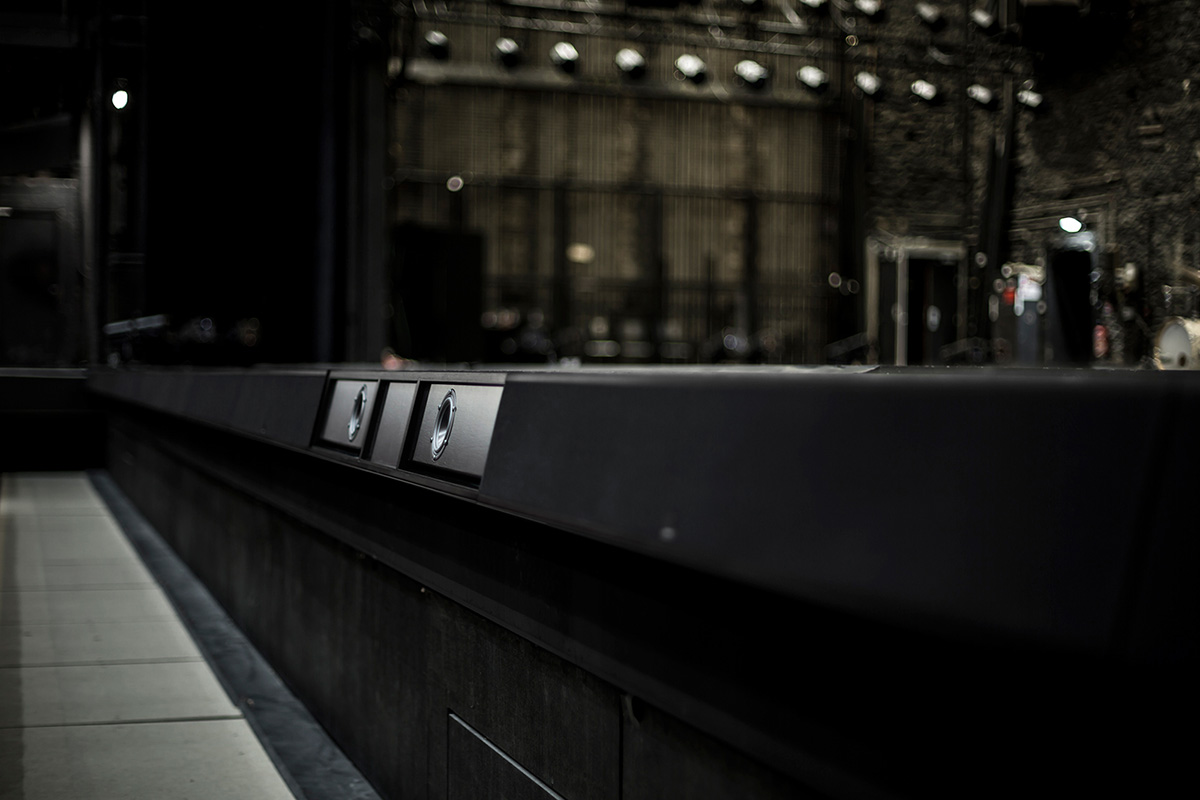 Piera adds, “Since the Renaissance, people placed close to the stage are, paradoxically, the less privileged spectators. Limelight, candlesticks or oil lamps, generated a dense fog, intruding between spectators and the stage. A few centuries later, this fog disappeared, only to be replaced by a “sound hole”. Electro-acoustical sound reinforcement aimed for these first-row spectators is often too inefficient, if not missing. Staging allowing, a small front fill speaker is tolerated at best. Here, Amadeus’ sound ramp is seamlessly integrated to the location’s scenography, and it’s perfectly dimensioned for our purposes; it redefines the perception of sound and, at last, offers these spectators a real sound and sensory privilege.” 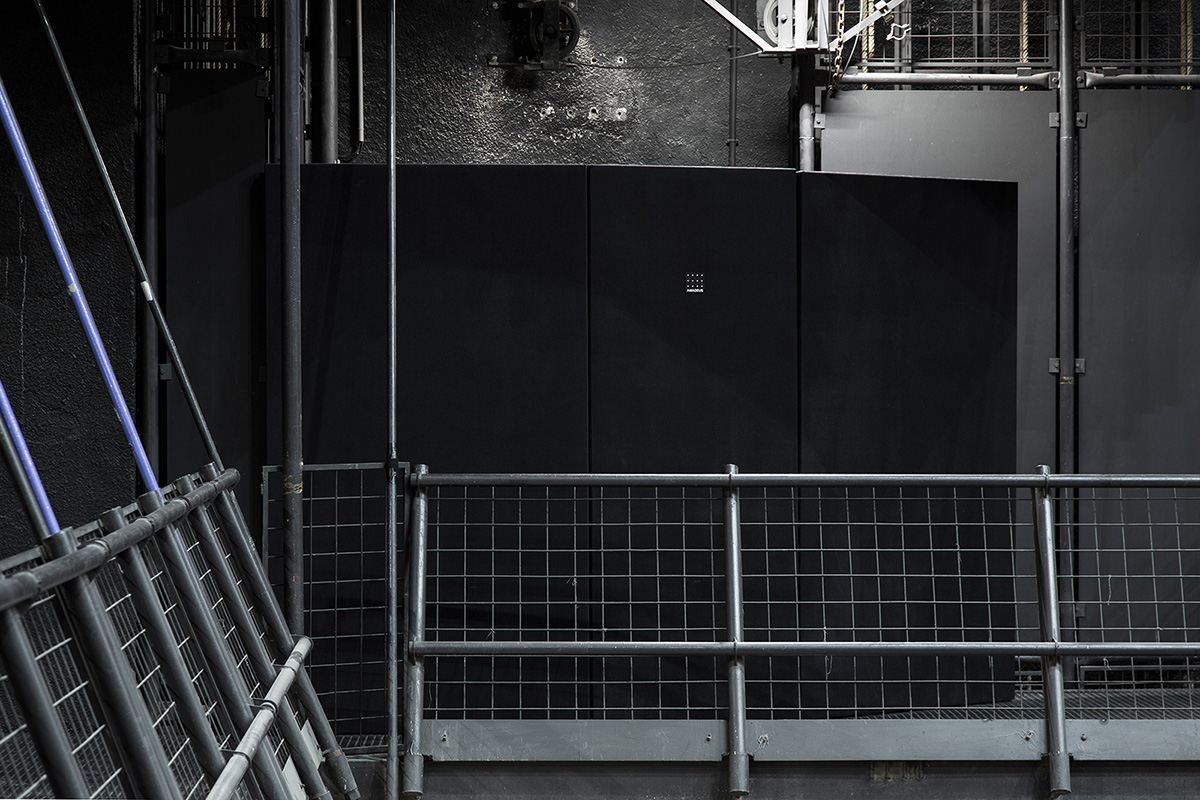 Philippe Guerinet, Director of International Sales for SSL and SSL France Manager, says, “We were impressed by the warm welcome received by our SSL Dante solutions in the live and broadcast sectors. With their Dante media networking technology, Audinate are clearly leaders now, with more than 350 manufacturers and more than 800 Dante-enabled products. Their approach is innovative, reliable and affordable in every aspect, the Chaillot National Theater install is an excellent illustration of this.”
“Audio over IP allows us to put the stageboxes where needed, with minimal and redundant cabling, and to connect on the network all kinds of Dante-enabled gear: Amadeus sound reinforcement system, SSL L300 console, SSL Network I/O stageboxes, and every other ancillary equipment needed. This network approach notably allows us to solve classic problems, like signal distribution without adding any TDM routers; there’s no loss, neither noise induced in the audio signals, and latency is particularly low. Last but not least, the technical solutions chosen by the Chaillot National Theater ensure total flexibility and an astonishing audio quality, for a surprisingly affordable budget,” states Guerinet.

Séverine Krouch, Sound Stage Manager, concludes: “The design philosophy brought by these two famous brands, Amadeus and Solid State Logic, with their sonic signature and their prestigious pedigrees, allow us to work every day with studio monitoring-grade sound, extended to a very large scale, and to innovate with the sound at the very heart of the artistic creation.” 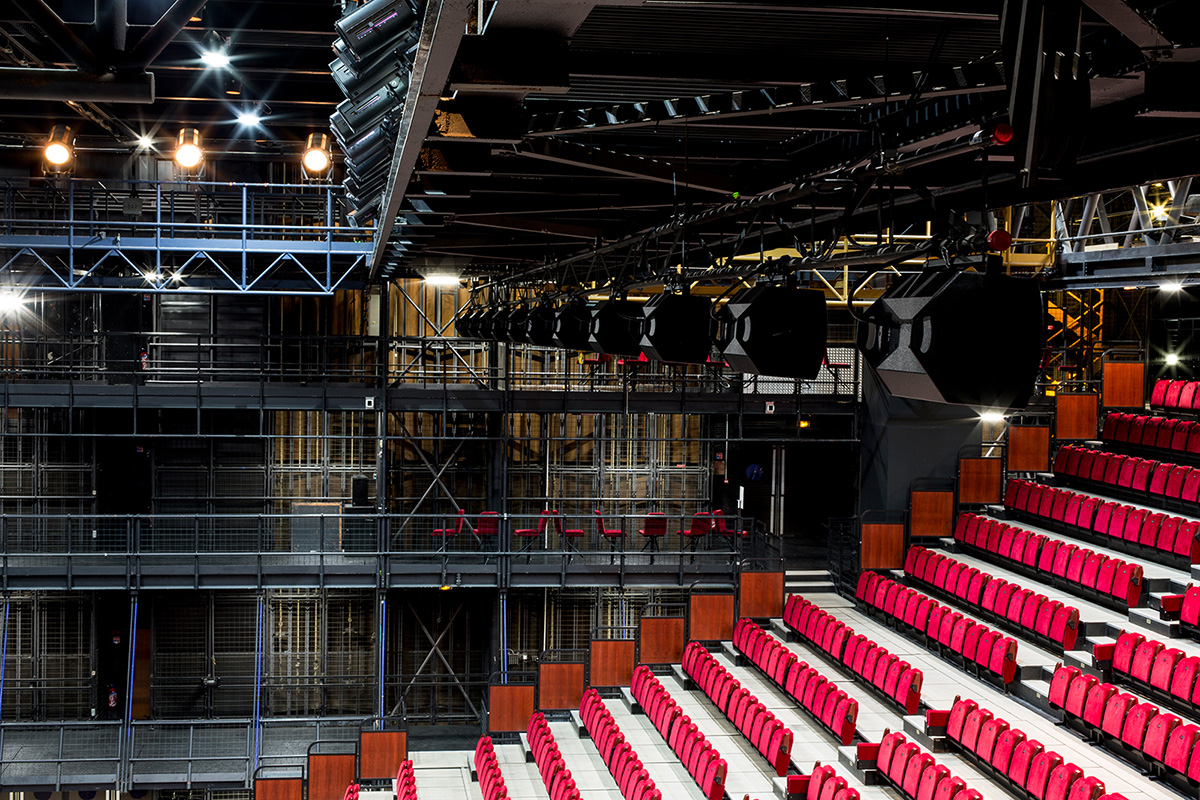