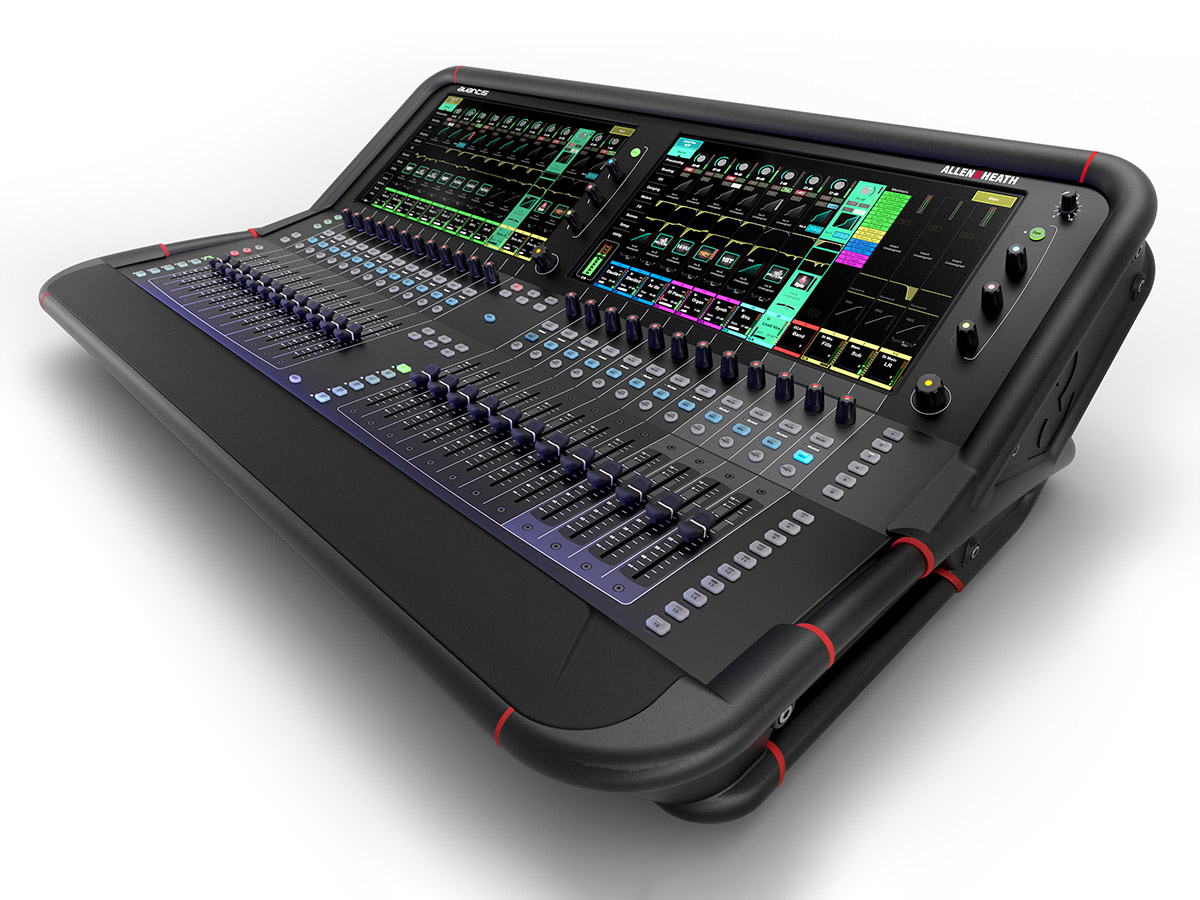 Within the sleek curves of the metal - but lightweight - frame, there's the XCVI Core, pioneered by the Allen & Heath R&D team using next generation FPGA technology, with parallel virtual processing cores generating enough power for 88×42 channels of processing at 96kHz sampling rate. The massive power of XCVI (25 billion operations per second) allows Avantis to deliver 64 full processing inputs and 12 stereo FX returns, 42 bus with configurable mix architecture, variable bit depth for ultimate precision and noise performance, a virtually infinite mix headroom thanks to a 96-bit accumulator, and class-leading latency at an ultra-low 0.7ms.

"Joining dLive and SQ, Avantis completes our trilogy of next-gen 96kHz consoles," says Rob Clark, Allen & Heath's Managing Director.  "Avantis takes many of the features that have made SQ and dLive so popular, putting them in a standalone 64-channel mixer that offers a new UI experience, connectivity with our Everything I/O ecosystem, and the dPack option which gives you access to our advanced dLive processing options if and when you need them.

"On top of that," adds Rob, "we've taken a new approach with the industrial design, coming up with a full metal chassis that’s super-strong, lightweight and looks fantastic."

The Avantis control surface is centered on the two Full HD touchscreens and their corresponding rotary controls. "Having two touchscreens isn't a new concept, but we realized we could use it to unlock exciting new possibilities, which led us to develop Continuity UI," says Andy Bell, Allen & Heath's R&D Director.

"Within seconds of getting hands-on with Avantis, engineers are going to appreciate the seamless flow between the physical controls and the on-screen software. You can work gains and pans on the rotaries, then at the touch of a soft key switch to EQ or dynamics across the whole strip. The console also provides a highly configurable FastGrab tab on the right-hand side of each screen, offering another way to quickly and easily access control of aux sends, EQ, compressor and FX on the currently selected channel or spot channel.

"Ultimately, with Continuity UI, the engineer decides how they'd like to work, not the mixer."

While many users will choose to pair Avantis with the 48 in / 16 out GX4816 standard audio expander, since Avantis is part of Allen & Heath’s Everything I/O ecosystem, it can also be connected to a huge range of audio expander hardware. For local I/O, Avantis is well equipped with 12 XLR analogue inputs, 12 XLR analogue outputs, plus AES (Stereo In, 2x Stereo Out). Two additional I/O Ports allow Avantis to benefit from the full range of current dLive option cards, including Dante (64x64 and 128x128), Waves, gigaACE, MADI and more, expanding the scope for system integration, FoH / monitor splits and multitrack recording. And Avantis is also compatible with Allen & Heath's range of ME Personal Mixers and IP hardware remote controllers.

Right out of the box, Avantis is loaded with processing tools designed to meet the demands of most users and applications, including compressors, EQs and Allen & Heath's acclaimed RackExtra FX units (12 slots). Upgrading to the dPack configuration expands Avantis further with additional dLive processing including the Dyn8 dynamics engine (up to 16 instances), DEEP Compressors, and the Dual-Stage Valve preamp. dPack purchasers will automatically receive all future DEEP and FX updates free of charge, future-proofing their investment.

"In the gap between SQ and dLive, the mixer market is littered with 48kHz DSP-based 'old-school' consoles,” says Nic Beretta, Allen & Heath’s Head of Product. “Avantis brings next-generation performance across the board. Customers in venues, houses of worship, touring and the rental market are going to be seriously impressed by how well this ticks the boxes. It's a really exciting mixer at a compelling price."