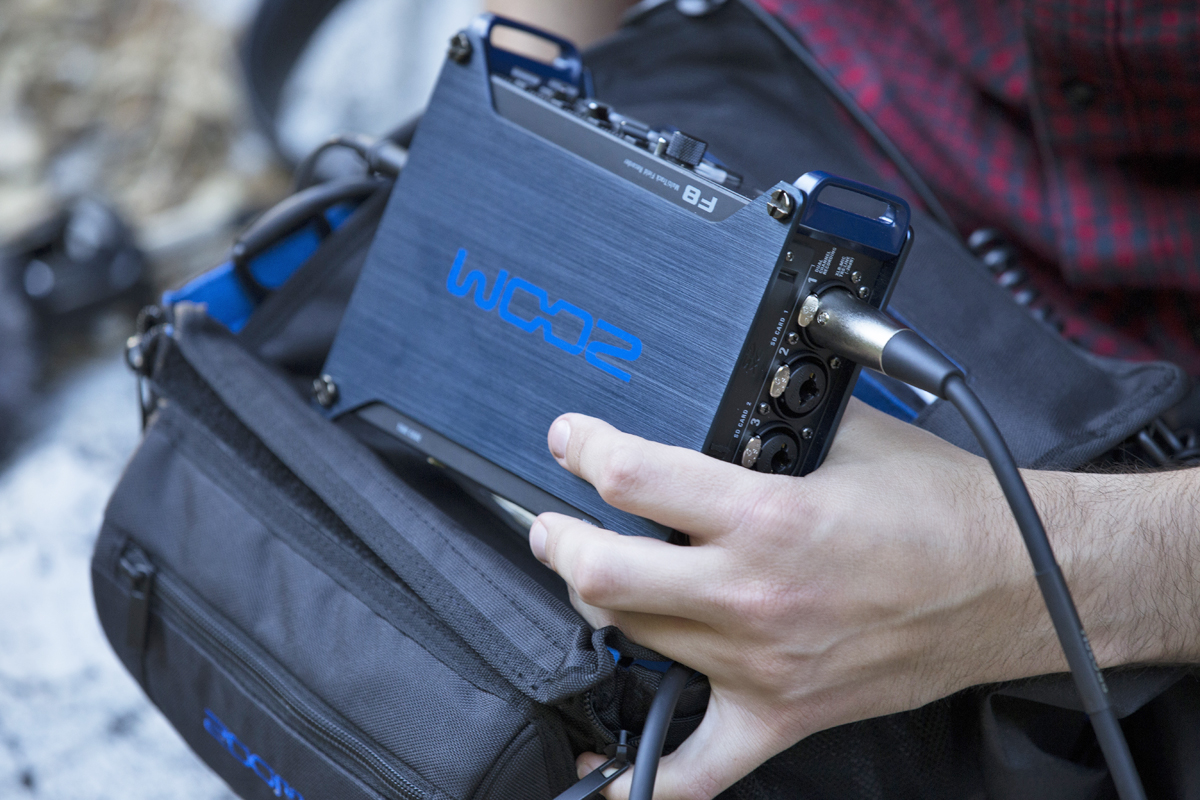 Designed for filmmakers and sound designers, the new Zoom F8 MultiTrack Field Recorder signals a new era for the Japanese brand, which typically targets the home/project studio market with its range of recording interfaces and competes with the likes of Tascam, Roland or Fostex in the mobile recording space. With its new F8 portable recorder, Zoom is now reaching out to users of Sound Devices or Zaxcom recorders, with an ambitious but competitive solution.

The F8 is equipped with 8 XLR/TRS combo inputs that utilize Zoom’s finest mic preamps to date. The F8’s preamps feature a super low noise floor (-127 dBu EIN) and high input gain (up to 75 dB), recording at up to 24-bit/192-kHz resolution. Weighing in at just over 2 lb (or less than a kilogram), the F8 is packed with features such as rock-solid time code at 0.2 ppm accuracy and dual SD Card slots, each compatible with SD/SDHC/SDXC cards of up to 512 GB.

Designed with multiple options for all professional field recording situations, the F8 records in BWF-compatible WAV format at 16 or 24-bit resolution, and at any standard sample rate up to 192 kHz. It also includes a stereo MP3 format mode, with bit rates of 128, 192, or 320 kbps for very long recording situations. The F8 can even be used as an 8-in/4-out USB 2.0 audio interface at 96 kHz), if desired.

Recording a total of 10 tracks — eight from input channels, plus a stereo mix track — the F8 allows simultaneously recording of stereo and surround sound. When selecting the 24-bit/192-kHz sampling rate, the recording is limited to 8 tracks, losing the extra stereo mix track. Recording is done on two SD/SDHC/SDXC cards, up to 512 GB each, simultaneously, allowing to instantly backup or split recordings (for example, save eight tracks onto one card and a stereo mix onto another).

Files are saved periodically during recording. This provides an extra level of protection in the event of unexpected file interruption, for example, power loss or the removal of an SD card. The dual-channel recording mode also allows creating safety tracks on inputs 1-4, each with independent level, limiting, delay, phase inversion, and high-pass filtering. There’s also a pre-record function of up to 6 seconds.

The F8’s onboard mixer enables signal routing from all inputs to all outputs, either pre- or post-fader, with user-adjustable level, pan, and input/output delay. In addition to advanced onboard limiters (which can be applied to all channels and tracks simultaneously), the F8 also provides high-pass filtering to reduce the sound of wind and other noise, plus phase inversion and Mid-Side decoding. The onboard limiters have 10dB of headroom and can be adjusted for setting threshold, attack, and release.

Useful features to deal with wireless transmitters and multiple sound sources include an input delay adjustable up to 30 msec per channel and an output delay of up to 10 frames per output. For synchronization with multiple cameras, there’s also a built-in slate mic/slate tone with a front panel switch. 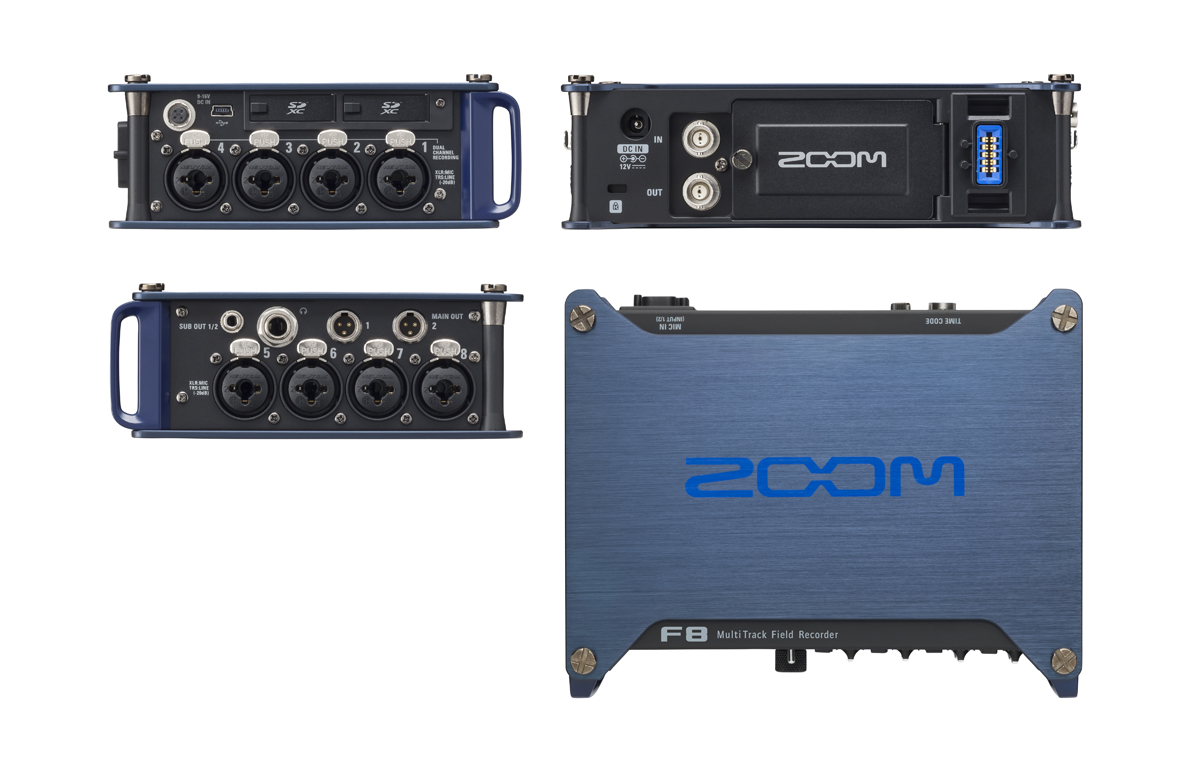 All input channels have phantom power (+24 V/+48 V), which can be turned on and off individually to support different types of microphones. The front panel level meters have adjustable brightness, while the 2.4" full-color backlit LCD (which can be set to monochrome mode), make the F8 easy to use in any environment — from low-light to direct sunlight.

A 4-pin Hirose connector allows the use of external 9-16 VDC battery packs. Internal power is provided by 8 AA batteries. The F8 can switch power sources from a DC battery pack to the AA batteries at a user-defined voltage level for uninterrupted recording. The F8 is supplied with a 12 VAC adapter.

To monitor the signals, there’s a built-in 100 mW headphone amplifier, with a dedicated 1/4” headphone jack with a front panel volume control. Signals can be freely routed to the left and/or right headphone channels, pre- or post-fader, and the headphone output can be switched to mono. 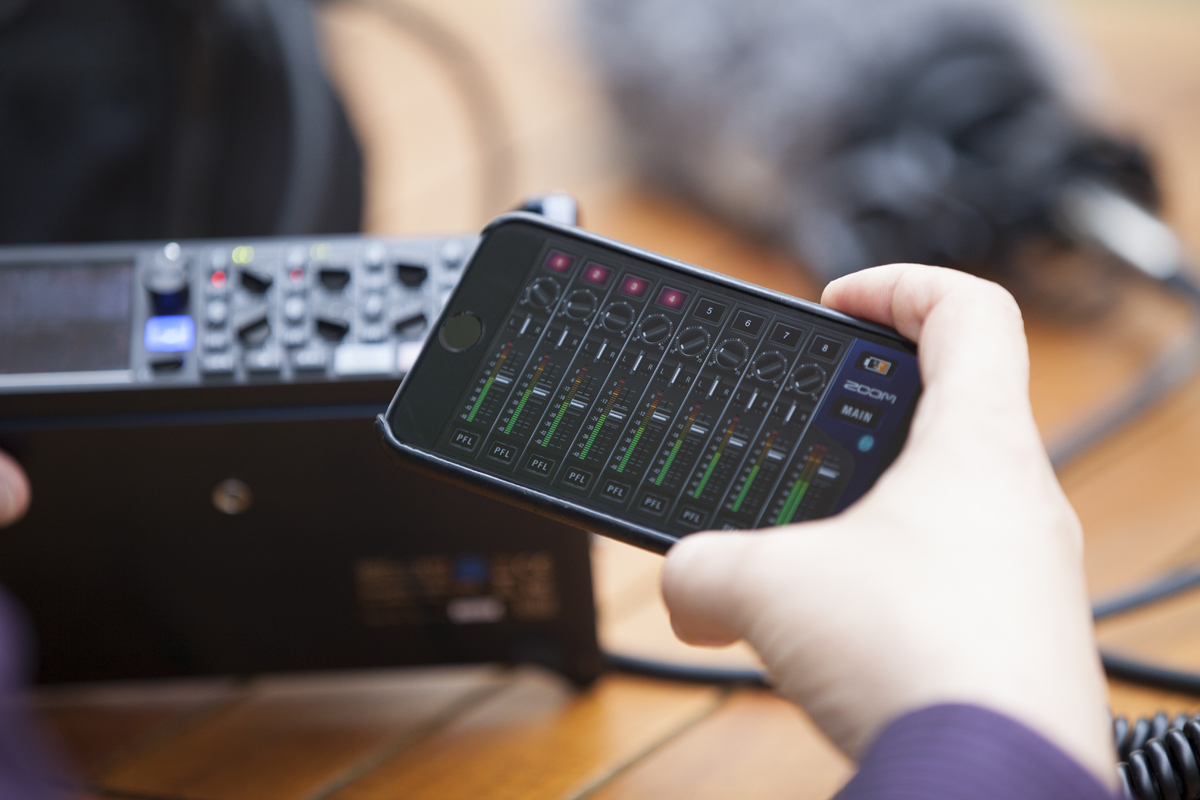 The F8 is also the first field recorder to come with wireless Bluetooth control. The Zoom F8 Control app provides control of the F8 from any iOS device via Bluetooth LE, featuring transport controls, level monitoring, and metadata editing.

Included with the Zoom F8 is a camera mount adapter, an AC adapter, two TA3 to XLR cables and a Steinberg Cubase LE and WaveLab LE license. Optional F8 accessories include a protective case. The Zoom F8 MultiTrack Field Recorder will be available in July 2015 for $999.99.
www.zoom-na.com/F8
related items