Headphone prices are coming down so manufacturers are differentiating product by packing in more technology, but are consumers aware of the benefits? Bluetooth - due to ease of use, convenience and mass market smartphone adoption - is the leading wireless technology, which accounts for 85% of the worldwide wireless headphone market. Headphones with microphones are also set to grow by 54% in volumes by the end of 2015, again due to ease of connectivity and adoption of smartphones. In terms of dual functionality, headphones and wearable fitness devices are starting to merge into products such as Tomtom Spark, reducing the amount of devices a user has to carry.

Those are some of the conclusions included in the latest Futuresource Headphones Market Report, which predicts that retail value of the headphones market will grow by 4% in 2015, reaching 9.8 billion dollars worldwide. “The average retail price for all headphones has fallen to $29.70 and this will continue to decline as competition intensifies and feature rich headphones fall in price. This could be good news for the consumer looking for a deal, even before the Black Friday sales start at the end of November,” comments Rasika Iyer Market Analyst at Futuresource Consulting.
Demand for in-ear headphones is expected to grow by 4%, driven by expansion of the market for wireless and sports headphones. On/over-ear headphones are also projected to grow by 9% in 2015 highlighting regional preferences in Western European and META (Middle East, Turkey, & Africa), where consumers prefer bigger headphones. Sports headphones are also projected to expand and are being predicted to take 7% of the worldwide headphones aftermarket.

North America and Western Europe are the largest sports headphones markets and are projected to reach 12.3 and 3.9 million units respectively in 2015. C.25% of the worldwide sports headphone shipments are wireless.

How the leading brands react to these trends in terms of product, and pricing remains to be seen. In H1 2015, Sony, Philips and Apple were the leaders in terms of volume with a total of 31% total share, whilst Beats, Bose and Sony took 55% of the market in value.

According to Jack Wetherill, Senior market analyst: Home Electronics, “Average selling prices are still rising in many regions - reflecting consumers’ appetite for better quality and additional features. At the lower end, this can involve inclusion of a microphone or wireless connectivity. At the higher end, features such as noise cancelling and High Resolution compatibility are becoming increasingly common. Many of the more expensive models are also bought partly for their brand caché.” 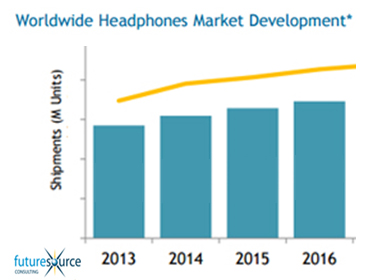 “The generally increased focus of retailers and consumers on headphones has attracted many brands into the business at all parts of the price spectrum. Any audio brand which can leverage its reputation by bringing headphones to the market will be seriously considering entry, but they know they have to pitch their product to the right audience at the right price. This implies offering design, features and performance that aligns with their broader product portfolio.”

“So – with the above in mind – it is not surprising to see launches of products such as Magnetic Planar headphones. They are obviously targeting a specific high end niche, but one of the great things about the headphones market is that there is such a range of products and price points to match growing demand across the spectrum,” adds Jack Wetherill.

“As for distribution, we note that the trend towards more feature-rich headphones has led to an expansion in the US and Western Europe in the share of specialist CE retailers (as they can generally offer more advice/support), whilst mass merchants have lost some share. Pure online retailers (such as Amazon) have also been growing their share, whilst the Telco retailers have also been expanding their role in selling headphones (a logical extension to selling handsets),” concludes Wetherill.