Voice Coil September 2015 Edition Is Ready for You!

In this issue of Voice Coil: Lookout for upcoming shows, CEDIA Expo in Dallas and the new Loudspeaker Sourcing Show in China. Mike Klasco guides us on a visit to YY, one of the largest diaphragm forming vendors. Test Bench features a 10” woofer from Morel’s Ultimate Titanium line, and a new 2” titanium compression driver from B&C Speakers. 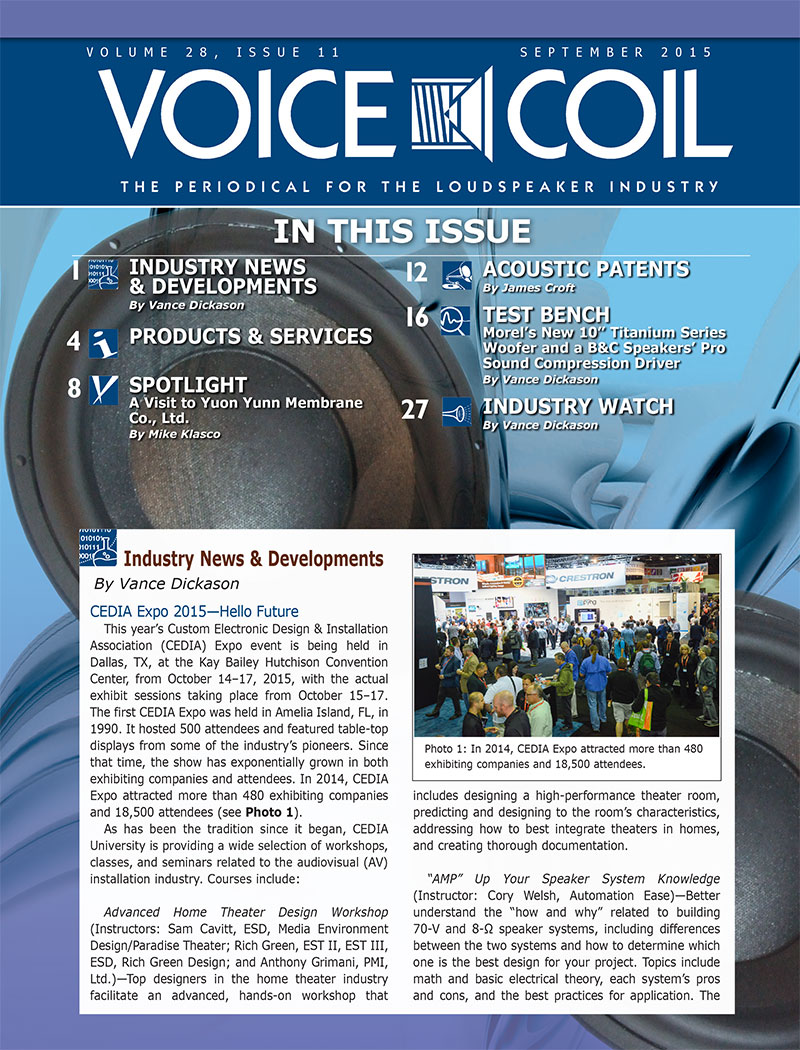 In this issue of Voice Coil’s Industry News & Developments, Vance Dickason highlights the 2015 Custom Electronic Design & Installation Association (CEDIA) Expo event being held at the Kay Bailey Hutchison Convention Center in Dallas, TX, , from October 14–17, 2015, with the actual exhibit sessions taking place from October 15–17. This is an exciting industry event for the loudspeaker industry, and occurs just prior to the 139th AES Convention at the Jacob Javits Center in New York (October 29-November 1, 2015).

In Industry Watch, Vance Dickason reminds our readers about two more upcoming loudspeaker industry events. The Loudspeaker Sourcing Show (www.loudspeakersourcingshow.com), scheduled for October 9–11, 2015, is the first show of its kind. A three-day event, taking place at the Nansha Grand Hotel in Guanqzhou, China, is designed to create a level playing field for the entire industry and serve up most, if not all, the solutions necessary for brands to do business with key industry suppliers.
Next, is a reminder to start planning for the ALMA International Symposium & Expo (AISE) in January 2016, prior to Consumer Electronics Show (CES). The Association of Loudspeaker Manufacturing & Acoustics (ALMA) International is offering early bird packages for exhibitors and visitors (www.almainternational.org).

In this month’s Spotlight, Mike Klasco guides us on “A Visit to Yuon Yunn Membrane Co., Ltd.”, one of the largest and most highly respected diaphragm forming vendors. You may have heard of the company, which is often referred to and recognized as “YY.” About 30% of YY’s production is for earphones and headphones, another 25% goes to mobile phone receivers and microspeakers, and the rest is spread across laptops speakers, military walkie-talkies, automotive infotainment, warning buzzers, and similar small transducers