November 2015 marks the beginning of Voice Coil’s 29th year as an information resource for the loudspeaker industry. So there’s definitely reason to celebrate and several good reasons to download the issue right now. Including a MEMS Microphone Status Update, Measurement Microphone directory, and Test Bench, which focuses on the UH205PW1 8” mid-bass driver from Motus. 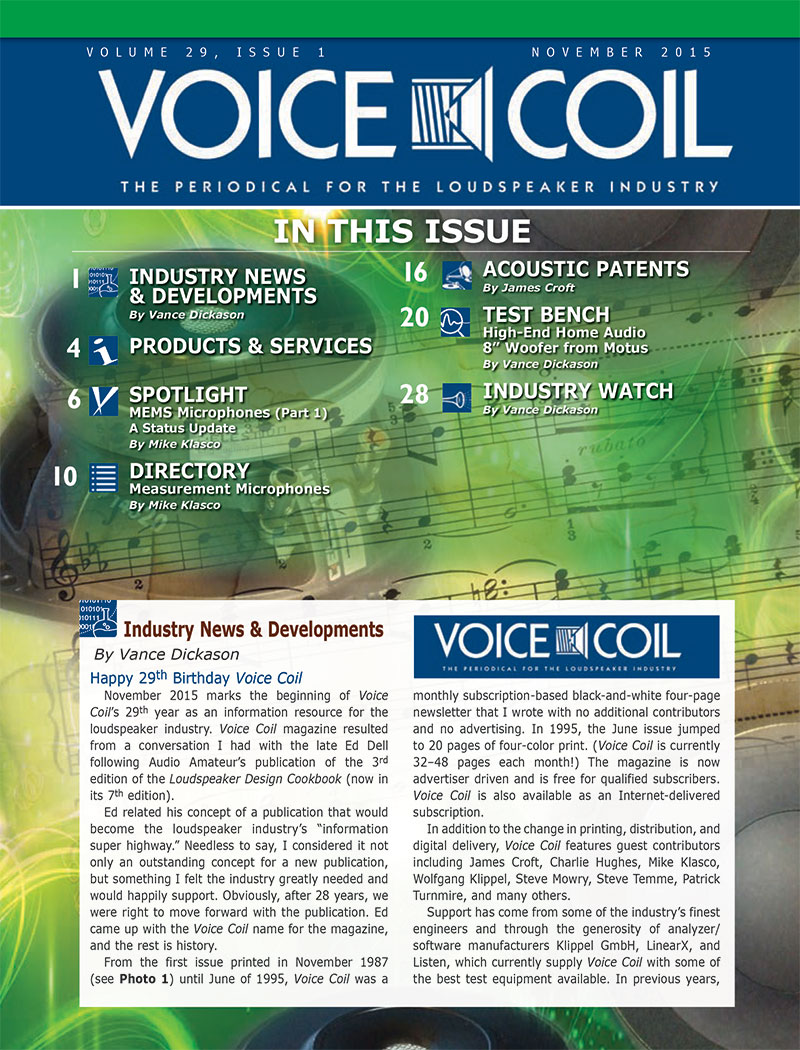 November 2015 marks the beginning of Voice Coil’s 29th year as an information resource for the loudspeaker industry. As Vance Dickason reminds us, “From the first issue printed in November 1987 until June of 1995, Voice Coil was a monthly subscription-based black-and-white four-page newsletter that I wrote with no additional contributors and no advertising. In 1995, the June issue jumped to 20 pages of four-color print. (Voice Coil is currently 32–48 pages each month!)”
“In addition to the change in printing, distribution, and digital delivery, Voice Coil features guest contributors including James Croft, Charlie Hughes, Mike Klasco, Wolfgang Klippel, Steve Mowry, Steve Temme, Patrick Turnmire, and many others,” adds Vance.

“Today, microphones are one of the best success stories in MEMS, with new uses being applied to voice command and noise suppression in mobile devices. In handsets, multiple microphones are being adopted in smartphones to cancel ambient sounds—crucial for handsets when carrying out voice commands (e.g., what Siri does in the Apple iPhones),” he details.

This Spotlight on MEMS Microphones will be followed in December by another Industry directory on Measurement Microphone Vendors.

This month’s Acoustic Patents by James Croft (Croft Acoustical) discusses a very interesting design of a “Loudspeaker Having a Passive Radiator,” which was granted a patent in August 2015, and names Gary A. Rayner (Henderson, NV) and James C. Larsen (Bothell, WA) as the inventors, on behalf of Treefrong Developments, from San Diego, CA.

The patent abstract details a loudspeaker with a rigid enclosure, and a sound projecting region formed in a wall of the rigid enclosure, using one or more active drivers to project sound outward from the sound projecting region and to reflect sound waves within the rigid enclosure. The loudspeaker includes flexible inner surrounds that frame each active driver speaker, and a passive radiator at least partially around the active driver speakers and connected between the inner surround and a flexible outer surround. The outer surround is connected with the rigid enclosure. Electronic circuitry of the loudspeaker includes an audio data receiver to receive audio data, one or more processors to process the audio data, and an amplifier to amplify the processed audio data for playback by the one or more active driver speakers. As James Croft reminds us, the concept seems to have been partially anticipated by formerly granted patents, describing designs with slightly different approaches but achieving similar results in an effective way.

Finally, Test Bench is dedicated to a new woofer from Motus, a fairly new company in the esoteric end of the home audio business. The transducer under test is the Motus UH205PW1, an 8” mid-bass driver.

Expand Your Horizons in Speakers with Voice Coil September 2020