Get your agenda ready for the 2016 National Association of Music Merchants (NAMM) Show in Anaheim, CA, and the Integrated Systems Europe (ISE) trade show, being held February 9–12, 2016, in Amsterdam. Read about a new transducer technology from Christianson Audio, and a great reference article on “Micro Suspension Part Measurements.” This month’s Test Bench characterizes a high-end 5.25” mid-bass driver from Motus Audio and a Pro Sound 10” woofer from MAG. 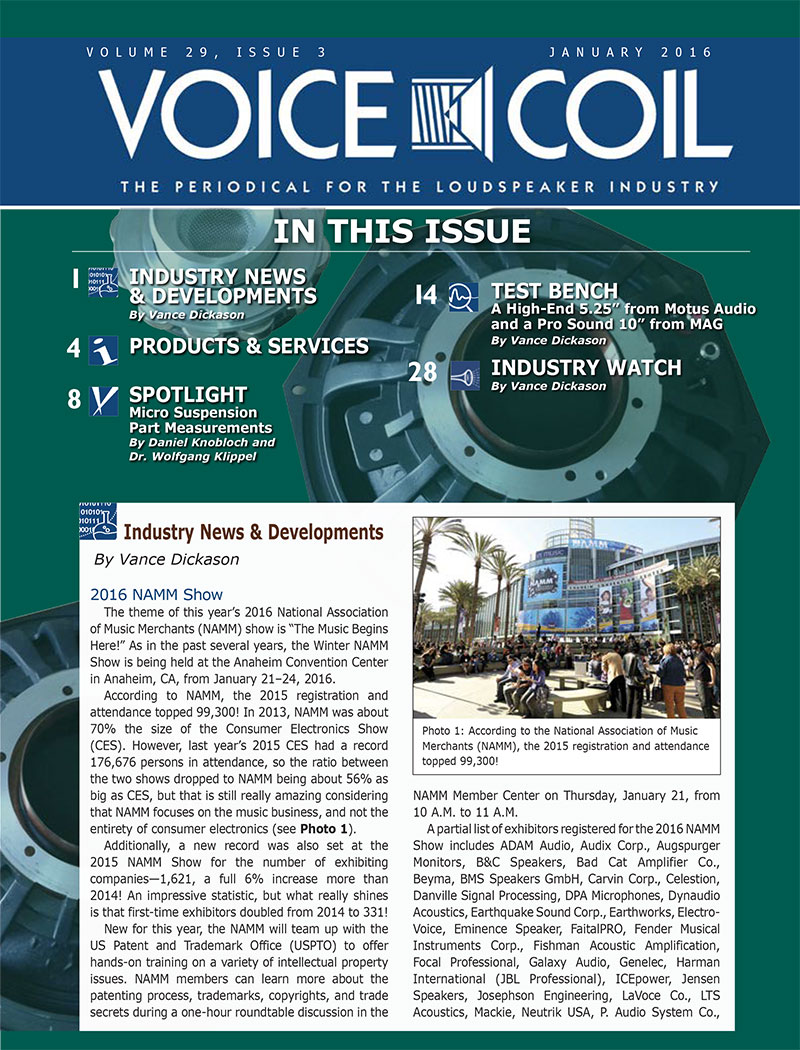 If you are heading for the 2016 NAMM Show in Anaheim, Voice Coil’s first issue of 2016 includes the essential reminders of what should be in every loudspeaker professional’s agenda. The Winter NAMM Show is being held at the Anaheim Convention Center from January 21–24, 2016 and confirmed exhibitors include an impressive display of speaker-related manufacturers.

In Industry News & Developments we also remind our readers about the Integrated Systems Europe (ISE) trade show, being held February 9–12, 2016, in Amsterdam, The Netherlands. ISE is now larger than InfoComm and CEDIA, the two associations behind this European show, and the 2016 edition, expanded to four days, will certainly be another essential moment of the year for the loudspeaker industry.

As for new developments, Vance Dickason highlights a new transducer technology from Christianson Audio, which was recently introduced and has the potential to replace moving-coil driver types in many applications, both in terms of performance and cost. We detail what’s described in the recently granted US Patent 9,124,964 (others pending) and further details of this new technology, which represents a radical improvement of the basic and well-known Air Motion Transformer (AMT) technology, as originally developed by Dr. Oskar Heil and ESS Labs in the 1970s.

In Spotlight, there is another great reference article on “Micro Suspension Part Measurements,” written by Daniel Knobloch and Dr. Wolfgang Klippel, detailing a simple and fast procedure for testing the diaphragm used in microspeakers, headphones, tweeters, and microphones.

January’s Test Bench characterizes a high-end 5.25” mid-bass driver, from high-end home audio OEM manufacturer Motus Audio, and a Pro Sound distributed neodymium magnet motor 10” woofer from MAG, a Ukraine-based pro sound OEM manufacturer. Motus Audio drivers are designed by US transducer engineers and built in China. Voice Coil did its first review of a Motus Audio product, the Motus Audio UH25CTI dome tweeter, in the December 2012 issue, followed by the Motus Audio UH205P1 8” mid-bass driver featured in the November 2015 issue. This month, Motus Audio sent the 5.25” version of its woofer line, the UH130PW1.
The 10N501 from MAG is the second driver analyzed from this interesting Ukrainian company. The first one was the MO610, a 6.5” midrange that appeared in Voice Coil’s November 2013 Test Bench. The 10N501 is a pro sound 10” woofer intended for applications in line arrays or compact two-way monitors and left an excellent impression in terms of overall fit and finish and build quality.

As always, the latest issue of Voice Coil - as well as previous archived editions - is available to read online or download here: www.gotomyvcoil.com
To download the new issue, renew your subscription, or qualify for a free subscription to Voice Coil, just go here: http://audioxpress.com/page/Voice-Coil-Subscriber-Services.html
related items