Tascam, the professional division of TEAC Corporation (now part of Gibson) has updated its DR-60DmkII four-channel recorder for use with DSLR cameras with new microphone preamps with up to 64dB of gain for recording quiet voices on set. Tascam also released its new DR-44WL and the smaller DR-22WL portable recorders with Wi-Fi, for control, transfer and streaming.
The Tascam DR-60DmkII is a portable recorder designed from the ground up to complement DSLR cameras, but also for television production, live events and web broadcast. The design of the DR-60DmkII contains a tripod mounting screw on top and socket hole on the bottom, integrating perfectly with cameras from Canon, Nikon, Sony, and others. The camera output attenuates down to mic level before passing the signal to the camera to prevent distortion. The new version includes an improved microphone preamp for up to 64dB of gain and a smoother sound. 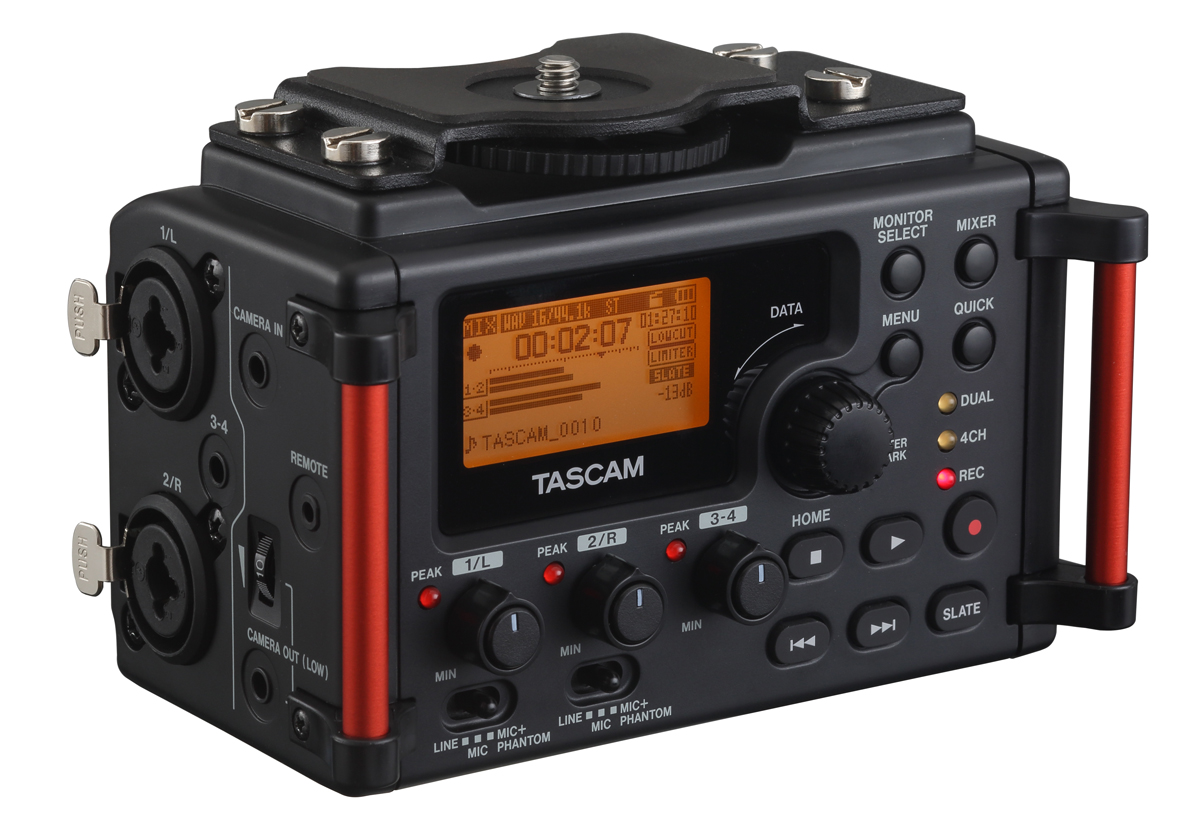 A pair of XLR microphone inputs feed TASCAM’s latest HDDA microphone preamps and provides phantom power for condenser microphones. The preamp gain and other controls are easily accessed from the front panel with physical controls instead of software menus for quick adjustment. A second pair of inputs can be patched to wireless receivers or other sources for four-track recording. These preamps far outshine the camera audio, and individual headphone and line outputs allow an additional feed on-set. 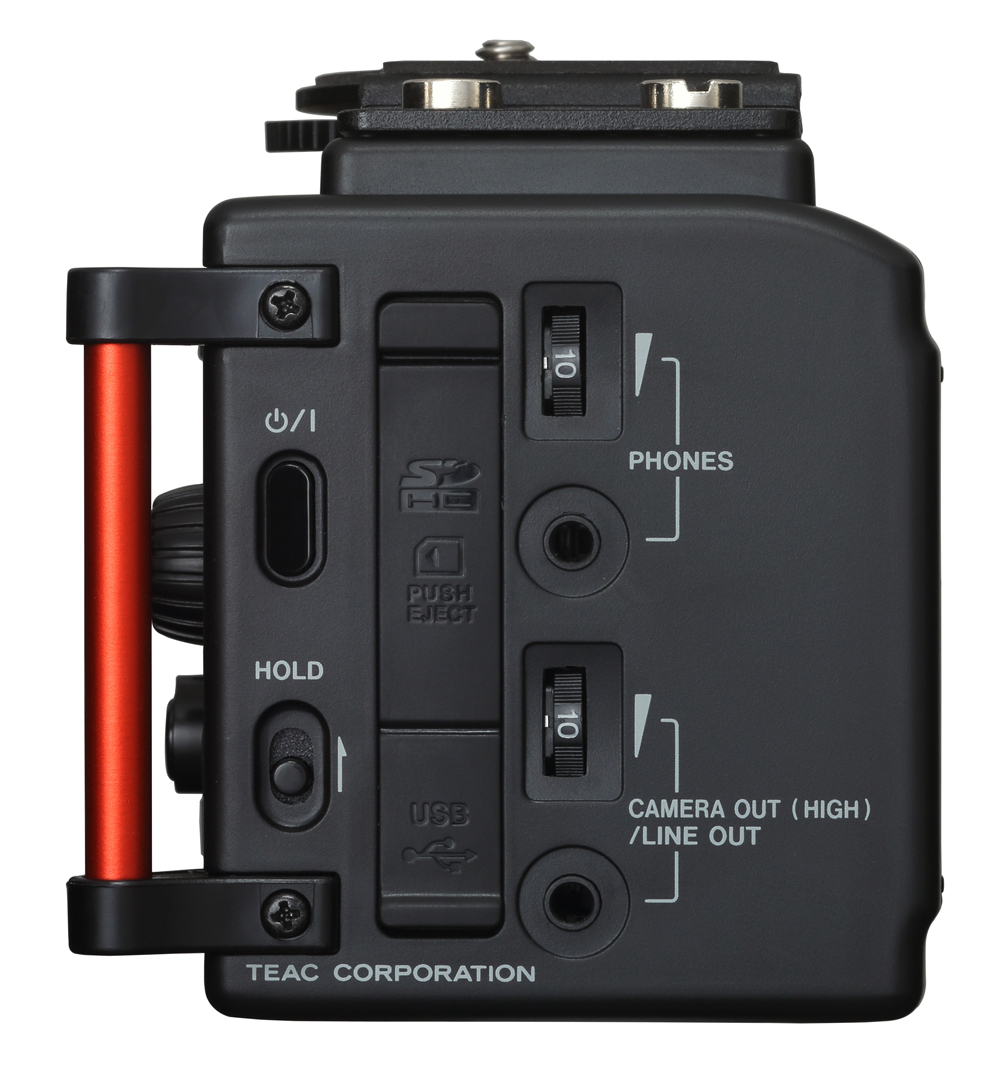 With the DR-60DmkII its possible to record four independent channels or set the unit to Dual Recording mode, which records a safety track at a lower level to prevent distortion. The four channels are recorded to SD cards as WAV or BWAV files, up to 96kHz/24-bit. All the functions and recording modes in the DR-60DmkII are set using witches instead of menus and there are individual headphone and line outputs, as well as two XLR/1/4” combination jacks plus stereo 1/8” mini jack for input. The recorder also features a slate function that plays a tone for easier synchronization with camera audio. Power is provided by standard AA batteries or USB input.

According to Tascam, the DR-60DmkII is shipping and retails for an estimated $199.99

New portable recorders with Wi-Fi
The new Tascam DR-44WL is a 4-track 96kHz/24-bit recorder with integrated Wi-Fi for transport control, file transfer, and audio streaming to smartphones or PC’s, using new built-in stereo condenser microphones with shockmounts in a true XY pattern for perfect stereo imaging. A pair of XLR inputs is also available for 4-track recording, and all four feed an improved microphone preamp and AD/DA stage.

Also available on the DR-44WL is a 4-track multitrack mode, allowing arrangements to be recorded one track at a time with reverb. For video shooters, the recorder includes a hot shoe mount and a stable internal clock to avoid drifting out of sync with your camera. High volume signals, up to 132dB SPL can be recorded as WAV/BWF with simultaneous MP3 recording to SDXC memory cards up to 512GB. 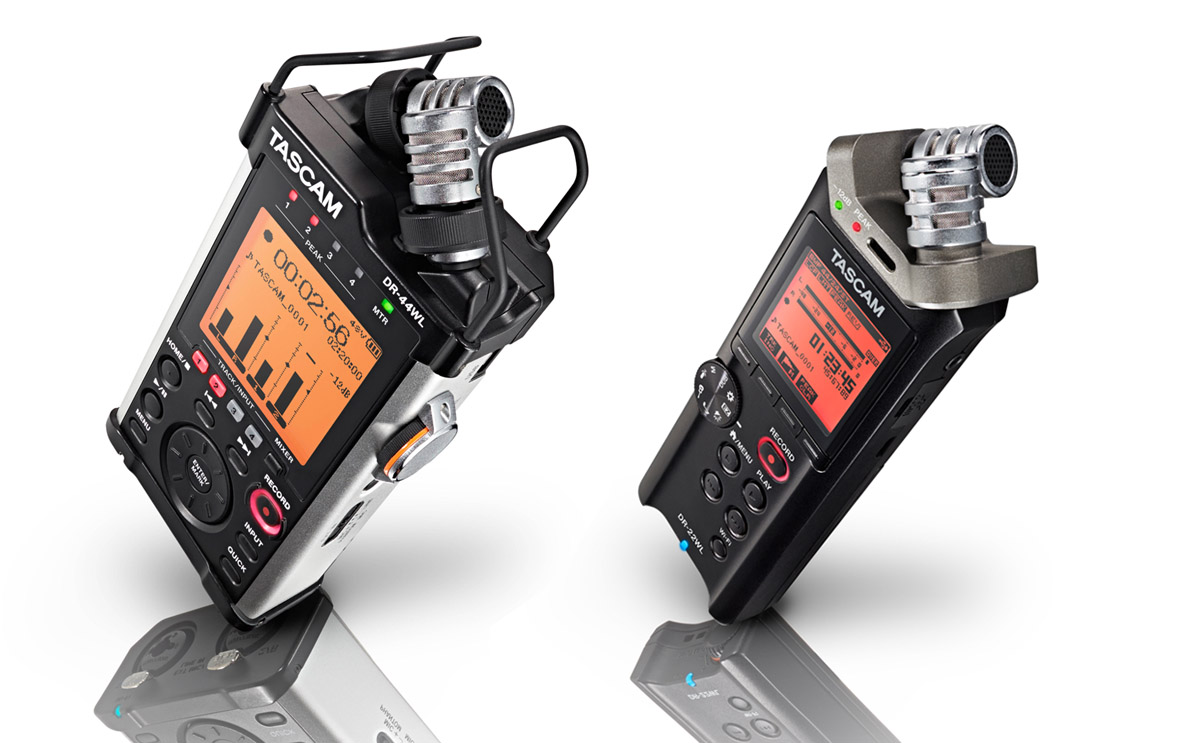 The smaller model is the Tascam DR-22WL also with Wi-Fi for transport control, file transfer, and audio streaming, using a set of stereo condenser microphones in true XY pattern and featuring only an     1/8” stereo mic input with plug-in power. The DR-22WL was designed for easy operation with an eight-position Scene Dial to select basic recording settings for typical situations, or set to full manual for greater control. It’s all recorded through the latest ADDA converters at up to 96kHz/24-bit WAV resolution, on up to 128GB microSDXC cards. The DR-22WL also features Variable Speed Audition to change speed without changing the pitch for transcription or learning new music.

For both models, a free app for iOS and Android devices controls the transport for remote recording start and stop, while audio streaming via Wi-Fi also allows instant sharing and wireless file transfers.
www.tascam.com
related items