Studio Technologies will showcase new Dante-enabled products at Audinate’s 2014 AV Networking World Conference, as well as at InfoComm 2014, including a full range of announcer’s consoles, party-line intercom interfaces, headphone/line output interfaces and analog input interface units.
Studio Technologies is a highly specialized manufacturer of tailored high-performance audio, video and fiber-optic products for the professional audio, installation and broadcast markets. When, in 2013, Studio Technologies announced it licensed and embraced Audinate’s Dante audio-over-Ethernet protocol and was developing a line of Dante-enabled and interoperable products, the market took notice. They certainly helped bring the message that the rising adoption of Audinate’s Dante would also, sooner or later, conquer the competitive and much more “IP-savvy” broadcast and communications market.

Known for it’s motto “designing for the way professionals work,” Studio Technologies was founded in 1978 and gradually became recognized with application-specific solutions like fiber-optic transport, intercom and IFB, announcer consoles, and loudspeaker monitor control systems for broadcast studios, stadiums and corporate environments. The new line of Dante-enabled products would project the company to the forefront of network-interoperable professional audio applications. 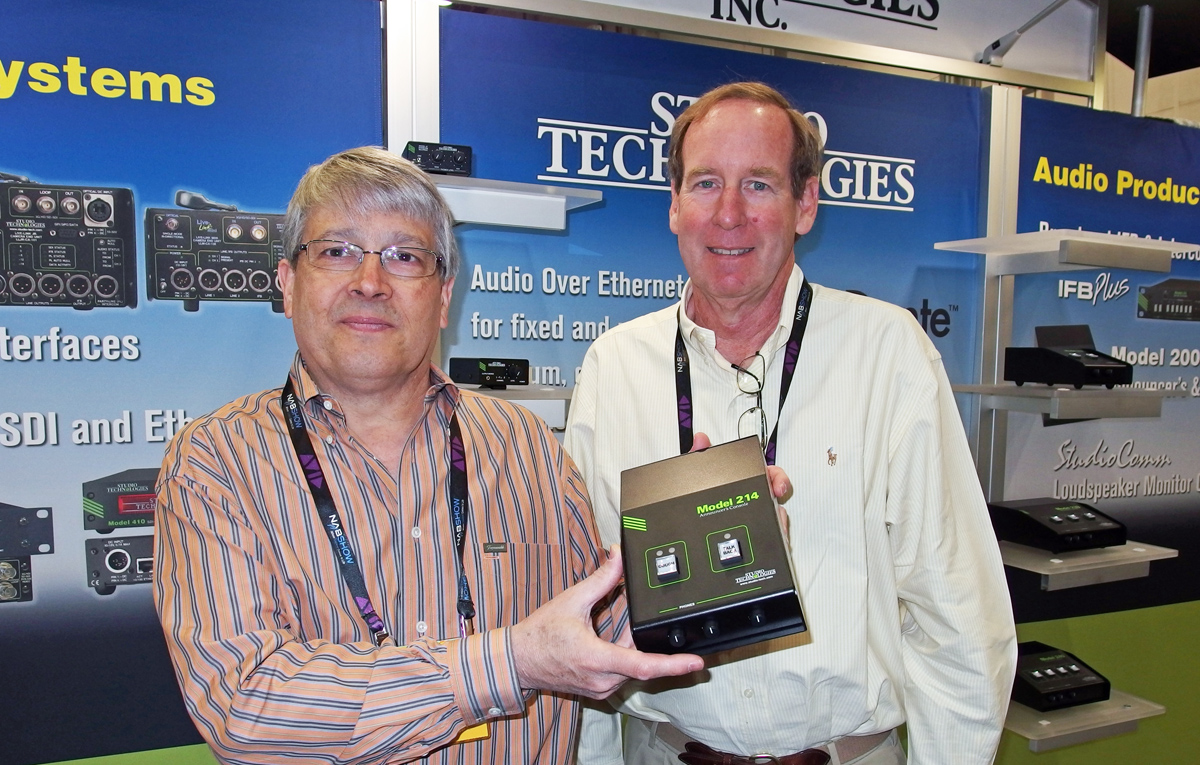 audioXpress met Gordon Kapes, president of Studio Technologies, during the NAB 2014 in Las Vegas, were the company was showing its first Dante implementation, still in prototype: the Model 214 Announcer’s Console. Designed to serve as the audio control center for announcers, commentators, and production personnel, the Model 214 is a basic two pushbutton tabletop switcher to control two audio output channels: one main and one talkback. Using the Dante audio-over-Ethernet networking technology, the console combines all on-air, talkback, and cue audio signal routing in one compact system, responding to multiple applications including on-air television sports broadcasting, stadium announce, and corporate AV.

Gordon Kapes explained how excited he was about the Dante solution and the fact that so many other companies were also licensing Audinate’s technology, including some major names in the audio broadcast industry. The only regret they had at the NAB 2014 was the fact that they only had the Model 214 console to show, even though Studio Technologies had a full line of Dante solutions in the works.

At the InfoComm 2014 show and at the IBC 2014 in Amsterdam, the company will be finally able to unveil the full range of Dante-enabled products, as Gordon Kapes confirmed in a recent announcement. “Our users rely on us to deliver products that will enhance their workflow in both fixed and mobile broadcast applications. Dante has proven its technological excellence, and we are convinced that it is the correct, progressive solution for adding networking technology to our products.”

In the upcoming months, Studio Technologies will be releasing three different models of announcer’s consoles, two party-line intercom interfaces, and two headphone/line output interface and analog input interface units. The company is confident that with its expertise in specialized audio applications, in conjunction with Dante’s advanced network connectivity, will offer customers “the next, progressive audio-over-Ethernet solutions necessary to further enhance and streamline their workflows.”

“Audio-over-Ethernet is not just for the future; it’s ready now for field deployment. It streamlines the setup and teardown process, ensures high-quality audio and provides the flexibility that IP networking offers,” adds Kapes. “These new Dante-enabled products will give our customers the high-quality audio to which they are accustomed to from Studio Technologies, along with the additional flexibility and advanced capabilities that network connectivity provides. We are also going to ensure that these new products stay within our reasonable pricing philosophy and true to our company’s quality standards. Dante is rapidly becoming an integral part of the professional audio world, and we are thrilled to be a part of this revolution.” 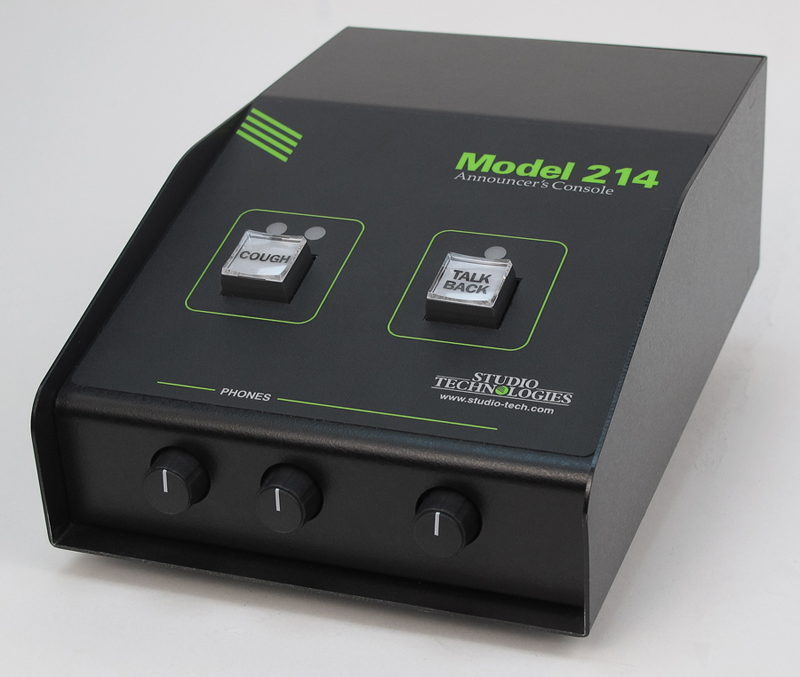 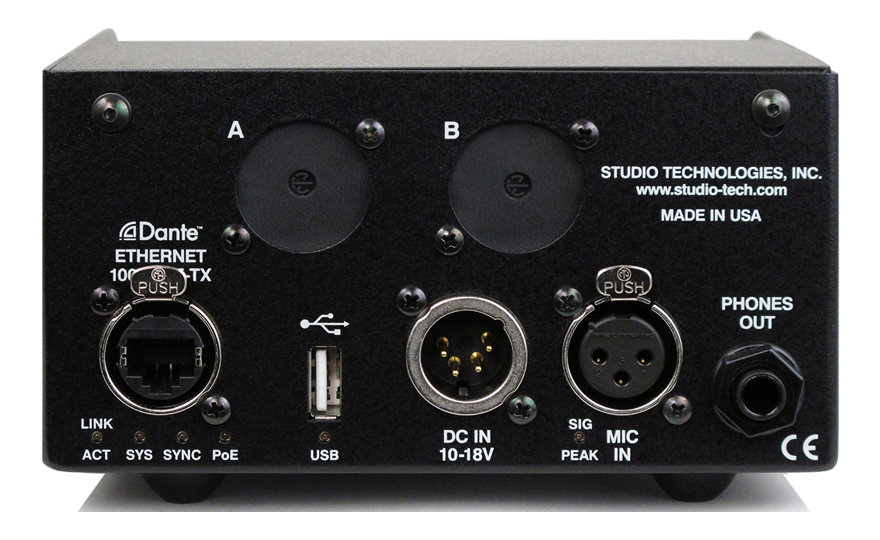 The Model 214 announcer’s console controls two audio output channels, one main and one talkback, while the new Model 215 features three pushbutton switches to control one main channel and two talkback, and the Model 216 controls one main and three talkback channels.

Studio Technologies is also introducing two general-purpose Dante/Analog Audio Interfaces: The Model 5202 with two mono channels and the Model 5204 four-channel (two stereo) version, both with headphone and balanced line-level outputs. The units require only an Ethernet connection to supply both the data interface as well as Power-over-Ethernet (PoE) power.
www.studio-tech.com
related items