Solid State Logic will exhibit at Infocomm for the first time in 2014 and is using the opportunity to showcase its Live Console with V2 software. The new software release introduces 25 significant new features and enhancements and supports a comprehensive Offline Setup application.
Solid State Logic (SSL) announced that it will be exhibiting at InfoComm for the first time in 2014. As part of its continuing expansion into the ProAV market, the company will be presenting the V2 Software for the SSL Live, its first-ever dedicated live sound console. Reception to the console by the live sound production community has been extremely positive since its announcement last year, with Live already appearing on tour with Peter Gabriel, Carlos Santana and Flogging Molly, among others.

The V2 software release introduces 25 significant new features and demonstrates the rapid pace of ongoing development at SSL. Additions include enhancements to the Output Matrix, Effects Rack, User Interface, Routing, Solo System and Focus Channel, as well as the introduction of a comprehensive Offline Setup application. The new software, released in April, is now standard on all new consoles and is available for free to all existing owners. 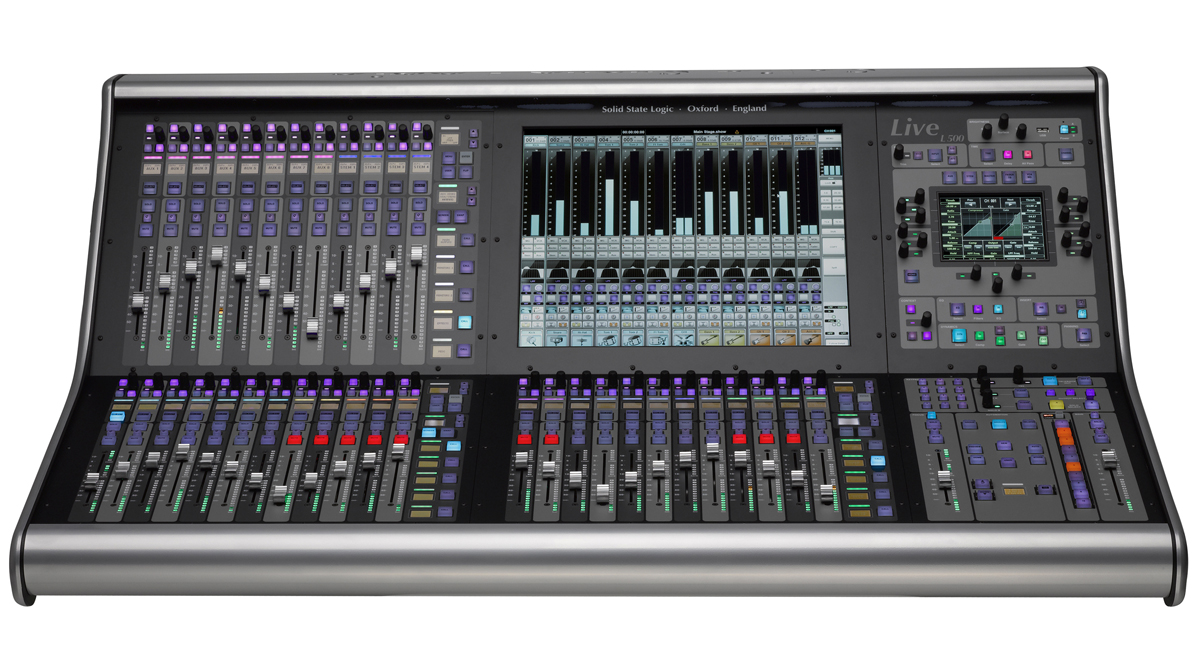 The SSL Live PC Offline Software allows engineers to create, setup and edit all aspects of a Live Showfile from the comfort of their own laptop, making creation or editing of Show and Preset files simple and efficient. The user is presented with the same menus, screens and options as the full console software, creating a familiar user environment, enabling them to configure a Showfile from scratch or load one of the SSL Template files and edit it to their own requirements. All aspects of the Console Configuration can be edited, giving the user full control over the power of the Live’s Tempest processing engine. Full access to stage box setup and routing is provided. Along with naming, coloring and the unique Eyeconix channel identification tools, the layout of Fader Tile layers and banks can also be configured and accessed from the software. As well as control over mix bus routing, pre/post feed point sourcing and all other audio related channel parameters. In addition, the Automation system is fully accessible so that scenes, automation filters and input/output actions can be created, edited and updated. This also includes Group modes, scene re-numbering, etc. Once a Show file has been created or edited, it can be saved and exported to a USB key and then imported into the Live console ready for use.

Matrix Outputs now have EQ, All-pass filters and delay processing available. All 36 Matrix Output paths now have available High and Low Pass Filters, a 4-band parametric equaliser, two seconds of delay and our unique All Pass Filters. This is in addition to the two inserts that can be used with both the internal Effects Rack and external processing. As with all the other path types within the Tempest engine, the processing order can also be changed by the operator to customise the signal flow for their requirements on a Matrix-by-Matrix basis.

The Version 2 release brings a selection of new effects that introduce additional sonic options and ways to maximize the processing power of the Tempest platform. New effects include four EQ types (the super flexible G-Flex EQ; which comes in 8, 16, 24 and 32 filter versions, a new, smooth Contour EQ, 1 and 2 band Dynamic EQ and a 4+2 Band Parametric), four new Delay effects (Tape Echo, Ping Pong, a new Short Delay and new Multi-Tap delays), ‘Guitar Cabinet’ and ‘Bass Cabinet’ emulations and five Reverbs (Ambient, Cathedral, Stadium, Recording Room and Tight ER). These new reverbs increase usability and make reverb setup much easier whilst retaining the supreme audio quality of the ER Verb from Version 1 Live software. A new Phase Scope Tool has also been added.  With All-Pass Filters available on all processed paths, the addition of a Phase Scope to the Effects Rack allows the operator to use them more effectively and speed up their setup. Version 2 also includes a number of enhancements to the SSL Effects Rack itself, to streamline effect browsing, naming and routing.

New Control Surface Functions
A ‘Swap Button’ has been enabled on the console’s Fader Tiles and allows the user to assign any bank of a Fader Tile to the Swap button. Once assigned, the operator uses the Swap function like a ‘Home’ button, letting them jump back to their preferred Fader Bank at any time with one button press. As with the console’s Flip Function, Swap can be used independently per tile or globally if Swap is pressed and held down. With up to 75 banks of faders available, this function adds flexibility and speeds up access no matter how many banks the user has available. A new ‘Focus Channel Lock’ function allows the user to assign a path permanently to the Focus Fader and the Channel Control Tile; perfect for that important channel that you always need to control.