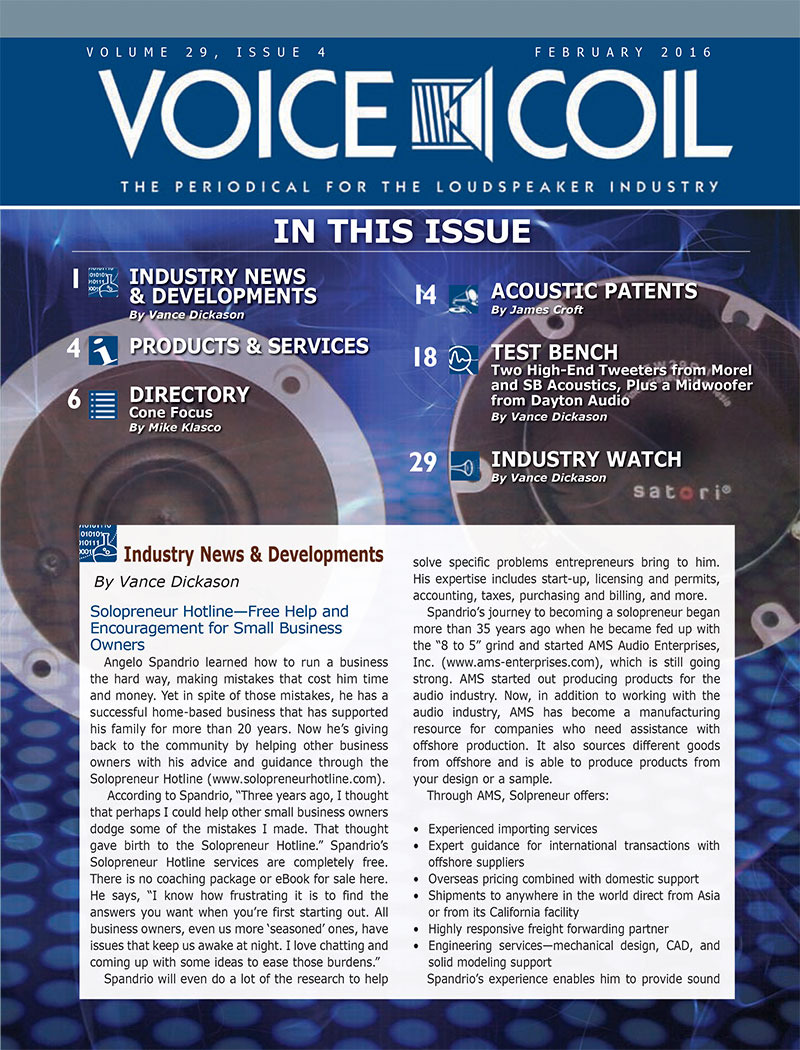 The February 2016 issue of Voice Coil features a complete directory of Loudspeaker Cone Industry Suppliers, edited by Mike Klasco, including many North-American, European, and Asian vendors in this important product segment.

As James comments, this is an updated version of a Dolby foreign patent application “previewed” in Voice Coil in 2015. The US case became available now and Voice Coil provides an extensive and informative review - recommended reading for anyone considering entering this important home-theater market segment.

The February 2016 issue is also strong on driver characterization, since Vance Dickason’s Test Bench reviews two high-end home audio tweeters from Morel and SB Acoustics, plus a midwoofer from Dayton Audio. From Morel, Test Bench analyses its latest addition to the Supreme tweeter line, the Titanium Supreme Coppersleeve Tweeter (TSCT) 1044. As part of the Supreme line, the TSCT 1044 and the similar TSCT 1144 (which is the same tweeter with a larger faceplate) are both an entirely new design for Morel and incorporates the company’s Improved Dispersion Recess (IDR) faceplate design, which is a shaped inset in the round metal faceplate. The shape is intended to increase the high-frequency output in the tweeters off-axis response.

From SB Acoustics’ Satori high-end line of drivers, the column characterizes the Satori TW29RN, a new high-end neodymium 29-mm ring dome. As Vance comments, “it’s worth repeating that all the Sinar Baja transducers are developed by former Danish Vifa/Scan-Speak engineers Ulrik Schmidt and Frank Nielsen, who are co-owners of Danesian Audio.”

As usual, this issue includes a selection of news and notes on Industry News & Developments, as well as the Industry Watch section.

This latest issue of Voice Coil - as well as previous archived editions - is available to read online or download here: www.gotomyvcoil.com
To download the new issue, renew your subscription, or qualify for a free subscription to Voice Coil, just go here: http://audioxpress.com/page/Voice-Coil-Subscriber-Services.html
related items