Here’s a software tool that we think will be quite interesting to most of our readers. Developer Sample Magic has announced a major update to its industry-standard instant referencing Magic AB plug-in. This utility plug-in allows performing instant AB references in a variety of audio formats, including new unique free, latch or synced referencing modes and even saving four cue/loop points per track with zoom.
Sample Magic - a British company specialized in music, loops and sample libraries for music producers - updated its industry-standard instant referencing AB plug-in, an easy-to-use but powerful utility plug-in that allows anyone to switch between their DAW audio stream and up to nine reference tracks in an instant. This is a software already praised by mastering engineers, producers and audio engineers in general, but which feels extremely useful to anyone which needs to do AB comparisons between music sources and audio files. 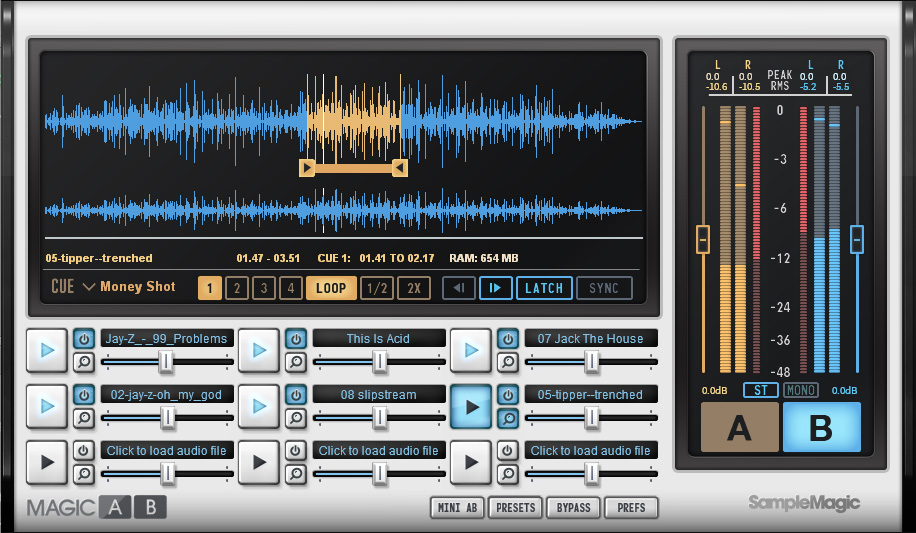 Version 2 takes the elegant simplicity of the original plug-in and offers numerous new features and workflow improvements. To start with, the tool was entirely rebuilt with a new one-click referencing engine that loads all popular and professional audio file formats from WAV and AIFF to mp3 and m4a or AAC on both Mac and PC — no need to convert files first. Secondly, there are new Latch, Sync, and Manual playback modes to suit various workflows (Latch playback to DAW transport; Sync playback to DAW timeline; Manual playback — for freeform referencing). This includes multiple cue and loop points per track and cue point naming as standard.

Magic AB can now be used also for mono-stereo monitoring (check mono compatibility) and there are high-resolution output meters coupled with peak, RMS, and crest monitoring scales. The interface was also redesigned to be even simpler and use less screen space with the Mini AB mode, and includes dozens of user-flow tweaks, including RAM-saving deactivate tracks mode; drag and drop files; more accurate zoom; and an all-new preset system.
This simple, powerful reference tool allows to switch between and audio reference file or something we are working with and up to nine tracks. Magic AB version 2 sits on the mix bus or individual channels, allowing instant switching between a current DAW project and the reference material in transparent quality, regardless of the processes already on the mix bus. If required, plugins can be added post Magic AB to provide a sounding-point for program material with or without additional processing.

The new software also allows to compare multiple sources quickly, creating and saving ‘go-to’ playlists. We can balance the relative volume of tracks or mixes with the extensive meters, while the detailed waveform display provides visual confirmation on the source signals. AB transitions can also be programmed, from instant switch all the way up to 2000ms, allowing our ears plenty of chance to adjust, if that’s what we require.

Magic AB v2 is available for £44.95 ($67.41 or 62.17 Euros) as a special introductory offer price, and there an affordable upgrade for registered users.
www.samplemagic.com/details/184/magic-ab
related items