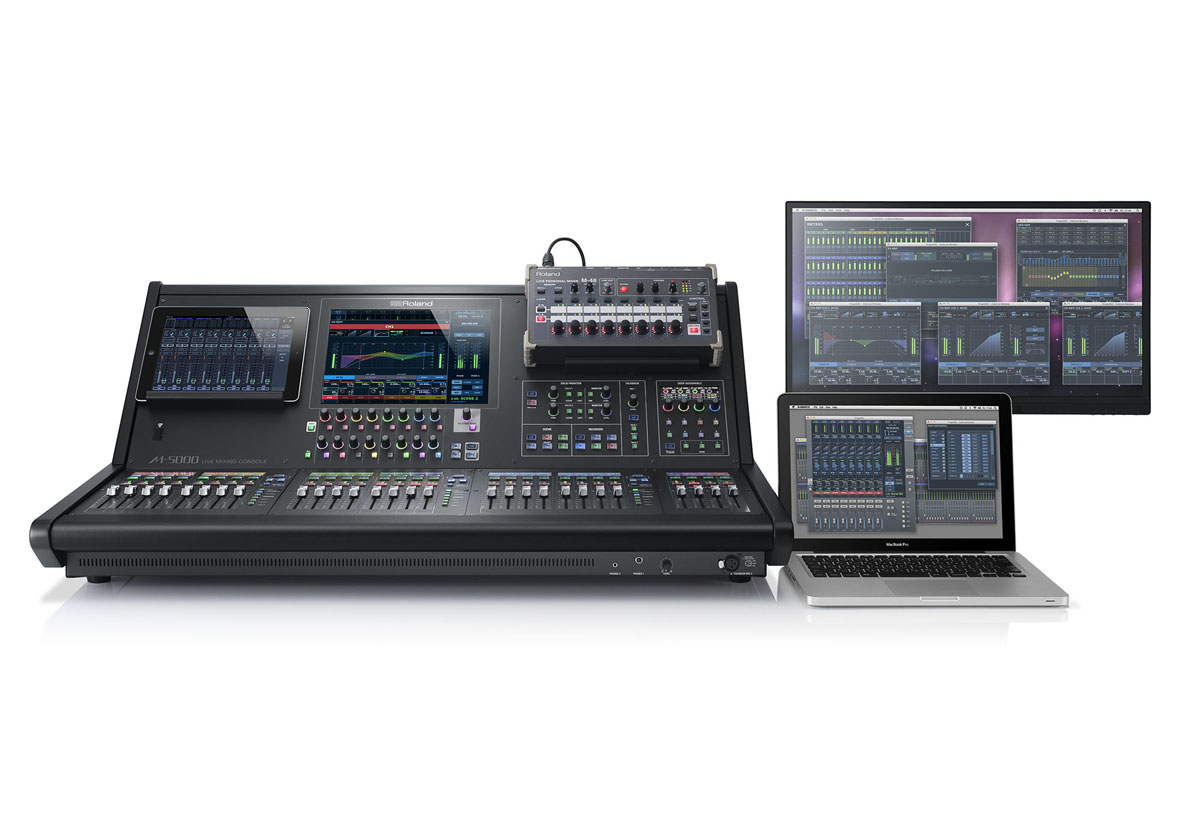 According to Roland, O.H.R.C.A platform conforms to the needs of both the application and the operator by delivering freely definable audio paths, flexible user interface and workflow, expandable protocols, and multi-format I/O choices all delivered at a pristine 96 kHz sound quality.

The Roland M-5000 Live Mixing Console’s internal architecture is not fixed and can be freely defined to allow the operator to essentially “build” a console structure to suit the needs of the application. The free assignable audio paths can be used for mixing channels, AUXs, Matrices, subgroup buses, MIX-MINUS buses, and other input/output configurations within a range of up to 128. O.H.R.C.A enables the console to be flexible enough to accommodate a diverse array of uses. A primary application is for the monitor position where a high number of auxiliary busses are needed. At the same time it is equality at home being defined for a FOH position in touring, live music, theaters, broadcasting and more.

In addition to two REAC ports, the M-5000 has two expansion card slots to support a diverse range of system configurations and audio transport protocols such as Dante, MADI, Waves SoundGrid, more REAC ports, as well as future formats and functions. The back panel includes 16x16 analog I/O, 4x4 AES/EBU, a 16x16 USB audio interface, connection for control via an iPad connected or wireless, and control ports including footswitches, GP I/O, RS-232C and MIDI. All of this capability enables the console to see up to 300 inputs and 296 outputs, all at 96kHz and even more at 48kHz. Furthermore, the patching ability allows and input to be patched directly to one or more outputs without having to use up a mixing channel – ideal for comms, tielines, click track, etc. 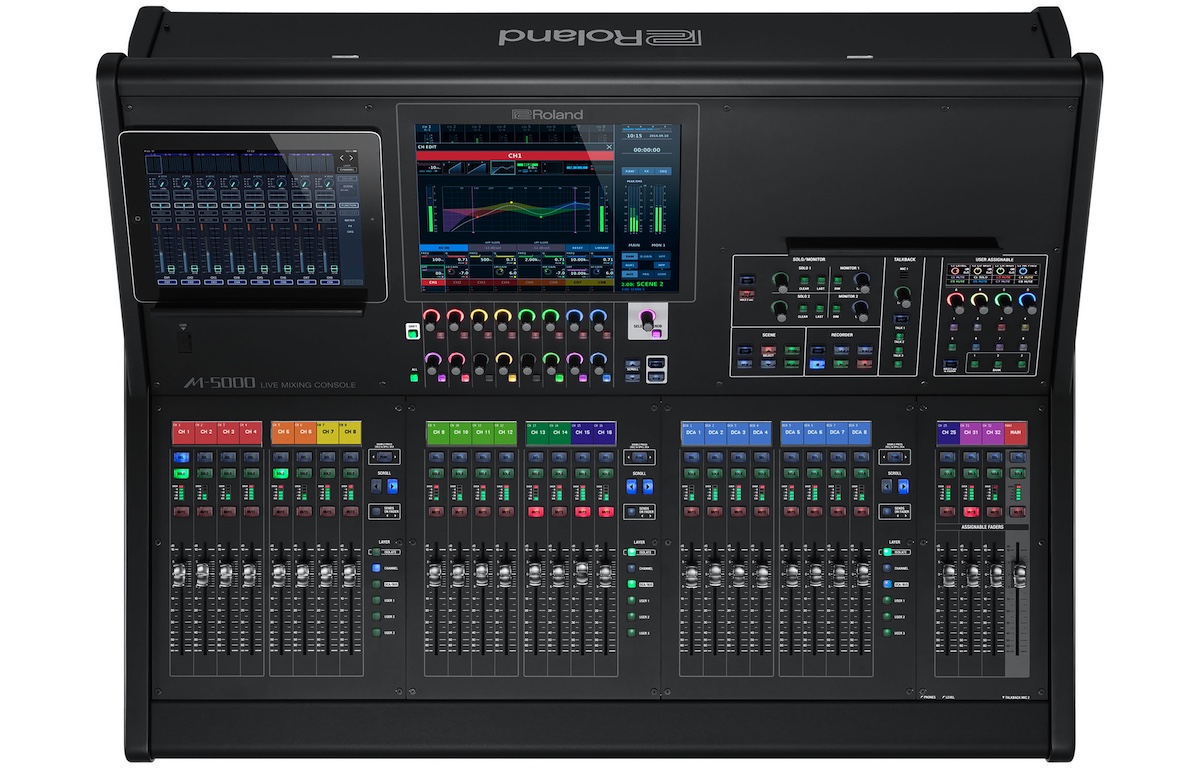 The M-5000 comes with remote control software (Mac/Windows) designed to fully operate the console, which extends the user interface and windows beyond the built-in GUI. The application allows individual windows to be separated out and resized resulting in a completely flexible organization of critical pages or meters on external monitors.

96 kHz audio with exceptional mic pre’s built into the console as well as Roland’s extensive digital snake lineup ensures the highest quality of sound end to end. A single mixing channel can have three assigned inputs: primary, backup for instant swap, and one for playback/record. Each channel also includes 4-band PEQs, two dynamics processors that can be pre or post EQ, delay, and more.

The Roland M-5000 includes 8 stereo multieffect processors with an array of powerful effects including classic vintage Roland effects as well as classic Boss compact pedal effects. 32, 31-band Graphic EQs (or 8-band parametric EQs) can be used simultaneously and are not part of the effects processor allocation. Mains support for 5.1, LCR, LR, plus surround panning and stereo downmix are also available in the mixer configuration.

The extensive family of the Roland Pro Audio products such as digital snakes, personal mixers and recording/playback work seamlessly with the new platform. This allows an M-5000 console to work with any of the thousands of systems already running worldwide. What’s more, the full lineup of peripherals have always supported 24-bit/96kH operation resulting in an instantaneous and automatic doubling of sampling frequency simply by replacing a Roland M-400 or M-480 with a M-5000, for example.

In addition to the many digital snake options available for I/O, integrating an M-48 personal mixing solution is particularly powerful for hybrid monitor positions. A hybrid solution is where the front-line, more mobile talent’s monitor mix is off the console busses in the traditional way, while other musicians such as drummer, keys, orchestra may be on M-48 Personal Mixers.  With the powered REAC port on the M-5000, an M-48 can be placed on the console itself and whenever the monitor engineer selects a musician in the list displayed on the screen, the M-48 will instantly mirror itself to that position. Connecting that M-48’s line outs to one of the monitor busses enables the engineer to flip back and forth between musicians on aux busses and musicians on personal mixers.

The R-1000 48-Channel Player/Recorder rounds out the family of devices that are fully integrated with its ability to playback or record up to 48 channels. When inserted inline between the I/O and console, full control of arming track, routing, starting, stopping – you get playback for soundchecks, training – all the through the identical signal chain as your live sources with no patching required - complete with preamp compensation if you have to change the physical gain.

Roland and Waves
Roland also announced a joint partnership with Waves in the development of a SoundGrid expansion card for the new Roland M-5000 Live Mixing Console.

SoundGrid is a digital Audio-over-Ethernet networking and real-time processing solutions for live, broadcast and music production facilities using SoundGrid technology to deliver uncompressed, multi-channel, low-latency digital audio over Ethernet networks. It provides a low-latency environment for high-precision audio processing. Together with a server, a Mac or PC host computer, SoundGrid and Waves MultiRack enables the user to run, in real time, a multitude of award-winning reverbs, equalizers, compressors, and other tools by Waves, as well as any other SoundGrid-compatible third-party plugins and, enables FOH engineers to record and do virtual sound checks.

SoundGrid audio networking is perfect for logistically complex events such as awards shows, music festivals, sporting events and houses of worship which often require real-time communication between multiple stages, consoles, broadcast vans and studios, as well as processing and recording computers.
“We are very happy to be able to offer our users the power of Waves effects in a live setting,” explains Roland Corporation U.S vice president, John Broadhead. “Waves has a tremendous track record in the studio and we are thrilled that engineers using our new console will be able to use all those same tools live as well as the additional power of SoundGrid networking – an ideal situation.”

Mick Olesh, Waves EVP Sales & Marketing, states: “Waves is pleased that live engineers working on the Roland M-5000 can now utilize Waves MultiRack and the SoundGrid platform, making it easier than ever to bring Waves studio-quality audio processing to the stage.” 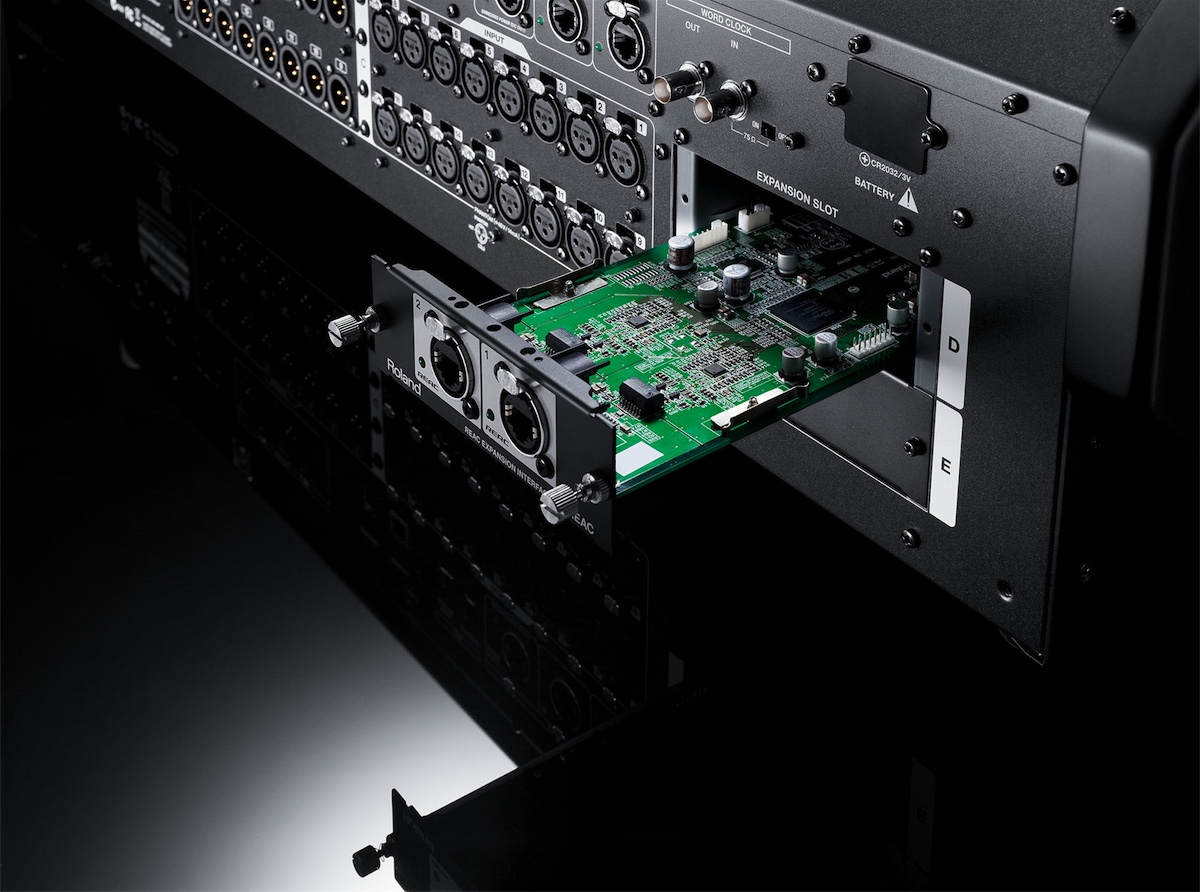 Roland and Audinate
Simultaneously, Roland announced their support for Audinate’s Dante audio networking solution as an optional expansion card in their new M-5000 Live Mixing Console. Supporting Dante in addition to REAC, MADI and Waves SoundGrid positions the new Roland M-5000 Live Mixing Console and the O.H.R.C.A platform as one of the most openly networked audio consoles on the market.

“We are excited to be working together with Audinate in offering Dante connectivity to our users,” explains Roland Corporation U.S vice president, John Broadhead. “The Roland Pro Audio lineup is one of the most comprehensively integrated audio solutions available and with the ability to now integrate with Dante networks, it delivers an enormous amount of power and flexibility to our clients.”

“We have been working closely with Roland for some time now, and the culmination of the new Roland M-5000 Live Mixing Console with Dante networking will be extremely well received in the market” stated Lee Ellison, CEO of Audinate. “Dante offers the most extensive portfolio of networked products in the pro audio market and we are thrilled to welcome Roland into the Dante family.”

The Roland M-5000 Live Mixing Console will be available Q1 2015 with the SoundGrid optional card available in the summer. The Dante Expansion card will be available early 2015.
proAV.roland.com/OHRCA | www.rolandsystemsgroup.com
www.audinate.com | www.waves.com
related items