Radial Engineering is now shipping its new Decoder, a versatile and self contained MS (mid-side) interface, allowing experimenting with this type of techniques in any situation in a simple but complete portable device. It can be used with 3 microphones and connected to line-level to process pre-recorded tracks. 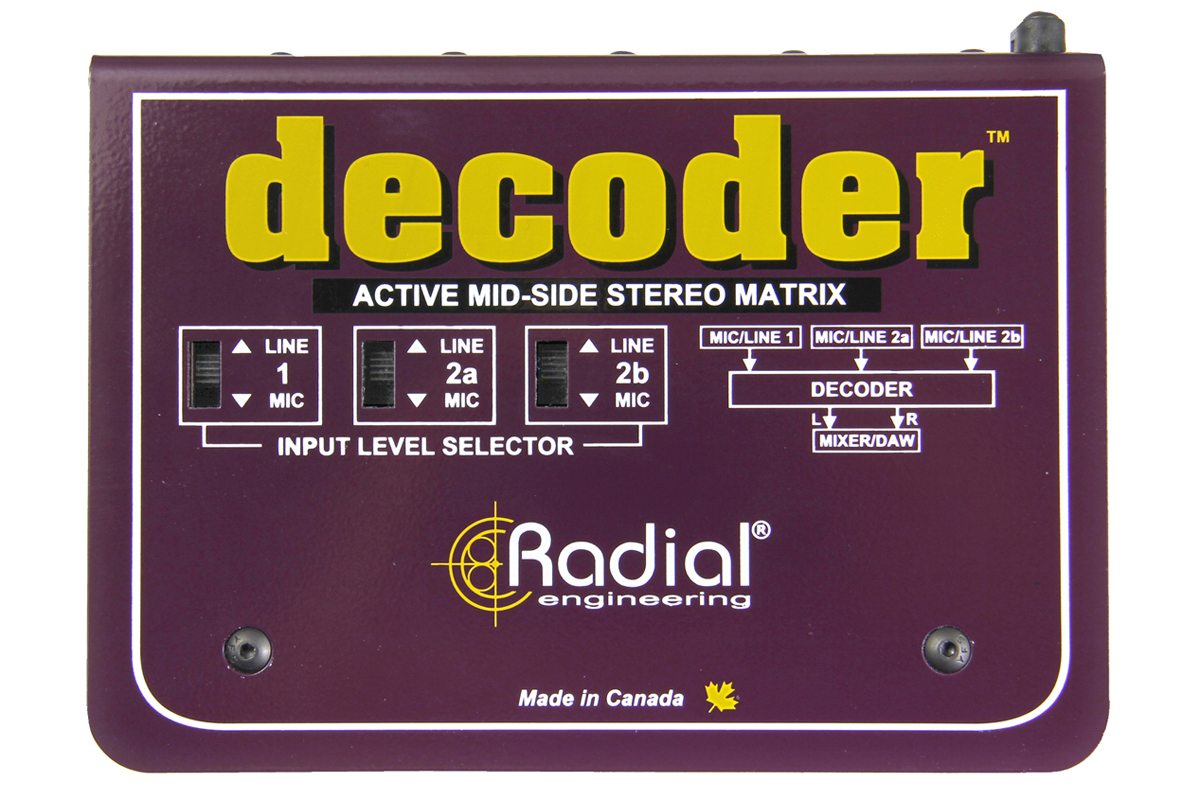 The Radial Decoder is a microphone preamp and mid/side stereo matrix that enables the user to easily create M/S recordings without having to reconfigure a recording console. Featuring built-in mic pre’s with phantom power and independent level control, the Decoder automatically combines the signals to a stereo output using the sum-difference method for spectacular stereo imaging that translates well to mono for broadcast.

The Radial Decoder makes it easy to create exceptional stereo imaging when combining a stereo mic with a second middle microphone. Radial Product Specialist, Ryan Juchnowski explains: “When we started working on the Decoder, we knew full well that a savvy engineer can pull together an MS patch using a traditional console, but we felt that there are a number of users who would prefer to have a simple ‘plug and play’ kit to do the job. Once we got started, we had so much fun during audio tests that we became convinced this would be a real treat to use for those with smaller studios where patching facilities may be limited or for those who plan to Reamp using pre-recorded tracks.”

The Decoder begins with three XLR inputs with input-1 for a center mic, and input-2 (a) for a single output figure-8 mic or 2 (b) for those using two cardioid mics. Individual on-off switches and level controls for all three inputs are conveniently located on the front panel. A recessed 48 V phantom power switch may be activated to supply DC for condenser microphones. 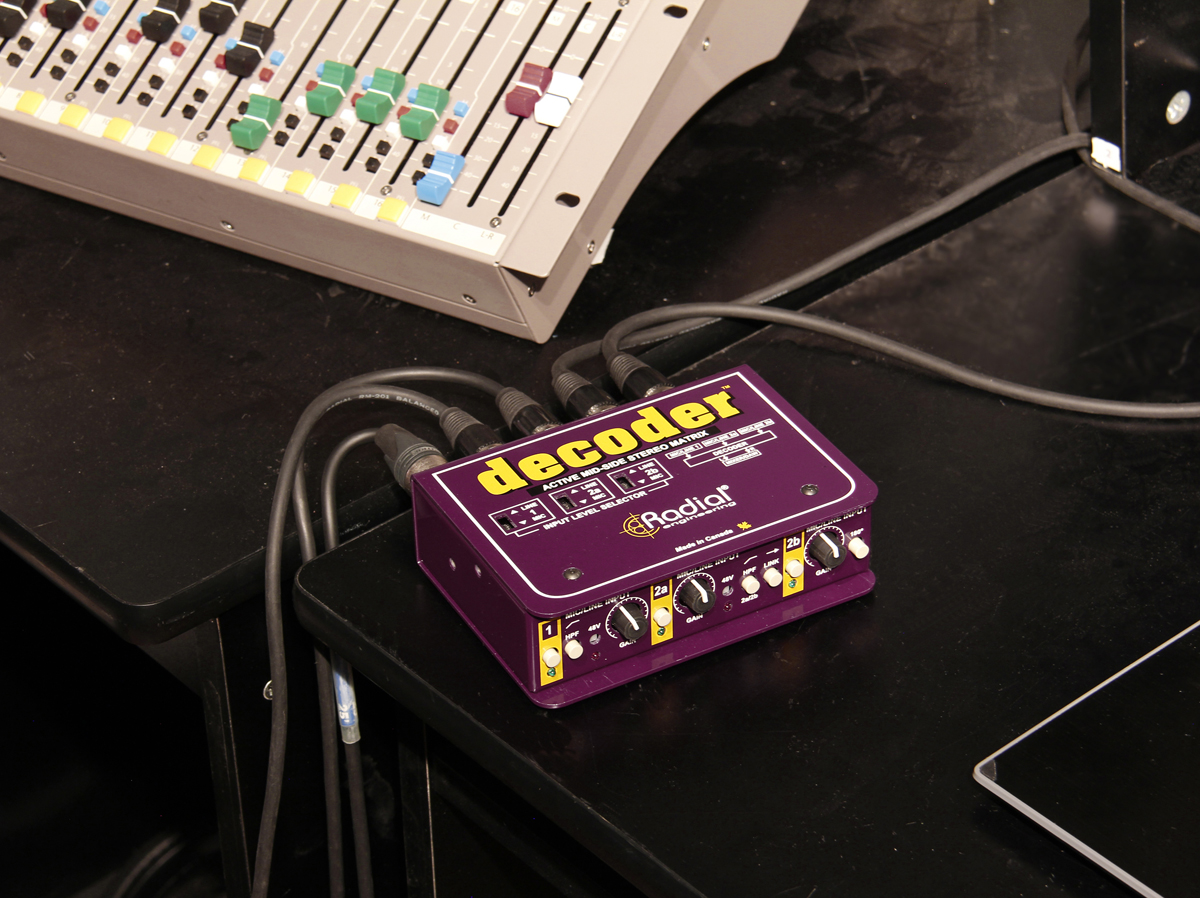 A high-pass filter may also be engaged to eliminate excessive low frequency rumble and improve stereo focus. When using two separate microphones to create a figure 8 pattern, a 180° switch is engaged to reverse the polarity of mic 2B. Top mounted selector switches enable the Decoder to be used with microphones or line level sources when applying MS imaging to pre-recorded tracks.

The decoder can be used in traditional M/S recording using a cardioid microphone as a mid mic, and a figure-8 mic positioned at 90° from the source to capture the side image, but also using three cardioid mics with the Decoder’s three preamps to create unique M/S imaging. Spacing the mics apart can offer wide ranging effects. 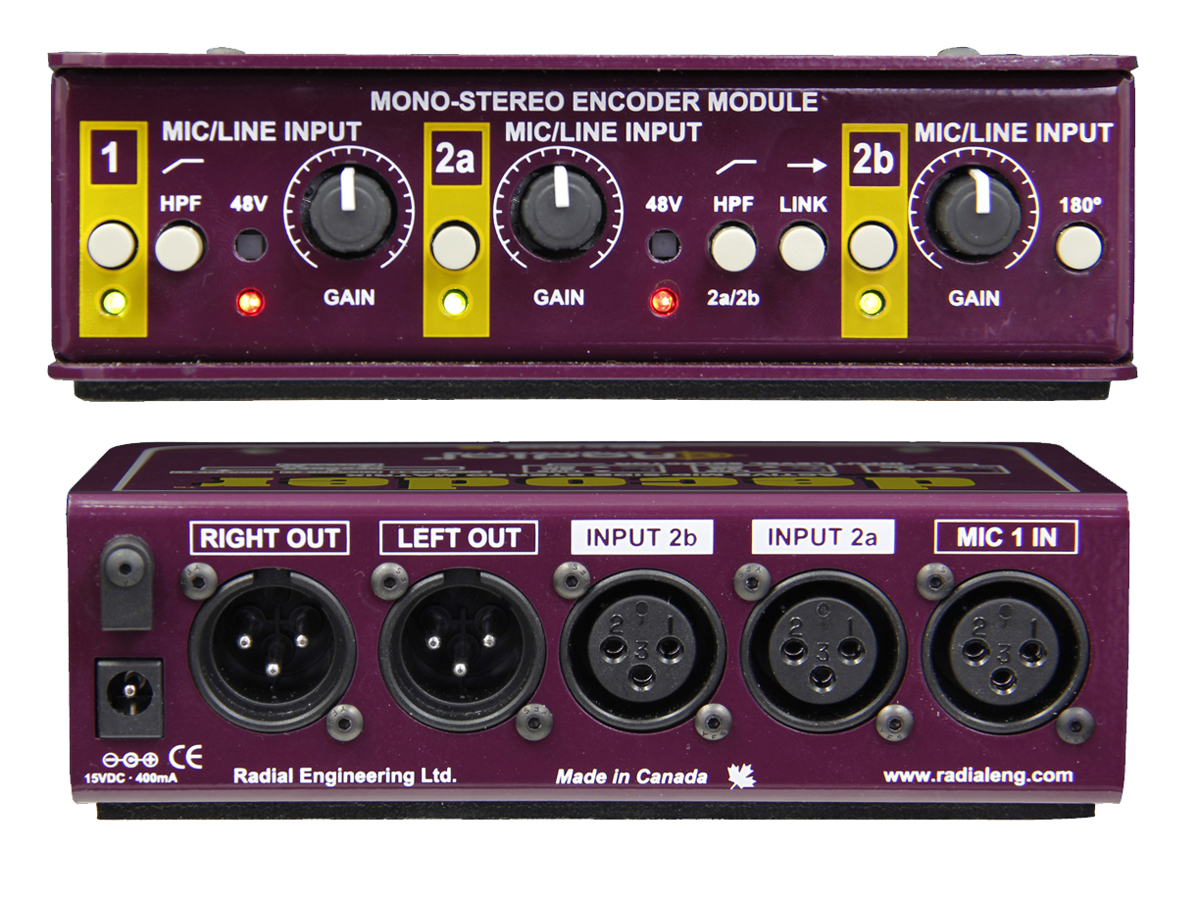 As with all Radial products, the Decoder is made from 14 gauge steel to handle the abuse of being on the road.  A unique book-end design creates a protective zone around the front panel switches and potentiometers keeping them safe from overzealous roadies. The internal I-beam construction is tremendously rigid to assure the sensitive internal PC board will not torque - thus preventing premature development of cold solder joints.

The Decoder may also be rack mounted by using the optional Radial SA rack-mount kit. MAP for the Decoder is $349.99.
www.radialeng.com/decoder.php
related items