Phasx Technologies introduced its new digital audio production systems PX 300 and PX 600 at the Summer NAMM in Nashville. Eight years in development, Phasx promises a brand new digital audio monitoring concept for mastering and production, combining a dedicated hardware DSP monitoring controller with monitors designed to fit comfortably on the desktop around computer workstations.
Phasx Technologies chose the Summer NAMM 2014 show for the unveiling of its new digital audio production systems, the PX 300 and the PX 600, which are purposely designed for up-and-coming musicians, producers, and DJs on the move.

The integrated Phasx PX 300 and the PX 600 desktop audio production systems are intended to deliver high-end studio tracking and mastering performance in a compact affordable package, designed to fit comfortably on the desktop. Utilizing Phasx’s reflection-free speaker unique design and technology, the company says users will be able to master audio mixes from their desktops, solving many of the common problems associated with conventional near field monitors used in less than ideal environments.

Avoiding the near-field reflections that bounce off the desk in front of monitors, creating comb filter distortion effects, and competing with direct sound from the speakers, Phasx’ Shadocaster technology uses a simple “shelf” under each of the desktop drivers to deflect reflections and associated delay/comb filtering effects. According to Phasx, frequency response anomalies are typically reduced by more than 25 dB and speaker performance is dramatically enhanced by Shadocaster at the listening position and the desktop reflection is attenuated by more than 20 dB. 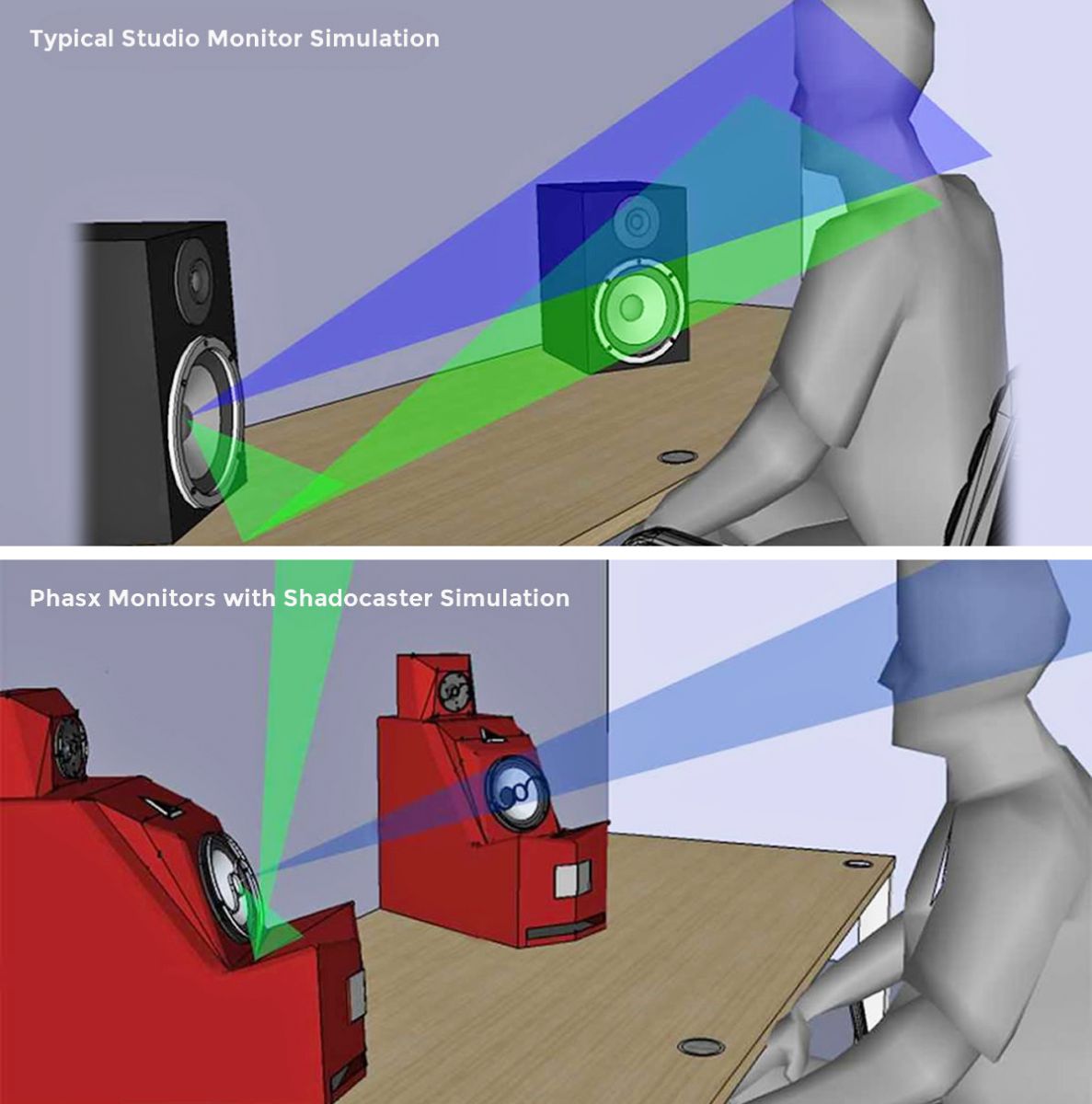 Another way the Phasx PX300 and the PX600 monitors achieve a consistent listening position relative to the monitors is through the use of the patented Acoustic Pinpoint positioning system—which is basically a “gun sight” mounted in alignment with the driver. Just by looking through the sight until the midrange driver is centered in the inner circle and the dust cap fills the inner circle, the user can position his or her ears precisely in relation to the speaker time after time. The larger PX600 monitors have Acoustic Pinpoints on midrange drivers and tweeters to match its larger physical acoustic design.

Psycho-Acoustic Spectral Compensation (PASC) is another way Phasx tried to approach loudness perception and its probably a more contentious approach. We know human ears (more specifically our brains) hear less bass frequencies (as a percentage of the total) at low sound pressure levels (SPLs) than at high SPLs. PASC modifies the incoming audio signal 48,000 times per second boosting the bass levels when needed and balancing the reproduced entire audible sound range at any lower volume level. Phasx says it took a massive technology development to make it happen. Instead of adjusting low and very high frequencies based on the position of the volume control or using RMS detectors to set levels, Phasx’s PASC technology uses a powerful software algorithm that takes our input about how loud something will be played in performance—say at 105 dB in a dance club— and plays it back over the Phasx PX300 or the PX600 with a 100-dB frequency balance at a more comfortable volume level of say 80 to 85 dB, even to frequencies as low as 25 Hz.

Phasx systems combine the fully DSP controlled active monitors, with a purposely designed Monitor Control System with an integrated high-resolution low-jitter digital audio USB sound card. Using only digital connections from the source to the monitors, Phasx promises studio-level mastering all done from the desktop, working with today’s top DAW products—any PC or Mac—enabling users to mix tracks to match any of today’s consumer playback devices. “No one has ever built a monitoring system this advanced for mass production,” claims the company. 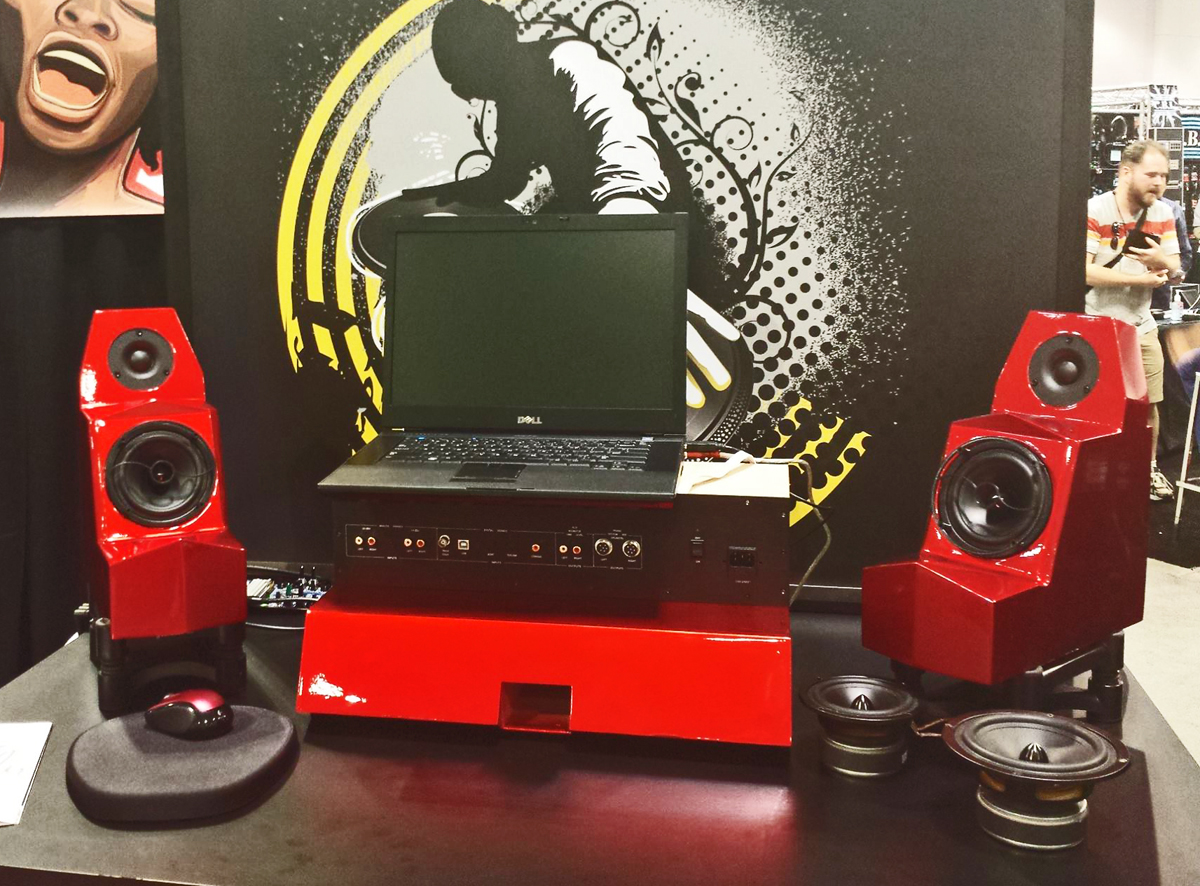 All pictures courtesy of Phasx Technologies

No doubt, this an interesting concept which audioXpress will look forward to testing. Phasx Technologies is currently shipping the first PX600 demo units to dealers, while still working on the smaller PX300 model. The company is also developing a dedicated desktop subwoofer unit—Tunder Under—which was displayed at the Summer NAMM Show 2014.
phasx.com
related items