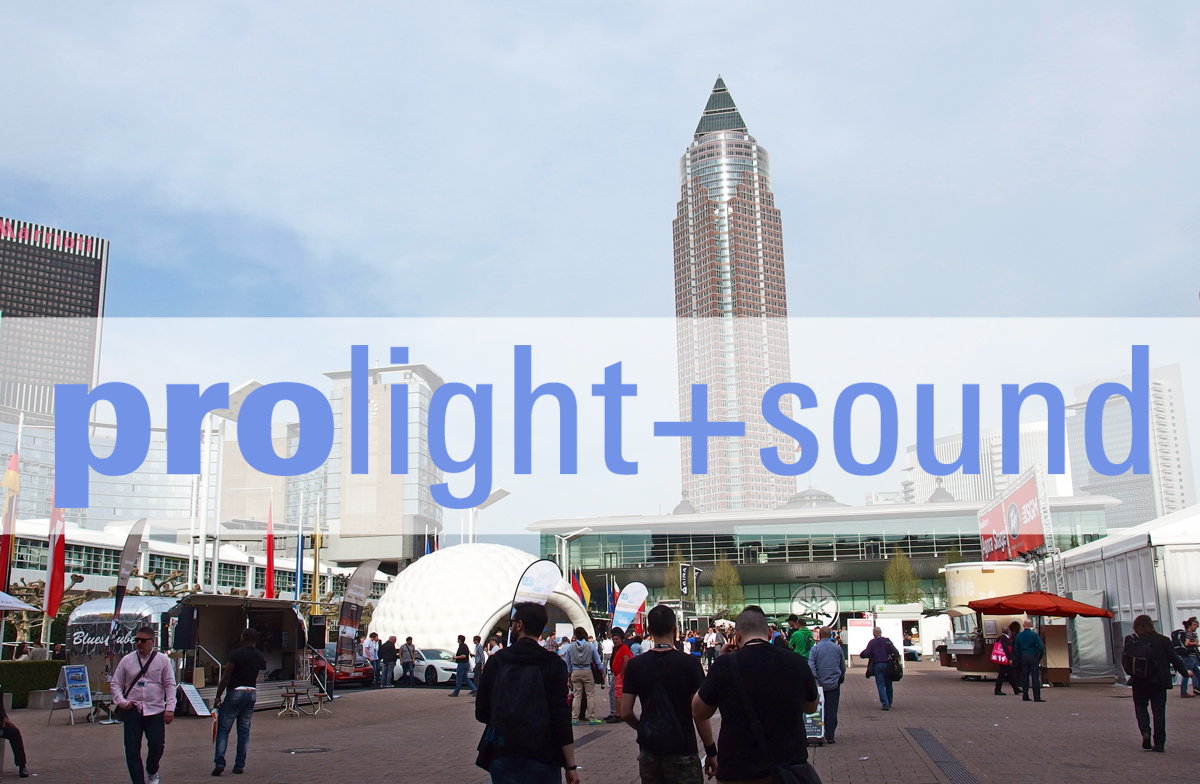 The changes to be implemented in the next Prolight+Sound seem to be generating more consensus than the planned changes in the musical instrument side of the Musikmesse, where there will be effectively a show open to the public running concurrent to a trade-oriented section of the show, as audioXpress previously revealed.

With the extra halls and more focused distribution of the exhibits, Frankfurt Messe also states that “the process of growth over recent years will continue.” This is also reflected by the further development of the concept of the fair. One of the main changes next year will be the move to the eastern section of Messe Frankfurt, which will provide room to expand the fair both horizontally and vertically. Additionally, Prolight+Sound will be held on four weekdays in future (Tuesday to Friday) and thus emphasize its stature as an event for trade visitors.

The new hours of opening, from 10.00 hrs, also take account of the expectations and wishes of both exhibitors and visitors. Prolight+Sound Director Michael Biwer sees the large number of registrations already received as confirmation of this: “The high level of exhibitor interest shows clearly that the new concept is on the right track to make Prolight+Sound an even more successful business platform and source of impulses for the sector in the future. At the same time, it is evidence of the long-standing trust that exhibitors place in us as the organizers.” 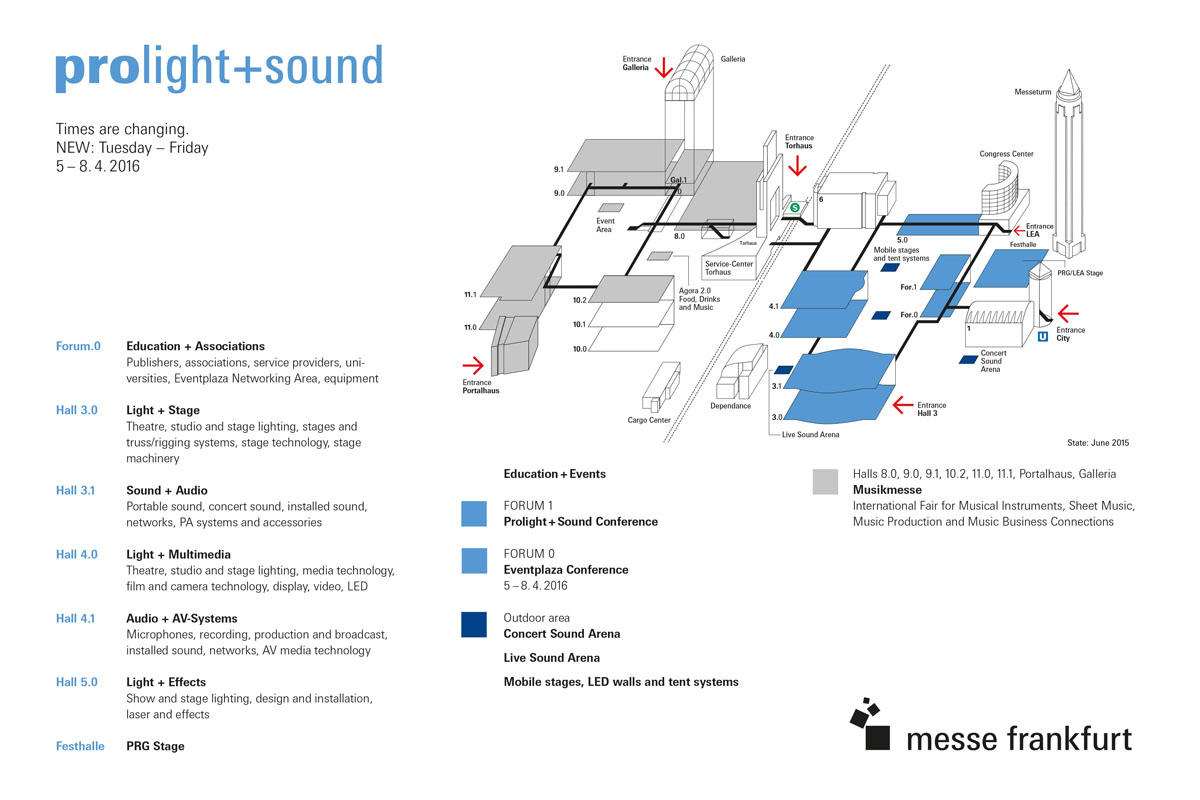 New hall layout
The planning work for the new concept is already in full swing and additional details are being announced continually. Thus, the organizers have already provided detailed information about the new hall layout. Within the framework of the shift from the western to the eastern section of the Exhibition Centre in 2016, the theatre, studio and stage lighting, stages, trusses, stage technology and machinery segments will move to Hall 3.0 (Light + Stage). Hall 3.1 (Sound + Audio) will present products revolving around Portable Sound, Concert Sound, Installed Sound, networks, mobile PA systems and accessories.

The seminars of the Prolight+Sound Conference and Eventplaza Conference are moving to Forum.0 and Forum.1 where renowned speakers will pass on valuable practical knowledge for the sector. Also in Forum.0 is the Education + Associations area with presentations by, inter alia, trade associations, publishing companies, service providers and universities.

Positive echo from the new concept
Following the announcement of the new concept, many important trade associations from the event sector promised their support with regard to its implementation: “The new location will enable exhibitors to develop their potential to the full. It also means more room for informal meetings, dialogs and outstanding conferences”, said Sacha Ritter, Head of the Finances & Operative Business Division of the Germany Association for Media and Event Technology (Verband für Medien- und Veranstaltungstechnik – VPLT).

The concept was also given a warm welcome by Joachim König, President of the European Association of Event Centres (Europäischer Verband der Veranstaltungs-Centren - EVVC): “From our point of view, the changes and developments regarding the sequence of days and the layout of the fair planned for next year represent a good opportunity to further boost the positive trends of recent years.”

Words of praise come also from many companies in the sector: “For us, Prolight+Sound is an important factor in our business year and we are pleased with the ‘fresh breeze’ that is set to blow through the fair thanks to the various innovations”, says Phillipp Wrede, Marketing Manager of db Technologies. 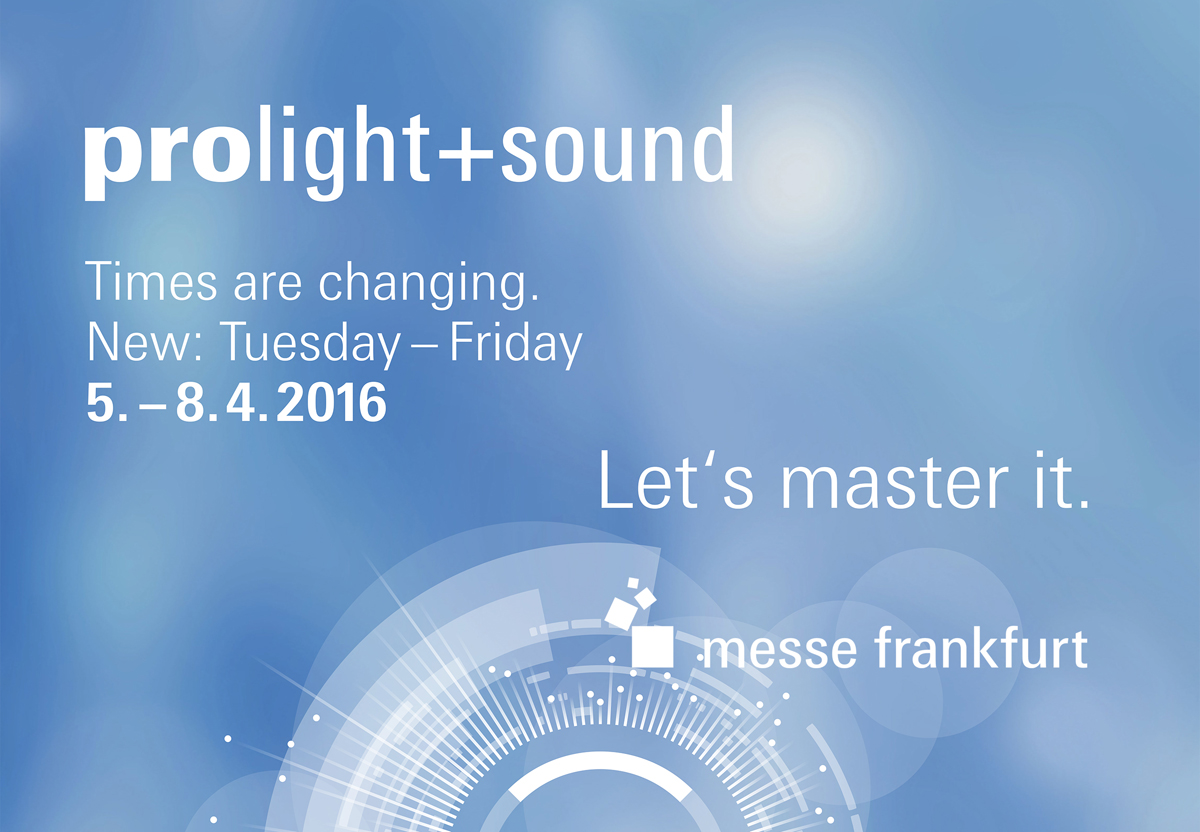 Particularly popular among many exhibitors is the new sequence of days: “From our point of view, this is the right decision because we have always done most of our business on work days when the majority of visitors from the lighting and stage segments are at the fair”, said Luca Galante, Technical Manager of Alfa System. The reaction to the later opening time in the morning has also been well received. As Sandrine Pignon, Marketing Coordinator of L’Acoustics, explains: “In our experience, our exhibition stand is always particularly full during the later hours of the day. Moreover, the new hours of opening will make it easier for us to take part in business dinners in the later evening”.

Despite all the positive indications, an intensive dialog with the sector continues to hold top priority for the organizers: “We are delighted with the numerous reactions and suggestions for implementing the new concept – as well as with the constructive criticism made, which enables us to get into contact with exactly these companies and clear up any remaining misunderstandings and uncertainties”, says Prolight+Sound Director Michael Biwer.

“After all, it is clear that, especially in the case of a fair with very good satisfaction ratings, our job is to actively convince exhibitors and visitors that the changes are for the better. And we are making very good progress in this direction, as shown by the ever better atmosphere and the very large proportion of existing exhibitors signing up again.”

Companies and organizations can benefit from lower early-booking rates by declaring their Intention to Exhibit by July 31 2015.
ww.messefrankfurt.com
www.musikmesse.com | www.prolight-sound.com
related items