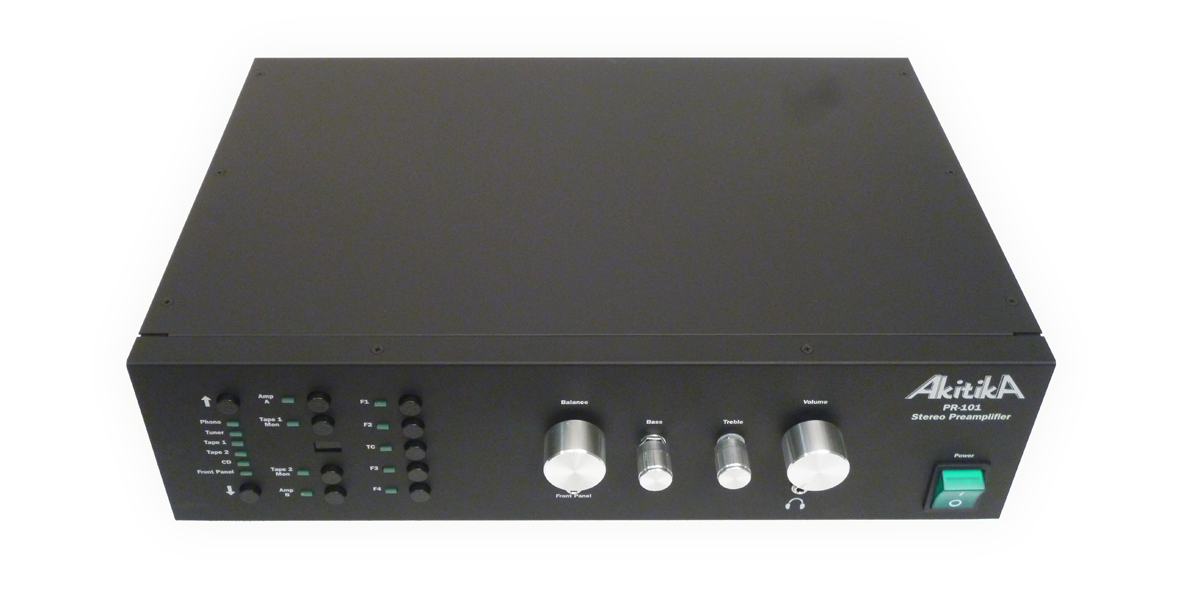 Akitika, LLC was created in 2010 and began with the Updatemydynaco line of enhancement kits for Dynaco solid-state equipment that made Dynaco’s Stereo 120 and PAT-4 sound better than new. More recently, Akitika introduced the GT-101, a Complete Stereo Amplifier kit that puts out more than 50 W per channel into 8 Ω, and nearly twice that into 4 Ω. Akitika believes offering audio kits at affordable prices is a great to “offer everyone the opportunity to understand the magic behind the music.”

The Akitika PR-101 Stereo Preamplifier Kit basic kit comes with a remote control for input selection, volume, balance, and tone-control bypass that allows the user to optimize the sound without leaving their favorite listening seat. It handles six inputs, including two tape recorders, which accommodates some of the most complex home stereo systems. In addition, it has outputs to drive two independent amplifiers, making it simpler to set up biamped or multi-room speaker systems.

When asked about the sound that one could expect from this kit, Dan Joffe, the manager of Akitika, LLC, says, “We’ve worked very hard to use the best design and highest quality components possible consistent with a very affordable price point. The kit builders help themselves tremendously in this regard by the very enjoyable sweat equity they add to make the finished product.”

The uniqueness of the preamp platform is that kit builders can extend the preamp with electronics of their own design. Additionally, Akitika is developing option cards that include a phono preamp and a headphone amplifier. The preamp has a regulated ±12  V and +5 V power supply that can power option cards as well as the standard electronics that come with the preamp. Spare function controls on the front panel and the remote control accommodate future enhancements and additions.

Akitika is accepting orders now for February 2015 delivery of the kit. It’s compatible with both 120 V and 240 V powering, so it can be used around the world.
www.akitika.com
related items