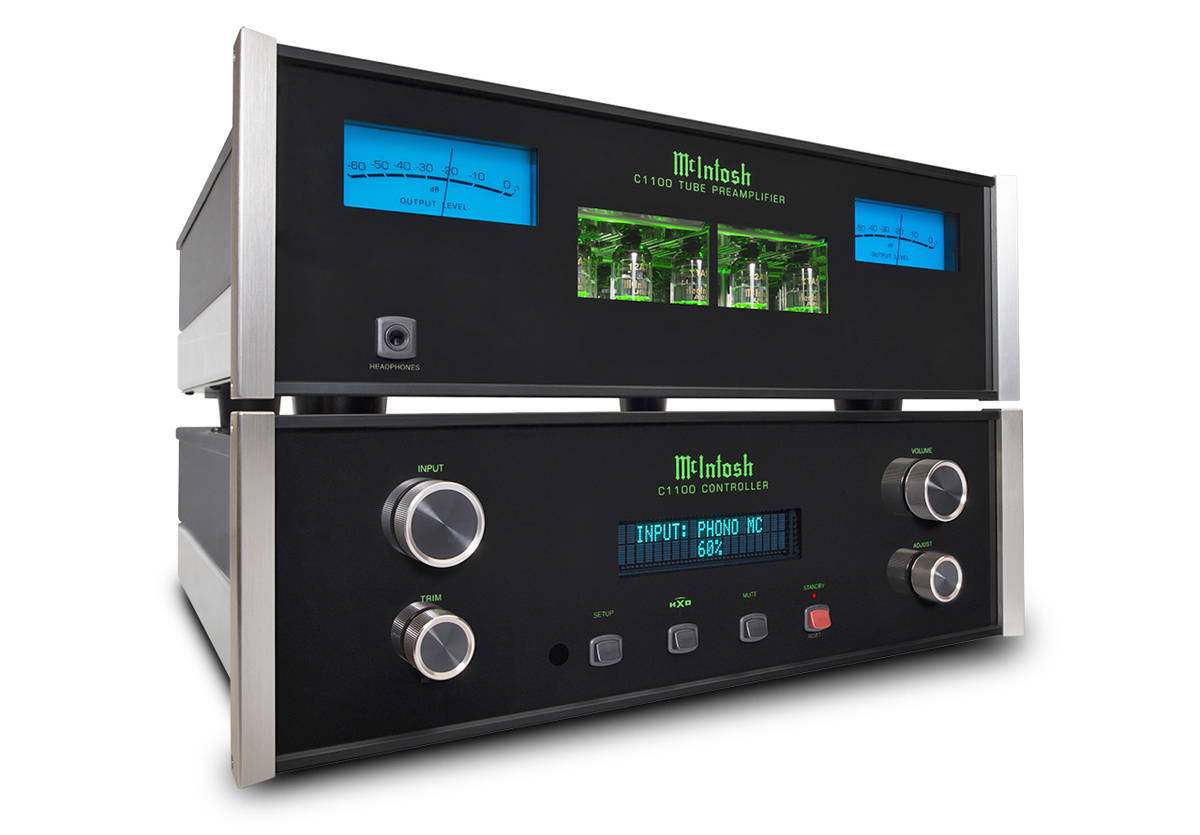 The new McIntosh C1100, comprised of the C1100 controller and the C1100 tube preamplifier, brings a new level of performance and luxury to McIntosh’s preamplifier offerings – evidenced by its high level inputs, which the company says have the lowest noise of any McIntosh preamplifier ever produced. It utilizes a two-chassis design where the control and power sections are completely separate from the audio section.

Absolute isolation of a preamplifier’s two main functions – control and sound – is achieved by this unusual but effective design, in a effort to provide the purest sound reproduction possible. Inside each, the left and right channels are electrically and mechanically isolated from each other to allow true dual mono operation - resulting in the ultimate stereo separation and sonic purity. The two units are connected together via a pair of specially designed, high performance umbilical cables that are shielded to prevent outside noise from leaking into the audio signal. While they are two separate units, when connected they act as one and are easy to control and operate from the included remote control or the C1100 controller front panel. Both units’ chassis are comprised of polished stainless steel and hairline brushed black Titanium stainless steel.

All power control, data ports and external control connections are located in the C1100 controller; the introduction of a dual microprocessor allows for an improved robustness of the control system. The C1100 vacuum tube preamplifier houses the audio connections and circuitry, featuring a total of 12 analog inputs: 6 balanced, 4 unbalanced, plus an adjustable loading Moving Magnet and a Moving Coil phono input. For outputs, 2 sets of balanced and 2 sets of unbalanced connections provide flexibility in connecting to the amplifier.

Twelve vacuum tubes (6 each of 12AX7a and 12AT7) power the tube preamplifier. Compared to the C1000 preamplifier which had 8 tubes, the additional 4 tubes in the C1100 lowers its dependency on any solid-state support. The amplifier circuit has much higher common mode rejection, so any noise introduced by interconnect cables is significantly reduced. 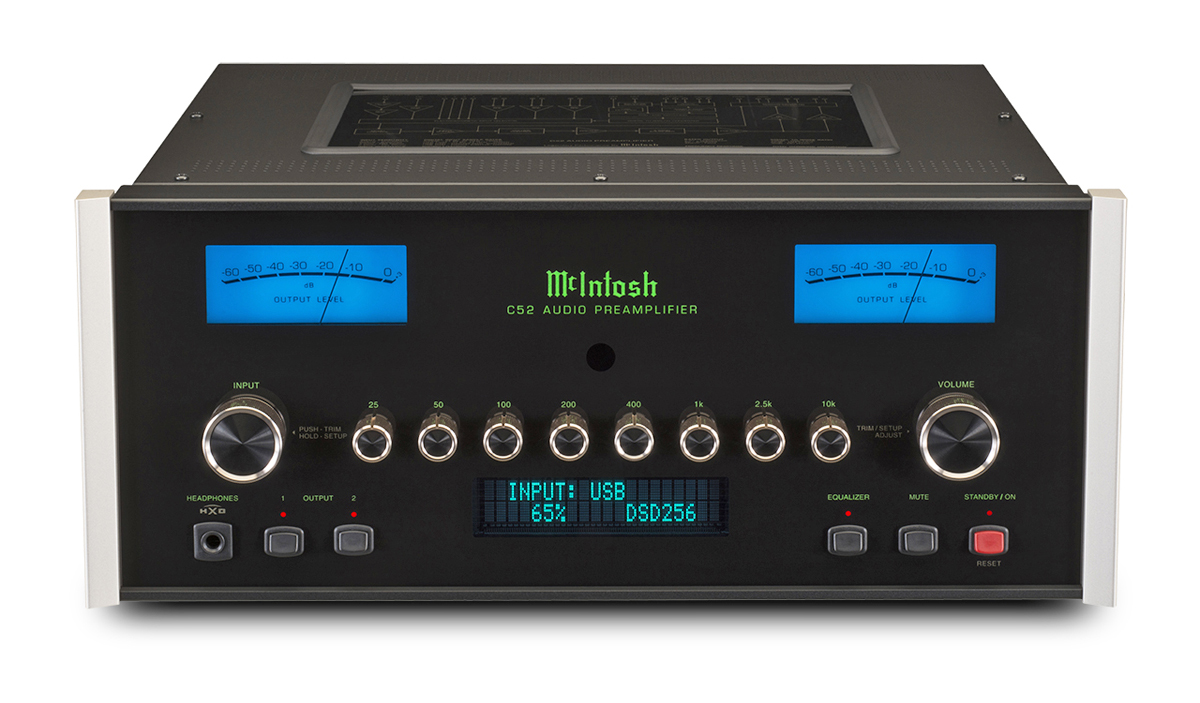 McIntosh C52 and C47
The new C52 is, according to the brand, the most advanced, single chassis solid state McIntosh preamplifier. The new stereo preamp allows connecting virtually any analog components and digital music sources – including those that play the latest high resolution formats such as DSD files.

For connecting analog devices, it includes 3 balanced and 4 unbalanced fully assignable inputs plus 1 each of Moving Coil and Moving Magnet phono inputs. On the digital side, it has 3 optical, 2 coaxial and 1 USB input. The optical and coax inputs will decode digital music at up to 24-bit/192kHz for high resolution audio playback. The C52 is also capable of decoding and playing back DSD files. The USB input accepts PCM signals up to 32-bit/384kHz and supports DSD64, DSD128 and DSD256 plus DXD 352.8kHz and DXD 384kHz. The C52 features a 24-bit/192kHz, DSD digital-to-analog-converter (DAC) and an MCT custom DSD connection for playback of the high definition audio found on SACDs when paired with the MCT450 SACD/CD Transport. 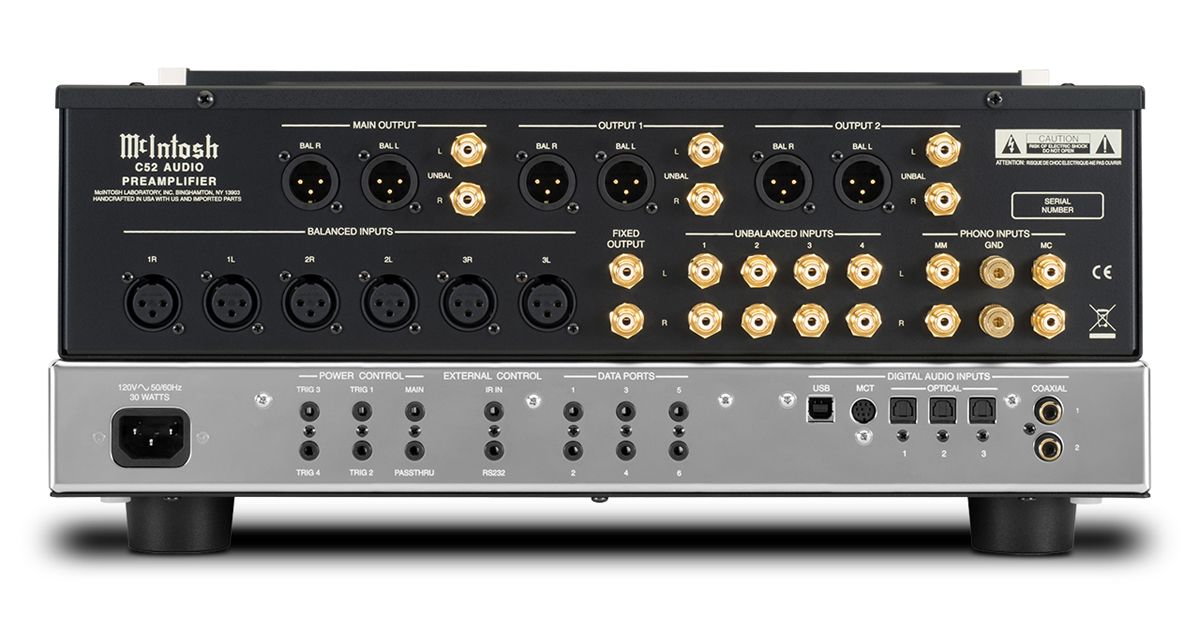 New to the C52 is that all inputs are available all of the time – even when certain inputs are assigned to certain devices. The outputs have also been updated to be easier to operate when bi-amping or tri-amping so that highs and/or lows are not inadvertently turned off. An 8 band analog equalizer allows to fine tune various music sources.

The C52’s classic black glass front panel, blue meters, knobs, illuminated logo and brushed aluminum end caps are all housed in an attractive polished stainless steel chassis that delivers a timeless look. It can be paired with a variety of amplifiers​, speakers, room correction devices, CD players, turntables, tuners and other source components to make a complete home audio system.

The more compact C47 stereo preamplifier offers a total of 12 inputs - 2 balanced and 3 unbalanced, plus 2 optical, 1 coaxial and 1 USB input - and offers the same support for music sources as the C52, including one Moving Coil and one Moving Magnet phono input, up to 24-bit/192kHz for high resolution audio playback, PCM up to 32-bit/384kHz, DSD256, DXD 352.8kHz and DXD 384kHz support. It also includes the SACD input for the MCT450 SACD/CD Transport.

All the three new McIntosh preamplifiers include Headphone Crossfeed Director (HXD) inputs and Home Theater Pass Through for seamless integration into a multi-channel home theater​ system. All three models should be now available. U.S. retail for the C1100 controller and C1100 preamplifier is US$6,500 per chassis, the C52 is US$7,000, and the C47 retails for US$4,000.
www.mcintoshlabs.com
related items