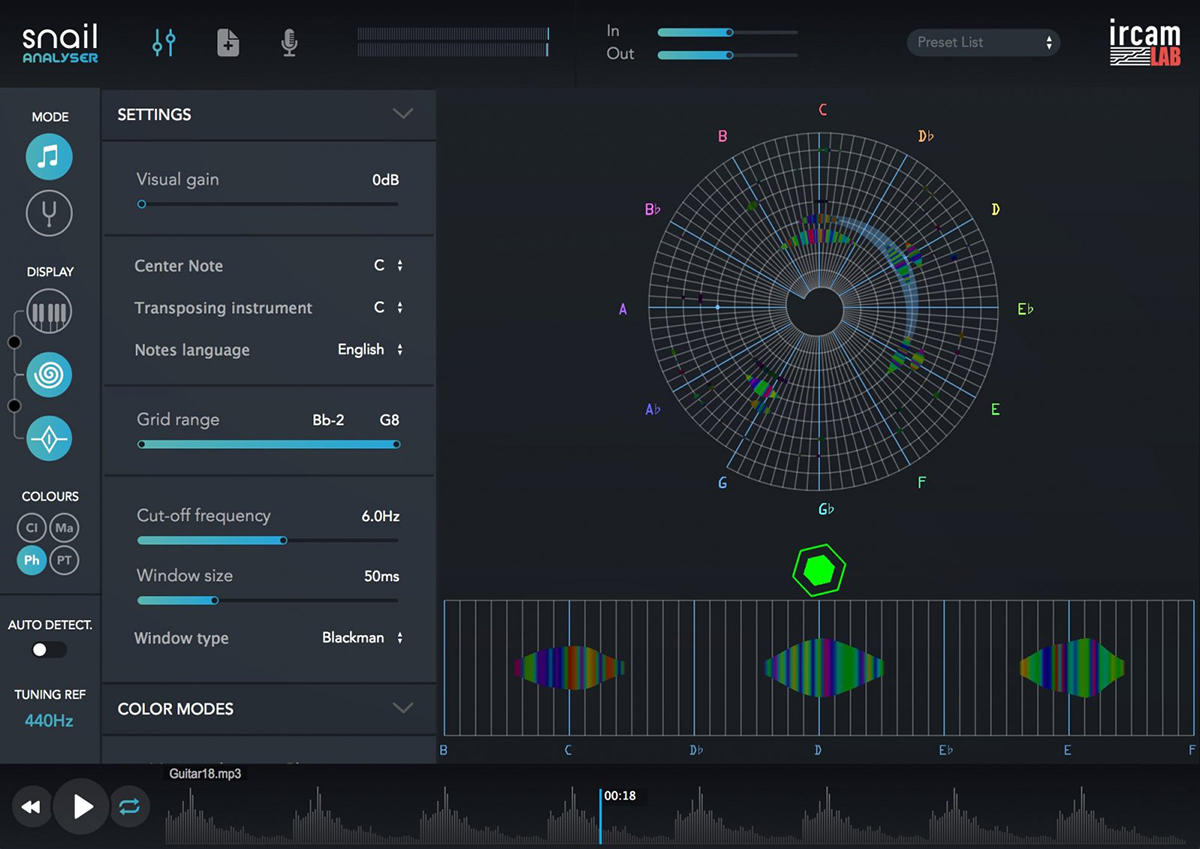 The new Tuner/Analyser software from the Institute for Research and Coordination in Acoustics and Music (IRCAM) is called “The Snail” due to it’s cool spiral interface that represents every note of the scales rolled up from the highest to the lowest audible frequencies. The application is a very high-precision frequency-domain analyzer that delivers an easy to understand representation of sounds based on the scales and notes aligned in spectrally active zones. Resulting from numerous years of research and development, this product is based on a recent patented technology, conceived at the laboratory of Science and Technology of Music and Sound IRCAM-CNRS-UPMC based in Paris, France.

Compared to standard spectrum analyzers based on Fourier-type analysis, the Snail's frequency accuracy is enhanced by a process based on the demodulated phase. Basically, the exploited principle is as follows: If a sound includes a sinusoidal component with frequency 440Hz, the demodulated phase, stemming from a Fourier analysis at frequency 440Hz, will remain exactly constant (as a synchronized stroboscope renders a rotating object immobile).

We can think of a film camera turning at 24 frames per second filming a bicycle wheel turning at 24 revolutions a second, the spokes will appear to be standing still. That means, for a Fourier analysis of frequency at 439Hz compared to a tuning reference of 440Hz, the demodulated phase will turn at 1Hz (as a slightly desynchronized stroboscope makes a rotating object that has a slow movement). We can also think of audio signals 'beating' as there is a interference between two sounds at slightly different frequencies.

This principle is used to build a coherency index in the software, in such a way that a high value is associated with an acceptable deviation, typically adjustable from 1Hz to 10Hz. A dedicated algorithm exploits this coherency index in several ways. It improves the frequency precision at an adjustable rate. It lets users fine-tune the accuracy of the tuner and therefore goes way beyond the global stroboscopic techniques used in some expensive tuners. The Snail analyses all the local spectral components of a sound and renders this information in a convenient visual form. Users can finally see ALL the surrounding frequencies and overtones as well as the basic fundamentals delivered by a sound.

The Snail also delivers a new approach in “tuning” as it also analyses inharmonic sounds by representing all of it’s added harmonics. An old guitar string can be immediately identified as you see it’s resonance that is out of tune and can cause some notes to be more or less present (ringing) than others. Anyone that ever had a guitar that never seems in tune as the scale changes or we move up the fretboard, or detected a problematic resonance, will now finally be able to see it!

The Snail shows the fundamental notes and all the associated resonances and harmonics of any instrument or sound in an easy to see graphic display. It will for example help users see all the notes and harmonics played during an audio playback along with their intensities, so they can figure out what key the song is played in.

The Snail is available at the introductory Price of $49 (List price $99) until Monday February 29th, distributed by Plugivery. The Snail is currently available as a stand alone application for Mac and AAX, AU, VST Plug-in formats. Windows compatibility will be announced shortly.

“IRCAM Lab” is a company owned by IRCAM and managed by Plugivery.com. IRCAM Lab is dedicated to manufacturing powerful audio applications and plug-ins based on decades of research and technological innovation. IRCAM was founded by Pierre Boulez in 1977 under the aegis of the Centre Pompidou and the French Ministry of Culture. IRCAM is one of the world’s largest public research centers dedicated to both musical expression and scientific research. It is a unique location where artistic sensibilities collide with scientific and technological innovation.
http://www.ircamlab.com/products/p2242-The-Snail/
related items