Intel unveiled its new Thunderbolt 3 technology, which updates the previous specification to 40 Gbps, adopts the new reversible USB-C connector, and introduces compatibility with USB 3.1. Great reasons to be excited about the future of (modular) computing now that the world of connectors and interfaces has one compact port that does it all. Suddenly everything starts to make so much more sense! 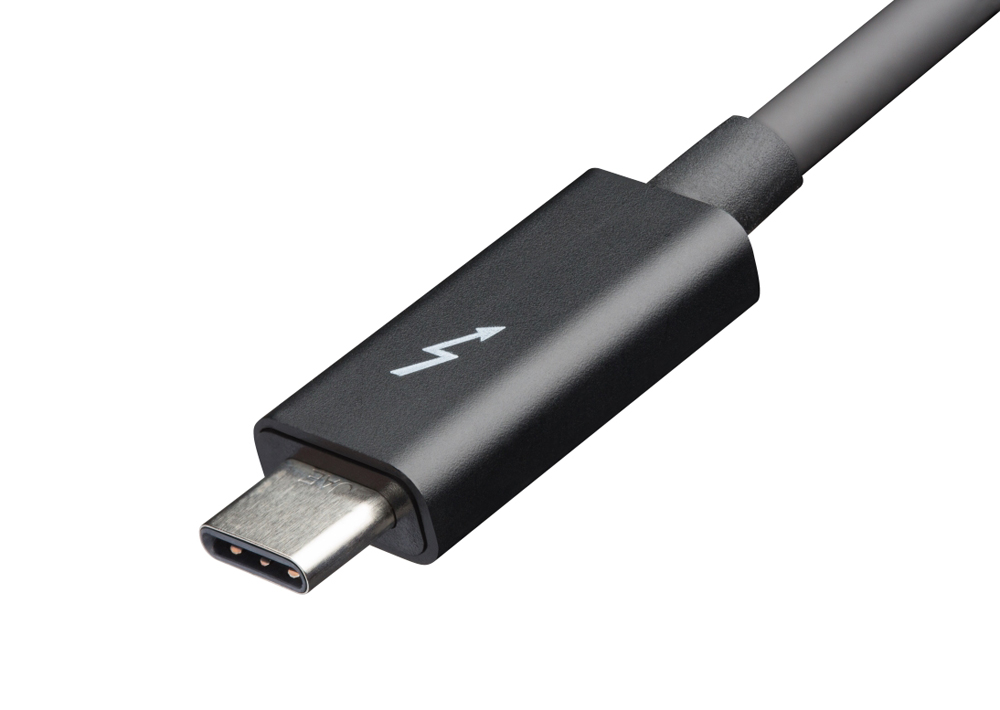 During the Computex 2015 show in Taipei, Intel unveiled Thunderbolt 3 – marking the biggest advancement since the technology’s inception and one of the most important evolutions in the history of personal computers and IT technology in general. Thunderbolt 3 brings Thunderbolt to USB-C at 40Gbps, creating one compact port that does it all. For the first time, one computer port connects to Thunderbolt devices, every display, and also billions of USB devices. A single Thunderbolt 3 cable now provides four times the data and twice the video bandwidth of any other PC cable, while also supplying up to 100 watts of power. Initial products with Thunderbolt 3 are expected to start shipping before the end of this year, and ramp in 2016.

The original Thunderbolt technology was a transformational high-speed, dual-protocol I/O that provided unmatched performance with 10 Gbps bi-directional transfer speeds - updated to 20Gbps bi-directional in 2013. It provides flexibility and simplicity by supporting both data (PCIe - from which Gigabit Ethernet, FireWire, or eSATA devices are easy to interface) and video (DisplayPort - compatible with DVI, HDMI, and VGA displays via adapters) on a single cable connection that can daisy-chain up to six devices.

As Apple clearly demonstrated (and Apple was pretty much involved with Intel in the technology development), Thunderbolt enabled new and flexible designs and thinner form factors by providing the ability to expand the system capabilities on a single cable. Currently available in all Apple computers, Thunderbolt proved to be the ideal choice for media creation and connectivity applications, by combining high bandwidth, low latency, and highly accurate time synchronization.

The Thunderbolt 2 update in 2013 improved the data rate to 20 Gbps and saw the technology adoption growing from a standard feature of Mac computers, also to a few PCs and motherboards, as well as many peripheral devices. At 20 Gbps, Thunderbolt 2 enabled simultaneous 4K video file transfer and display. Still, for almost a year, nothing happened in the Thunderbolt front, OEMs never started shipping many of the prototypes shown, Microsoft never introduced support for Windows and the industry started exhibiting signs that something big was in the works. The announcement that the USB Type-C specification, approved in September 2014, would adopt a reversible connector very similar to Apple’s Lightning connector was also a clear sign that Cupertino was indeed working with Intel and the USB consortium behind the curtains. 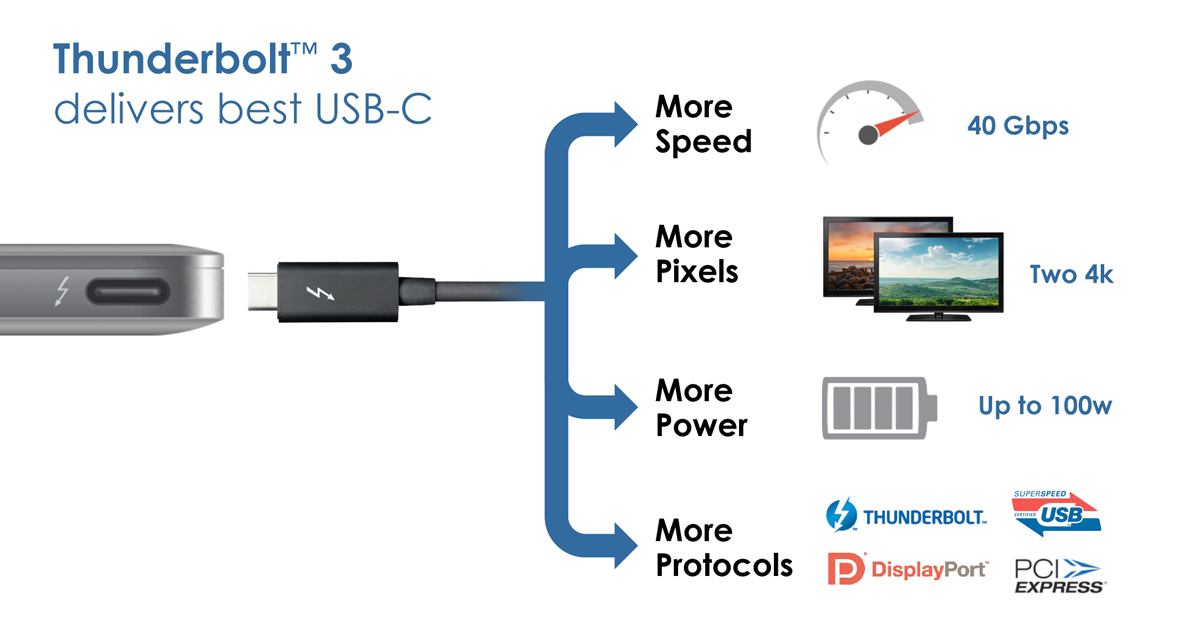 Thunderbolt 3 and USB-C
Apple’s announcement on March 9 of its new ultra-thin MacBook, using only one single compact USB-C port for data transfer, video out, and charging should have served as a warning that something very special was happening, but unfortunately it also left users confused and many companies with strong commitments on Thunderbolt technology very worried. 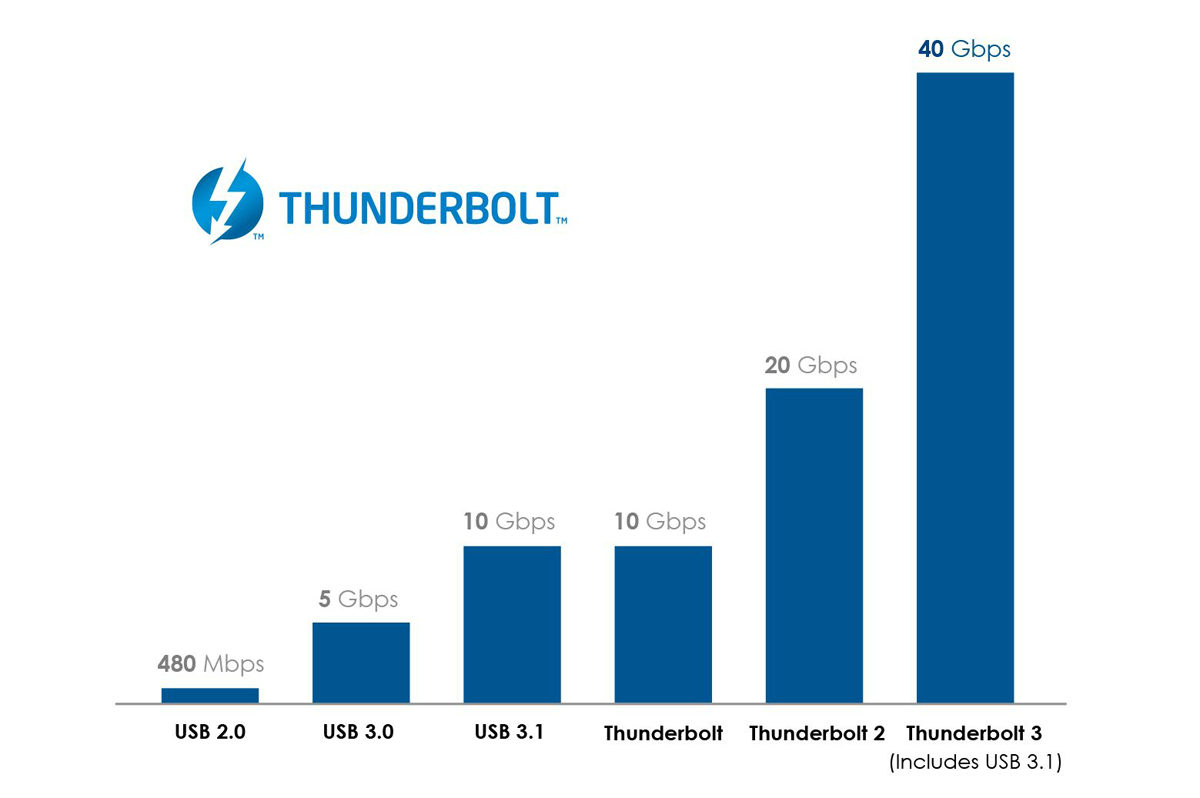 Now, suddenly it all makes sense. Intel unveiled Thunderbolt 3, introducing support for USB devices to its original specification, but also, replacing the original mini-DisplayPort connector being used for Thunderbolt (designed by Apple) for the same USB-C connector, which (apparently) Apple also designed. This means that finally, the world will benefit from a single connection for everything! As Navin Shenoy, vice president in Client Computing Group and general manager of Mobility Client Platforms at Intel Corporation declared: ”OEMs and device developers are going to love it.”

The USB-C connector is small, reversible, fast, supplies power, and allows other I/O in addition to USB to run on it, maximizing its potential. So in the greatest advancement since its inception, Thunderbolt 3 brings Thunderbolt to USB-C at 40Gbps, fulfilling its promise of creating one compact port that does it all.

Computer ports with Thunderbolt 3 will provide 40Gbps Thunderbolt – double the speed of the previous generation, USB 3.1 at 10Gbps, and DisplayPort 1.2 (which supports 4K and 5K displays). In “Thunderbolt mode”, a single cable now provides four times the data and twice the video bandwidth of any other cable, while supplying power. And supports new things, such as two 4K displays, single-cable docks with charging, external graphics with 4 lanes of PCI Express Gen 3 (what the gaming and computer graphics industry was waiting for), and built-in 10 Gigabit Ethernet networking.

At 40Gbps, Thunderbolt 3 allows a 4K movie transfer in less than 30 seconds and connecting and controlling two 4K 60 Hz displays since the bi-directional, dual-protocol (PCI Express and DisplayPort) supports up to 8 lanes of DisplayPort 1.2 (HBR2 and MST). It also provides a peer-to-peer connection at 10 GbE speeds to quickly transfer files between computers, perform PC migrations, or set up small workgroups with shared storage. Solutions and products built to Thunderbolt and Thunderbolt 2 specifications will work with Thunderbolt 3 via an adapter. 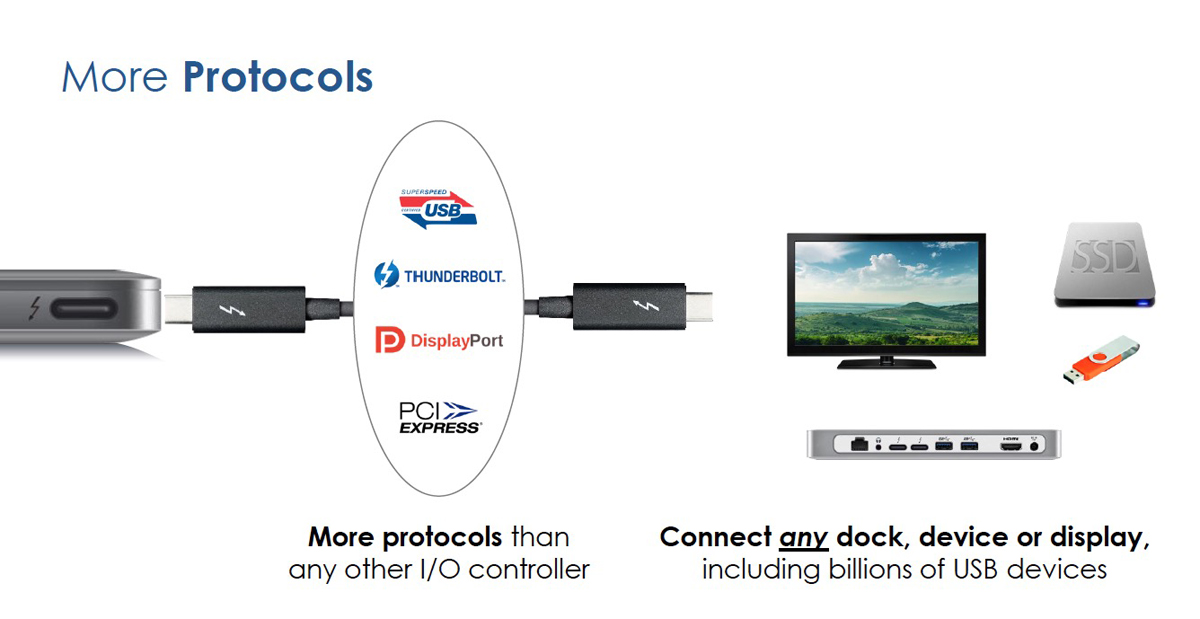 Considering that USB-C connectors are being quickly adopted on new-generation smartphones and the fact that new Windows 10 machines will probably support Thunderbolt 3 also, the announcement’ implications for all industries are going to be huge. From video projectors to cameras and audio interfaces, suddenly standardizing on a single connector makes much more sense.

According to Intel, initial products with Thunderbolt 3 are expected to begin shipping before the end of 2015, and ramp in 2016.
thunderbolttechnology.net
related items