It may sound unbelievable that the power of a smartphone we carry in our pocket is able to process sound and actually replace a rack full of equipment. One of the solutions that triggered that phenomenon was the iRig interface by IK Multimedia and sold already one million units. Now they have introduced a successor, the iRig 2, a more universal, flexible and great sounding unit. 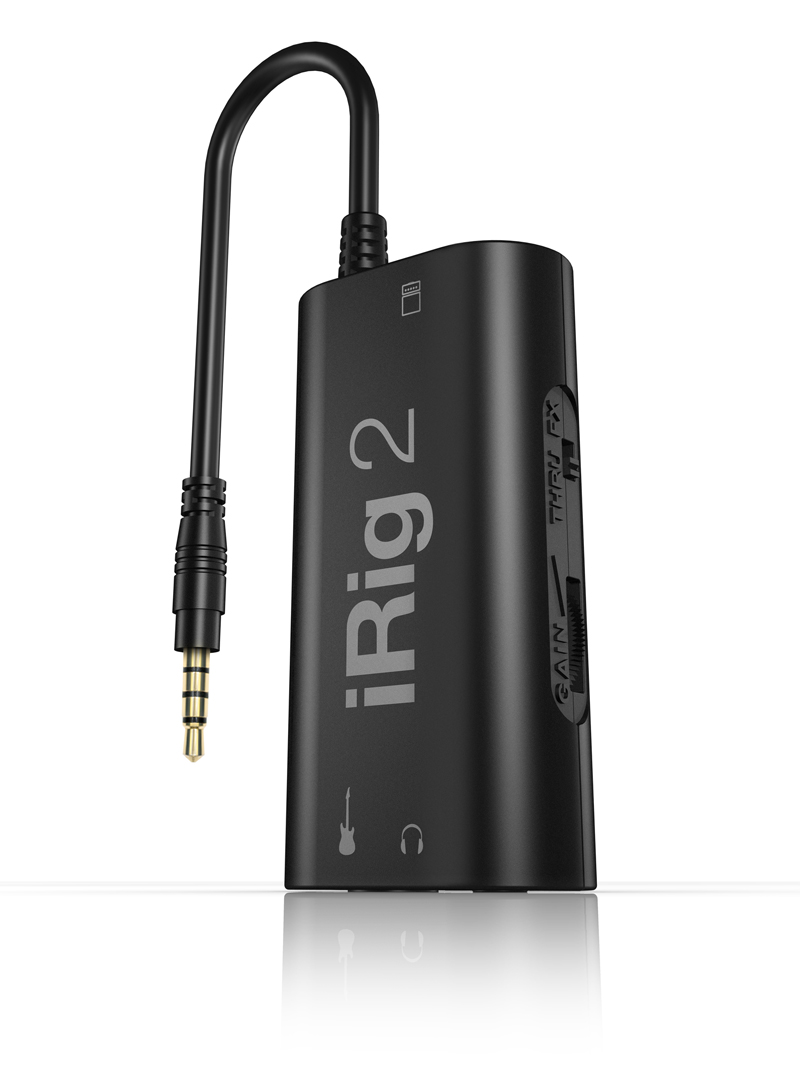 IK Multimedia announced it’s shipping iRig 2, the sequel to the most popular guitar interface of all time. In 2010, for the first time ever, the original iRig allowed guitar and bass players to plug into their iPhone and use their mobile device to play, practice and record with apps like IK’s AmpliTube, Apple’s GarageBand and thousands more.

5 years after, and with over one million units sold, IK is now introducing iRig 2. A significant upgrade, it improves on its predecessor by providing better sound quality and more universal compatibility than ever before - and it does this while maintaining the convenience and ease-of-use that have made it such a staple piece of equipment in the arsenal of millions of musicians around the world.

Just like its predecessor, the new iRig 2 plugs directly into the mini jack input of a mobile device. It lets musicians send an instrument signal to apps, such as IK’s AmpliTube, while also providing on-board output for real-time monitoring.

iRig 2 now comes with gain control, which lets users precisely adjust the input gain of their instrument to match their mobile device. This means that it can be customized to always provide the best sound, no matter what type of guitar, bass or line-level instrument or device is used.

In other words, iRig 2 sounds just as good connecting a wailing humbucker electric guitar to an iPhone 6 as it does a jazzy archtop or mellow electric piano to a Samsung Galaxy Note 4.

iRig 2 now not only works with iPhone, iPad, iPod touch and Mac, but that it also supports a range of Samsung devices. Using the Android version of AmpliTube, iRig 2 is fully compatible with Note 3, Note 4, Galaxy Edge, Galaxy S5 and also the forthcoming S6.

Plus iRig 2 now also offers compatibility with Android 5 devices. As the most convenient way to bring a guitar signal into a mobile device, it lets musicians use the hundreds of available tuning and recording apps available, such as the forthcoming UltraTuner for Android. 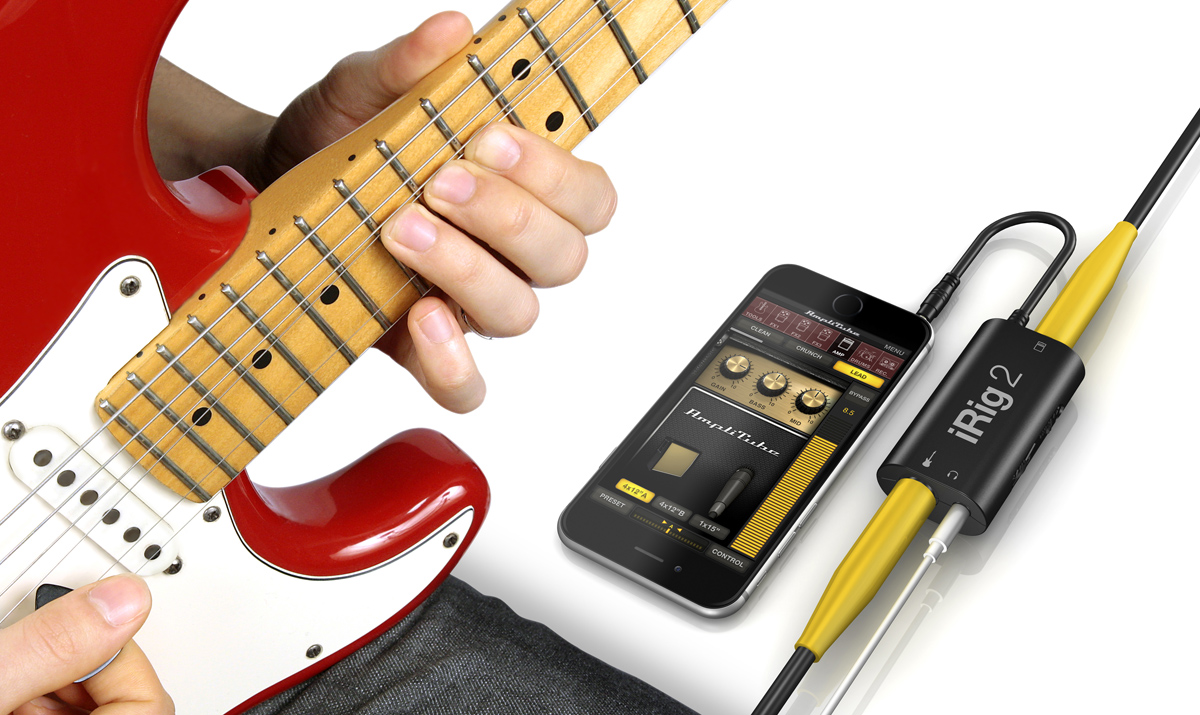 Its new 1/4” amplifier output, in addition to its traditional 1/8” headphone output, allows iRig 2 to be plugged directly into a guitar amplifier or powered speakers without an adaptor. This helps to keep all cable connections tidy and organized.

A new FX/THRU switch allows iRig 2 to send either a wet or dry signal through the device. This means that guitarists can play live with an amplifier and use their mobile device with a tuner app, such as IK’s UltraTuner, or a recording app, such as IK’s iRig Recorder, to record a dry signal for further processing.

iRig 2 also comes with a clip and a velcro strip so it can be firmly installed on a microphone stand, avoiding accidental disconnection. 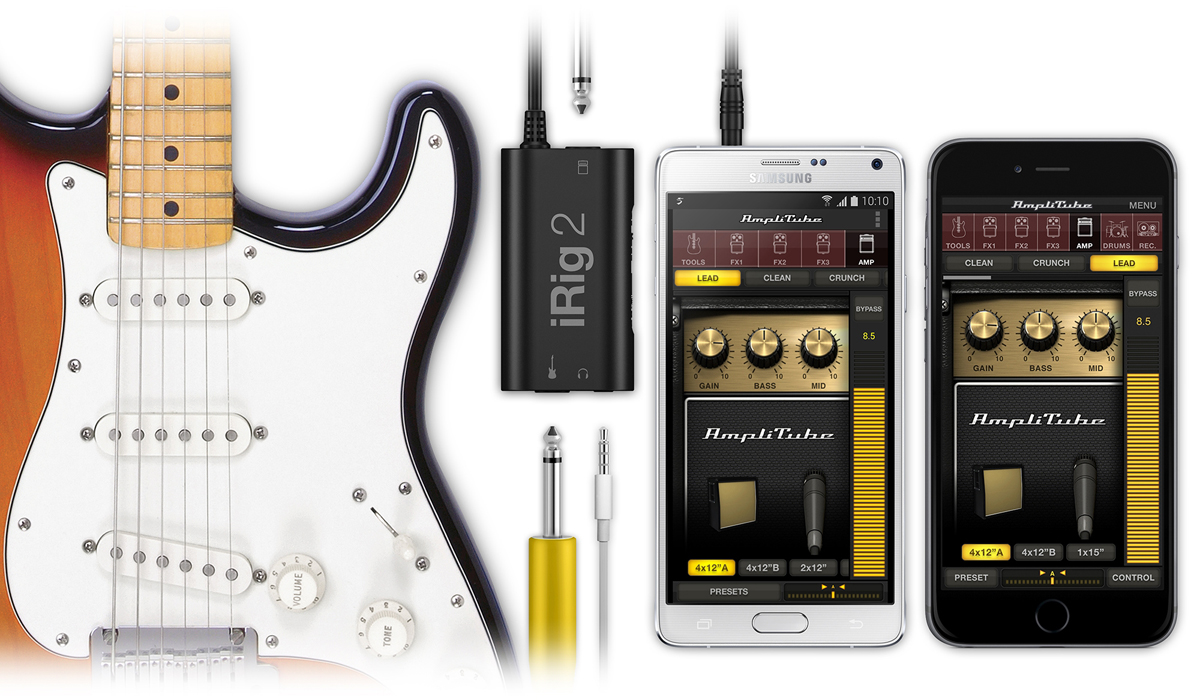 iRig 2 comes with a powerful cross-platform suite of apps and software that includes free versions of AmpliTube for iOS, Mac and Android Samsung. And while iRig 2 is made to pair with the AmpliTube app, it’s also compatible with many other mobile music creation apps and utilities, such as Apple’s GarageBand, Samsung’s Soundcamp and literally thousands of others.

The new iRig 2 interface is sold for $39.99, the same price of the original iRig.
www.irig2.com | www.amplitube.com