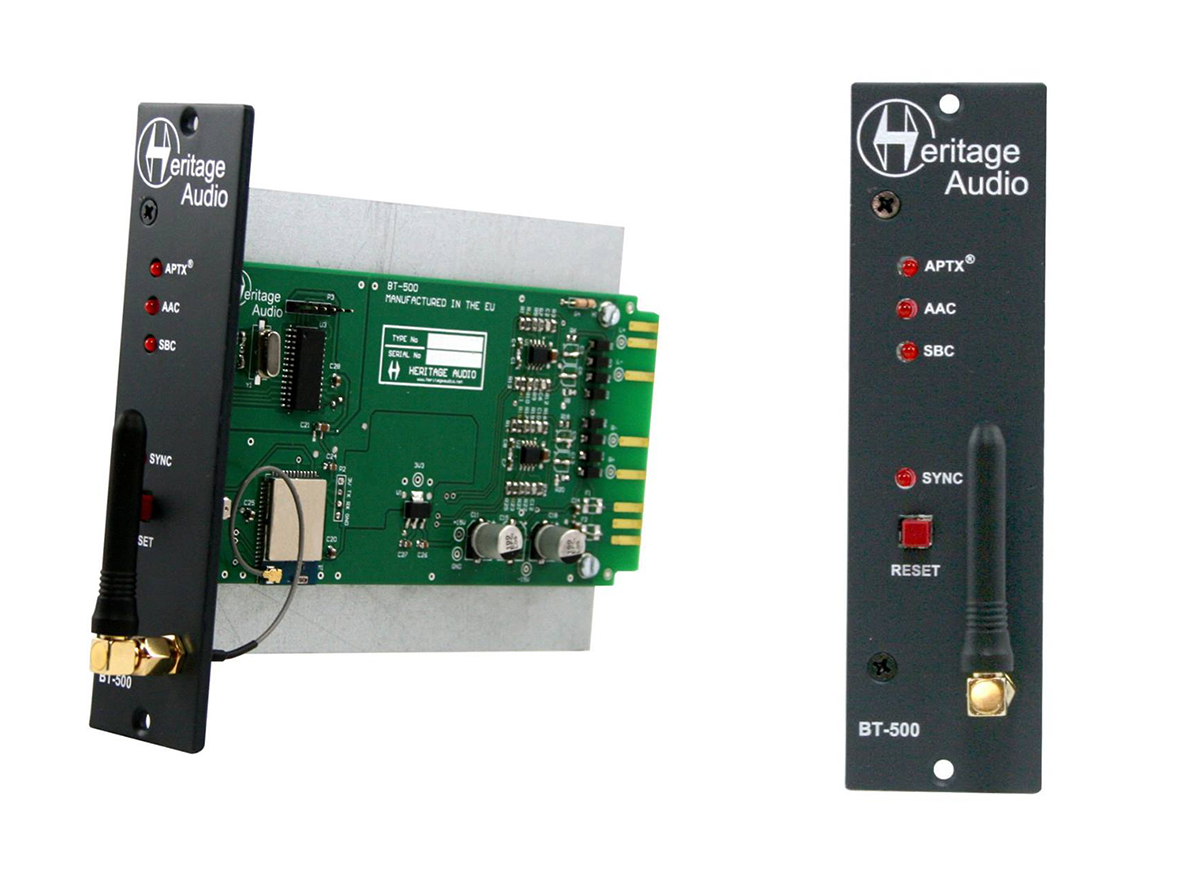 According to Heritage Audio, this new product is the company ́s entry into the Internet of Things and anticipates a whole new, additional line of products to the company’s already acclaimed analog classics. “No other current product, be it 500 series, rack or other format, has the features of the BT-500, which finally solves the connectivity problems of mobile devices in a professional studio environment,” they claim.

Heritage Audio was created in 2011, in Madrid, following five years of R&D efforts from a group of Spanish pro audio and electronics engineers with a passion for classic analog studio equipment. Combining a vintage look and sound with key features not found in ancient equipment, Heritage Audio expanded the sonic palette of 1970s Series 80 consoles and outboard racks, creating a comprehensive catalogue of 500 series modules, from line input equalizers, compressors and microphone preamplifiers, including a unique take on the classic Neve 1073 circuit, as well as tabletop units. All Heritage Audio products are built employing only vintage accurate components and time consuming hand wiring techniques to make it sound and last as long as the originals.

With such a dedication to this vision, it might seem strange to learn that Heritage Audio would focus their attention on a wireless streaming solution, but apparently that’s what they did, in a worthy effort to eliminate mini-jacks in the studio environment. The new BT-500 streams audio from any mobile device over Bluetooth and delivers a fully balanced, +22dBu stereo output. The solution employs the latest generation of audio specific Bluetooth technology, the best available codecs supported by iOS and Android devices, and a state-of-the-art, Burr Brown-based analog signal path.

According to the company, all this is intended to solve the already classic, irritating problem of connecting mobile devices in the studio, which usually is done using mini-jack to XLR adaptor cables with all the limitations of the devices analog output and integrated converters. “Listening to references on the iTunes Store, recordings sent by email, Spotify, YouTube, you name it. You do it every day, all the time. Nevertheless integration has been non convenient to say the least, until now,” they add.

Focusing on sound quality over Bluetooth, the BT-500 module automatically recognizes the best codec option supported by the connected device and uses it for streaming. Since Apple ́s iTunes Store and YouTube use AAC as a native format, so streaming from an iPhone or iPad will result in a lossless transmission, which Heritage Audio says will be superior to any analog wired connection. And since the vast majority of Android devices have already adopted the nearly-lossless aptX codec (CSR/Qualcomm), the module will use that technology. In case a device doesn’t support AAC or aptX, the BT-500 will stream audio using the classic Bluetooth SBC codec. The front panel, featuring an integrated antena, will display which of the technologies is being currently employed by the connected device.

The analog outputs on the 500 series module are a fully differential Burr Brown balanced output stage which delivers a full 0dBfs = +22dBu output, able to drive a load of 600 ohms. This allows direct level comparisons while mastering or mixing with Apple ́s iTunes Store or mobile stored reference mixes. The BT-500 features one XLR output for right/mono channel and an input connector (male XLR), which can be used as the Left output for a stereo XLR balanced connection, using an adapter supplied with the module.

Heritage Audio says the new BT-500 module will be available in June 2016 for $199 MAP - certainly an affordable price to solve a frequent problem in today’s studios.
www.heritageaudio.net
related items