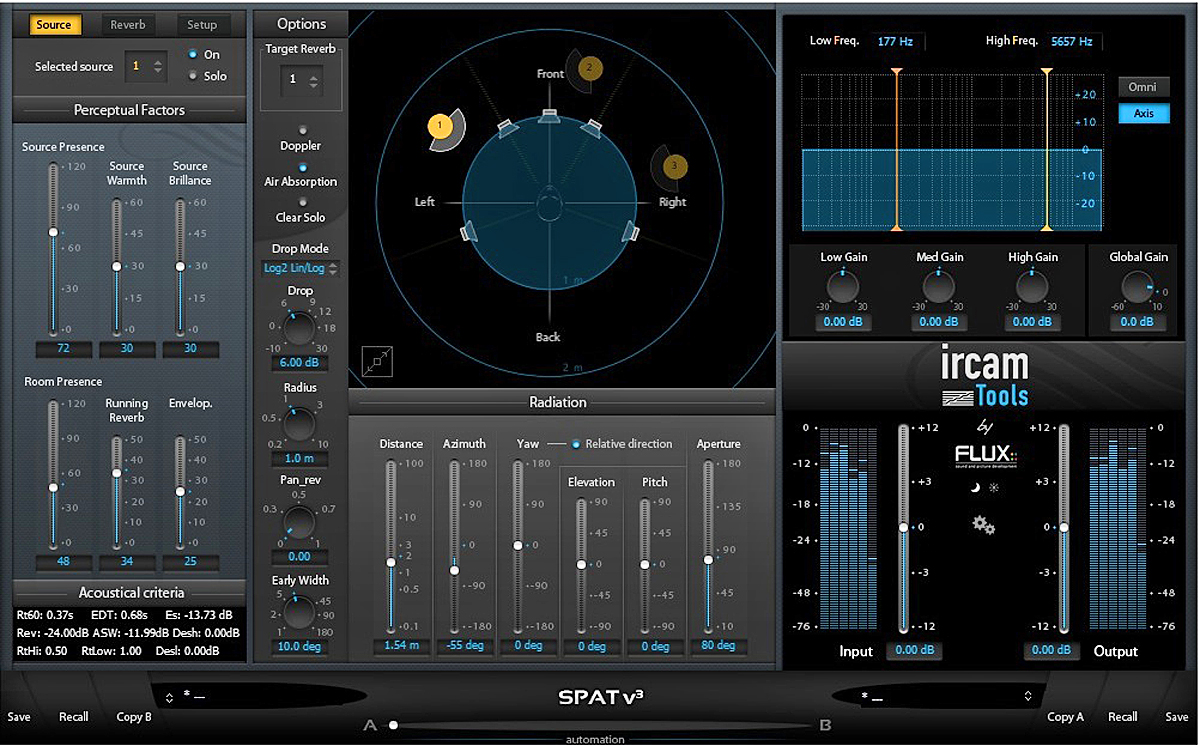 With more than a decade of research performed by the Acoustic and Cognitive Spaces Team at Ircam, being at the forefront of scientific and technological innovations, Spat v3 is the most advanced and sophisticated tool for room acoustics simulation and localization ever designed, managing both spatialisation (source localization) and room acoustic simulation in a truly consistent and visually logical way. 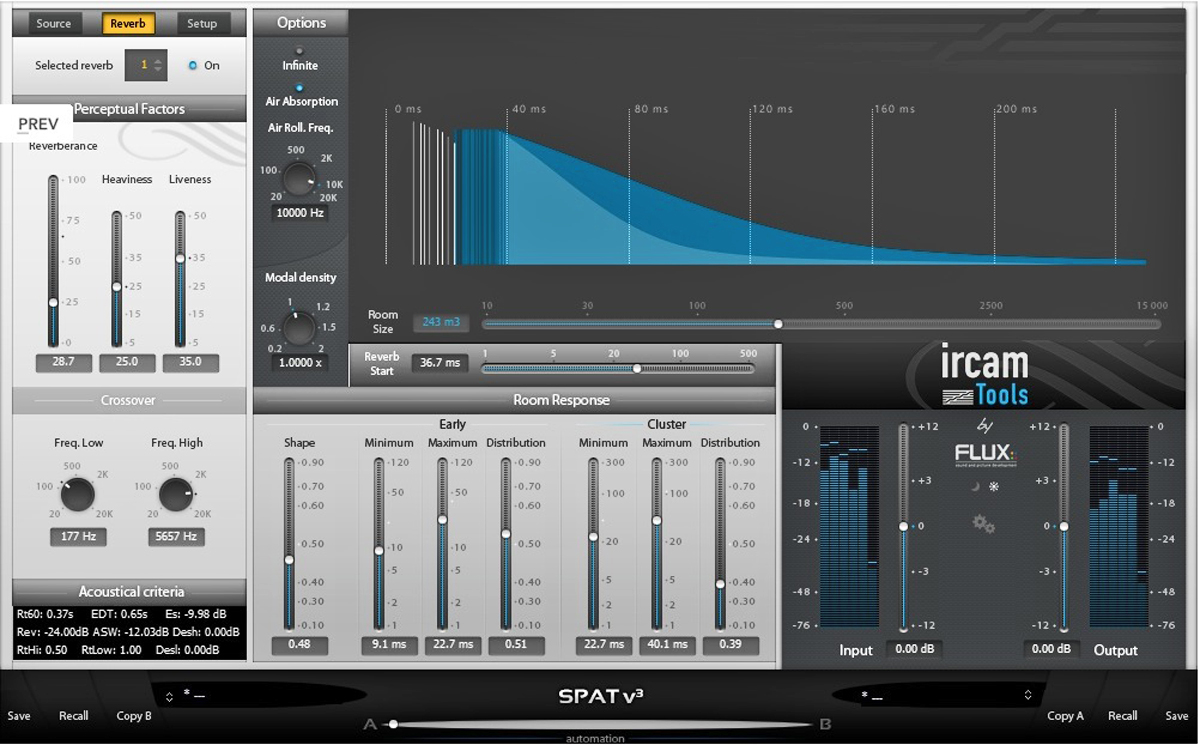 Designed for surround and multi-channel use, Spat v3 presents the option to set up the output arrangements providing a variety of stereo and surround configurations, including subwoofer configuration. With eight input and output channels available in SPAT, configurations up to 7.1 and 8.0 are feasible. Each of the up to eight incoming audio channels is internally mapped to a range of Virtual Sources localized in a 3-D space, and connected to a room (a reverb). Up to three rooms in parallel are provided, presenting the option to simulate complex spaces (coupled room acoustics). 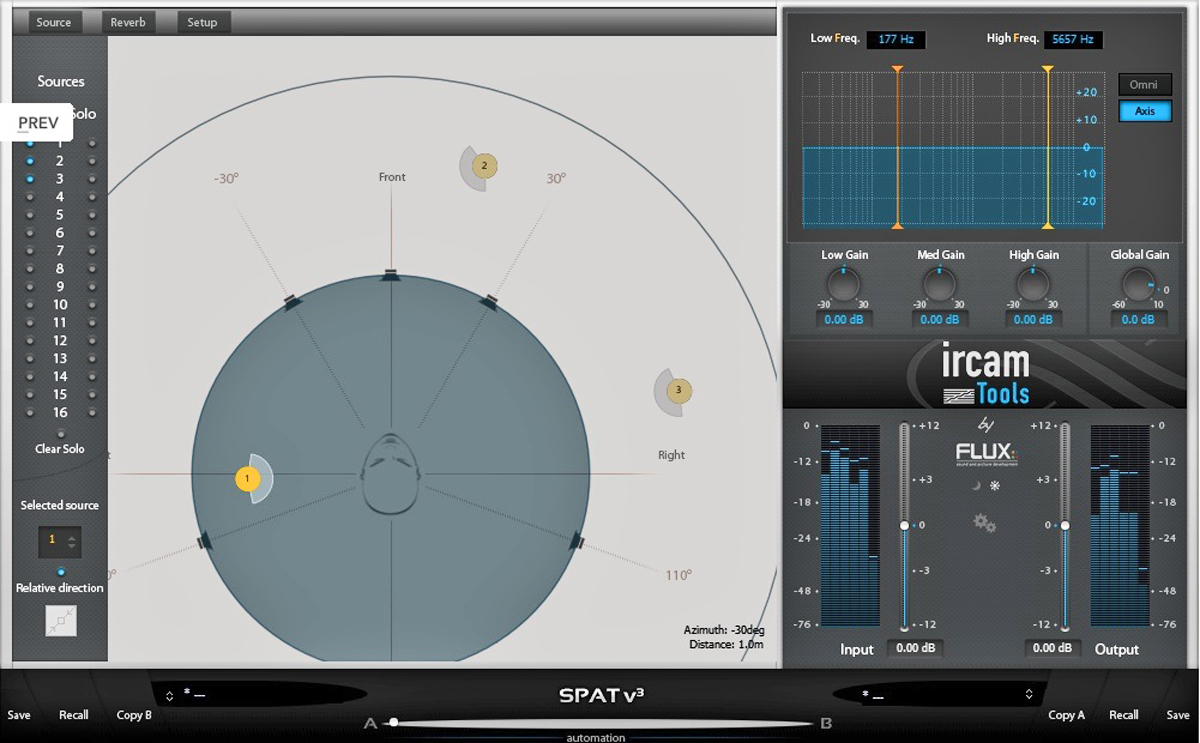 SPAT v3 may also be used to position and animate sources with all reverbs disengaged. This advanced feature set makes SPAT an indispensable tool for Automatic Dialogue Replacement (ADR) work and for post-production professionals in general.

SPAT has been embraced by many within the community of orchestral composers as a tool for placing instruments on a virtual performance stage for position-correct and convincing orchestral emulations. SPAT v3 adds support for AVID’s new AAX Native plug-in format. In addition to AAX, Audio Units and VST remain supported on both Mac and Windows. SPAT v1 remains available for users of RTAS systems.

All Flux v3 audio tools support both 64- and 32-bit systems with sample rates up to 384K. The Flux v3 platform delivers exceptionally rich, informative and responsive metering with near zero CPU cost by distributing UI processing to the host system’ GPU. All Flux audio tools are 8-channel ready for surround applications up to 7.1. The only exception is the distinctly named Stereo Tool freeware.

SPAT v3 is available to current SPAT users for no charge. In celebration of both the release of SPAT and the completion of the Flux migration to v3, Flux is offering SPAT, the IRCAM TOOLS bundle containing SPAT and all upgrades to SPAT at a 30% discount, effective immediately.