FaitalPRO is promoting a new website in Russian, completely dedicated to reinforce the professional Italian loudspeakers brand sales and support for the region. The website was created in collaboration with its Russian distributor “ООО Спектр” – Spektr Ltd., in English.
A new website in Russian and a new local sales and support structure is part of a strategic move by FaitalPRO to reinforce its distribution in the region. The new FaitalPRO Russian website project was achieved in cooperation with Russian distributor, George Vorozheykin, who recently created a new company to dedicate himself to the exclusive distribution of the Italian professional loudspeakers. The original name of the new company with the exclusive on FaitalPRO loudspeakers is “ООО Спектр," which translates to “Spektr Ltd" in English.

FaitalPRO is the professional division of Faital SpA located at Milan’s doorstep, in San Donato Milanese. Its strength derives from a multinational group in the audio field, which has been designing and producing top quality loudspeakers for over 50 years based on the application of highly advanced production processes. 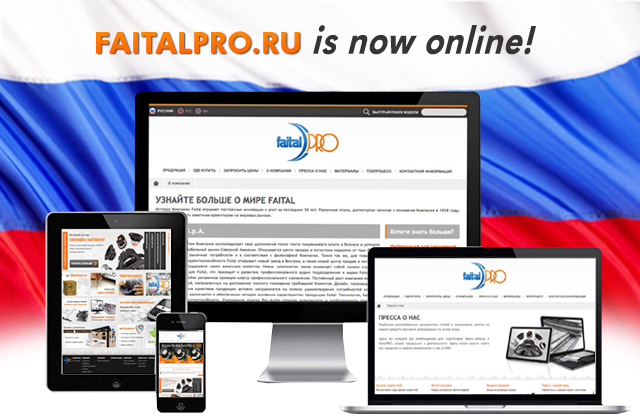 Gianluca Turra, FaitalPRO area manager, responsible for the Asian and Russian markets, states: “The new website lays a very important foundation for the further expansion of FaitalPRO on the vast, decisively important Russian market. The site itself is destined to become a fundamental tool for our clients, as a rich source of information in areas with enormous potential.”

FaitalPRO local distributor in the region, George Vorozheykin, is committed to the exclusive sale of professional FaitalPRO loudspeakers through a new business organization, including two experienced sales professionals who have been supporting the pro-audio market in these territories for over 4 years.

As FaitalPRO details, until now, the most popular driver models in the region have mostly been 18" and 12" woofers. FaitalPRO drivers like the 3FE25, 3FE22, 12FH520, HF14AT, 18HP1060 / 18XL1600, and 15HP1060 models are also favorites in this territory. The distribution of the new driver range, including the new high-frequency drivers HF103, HF108 and HF109 models is currently an opportunity to expand the brand’s market share.

The new distribution company has two distinct operational headquarters in Moscow and Krasnoyarsk, each strategically located in a vital hub of the country. Spektr will guarantee technical support services and will be able to respond to urgent orders with its own stock of loudspeakers, available even in significant quantities. According to FaitalPRO, this will help solving existing problems, avoiding longer waiting times needed to send products directly from Italy.

“We can trust George Vorozheykin and Spektr to offer timely service and support on enclosure design with important technical advice. In fact, the owner of the Russian company enjoys an excellent reputation in the professional audio field and has a renown technical background,” states Gianluca Turra.

George Vorozheykin himself explains: “I’ve been active in my father’s company for four years, in the same fields of professional audio and amplification in general. Recently, I’ve decided to create a new company specifically for the distribution of FaitalPRO products. Starting with committed distribution on the Internet and presence at local trade shows, such as Music Moscow and the current Prolight+Sound NAMM Moscow, I created an independent company that exclusively strives for the distribution of FaitalPRO products, both wholesale as well as retail."
“We're also active on several blogs, as well as on the Russian social network vk.com, where the group is called vk.com/faitalpro."