At the IBC 2014 show in Amsterdam, Digigram will introduce a new low-latency, high-density LX-MADI PCIe Sound Card. The new card offers 64/64 MADI I/O and a latency down to 3 ms. Digigram will also feature a new MADI optical interface option on its LX-IP RAVENNA PCIe Sound Card.
French company Digigram announced that it will showcase the new LX-MADI PCI Express (PCIe) sound card, the latest addition to the company’s range of sound cards engineered for broadcast applications, at the International Broadcasting Convention (IBC) 2014 (September 12–16) in Amsterdam.

Equipped with an optical MADI interface, Digigram’s new LX-MADI PCIe sound card supports a 64/64 I/O channel count with low roundtrip latency down to 3 ms. An embedded 64 x 64 matrix gives users routing and direct monitoring capabilities, along with record and play functions. Because the LX-MADI PCIe sound card is a hardware solution, it offers high stability regardless of the computational load presented by other applications running on the host system, such as editing, processing, ingest, and playout. 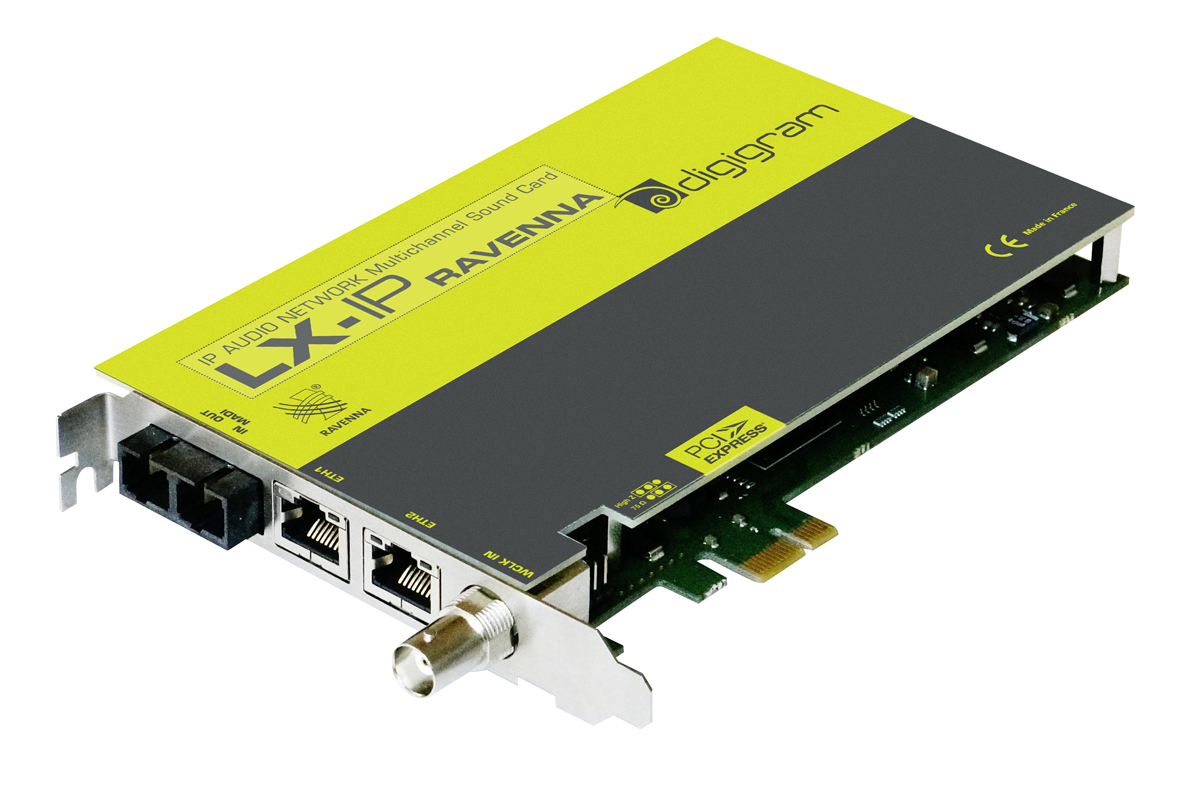 “The industry’s move from costly proprietary equipment and standards toward commercial off-the-shelf, IT-based systems running common media-oriented IT protocols is not just inevitable, but well underway,” said Pascal Malgouyard, head of product marketing at Digigram. “While IP audio has revolutionized connections between the studio and other locations, it has not yet taken hold within the studio. However, the RAVENNA technology and new AES67 standard address key audio-over-IP (AoIP) interoperability issues, thus opening the door to IP audio in the studio environment. By adding an AES10 MADI option to our LX-IP RAVENNA sound card, we make it easy for users to accelerate their own transition from legacy synchronous digital audio to IP audio and, in turn, begin taking advantage of its many uses and cost benefits.”

Because the Digigram sound card also includes an embedded routing matrix, users can make a direct connection—with no latency—between RAVENNA/AES67 streams and MADI channels, whether for monitoring purposes, redundancy, or simply creating a bridge between the MADI and IP audio realms. Control of the dual interface card is straightforward, thanks to its full compatibility with the standard EMBER+ protocol.

The new Digigram cards will be shipping by the end of 2014.
www.digigram.com
related items