Important to note that, during the 2015 CES Show, Chord Electronics also launched the new Hugo TT, a new ‘desktop’ Hugo DAC/headphone amplifier with improved connectivity and performance, plus remote control, an alphanumeric LED display and a high-quality asynchronous B-type USB connection. As Chord Electronics’ founder and owner John Franks explains, “The idea for the Hugo TT came when we realised that Hugo’s performance was such that many customers were using the device as a reference desktop unit, when really it was primarily designed for mobile use. So, Hugo was not optimised for use in home systems: a minority of audiophile cables with the very largest RCA and USB terminations sometimes proved difficult to accommodate and the shorter range of the original mobile Hugo’s Bluetooth pairing distance could sometimes cause problems in larger homes.

“We noted all the suggestions from desktop users and we definitely took notice when people indicated they loved the sound of Hugo and would buy one in an instant if it had additional XLR outputs, greater input visibility and a remote control! So, we set about making a people’s Hugo to address as many of these wishes as possible. We also doubled the battery storage and added 10,000,000 microfarads of supercapacitor back-up across the batteries. None of these features would have been possible within Hugo’s existing dimensions, but in the larger Hugo TT, they are all comfortably inside.”

The Hugo/2Qute DAC stage within the new CPM 2800 MkII offers support for up to 32-bit/384kHz audio via BNC coax and USB, and 24-bit/192kHz over optical. DSD64 is supported on all inputs and DSD128 is supported via coax or USB (all via DoP). The amp features a Class 2 USB input which has been galvanically isolated for greater sonic performance; this has been achieved using a novel technique which allows for very high data rates of up to 384kHz; the input is driverless on Apple and Android devices, with (ASIO included) drivers for Windows devices.

Like the Hugo TT, the new CPM 2800 MkII also offers wireless connectivity via Chord’s high-quality custom-designed aptX Bluetooth receiver, which uses a very simple pairing procedure and has a range of up to 30 meters. A large, easy-to-read front-panel screen, which is a departure from traditional Chord amplifiers, shows input type and volume information and can easily be seen from a typical listening position. Further features include four heavy-duty gold- plated binding posts, remote control and Chord’s legendary aircraft-grade aluminium chassis and casework. 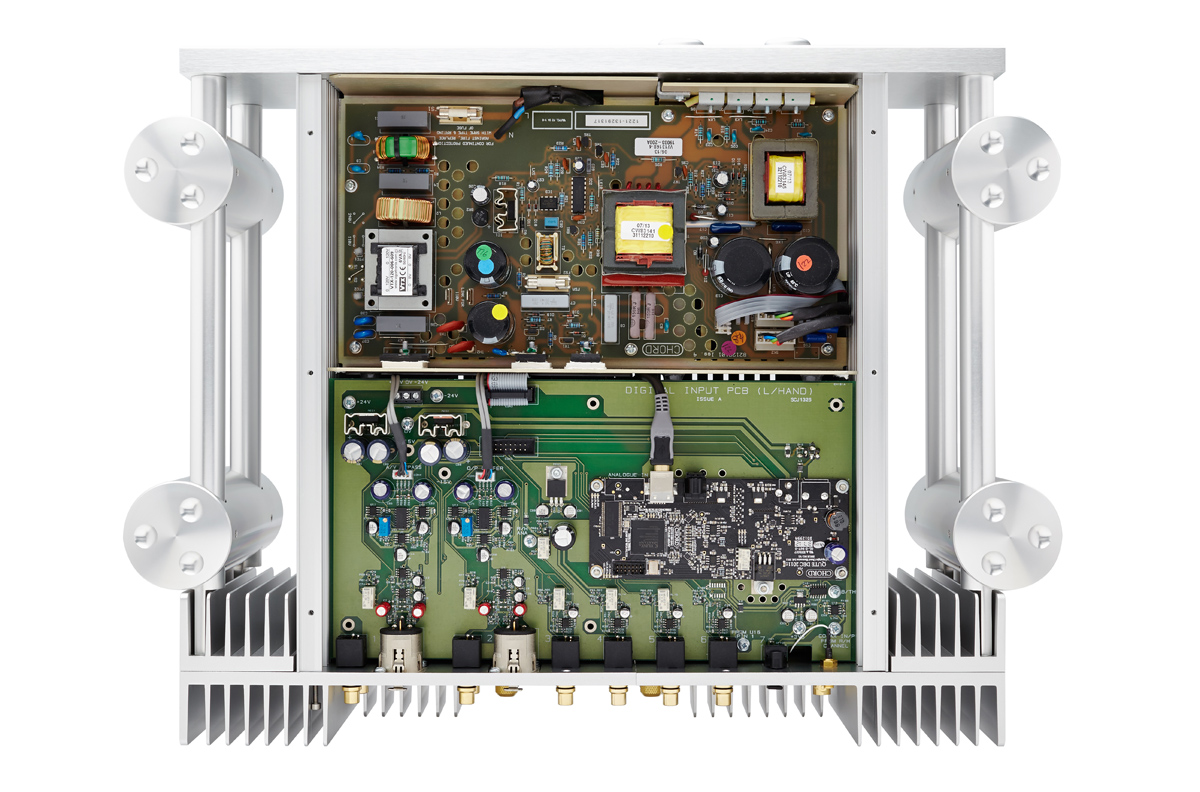 The CPM 2800 MkII’s power is delivered courtesy of Chord’s award-winning proprietary ultra-high-frequency power supply, which has the ability to store energy far more efficiently than conventional designs. The technology gives the amplifier section enormous reserves of instantly delivered, precisely controlled power, which is capable of taming even the most demanding loudspeaker. The rated output power is 120Wrms per channel @ 0.05% distortion into 8 Ohms; or 170Wrms per channel into 4 Ohms.

For home cinema compatibility, an A/V bypass input is incorporated, so that the CPM 2800MkII can be used in conjunction with an A/V processor without the need for a separate amplifier.
www.chordelectronics.co.uk
related items