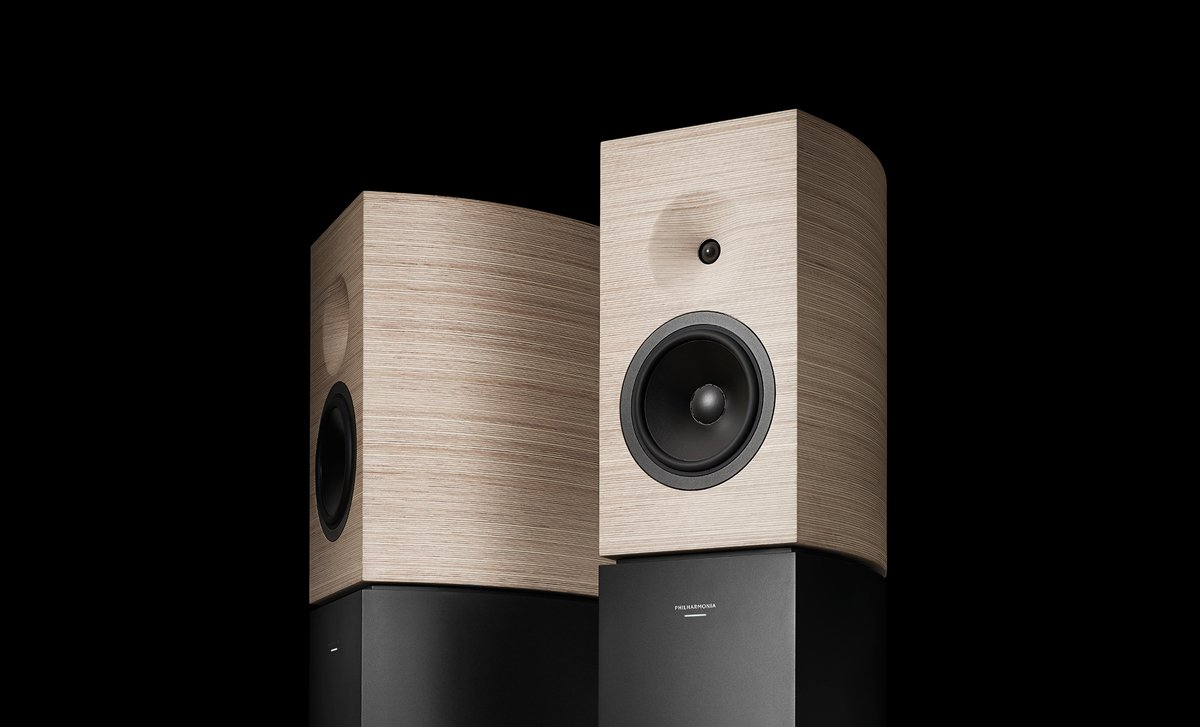 The new speakers were initially created specifically for the Philharmonie de Paris recording and mastering studios, which were built to capture performances by the world's most prestigious symphonic orchestras. The new speakers were designed by Michel Deluc, Amadeus’ Director of Research & Development, along with world-renown architect Jean Nouvel, who designed the new Philharmonie de Paris concert hall.

Bernard Byk, co-founder and CEO of Amadeus, says, “Imagine a reference sound system with exceptional design, ergonomics and acoustics, as a kind of consecration! Jean Nouvel’s imagination, exuberance and creative genius, combined with Michel Deluc’s engineering, brought a brilliant solution to life. Amadeus especially praises tradition, and the new speakers combine innovation as well as timeless beauty; christened 'Philharmonia', they embody the know-how, the creativity, and the values with which Amadeus has been building its history for more than 35 years.” 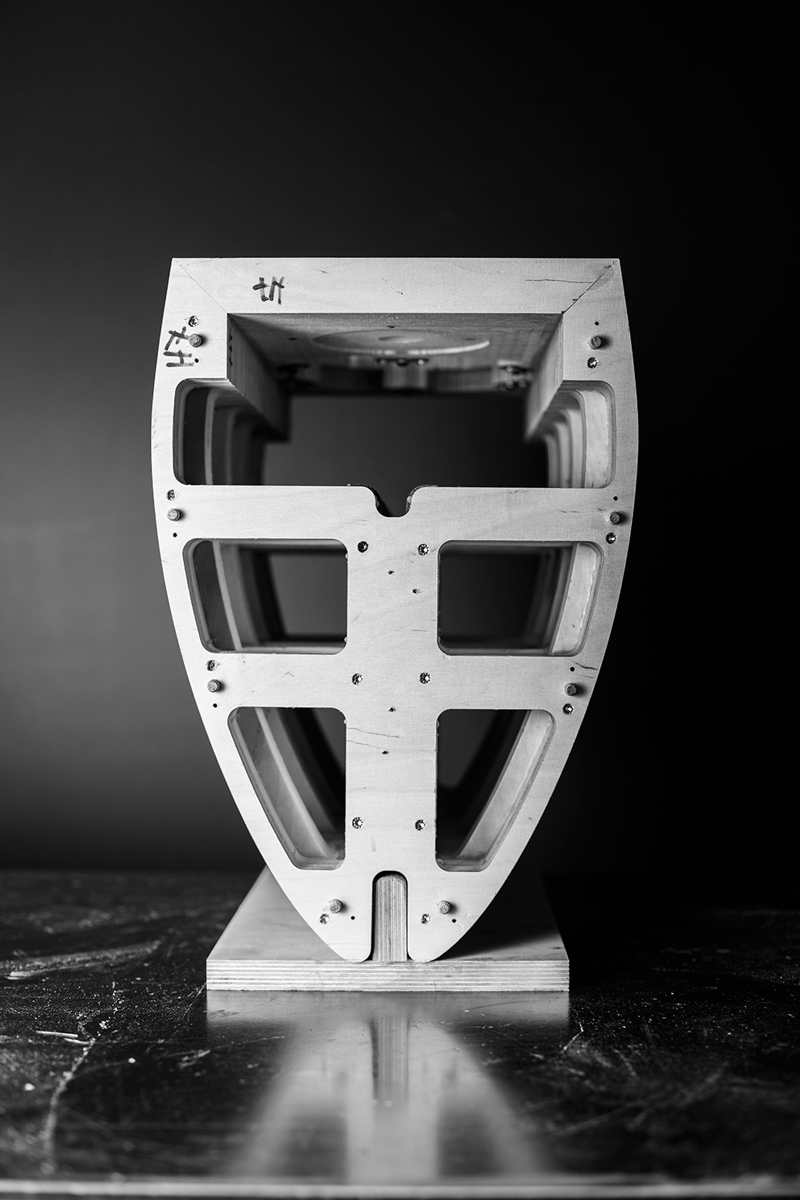 “This allows a dramatic decrease in sound coloration through a crossed structure of longitudinal and trans-verse reinforcements. This proprietary technique is in part inspired by Amadeus-designed professional Mains monitoring systems used in large recording studios, the 'crossed structure' itself drawing on aircraft manufacturing processes, particularly wing design,” continues Deluc.

Philharmonia was born from the prestigious legacy of Amadeus in the professional audio world over the last 25 years. The Company’s users include some of the greatest sound engineers, mixers and producers in France and around the world. 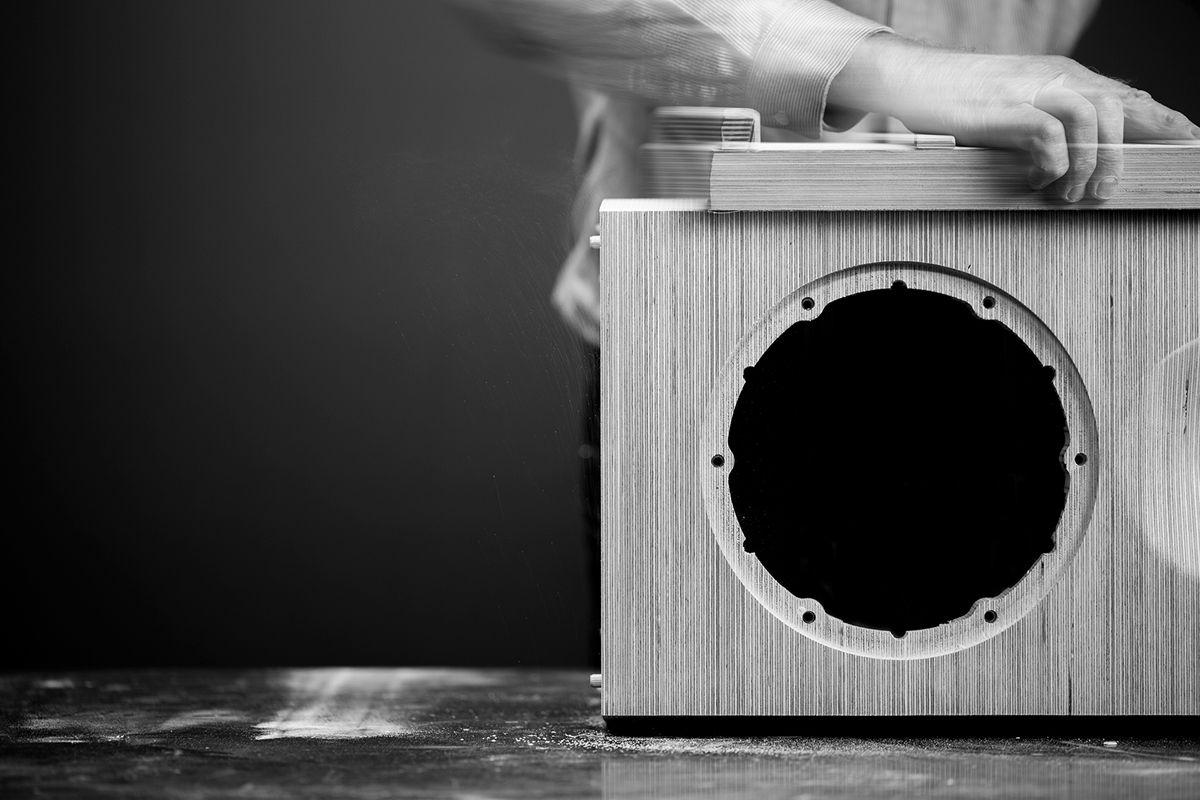 Gaetan Byk, Marketing Manager at Amadeus, continues describing the genesis of the Philharmonia speakers: “This project, under the direction of Jean Nouvel, is the result of a unique collaboration between professionals with talents, sensitivities and careers, both original and complementary. They have achieved a stunning look as well as a transparent sound with Philharmonia. We have been pursuing this quest for the ultimate timbral neutrality, along with musicians, recording engineers and artists who use our products, for a very long time. The process of technological reflection at Amadeus was led by the needs and demands of the leading sound engineers who will work in the studios of the Philharmonie de Paris.” 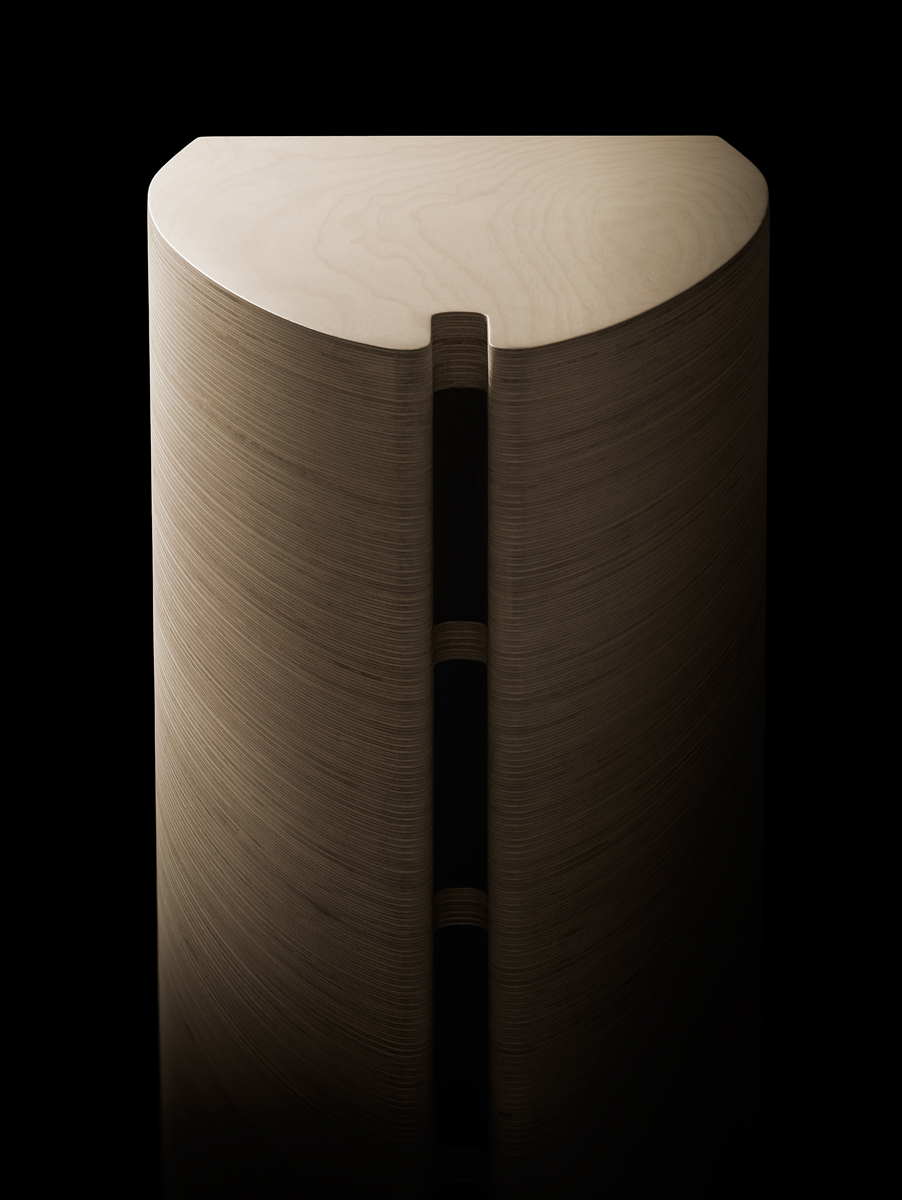 The new Philharmonia 2-way, self-powered speakers feature a 28-mm soft-domed tweeter and a custom 8-inch woofer, and boast analog and digital inputs with a customized integrated DAC and an amplitude linearity range (±2dB) from 43 Hz to 22 KHz. The high-frequency driver features very low dielectric losses and high thermal conductivity, loaded behind a fast exponential waveguide machined in wood, which yields exceptional control over spatial dispersion. The cabinets are custom manufactured from layered Birch and stand 1.6 meters tall, the casing contains the electronics inside the lower part of the speaker enclosure. Machined into the wood material along the full height of the speaker system, the very low velocity port yields optimal linearity for the lowest possible distortion.

Philharmonia is bi-amplified using two dedicated very high resonance digital custom-built amplifiers, each amp delivers 700 Watts under 8 ohms. These proprietary PPM-PWM fixed frequency class-D amplifiers are equipped with a high-efficiency switched mode power supply. Each speaker channel is under control by a powerful, 64-bit digital processing unit capable of a 118 dB dynamic range. Each of these on-board DSP units include a module dedicated to managing core system parameters including system EQ, time alignment between sections, limiting, transducer thermal protection. This level of control makes Philharmonia fully protected and able to operate at the full extent of its abilities.

With line-level XLR analog input, Philharmonia lets users choose their own DAC, while at the same time, given that digital-to-analog conversion should happen at the latest possible stage in an electro-acoustical monitoring system, Philharmonia also integrates two digital inputs/outputs conforming to the AES3 digital audio data transfer standard. These are coupled with a high-resolution 24-bit/96kHz converter placed as close as possible to the electronic amplifiers, thus working together in perfect combination. The speakers also feature an RJ-45 network input allowing remote control of its DSP processor for optimal adjustment via dedicated software to match the speakers to the acoustical properties of each listening space. The software is an app that runs on Apple Macintosh and iPad, and Microsoft Windows computers. 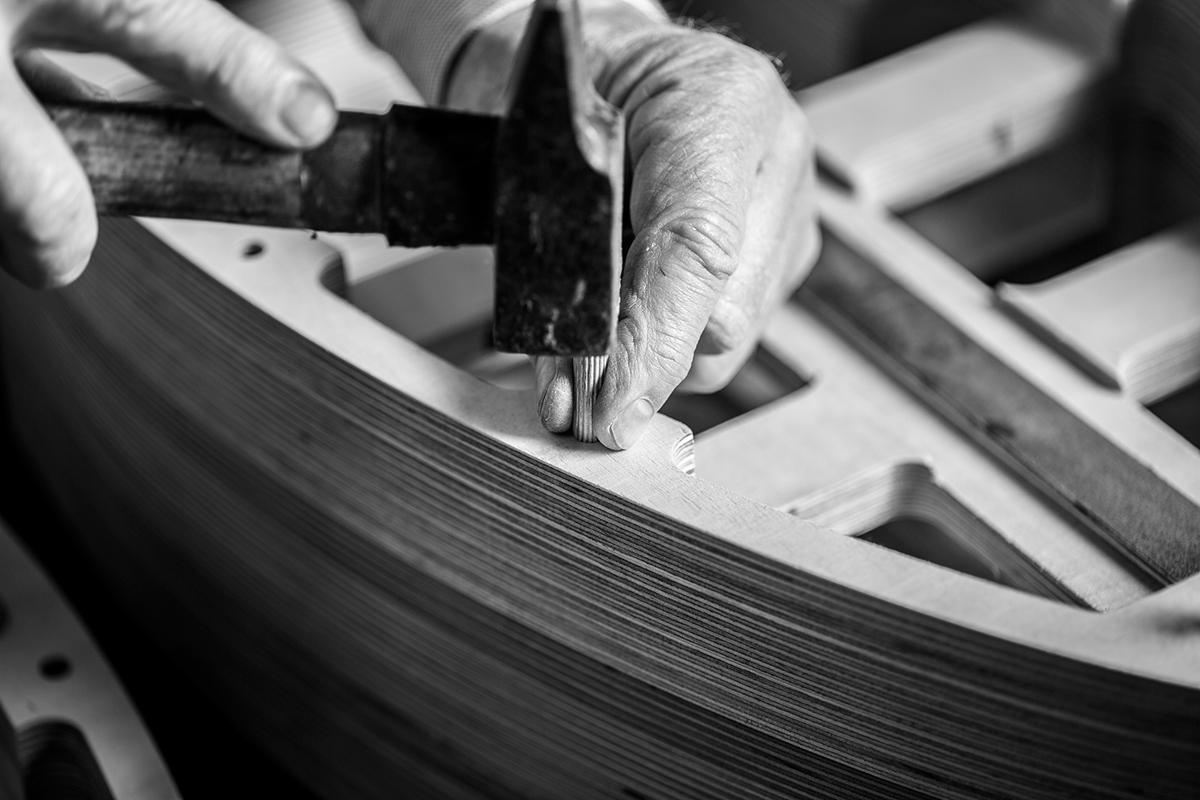 As always, a huge part of speaker design is the components. “They have been carefully selected, evaluated, listened to, and combined,” explains Michel Deluc. “The amplifier includes a built-in DSP module, with digital filtering functions such as system EQ, time alignment between HF and LF sections, limiter parameters, thermal protection of the transducers, and more.” He adds a personal note about the low-frequency port, “The aerodynamics of Philharmonia’s tuning ports is a masterpiece. It has been largely empirical, inspired by aesthetic aspects, and based on hybrid low-velocity laminar ports using progressive termination. This leads to a rather complex and major technological innovation, whose theory is still in its infancy.”

About Jean Nouvel
The architect Jean Nouvel has won many top awards for his work including the Aga Khan Award for Architecture for the Institut du Monde Arabe (1989); the Gold Medal of the Royal Institute of British Architects (2001); the Wolf Prize in Arts (2005); and the Pritzker Prize (2008). A selected list of his works include the Arab World Institute, Paris; Lyon Opera House; Cartier Foundation, Paris; Lucerne Culture and Congress Center; Dentsu Tower, Tokyo; Museum of Archaeology, Périgueux; Guthrie Theater, Minneapolis, and the recently opened “Philharmonie de Paris” where Amadeus worked with the renowned architect on the Company's newest speakers, the Philharmonia.
www.philharmoniabyjeannouvel.com | www.amadeusaudio.fr
related items