The Audio Engineering Society is striving to bring back its European conventions to the audio industry’s agenda, focusing on the promotion of the latest in audio research, developments and technologies. For 2016, the AES has confirmed its 140th International Convention will return to Paris, France.
The Audio Engineering Society (AES) announces its return to Paris, France, for the upcoming AES 140th International Convention, taking place June 4–7, 2016. The AES140 “Call for Papers” and other deadlines are to be announced in the coming months as the AES prepares for its next European Convention. 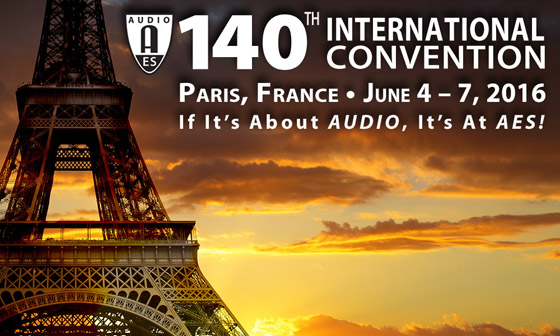 The 140th AES Convention will bring together leading audio engineers, producers, educators, and more from around the world to present the latest in audio research, developments, and technologies. Additionally, the convention’s four days of Tech Program events and three days of Manufacturer Exhibits and Project Studio Expo presentations are set to provide a diverse range of opportunities for attendees to learn from, and network with, the top names in the industry.

“We’re excited to return to Paris, one of the world’s great cities, to explore the latest in audio technology, best practices, and tools. Manufacturers have been lobbying for us to bring our pro audio exhibition to this underserved region of Europe, and we’re imagining all kinds of fun things we can do in this fantastic city. Our last few conventions in Europe have been very successful, and we think Paris will continue the upward trend. And the Paris convention/hotel community seems very eager to host us, so we are confident this will be a very successful show for the pro audio community.”

The AES was formed in 1948 and now counts more than 14,000 members throughout the US, Latin America, Europe, Japan, and the Far East. The organization serves as the pivotal force in the exchange and dissemination of technical information for the industry. Currently, its members are affiliated with more than 75 AES professional sections and more than 95 AES student sections around the world. Section activities may include guest speakers, technical tours, demonstrations and social functions. Through local AES section events, members experience valuable opportunities for professional networking and personal growth.
www.aes.org
related items