In its August 2020 edition, Voice Coil featured an article by experienced speaker designer Igor Levitsky on The Advantages of Thin-Film High-Frequency Transducers. In a follow-up Spotlight article the author returns to expand on the development and design aspects of the Radian Audio LT2/LT6 Ribbon Planar transducers - its more recent, commercially available project, in which he continues to be involved. This article was originally published in Voice Coil, September 2020.
In the first part of this article series, I reviewed the benefits of thin-film high-frequency transducers. In this second part, I will discuss the detailed design aspects of the Radian Audio Engineering LT2/LT6 ribbon transducers and their specific advantages. 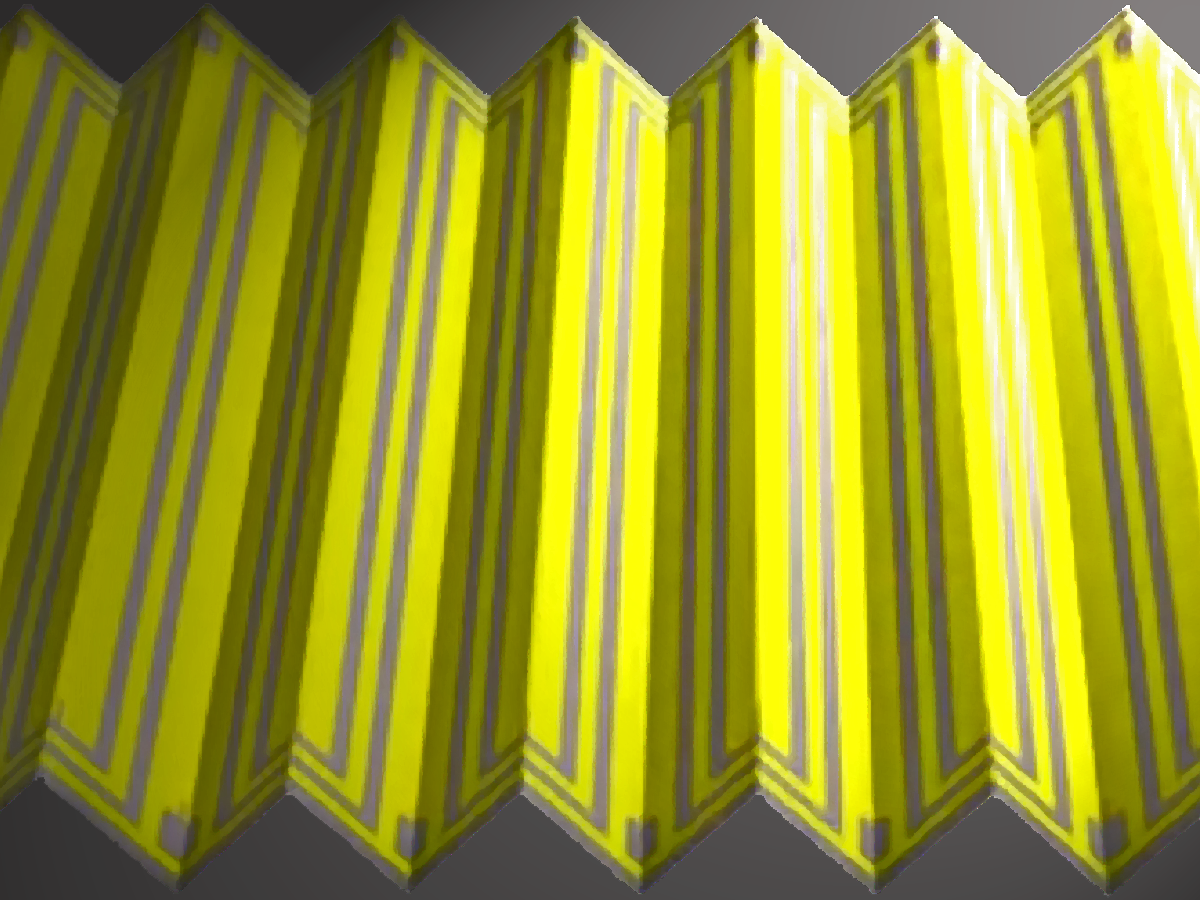 At the heart of Radian’s planar ribbon technology lays a symmetric push-pull, FEA-optimized magnetic structure based on very high MGO energy neodymium magnets with very even magnetic flux distribution. A lot of care has been applied to the metal parts design to minimize stray flux, maximize efficiency, and reduce and even eliminate distortion related to magnetic structure.

Special focus has been given to the mechanical design to ensure dimensional stability, longevity, and toughness of the drivers for demanding applications (e.g., pro, portable PA, and outdoor). The weather-resistant design was especially challenging. It was tested and proven during more than 700 hours of direct salt spray baths — enabling use of Radian drivers in the most challenging outdoor applications.

Planar Ribbon Technology
The advantage of planar ribbon technology is that conductors are subjected to magnetic flux lines evenly along their length without any discontinuities (as in air motion transformers or AMTs). Yet another major advantage is that the entire motor/diaphragm system is ideally symmetric.

The magnetic system design is fully symmetric with an identical mirror-image magnet/metal construction. The magnetic flux distribution is fully symmetric. A diaphragm with conductors is disposed in the magnetic field along its symmetry line. The diaphragm itself is flat and precisely tensioned, which provides ideal symmetry for its mechanical compliance. Going further, we should look at the symmetry of the adjacent mechanical structure that affects radiation impedance of very thin diaphragms. Radian drivers have symmetric structure, and hence, the diaphragm has a symmetric acoustic load. This is especially true in an open-back configuration (without a back cup or rear enclosure), which creates almost an ideal dipole source.

In other words, if we draw an analogy, planar ribbon drivers can be paralleled to Class A-amplifiers with ideal symmetry and linearity. The most important part is the diaphragm. Depending on the design goals, either a Kapton/polyimide or a polyethylene naphthalate (PEN) diaphragm construction is used—each is unique and possesses the highest temperature rating and reliability. We developed proprietary designs and assembly processes that ensure consistent tensioning of the diaphragm from unit to unit.

Over many years, we researched various aspects of the planar ribbon driver’s operation and found solutions for problems that have been typical for ribbon drivers in the past. We solved them. Not only do we know about the consistency, reliability, toughness, and environmental stability, but we also learned a great deal about distortion and the ways to eliminate some of them and reduce others below the hearing threshold at normal listening levels.

There are many intricate details that we cannot discuss, but there are also six patents and several pending patents that back up our claims and expertise in this technology.

Planar Ribbon Drivers vs. Traditional Drivers
Let’s look more closely at how Radian planar-ribbon drivers compare with traditional drivers, their differences, and their effects on sound quality. Figure 3 shows a basic motor and moving system for a traditional electro-dynamic dome tweeter, which is technically the same for all voice coil drivers. The concept of a nonlinear model, the terms, the parameters, and the root cause analysis for electrodynamic drivers with a voice coil are shown in Table 1. The table was taken from Wolfgang Klippel’s papers and other presentations mentioned in the References listed in the first part of the article published in Voice Coil, August 2020. The column on the right in Table 1 is the result of our 35 years of research, development, and production experience with planar ribbon technology both for loudspeakers and headphones.

The comparative analysis of nonlinearities shown in Table 1 is based on inherent design aspects of transducers in general. Some traditional mid- and high-frequency drivers with sufficient budget and very elaborate designs and materials have significantly reduced effects of many distortion inducing factors. However, even if we put the costs of such devices aside, even when they succeed in mitigating some of the issues, the underlying mechanisms are still present — despite any design efforts and money spent—since they are defined by the nature of such transducers.

It is technically impossible to remove the effects of inductance modulation if we have a voice coil with 100 turns of wire immersed into an asymmetric magnetic system. It is impossible to remove distortion generated by break-up modes of a cone or dome structure or magnetic flux modulation since it will always be present—albeit at a lower level in better designs.

Planar ribbon drivers do not have to “struggle” with these limitations. They simply take a shorter and more “direct drive” to great sound quality. In fact, many of those problems do not exist in planar ribbon drivers. Inductance is negligible, there is no flux modulation, and the system is fully symmetric (analogy to Class-A amplifiers). Therefore, such drivers simply do not have distortion—generating mechanisms that are present in traditional designs with cylindrical voice coil moving in magnetic gap.

Is a planar ribbon driver an ideal transducer technology? No, it isn’t. There is such thing as a plasma tweeter or an ionophone (based on plasma modulation) that may just compete with planar ribbons, especially in some high-frequency sound attributes, and some cases outperform it. But if we remain in a practical world, there is no mid- or high-frequency transducer technology that does so many things right.

In some applications, where very high output is required, such as large-scale pro installations and large sound reinforcement systems, there is no substitution for compression drivers. Some of the best ones, especially with beryllium diaphragms are exceptionally good. However, when absolutely maximum output is not the main goal, or cost is not a limitation, there are no other applications where modern planar ribbons would not surpass any other technology.

In Summary
Here is a summary of the advantages of planar ribbon technology over traditional drivers in more practical terms. In Planar Ribbon Drivers:
• Driving force directly acts on the diaphragm—purest minimalistic way of energy transfer—freedom from resonances, mechanical filtering, and transmission delay and losses.
• Driving force is evenly distributed over the radiating surface of the diaphragm—near ideal condition for sound radiation — no abrupt break-up resonances, no transmission delay, and no wave cancellation.
• The mass of the diaphragm compares to the mass of air load (volume) vibrating along with the diaphragm, thus creating ideal coupling conditions for sound energy transfer, effective and lossless damping, accurate impulse response, and providing very high sensitivity and output extension up to 40 kHz.
• Purely resistive impedance virtually free from inductive component — ideal and easy load for an amplifier and crossover network, no crossover network resonance in a stop band, no phase shifts and excessive group delay, and no high-frequency losses.
• Negligible inductance Le(x,i) in planar ribbon driver does not generate nonlinearities inherent for conventional drivers that have voice coils with high inductance.
• Flat radiating surface—ideal shape for sound radiation, does not change with frequency—results in even and coherent wave front, even dispersion, no wave cancellations, no signal delays, no obstructions or cavity resonances.

A future article may be directed toward practical comparative tests in highly controlled conditions of some typical transducer types in order to demonstrate the above statements (even though it is a very challenging task). VC

Searching for a Unicorn Part 2: Generating a Good Signal Source