Where do tubes come from? In this article Richard Honeycutt revisits the history of tube electronics, from its early invention to the widespread adoption in radios and television receivers. And because familiarity simplifies tube selection, the article explains where some of the most common tube types can be applied in todays designs on power amplifiers and pre-amplifiers and tube stages. This article was originally published in audioXpress, April 2013 as part of the Hollow-State Electronics monthly column by Richard Honeycutt.
The first hollow-state component was one of Thomas Edison’s light bulbs with an extra metal support structure inside. Edison noticed that a small current flowed from the filament to this structure. John Ambrose Fleming saw the potential usefulness of the “Edison effect,” and created the “Fleming valve,” the first hollow-state diode, which was used to detect radio signals. 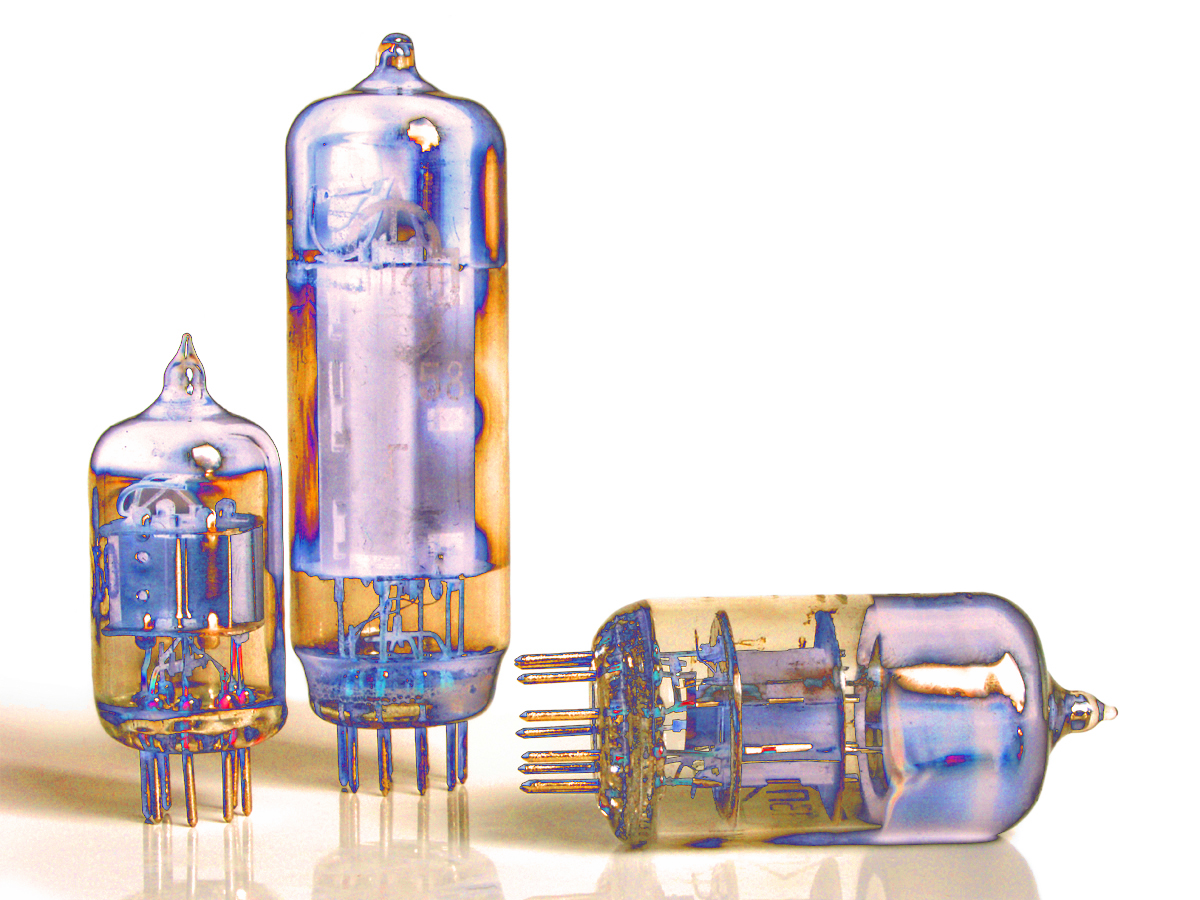 Whether Fleming went on to develop a triode or whether Lee De Forest did that is a matter for debate. Certainly, De Forest was responsible for the early commercialization of the “Audion” triode. This device, which resembled a light bulb with what was later called a “grid cap,” was used to detect radio signals. It was much more sensitive than the Fleming valve for that application. By the 1920s, De Forest had sold his patent for the Audion to AT&T, and vacuum triodes were being manufactured by several companies.

The earliest model, and one of the most popular, was the model 01. This low-μ tube (with an amplification factor, or μ, of about 10) had a 5-V filament that drew 250 mA. By this time, the tube’s envelope had been standardized as a glass envelope with no grid cap and with a four-pin base providing two pins for the filament/cathode, one for the plate, and one for the control grid (see Photo 1).

Early Tube Development
The early market for vacuum tubes included broadcast, commercial, and military radio receivers. AT&T and other companies also used them for amplifiers in transcontinental telephone cable service. Also, RCA and Western Electric used them in motion-picture theaters. Over the years, the tubes gradually became smaller and other base designs appeared. Photo 2 shows the interior of a 1924 Atwater Kent AM radio receiver. Photo 3 shows a 1939 Philco table radio. Note that as radio design developed, the size of the sets decreased.

By the late 1940s and early 1950s, AM radio receivers had standardized to a five-tube design, often called the “All American Five.” This design used a hollow-state rectifier (e.g., a 35W4) and an oscillator/mixer (called a “converter” — perhaps a 12BE6) to convert the modulated radio frequency signal to an intermediate frequency (IF) — usually 455 kHz. It also used an IF amplifier (usually a pentode, e.g., a 12BA6), a detector/amplifier such as a 12AV6 that contained both a diode and a triode, and a single-ended power amplifier that was usually a power pentode or beam power tube such as a 50C5. These sets abandoned the earlier quest for quality sound in favor of low manufacturing costs. In fact, Arthur Atwater Kent, one of the foremost radio manufacturers of the 1920s, chose to go out of business rather than try to compete with these “midget” designs.

Since the “All American Five” sets didn’t use a power transformer, they could be powered from either AC or DC mains, a convenient feature in those days because some locations used a DC power grid. The disadvantage was that when they were powered
from AC lines, the chassis could be “hot” at 115 VAC, presenting an electrocution hazard. Because of the ubiquitous hot chassis designs, tube manufacturers created many tubes with odd filament voltages (e.g., 21, 26, 33, 38 ... up to 117 V).

The commercialization of television in the 1950s led to a proliferation of new tube types, since a typical TV could contain upward of 20 tubes. The 1973 RCA Receiving Tube Manual contained 45 pages of then-current tube data — with an average of one tube’s data per page — plus a seven-page chart of abbreviated data containing approximately 30 discontinued types of tubes per page. When I purchased my first tube manual in 1966 and started looking inside, it was like drinking from a fire hydrant. I eventually discovered that most of the listed tubes were only used for televisions, and therefore were of interest to me only when I needed data during a repair adventure. I was more interested in old AM radios, partially because of their beautifully crafted furniture cabinets, and partially because of their superior audio quality when compared to what was available from the 1960s consumer-grade receivers. (Measurements I took in the 1980s revealed that my 1939 Philco AM receiver had far better frequency response than a 1970s-vintage home-stereo receiver’s AM section!) But mostly I was interested in audio amplifiers.

Audio Amplifier Tubes
Thus, my specific interest greatly reduced the number of tubes with which I needed any real familiarity. Today, a hollow-state circuits aficionado usually finds relatively few models of tubes to be of importance. For example, let’s first look at audio preamplifier tubes. These can be segregated into triodes and pentodes. By far the most popular of the triodes is the 12A*7 family, including the 12AT7 and 12AX7 high-μ dual triodes and the 12AU7 and 12AY7 medium-μ factor dual triodes. (There was also a 12AZ7 high-μ dual triode, but that one is little-used today.) All these tubes have a nine-pin miniature envelope and the same pinout (see Figure 1).

They have 12.6-V filaments and draw 0.15 A. The filaments are center-tapped and the two sections can be fed in parallel, running on 6.3 V at 0.3 A. The tubes of the 12A*7 family differ primarily in their amplification factor or μ.

The most common of these dual triodes is the 12AX7, which has an μ of 100. This tube is also known by its European model number, ECC83. The 7025 tube is a 12AX7 with a controlled noise and hum characteristic. Since there is some normal manufacturing variation in the μ of tubes of the same model, some vendors separate them into groups according to the “sound” they will produce in an amplifier. Mostly these vendors target guitar amplifier users describing the tubes in terms such as “hot,” “aggressive,” “smooth,” and so forth. Naturally, a higher-gain tube will be easier to drive into distortion than a lower-gain tube. And some models are described as having lower noise and microphonics (i.e., the tendency for tubes to produce a “ping” sound in an amplifier’s output when tapped or bumped). One well-known supplier offers a 7025 plus six different models of the 12AX7. This tube is pretty much the standard audio preamplifier tube of the dual-triode class.

The 12AU7 was the standard dual-triode amplifier in electronic measuring instruments (e.g., vacuum tube voltmeters and oscilloscopes). It has a medium μ of about 20. The 12AY7 also has a medium μ, but in its case, “medium” is 40. The 12AY7 is not commonly used today.
Industrial Tubes
A variety of military/industrial tube models were developed for use in mission-critical applications or applications in which the tubes are subject to vibration. These can be substituted for the standard consumer models, and will operate properly in the circuit. They may or may not perform better or outlast the consumer model tube. See Table 1 for examples of industrial replacements for the 12A*7 group.

Octal-type dual triodes are available that perform similarly to the 12AX7 and the 12AU7. These are the 6SN7 and the 6SL7, respectively, plus their 12-V cousins, the 12SN7 and the 12SL7. The octal tubes have been manufactured in glass and metal envelopes (see Photo 4), the latter providing the advantage of internal shielding against hum induced from outside the tube.

An excellent old-timer for audio preamps is the 6AU6 and its 3-, 4-, and 12-V cousins the 3AU6, the 4AU6, and the 12AU6. The 6AU6 is a seven-pin miniature tube having a transconductance of 5,200 microsiemens (μS) when used with a 150-V plate supply. The 7543 is an identical tube except that it has a controlled hum characteristic. The 6HS6 is another seven-pin miniature pentode that matches the pinout of a 6AU6, but it has a 9,500-μS transconductance with a 150-V plate supply. The 5879 is a nine-pin miniature pentode with a lower transconductance (1,000 μS with a 250-V plate supply).
One other preamplifier tube was popular in home-audio amplifiers of the late pre-solid-state era: the 7199 combination medium-μ triode/sharp-cutoff pentode. This nine-pin tube contained a triode with a μ of 17 and a pentode with a transconductance of 7,000 μS when used with a 220-V plate supply. A typical application of the 7199 used the pentode section as the preamp, and the triode section as the phase splitter of a push-pull audio power amplifier. It was also used as the first stage (triode) and second stage (pentode) of some models of Kay guitar amplifiers.

If you decide to swap preamp tubes around in some of your equipment, the 12A*7 family is mostly interchangeable except that you should remember the 12AT7’s higher plate dissipation rating, and not replace it with any of the other 12A*7 family in positions where you may require higher output current. Also, remember that a lower-gain tube will sound quieter at the same volume control setting, and it will produce a cleaner sound in a guitar amplifier than will a high-gain tube. aX

This article was originally published in audioXpress, April 2013 as part of the Hollow-State Electronics monthly column by Richard Honeycutt.
related items