Simulation software for speaker design has been around since the 1970s. With the introduction of the IBM PC and DOS operating system in the early 1980s, Thiele-Small (T-S) simulation software for enclosure design became a must-have for speaker system designers. For the most sophisticated design efforts, there are now magnetic circuit design software and finite element analysis (FEA) cone and thermal prediction simulation software. This article was originally published in Voice Coil, March 2017.
Simulation software for speaker design has been around since the 1970s. Back then some programs ran on Hewlett-Packard scientific calculators, other software ran on the TRS 80 (RadioShack), and there were many popular programs on the Apple II. Early software was based on SPICE electrical circuit analogy programs for predicting speaker response in various enclosure tuning with variables for box volume, sealed or ported, and various port tunings. Essentially the speaker and the enclosure alignments followed electrical filter characteristics. 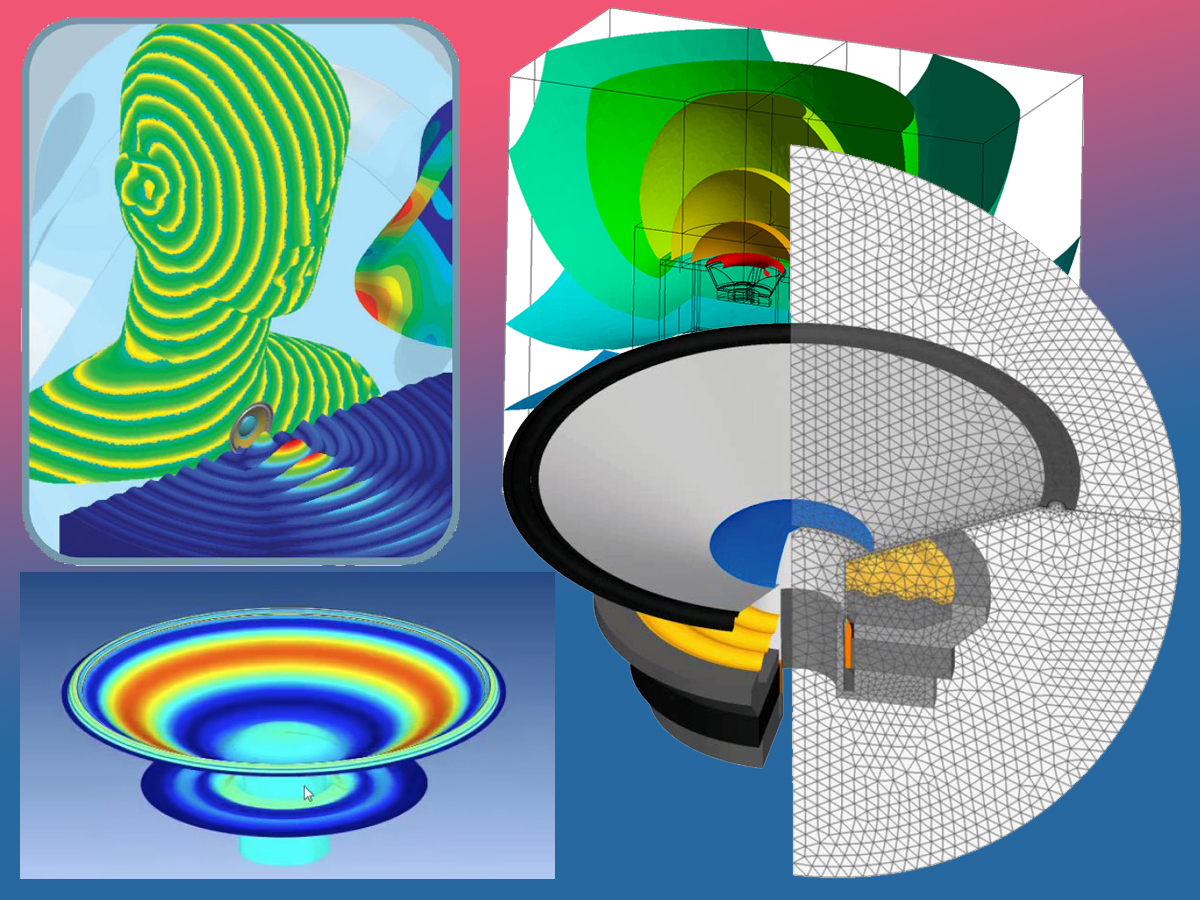 For the most sophisticated design efforts, there are now magnetic circuit design software and finite element analysis (FEA) cone and thermal prediction simulation software. And, the speaker industry has the popular LOUDSOFT FINE series of software simulation programs that include acoustics, crossover design, cone/diaphragm, magnetics, and thermal modeling.

Although LOUDSOFT’s simulation software is well known in our industry, in military and industrial engineering, the leading and most sophisticated simulation software are ANSYS and COMSOL. (ANSYS was founded in 1970 and has nearly 3,000 employees.) These programs are used to predict how something will react to real-world forces, vibration, heat, fluid flow, and other physical effects. FEA can predict whether a part or assembly will break, wear out, or hopefully work the way it was intended. FEA techniques work by breaking down a component into a number of finite elements (e.g., little cubes). Mathematical equations help predict the behavior of each element. A computer then adds up all the individual behaviors to predict the behavior of the part.

FEA can be used to predict the behavior of a part or assembly due to mechanical stress, vibration, fatigue, heat transfer, and even fluid flow (e.g., ferrofluid in the voice coil gap or turbulent air noise in a vent). These programs are characterized as Multiphysics. Multiphysics performs simulations that involve multiple physical models or multiple simultaneous physical phenomena. For example, combining chemical kinetics and fluid mechanics or combining finite elements with molecular dynamics.

How ANSYS and COMSOL Differ
ANSYS was founded in 1970 to develop and market FEA software for structural physics that could simulate static (stationary), dynamic (moving), and thermal (heat transfer) problems. ANSYS is the incumbent and widely accepted industrial standard FEA tool. Cost is dependent on workstations using the software, how many modules, and other factors, but expect to spend $15,000 or more along with annual fees.

COMSOL was founded in 1986 and features a great deal of flexibility when dealing with any physical problems. Additionally, COMSOL provides training seminars on electro-acoustical applications — from transducers to speaker system design to highly specialized work such as micro-electrical-mechanical system (MEMS) microphone designs to headphone ear coupler models.

COMSOL Conference
Many Association of Loudspeaker Manufacturing and Acoustics (ALMA) International members participated in a COMSOL loudspeaker webinar on December 7, 2016. The webinar was specifically designed to teach participants how to use COMSOL’s Multiphysics software to design and characterize loudspeaker drivers and enclosures as well as listening environments.

The webinar discussion included computing quantities such as acoustic and electric impedance and sound pressure level (SPL) in the near and far field, post-processing tools (e.g., beamwidth directivity plots), a detailed electromagnetic analysis of a loudspeaker driver, and an acoustic-structure interaction study of its mechanical and acoustic performance.

The webinar information also described how parts of the driver can be lumped and modeled by their T-S parameters as well as how to model the driver inside an enclosure to see how that influences its sound output. COMSOL has many modules, not all of them relevant to loudspeaker engineering, yet even with just the key elements expect to spend $15,000. The base software for Multiphysics is $10,000 and the COMSOL server license is $1,000 per year. You need both before adding specific function software modules (e.g., the Acoustics module), which will add $7,000 plus an annual license cost of $700. COMSOL is often described as more user friendly compared to ANSYS. COMSOL also provides more tools and has many models available.

Personal Experience
Over the years in my consulting work, I rarely came across design challenges that required FEA analysis, usually just some simple enclosure turning or crossover software would do the job. But more recently, projects such as smartphones and earphones require greater analysis. Specifically, the microphone port holes are more complex than you might think.

At first glance the microphone is behind a hole in the case. But in smartphones, the port hole has multiple functions and requirements—keeping out the wind and minimizing the electro-static discharge (ESD) from the outside world that gets into the circuit components through the microphone. The Helmholtz tuning of the port also helps peak up the response on older designs at around 3 kHz to compensate for the many low-pass (3 kHz) filters through the communications system.

Acoustic mesh adds acoustic impedance and is positioned at the front of the microphone port hole to prevent wind turbulence from entering this aperture, as well as block water (assuming the mesh is hydrophobic). It is simple to just follow prior “best practices” and keep these dimensions to the known entities, but those days are over. Now we have “super wide band” standards out to 14 kHz and the next generation of smartphones will have the Enhanced Voice Services (EVS) codecs for super clean and extended response.

The most recent generation of smartphones typically had response to 8 kHz with the mic port peaking at this point and dropping afterward—often along with some parasitic “organ pipe resonances.” Unfortunately, calculation of the port is no simple matter since we have some loosely coupled chambers, not to mention various changing dimensions of the port entry, one or more diameters for the vent, and the microphone opening dimensions.

An even more tortuous path is typical in the output of the smartphone speakers, often exiting sideways through slits. This is the work that requires FEA. Another use for FEA is sports/fitness earphones in which the bio-sensor (for heart rate, body temperature, etc.) occupies the space where the earphone driver is typically, so the acoustic output of the front of the driver has an asymmetrical and bent path out of the sound tube (which holds the eartip) and on into the ear. This sort of acoustical modeling with small geometrical features requires FEA simulation software.

In particular, FEA simulation software is need to determine such effects as thermal conduction and viscous losses that introduce frequency dependent losses and are important when modeling couplings to solids as well as strategies than include coupling thermoacoustics to classical pressure acoustics and lumped models. VC

During the early 1980s, home computers allowed us to write software to design underwater and in-air transducers. Image Acoustics and the government along with others developed software to quickly solve equivalent circuits (lumped models) and plane wave models (cascading matrices). These models were one dimensional. We discovered finite element mechanical modeling using a program “Macniel Schwendler” from MSC Software Corp. This software was a result of a government FEA program called NASTRAN. This opened a world of 3-D design for us, and we actually developed our own FEA software.

When ANSYS introduced its Multiphysics package, we switched and have been using it for more than 25 years. ANSYS has enabled us to model acoustic transducers and actuators especially piezoelectric transducers under loaded conditions (in-water and in-air) and perform structural and thermal analysis. Twenty-five years ago, this was one of the only commercially available FEA programs that would run under Windows but now there are many.

ANSYS (Figure 1) is not for hobbyists or any casual user. We pay yearly licensing fees and have eight licenses in order to use parallel processing (i.e., I run ANSYS using eight processors at once). You can lease or buy a license. Some aspects such as fluid/solid modeling are said to be more complex in ANSYS but results can be more accurate.

COMSOL is a finite element multi-physics program, which has modules that are directly related to certain aspects of design. The latest updates of COMSOL Multiphysics software, COMSOL Server, and COMSOL Client, feature major performance increases and provide up to a 10× speedup for the handling of large models and mesh creation. Figure 4 shows examples of Multiphysics modeling for acoustics modeling COMSOL has an underwater piezoelectric acoustical projector (Tonpilz projector) example that enables users to perform a full acoustical analysis along with structural and coupled thermal analysis. With the program, the dimensions and number of parts can be easily changed. Data is readily available, impedance, pressure response, and even polar plots (beam patterns).

Figure 5 and Figure 6 show transducer modeling in COMSOL Multiphysics, providing an example of loudspeaker design that enables the user to take a sample loudspeaker electromagnetic model and edit the dimensions, voice coil size, inductance, DC resistance, magnetic circuit, and more. The pressure response, electrical data, electromechanical analysis coupling, damping in the spider, surround and Raylie losses, eddy currents, Lorentz forces, and even back electromotive force (EMF) can also be calculated. Figure 7 depicts another feature, showing how the program enables the user to add an enclosure to the driver. In addition, applications can be made to analyze specific parts of the design (e.g., changing dimensions only for size optimization).

In Retrospect
After 25 years of ANSYS, it is hard to say what I would choose if I was new to FEA work. I am tempted to say ANSYS, but I also would consider COMSOL. The bottom line is that ANSYS and COMSOL are two different FEA programs and some engineers prefer one but there are some engineers who use both. VC


About the author
Acoustic FEA modeling expert Alex Butler of Image Acoustics, Inc. Butler, and his father before him, has specialized in FEA simulations for four decades and have numerous patents, Audio Engineering Society (AES) and Acoustical Society of America (ASA) papers, and significant contributions to the field of military “skunk works” acoustics. Over the last 40 years, Image Acoustics has been involved with in-air audio, underwater acoustics, navigation, sonar and communications mainly for the Navy, Department of Defense and commercial contractors.

This article was originally published in Voice Coil, March 2017

Unravelling the Technical Solutions in Waterproofing of Audio Devices

Acoustic Praxis: The Elephant in the Lab