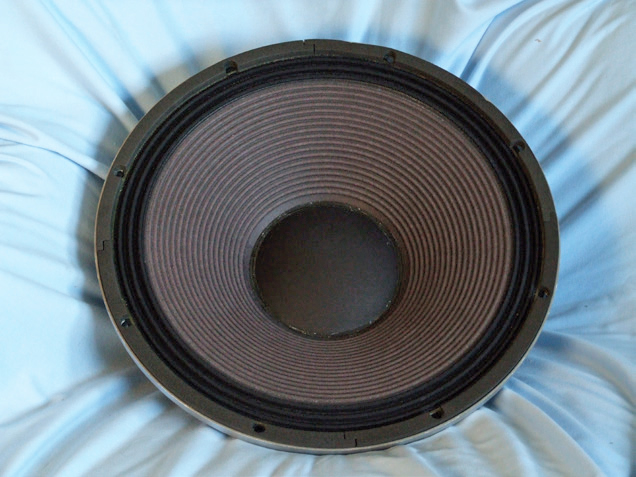 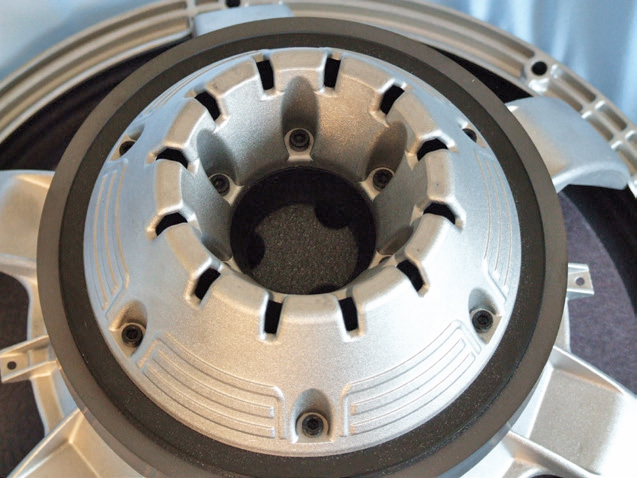 The 18TLW3000’s features are rather substantial and include a proprietary six-spoke cast-aluminum frame that incorporates six 5 mm × 50 mm vents located below the spider mounting shelf. A series of 12 5-mm × 32-mm peripheral vents located in the 2.5” × 6.5” metal cap—bolted to the magnet assembly—plus a foam-damped 1.75” pole vent provide additional forced air cooling. The cone assembly consists of an 18” curvilinear-ribbed fiberglass loaded paper cone with a waterproof coating and a large 6” diameter hard paper dust cap. A three-roll M-shaped coated (sealed) polycotton surround in conjunction with a 7.75” diameter flat treated cloth spiders (damper) with the voice coil lead wires center stitched to the center of the spider provides suspension.

All this is driven by what Eighteen Sound calls a “Tetracoil.” This is dual winding (the 18TLW3000 is a dual gap driver) 4” (100-mm) diameter high-temperature, non-conducting former wound with a two-layer inside/outside round copper wire winding interleaved sandwich voice coil, which Eighteen Sound simply calls an ISV. The voice coil is terminated to a pair of color-coded chrome push terminals.
Examining the 18TLW3000, I immediately noticed a tall metal cap on the back of the motor rather than the usual T-yoke seen in most woofers. This is part of the Tetracoil motor structure (see Figure 1). The dual-gap motor structure uses a single magnet and two front plates in conjunction with twin ISV voice coils wound in opposite directions.

In the Tetracoil design, the flux flowing in the upper gap has an equal flux density but it moves in an opposite direction from the flux flowing across the lower gap. The current flow in the upper voice-coil is equal to but in an opposite direction from the current flowing in the lower voice-coil. It is important to note that the motor structure is perfectly symmetric around the horizontal axis. Consequently, this dual gap, dual-voice coil topology provides an equal Lorentz force in each voice coil with motive force in the same direction.

An important benefit provided by Tetracoil technology is the increase in thermal conductivity. Each gap of the Tetracoil motor structure is equal in area to the gap of a traditional structure. However, the area of direct thermal path contact is doubled (due to the ISV winding), which results in a reduction of thermal resistance. This leads to increased power handling and lower power compression.

Figure 2 compares a single-coil ISV 18” woofer to the dual-coil 18TLW300. Compared to a traditional voice coil with single-gap topology and only an outside former winding, the Tetracoil provides four times the voice-coil-to-steel surface area contact. This corresponds to using a 5.6” diameter voice coil in place of a 4” diameter voice coil. Other benefits of this motor system include symmetrical flux density vs. displacement behavior that minimizes even-order distortion and produces a very symmetrical, flat inductance curve.

To test the 18TLW3000, I clamped the driver to a rigid test fixture in free air at 0.3, 1, 3, 6, 10, 15, 20, and 30 V and used the LinearX LMS and VIBox to produce voltage and admittance (current) curves. Also, note that I use a procedure that attempts to achieve the third time constant on each sweep, which means the LMS oscillator is turned on for a progressively increasing time period between sweeps, generally at a frequency that produces maximum current. Also, following the established Test Bench test protocol, I no longer use a single added-mass measurement. Instead, I used actual measured cone assembly weight, which Eighteen Sound provided at my request.

Next, I post-processed the 16 550-point stepped sine wave sweeps for each sample and divided the voltage curves by the current curves to derive impedance curves, which then were phase calculated. (The LMS is a single-channel analyzer and does not measure phase, but it does have a highly accurate phase proprietary calculation methodology.)

Next, I imported this information along with the accompanying voltage curves, to the LEAP 5 Enclosure Shop software. Obviously, this is a more time-consuming process than the usual low-voltage small-signal impedance curve technique used to derive Thiele-Small (T-S) parameters. I do this because the LEAP 5 LTD transducer model methodology results in a more accurate prediction of excursion at high-voltage levels, which is one of the LEAP 5 software’s real fortes.

Because most T-S data OEM manufacturers provide is produced using either a standard modeling method or the LEAP 4 TSL model, I additionally created a LEAP 4 TSL model using the 1-V free-air curves (see Figure 3). I selected the complete data set, the multiple voltage impedance curves for the LTD model, and the 1-V impedance curves for the TSL model from LEAP 5’s Transducer Derivation menu. Next, I created the parameters for the computer enclosure simulations. Table 1 compares the LEAP 5 LTD, the TSL data, and Eighteen Sound’s factory parameters for both 18TLW3000 samples.

Figure 5 and Figure 6 show the 2.83-V group delay curves and the 61-V excursion curves, respectively). Note the voltage input was limited to 61 V as the XMAX + 15% number was exceeded at about 20 Hz. With a 20-to-25-Hz high pass, this woofer could easily have been driven several decibels louder for the same criteria.

The 18TLW3000’s Klippel analysis produced the Bl(X), KMS(X) and Bl and KMS symmetry range plots shown in Figures 7–10. (The analyzer is provided courtesy of Klippel and Patrick Turnmire, of Redrock Acoustics, performs the testing).

The 18TLW3000’s Bl(X) curve is nicely broad and very symmetrical (see Figure 7). The Bl symmetry plot shows a minor 0.81-mm coil-in offset at the rest position and remains nearly constant out to the driver’s physical XMAX, which is quite good (see Figure 8). Figure 9 and Figure 10 depict the KMS(X) and KMS symmetry range curves for the 18TLW3000. The KMS (X) curve is as also rather symmetrical but with some obvious forward coil-out offset. The KMS symmetry range curve shows the forward offset at a trivial 0.38 mm at rest and stays mostly constant throughout the operating range, decreasing to 0.18 mm at the driver’s physical XMAX.

Figure 11 shows the 18TLW3000’s inductance curve L(X). Inductance typically increases in the rear direction from the zero rest position as the voice coil covers more pole area, unless the driver incorporates a shorting ring. The 18TLW3000 does not use shorting rings, but the unique winding configuration in both gaps yields an inductance variation maximum from both XMAX positions that is less than 0.19 mH, which is very minimal variation for a woofer with this large a motor.

I dispensed with the sound pressure level (SPL) measurements for the 18TLW3000, mostly because I don’t keep 18” or 21” size cabinets in my inventory of test fixtures. However, Figure 12 shows the factory SPL curve. Since I decided not to perform SPL measurements I moved on to the last group of test, which I performed using the Listen SoundCheck AmpConnect analyzer, Listen SC-1 microphone, and SoundConnect power supply (provided courtesy of Listen) to measure distortion. Because I did not have an available enclosure, I did not use Listen’s SoundMap software for time-frequency presentations.

To set up for the distortion measurement, I mounted the woofer rigidly in free air and used a noise stimulus to set the SPL to 104 dB at 1 m. (SoundCheck’s utilities include a software generator and an SPL meter.) Then, I measured the distortion, placing the Listen microphone 10 cm from the dust cap. Figure 13 shows the distortion curves. Eighteen Sound has produced an interesting dual-voice coil design for an extremely robust 18” pro sound woofer used in PA applications. The 18TLW3000 also offers several unique proprietary features.
www.eighteensound.com

This article was originally published in Voice Coil, December 2013.